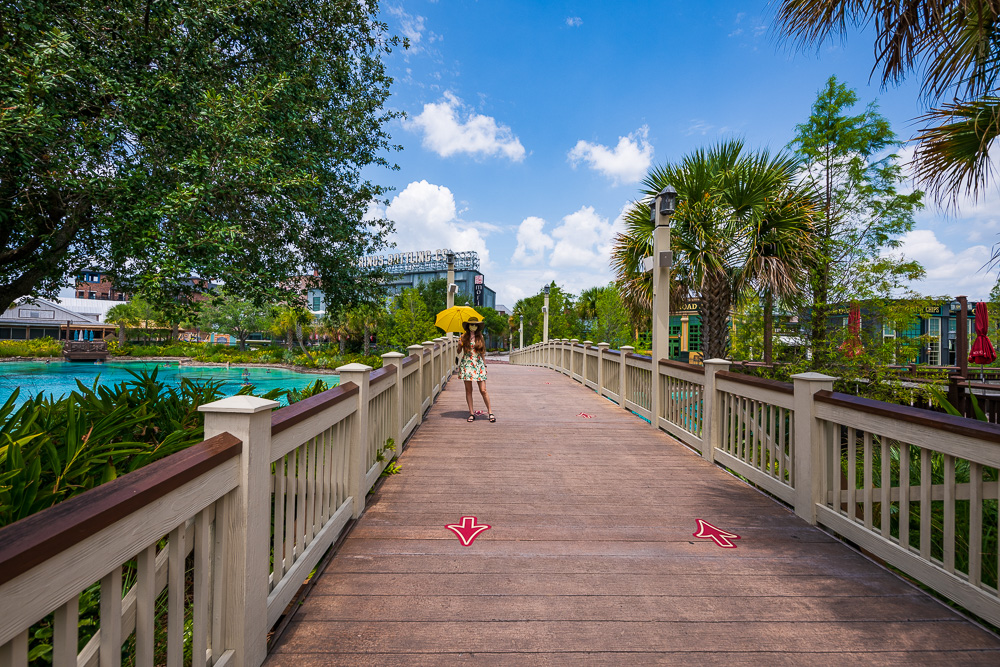 Following reopening day of Disney Springs, we headed back to Walt Disney World for the first time in over two months. It was an odd mix of surreal, normal, apocalyptic, and comforting. You know, all the usual feelings you get when wandering an outdoor mall and dining at a restaurant.

We’re not going to rehash much here, so if you haven’t read our previous posts about the reopening of Disney Springs, here are photos and videos of what you can expect in terms of the temporary health screening & safety requirements. If you do opt to visit, this list covers the 40+ restaurant & retail locations currently open.

In this post, we’ll share photos from our visit to Disney Springs, thoughts on the health screening and safety protocols, our experience dining at the Boathouse, recommendations for visiting, and some commentary about pent-up demand (or lack thereof).

One of the big discussion points thus far has been pent-up demand. We’ve consistently held that this is being over-estimated for Walt Disney World’s theme parks, and that organic demand will likely be below the ~25% cap set by Disney–at least after the first few days.

We were hesitant to say the same about Disney Springs. While it obviously doesn’t have the same appeal or drawing power as the parks, it also has some things going for it. For one, Disney Springs does not charge admission. It also is easier to visit in small doses, making the masks and other requirements more palatable.

In other words, Disney Springs is more like an outdoor mall, restaurant, public park, or beach. In various places around the United States, all of those venues have seen serious crowds upon reopening. We were worried about the same at Disney Springs, which is why our intent was to avoid the opening day and the holiday weekend. 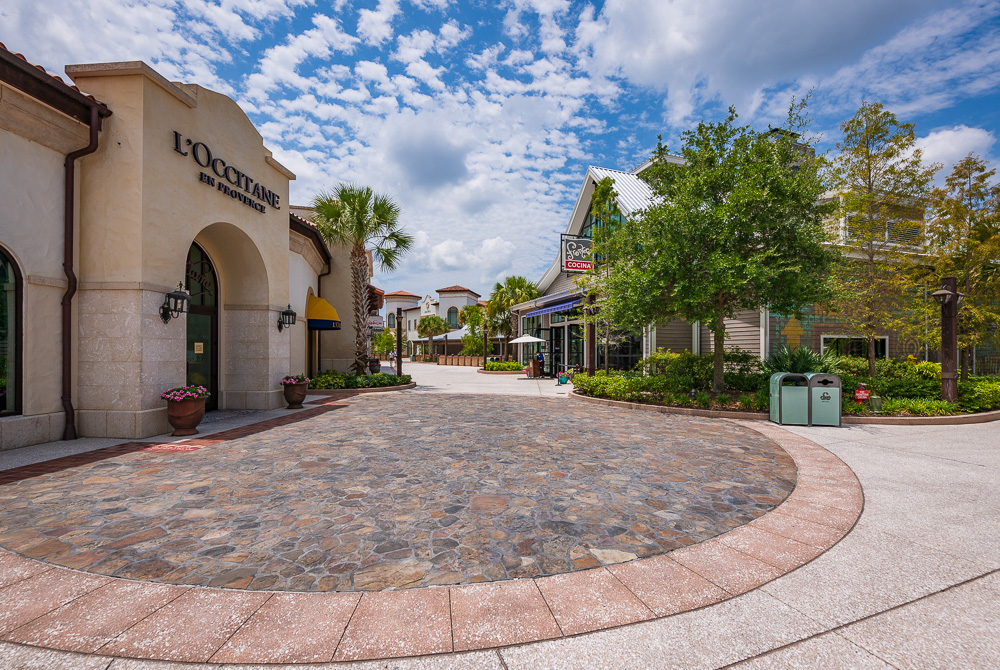 However, the crowds never materialized. This was clear from the get-go, as photos and videos we saw of opening day showed mostly bloggers, vloggers, and diehard hot dog hounds…but few others. Even with those three key demographics, it was hardly busy. Once those groups had their fill, attendance further dropped. It was a veritable ghost town over the weekend.

We’ve already seen some “unsurprised” reactions on social media, with people pointing to the lack of tourists with Walt Disney World closed right now. While that obviously cut into the potential audience pretty significantly, I think vacation-goers underestimate the local appeal of Disney Springs. 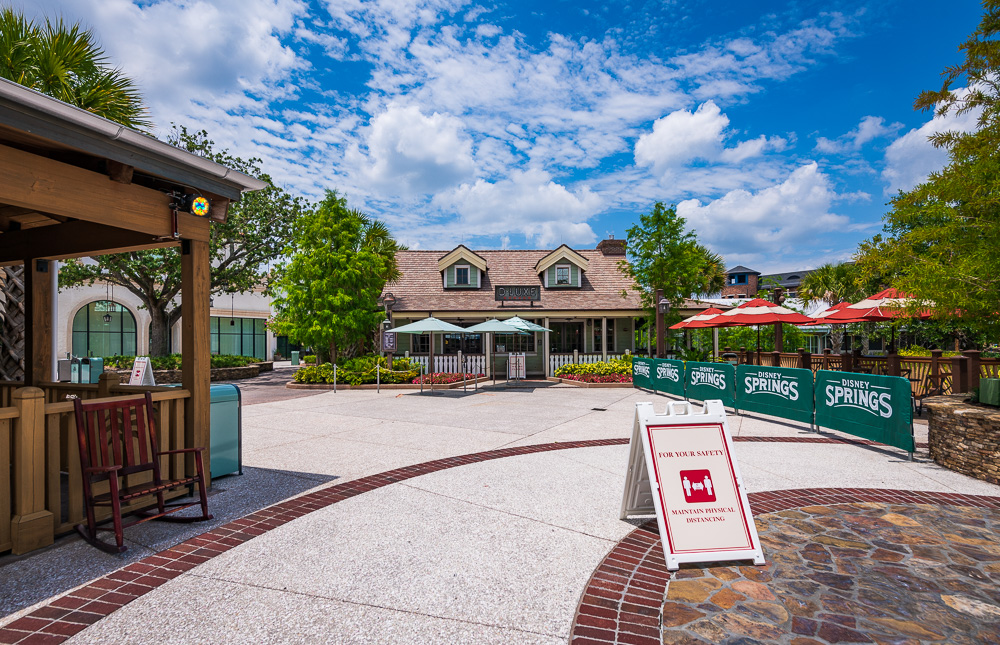 Quite simply, Disney Springs is our closest mall. This is true for a lot of people in Central Florida, and this reality is normally reflected in crowd levels. Disney Springs sees its biggest attendance spikes on weekends and evenings, when locals are off work. Same goes for the entire holiday season, when it’s significantly busier due to locals doing Christmas shopping and meals with family.

For many locals who don’t have Annual Passes, it’s a way to get a Disney fix. For others, it’s a great spot for dinner in a lovely setting. While Disney Springs is absolutely dependent on tourists, it’s also dependent upon locals. Those dozens of restaurants would not be viable without the local audience–tourists are disproportionately eating in the parks, not at Disney Springs. 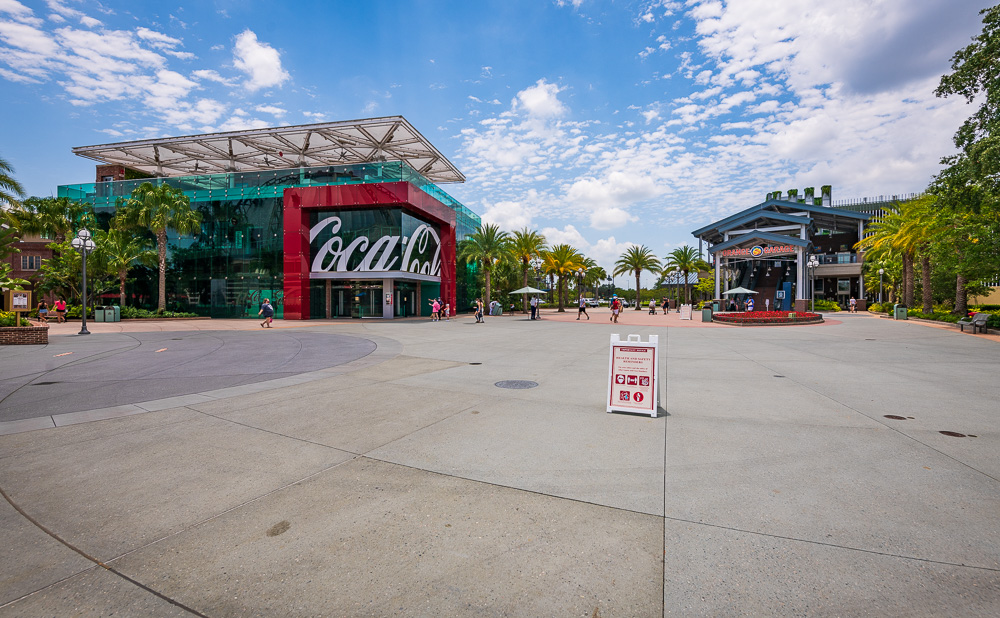 In any case, attendance levels were well below expectations, and likely far too low to sustain the ~40 businesses currently open at Disney Springs. We wouldn’t be surprised to see some of these close again in the coming weeks, and other restaurants scuttle plans to reopen.

There are likely a variety of explanations for the low turnout among locals thus far at Disney Springs. Fears of a “crowdpocalypse” scenario, health & safety concerns, mandatory mask opposition, unemployment levels, economic uncertainty, high heat & humidity, lack of Disney-owned venues operating, and more things I’m probably overlooking. We could quibble over how much each variable is influencing attendance, but they’re all undoubtedly playing some part. 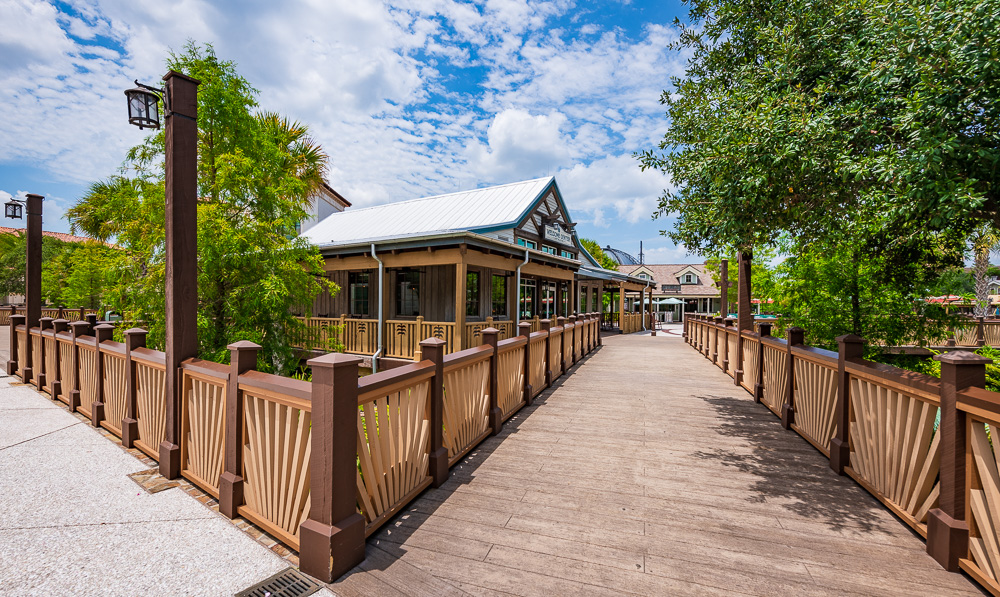 Regardless of the explanations for low attendance, this cannot be what Walt Disney World expected. It’ll be interesting to watch trends in the next week or so to see whether things pick up, level-off, or further decline.

If I were an executive with Disney, I’d be closely watching this, and surveying guests who visited Disney Springs plus everyone with a vacation booked for this summer or fall. I’d also be very hesitant to announce reopening dates for the parks without better insight into the “why?” of this, as well as what attendance projections look like for the parks. 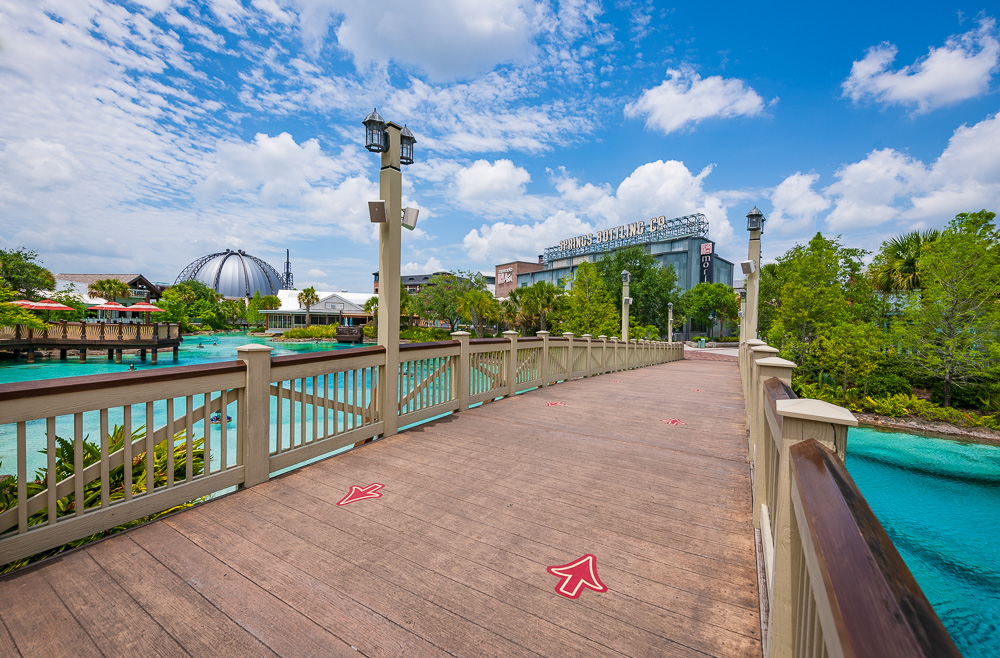 I suspect Walt Disney World leadership anticipates operating the parks at a loss with limited capacity while things gear back up–you have to walk before you can run–but Disney Springs suggests that pent-up demand and visitor appetite for the Walt Disney World experience might be low.

That, or Disney Springs is totally different than the parks, and I’ve simply given this way too much thought. Not like I have anything better to do. 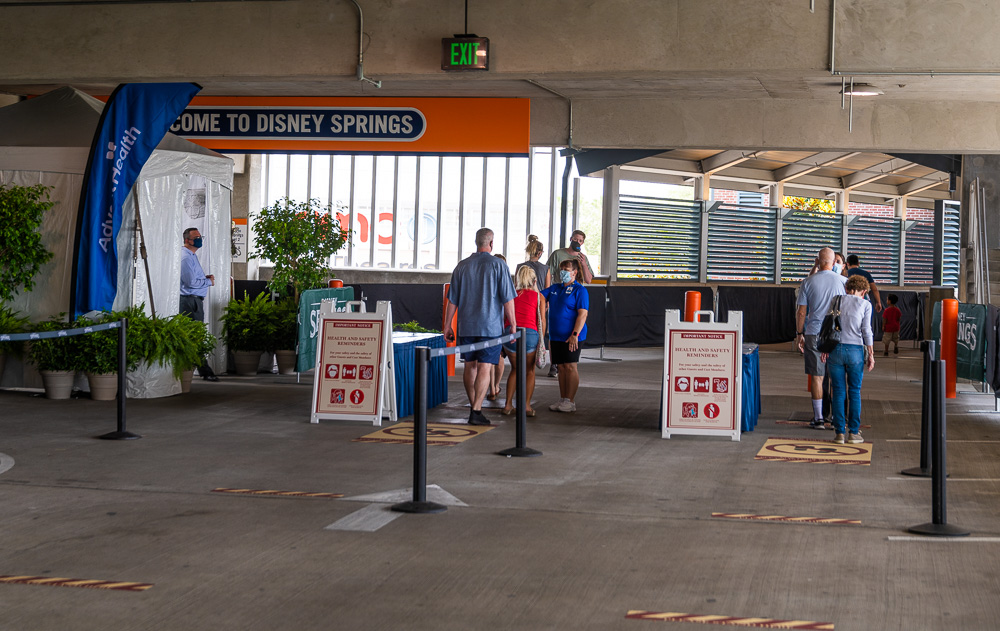 Let’s move along to our Disney Springs “report.”

We parked in Orange Garage (because we’re not barbarians) and headed to the temperature check. This took all of 3 seconds, and was the most people we encountered all day. It was no different than a temperature check coming through customs at an international airport; totally frictionless and doesn’t warrant further commentary. 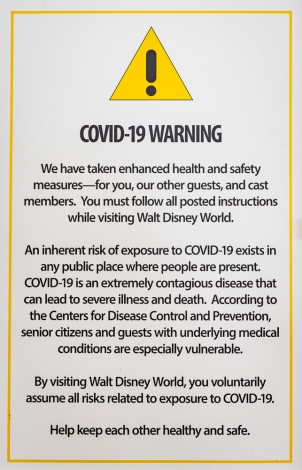 Here’s a look at the text of the sandwich board warning.

These signs were all over the garage and by the escalators. None beyond that, though. 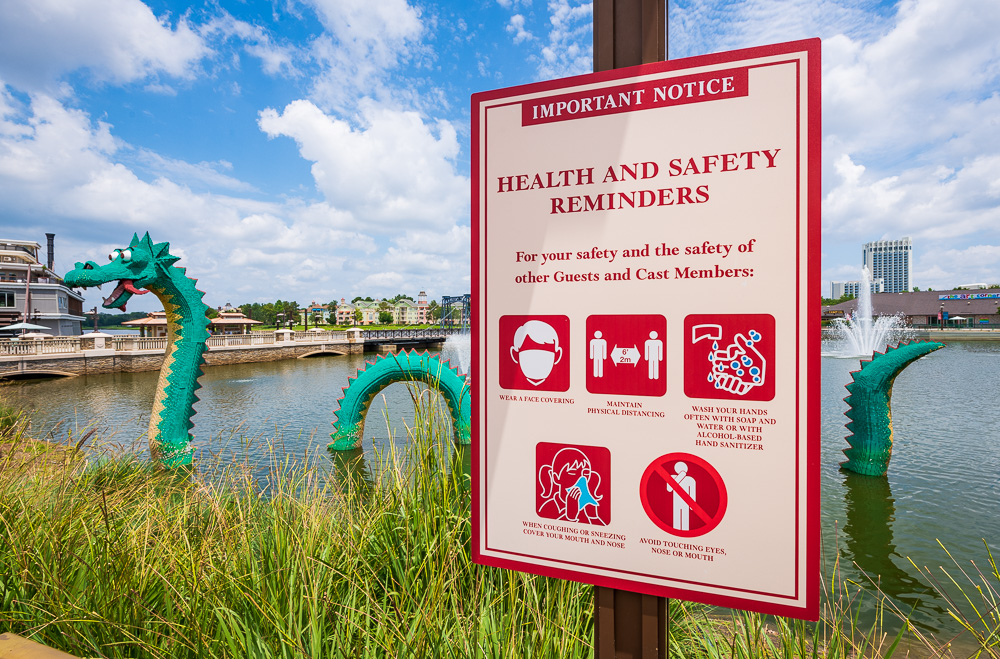 In general, the signage was fairly minimal.

That’s not reflected particularly well in this update (since I focused on spots that looked differently), but aside from maybe ~6 signs like this, ~12 sandwich board signs with the same message, directional arrows on some (but not all) bridges, and some stand/don’t stand queues outside stores, it was mostly business as usual. 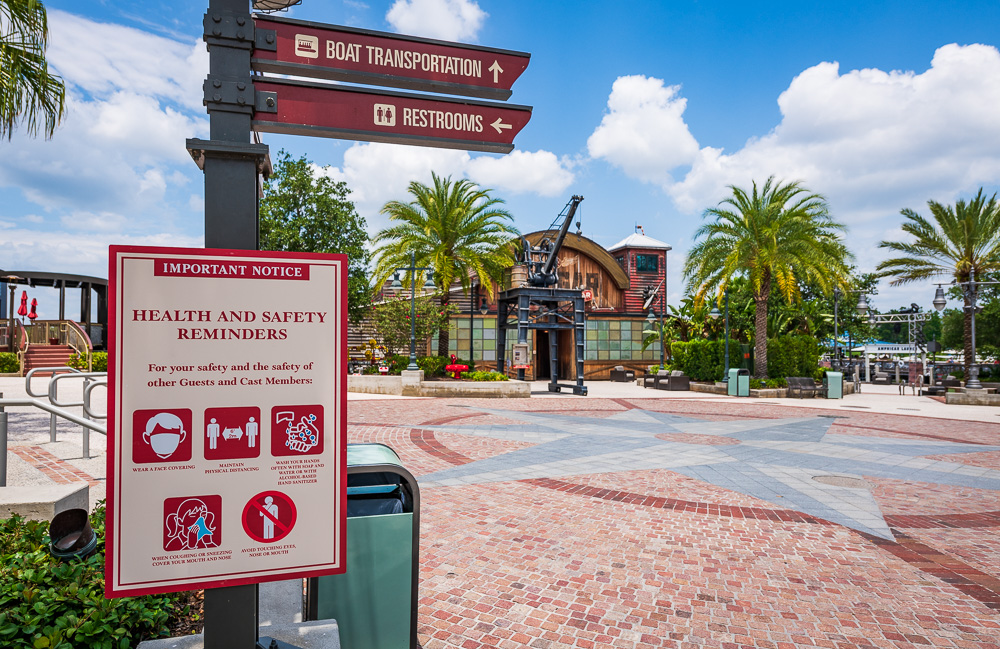 There were definitely not as many of these signs as the “critter warnings” added four years ago along the shoreline of every single body of water at Walt Disney World.

In other words, I don’t think there was too much visual blight. Of course, there’s nothing to say more signs won’t be added. 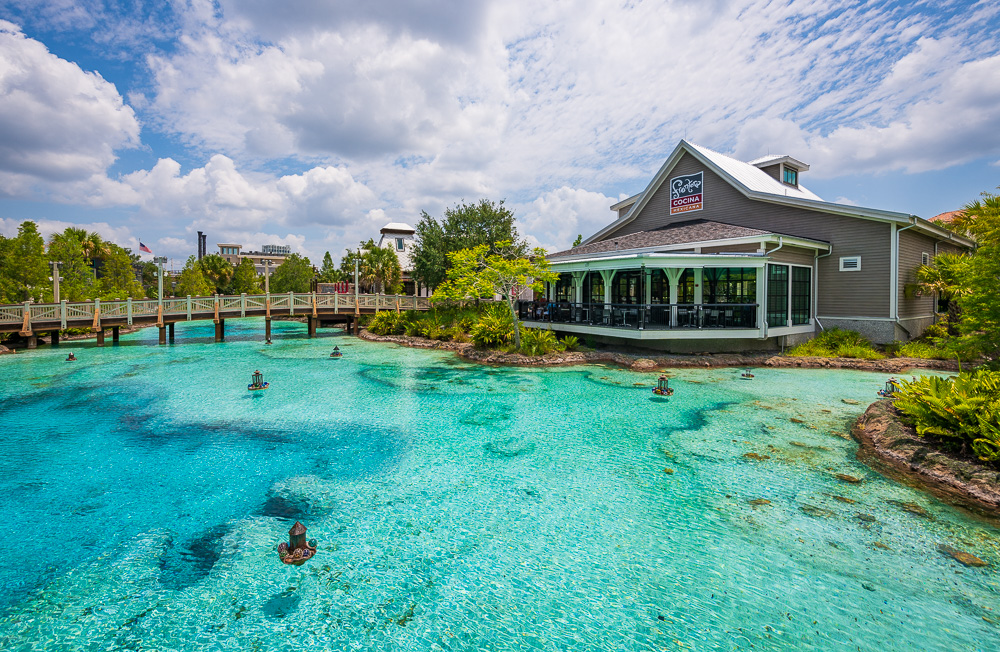 The more obvious change was everyone wearing masks.

Guest compliance with this rule was scattered. The vast majority of people we saw were wearing masks, but some had them pulled down or off. In fairness, social distancing was incredibly easy to accomplish (with far more than a 6′ buffer) everywhere, which could explain why some felt comfortable removing their masks. The bigger test will be if/when things are crowded. 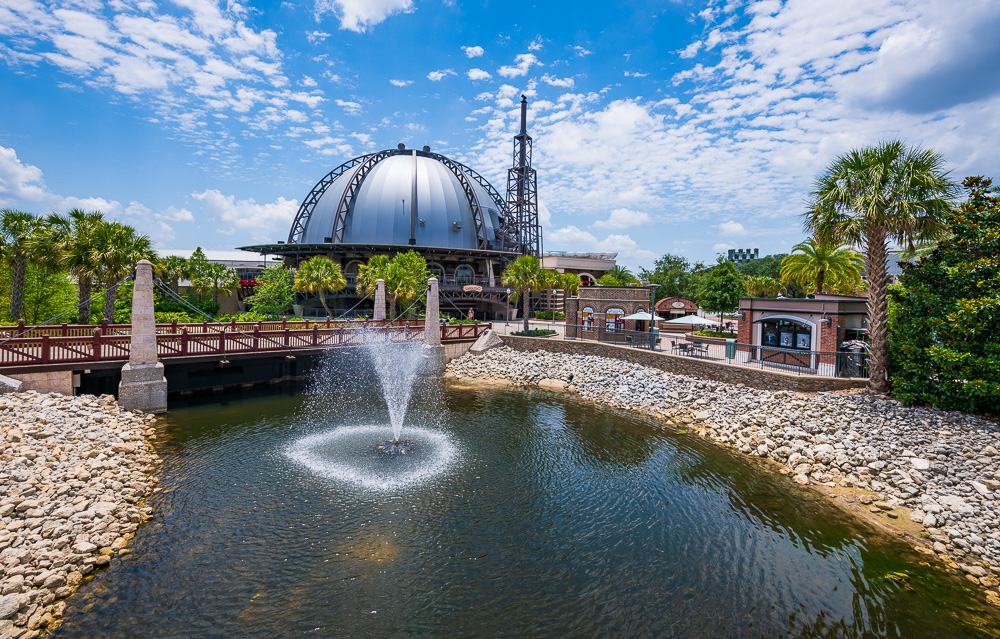 We’ve worn masks all day before out of courtesy when we’ve been sick in Japan, so this wasn’t totally novel to us.

However, I’m also not going to lie or sugarcoat things and say it was easy. Due to the lack of shade and surplus of concrete, Disney Springs is unpleasant on a “normal” 95Âº day. Masks exacerbate that. 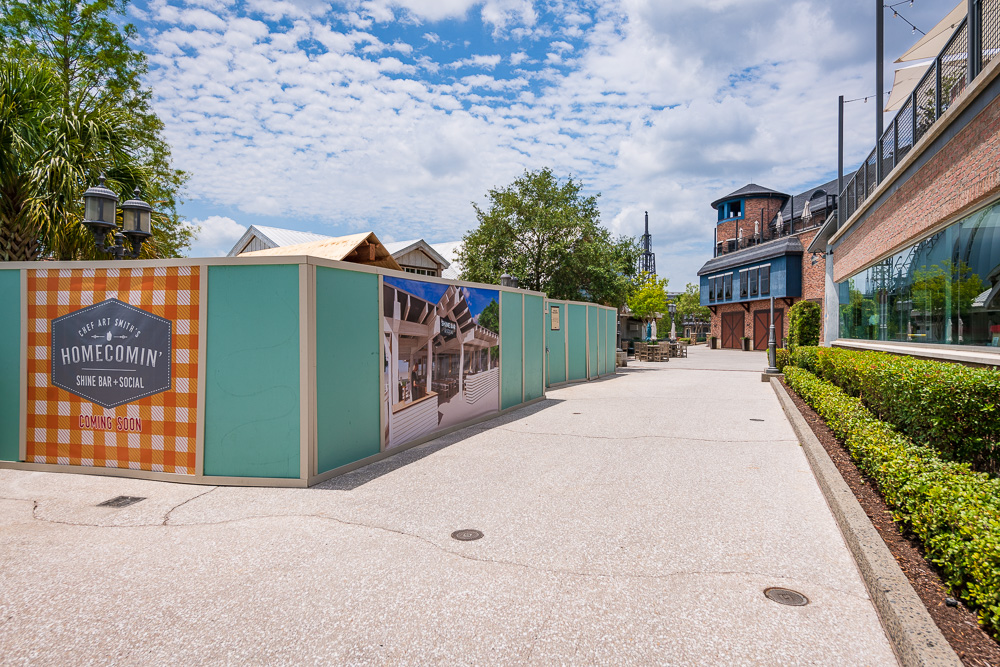 Regardless, it was so nice to be back at Walt Disney World. Easing back into life out in public with such a low-crowd experience was perfect, too.

Selfishly, if masks are what thins out crowds a bit, I’ll happily wear them at Walt Disney World. Even in the summer heat and humidity. Locals definitely have an advantage in this regard, as a mask for 3-4 hours a couple of times per week is far easier than all-day, every-day for a weeklong vacation. 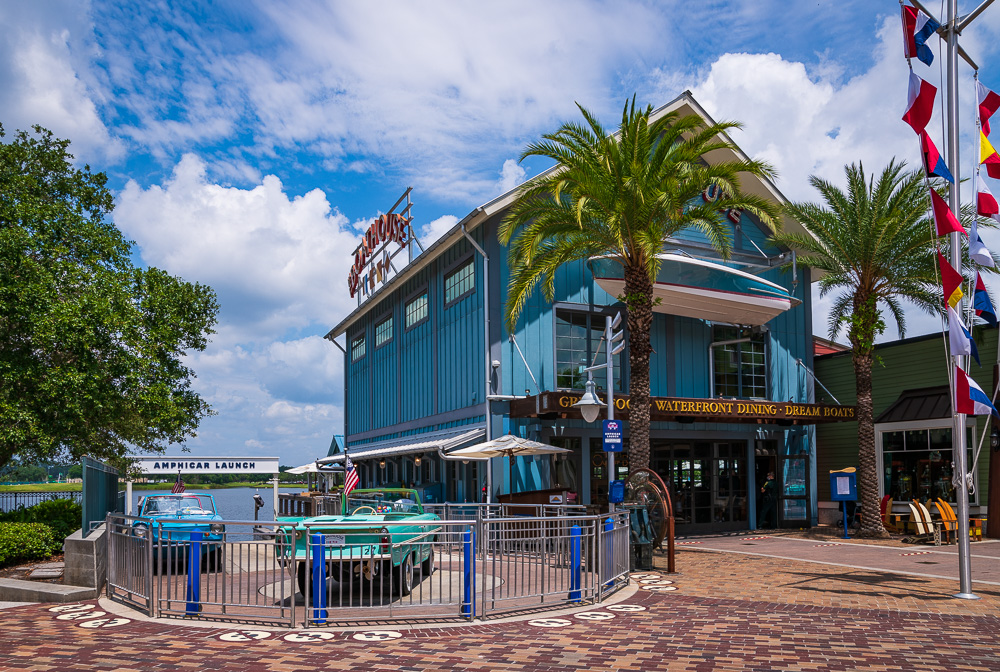 Ironically, the most surreal and apocalyptic element (and even those terms are a bit hyperbolic) of the visit was not the screening, signs, or masks–it was the absence of people.

I’m not saying I want heavy crowds (definitely not), but it was very odd for Disney Springs to be a ghost town during what should’ve been one of the busiest weekends of the year. It reminded me of the Twilight Zone episode, “Where Is Everybody?” except (spoiler alert) I don’t think this was to test my fitness to become an astronaut. 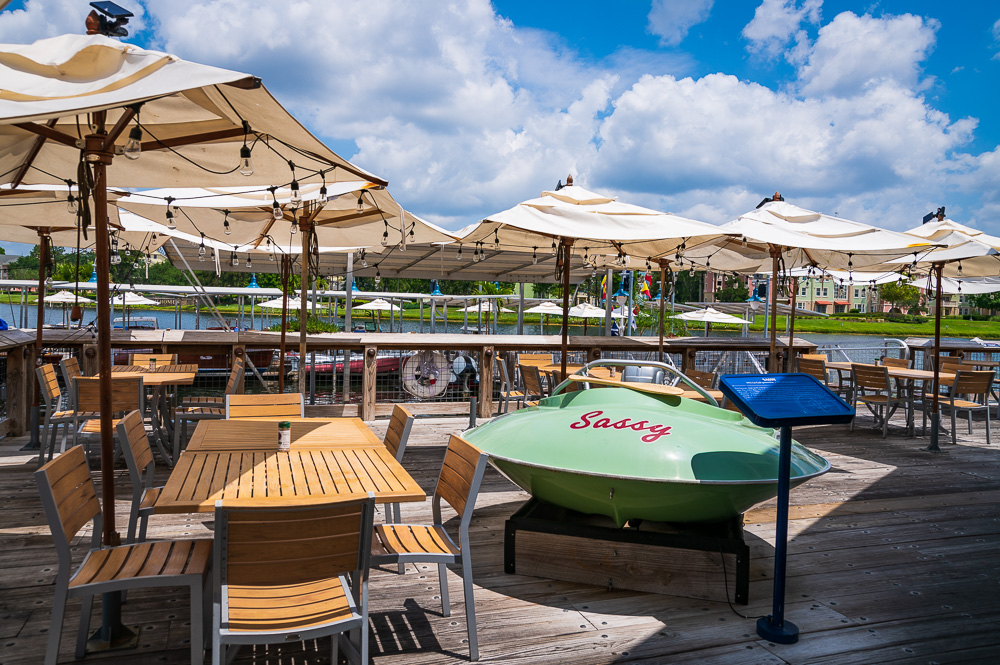 We made lunch reservations at the Boathouse, and requested a table outside.

This is again a matter of easing back into things and risk mitigation; even with the heat, we’re more comfortable in an open-air setting for now. 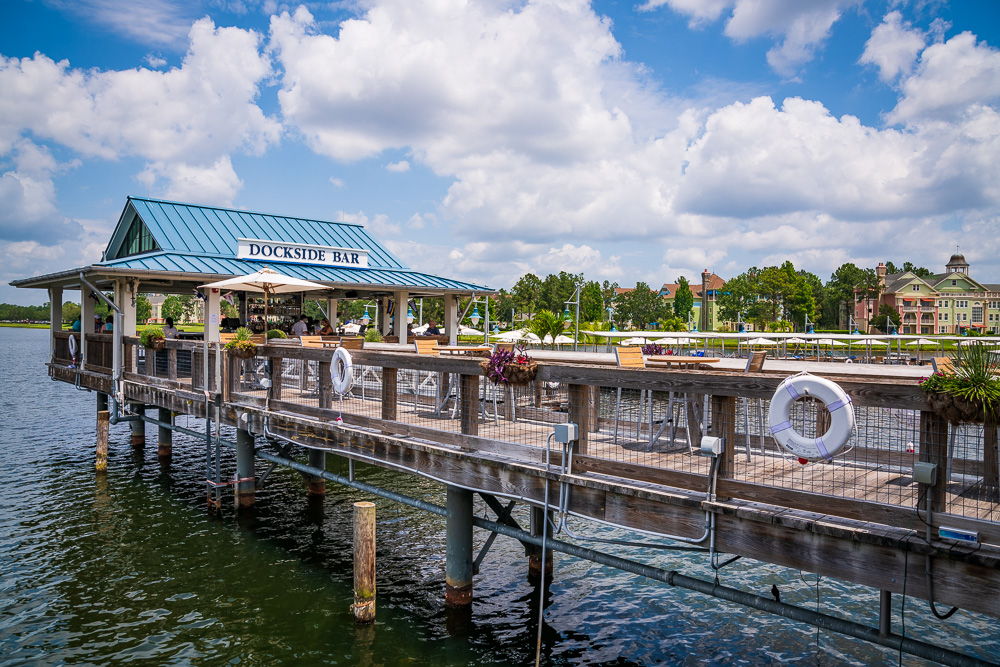 It turned out to be totally perfect, even on this hot day.

We had shade, a nice breeze, and a view of Saratoga Springs Resort across the water. Aside from our server wearing a mask and the restaurant being virtually empty, the meal had a near-complete sense of normalcy. 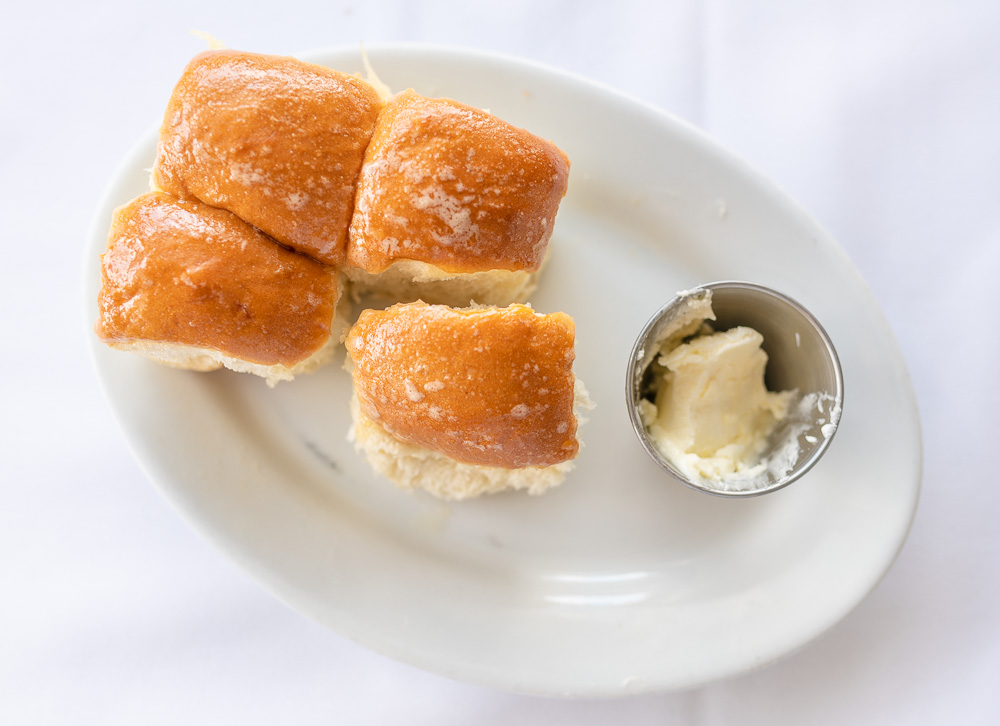 This being my first restaurant meal in well over two months, I decided to make up for lost time.

For those keeping score at home, I ate a half-dozen of the Boathouse’s iconic rolls. 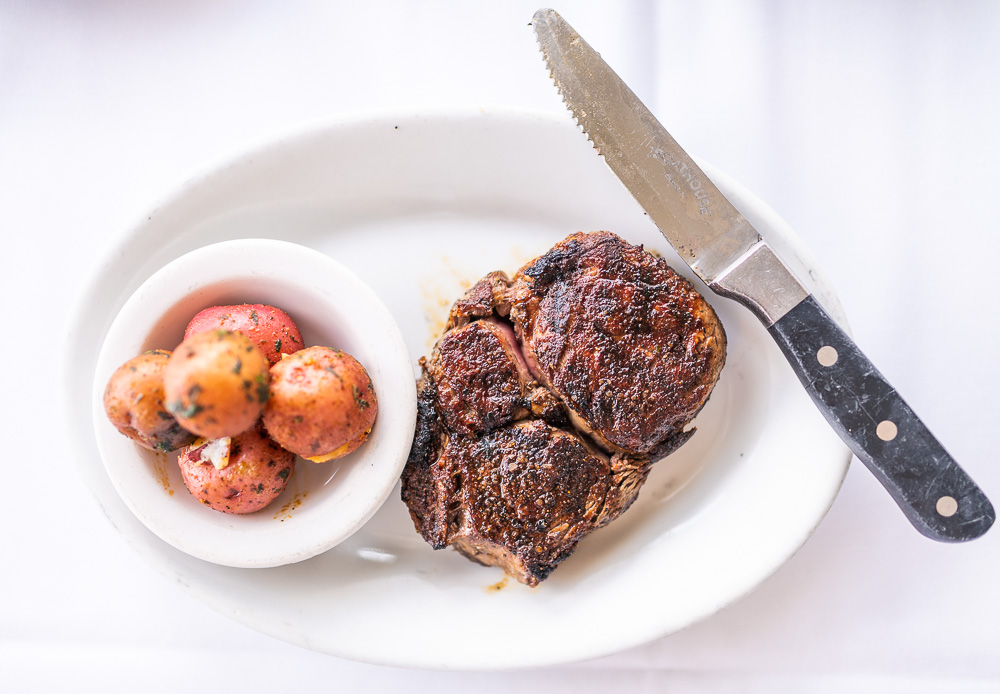 For my entree, I ordered the 75-Day Aged Gibsons Grass-Fed Australian Boneless Ribeye.

I’m honestly not entirely sure if this is one of the greatest things I’ve ever eaten, or if it just tasted that way after I’ve been subsisting largely on a diet of cabbage and cauliflower at home. Either way, this was perfection! 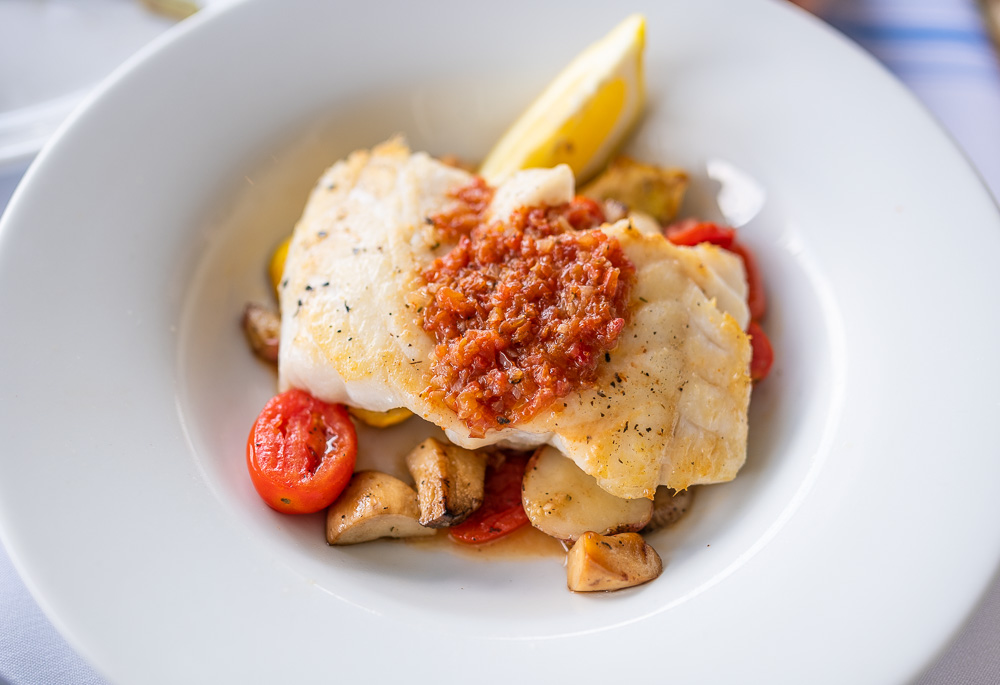 Sarah had the Gulf of Mexico Red Grouper. It was also very, very good.

Going in, we had debated doing the Baked Alaska for dessert to restart our WDW dining with a bang. “Unfortunately,” I ate way too many rolls for that. Next time. 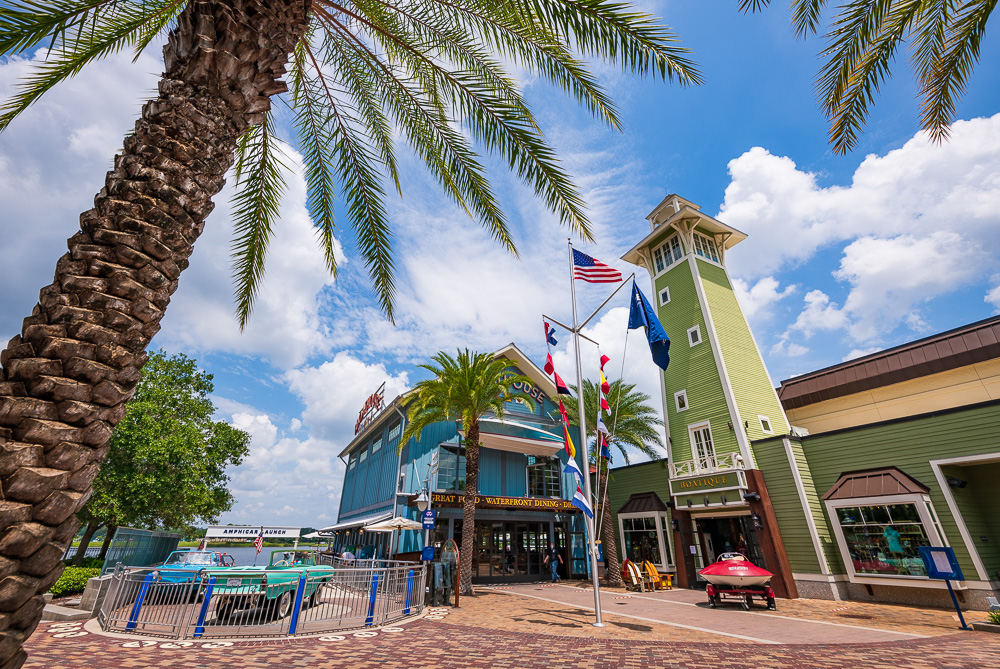 There will definitely be a next time, at least so long as crowds stay relatively low.

There’s obviously some risk in going out, but that’s not going away anytime soon. The benefits to our mood/outlook/happiness/etc. easily outweighed the minimal risk. That balance will change depending upon the circumstances, though. 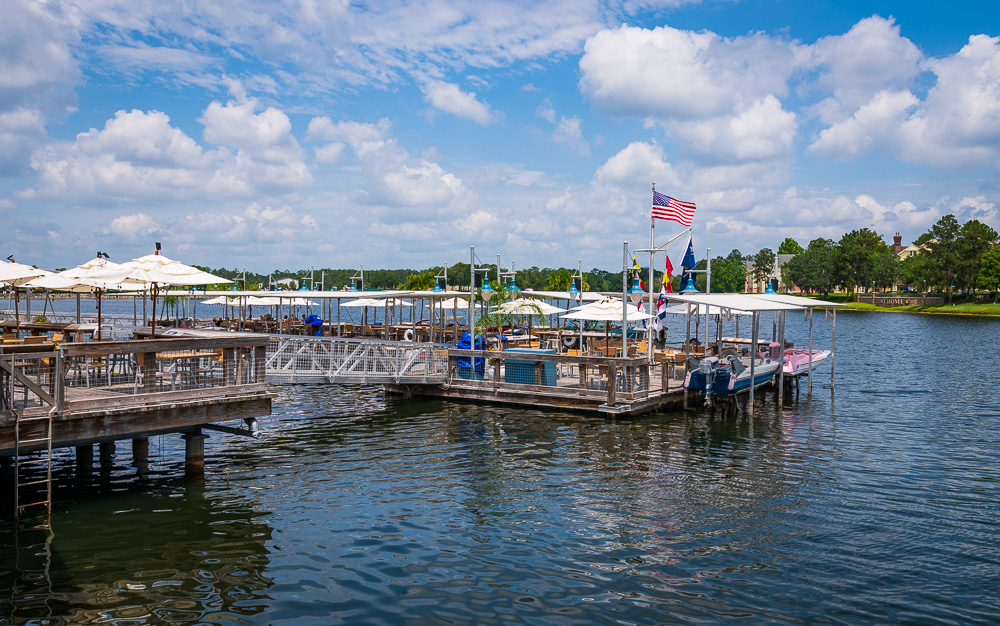 If you’re thinking of doing a meal at Disney Springs, we’d highly recommend the Boathouse (hardly a surprise since it’s normally our #1 table service pick for Disney Springs).

However, the Boathouse also offers some unique advantages during this “temporary abnormal.” The restaurant is colossal, has a range of great outdoor seating options, and the menu has a ton of range for everyone in your party. 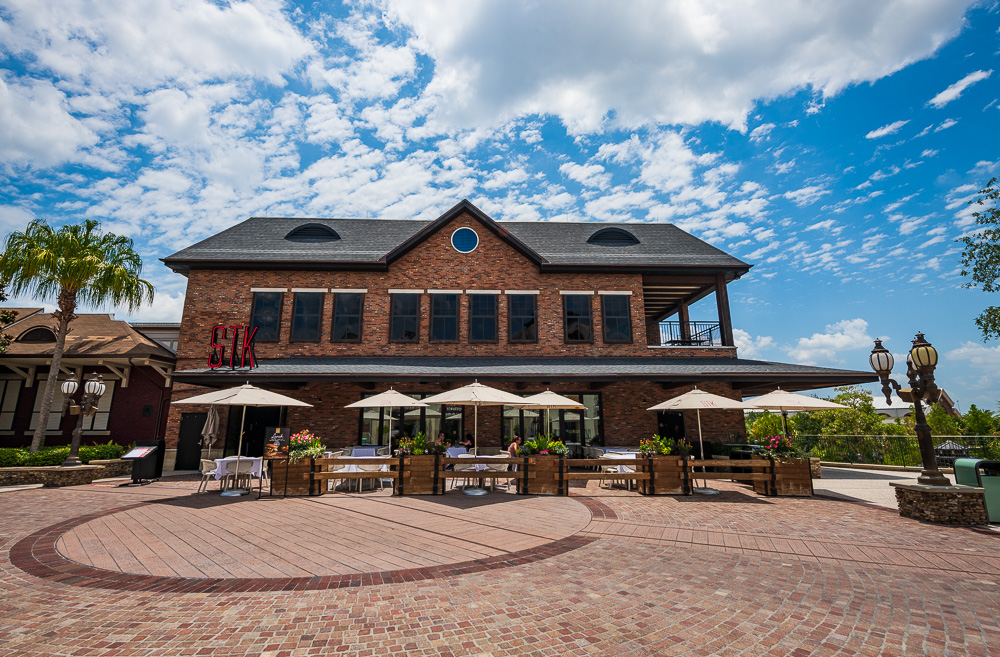 We’re debating whether to return to the Boathouse for our next meal, or go somewhere else.

STK is the leading candidate right now, for their best-value lunch in all of Walt Disney World (which we can confirm has returned–but is $1 more expensive) or the happy hour specials. STK also has outdoor seating, albeit not nearly as much. 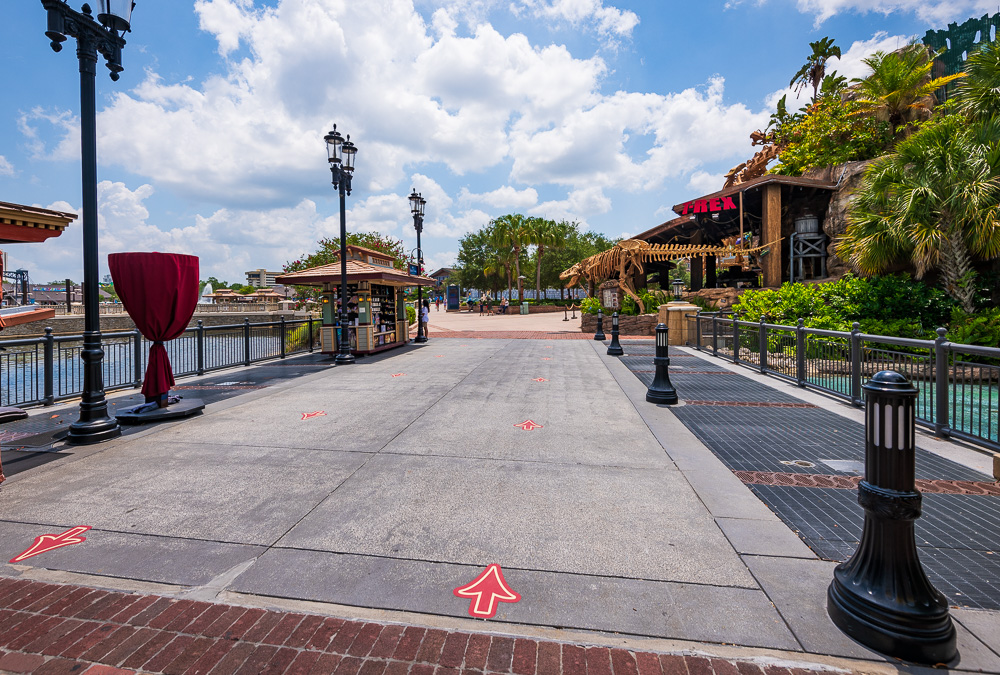 In terms of other tips, our big one would be to visit later in the day. We arrived shortly after Disney Springs opened for the day to minimize our exposure to potential crowds, but it never got more crowded.

Next time, we’ll go for sunset and stay until closing. While it’s hot and humid out, this is the significantly better strategy (at least, until crowds pick up…if they do) due to the lack of shade at Disney Springs.

All things considered, this ghost town visit to Disney Springs went far better than expected. The lack of crowds is definitely interesting, and presents a lot of questions to ponder. Regardless of the reasons why–or the surreal feeling created by the absence of people–we’ll definitely be heading back to Disney Springs sooner rather than later. Even with the temporary rules, heat & humidity, it was a great experience that did wonders for our spirits and helped reestablish some semblance of normalcy. If you’re a local on the fence about doing Disney Springs, we’d absolutely recommend it.

Have you visited Disney Springs since it reopened? Where did you dine? How was your experience? Would you recommend others visit, or hold off? Will you be visiting Disney Springs in the near future? If you’re a local and the answer is “no,” what’s your reasoning? We welcome a variety of viewpoints here, and will not delete anything on opinion alone. However, we will not tolerate insults, arguing, or politically-charged comments. Don’t ruin a 95% fine comment with an unnecessary cheap shot—that 5% will get it deleted. Additionally, please do not incessantly harp on the same point across multiple comments. Respectfully share your opinion and move along.

105 Responses to “Our “Ghost Town” Experience at Disney Springs”