So a crazy thing has happened…in terms of views, these last two weekend updates have been the most popular posts of their respective weeks. I have no idea if it’s their conversational tone, eclectic mix of stuff, or just total luck, but these articles that take by far the least time to prepare have been popular. Of course, the only rational thing for me to now do is mess with their formula and totally ruin their success! In the spirit of making them a “Disney blog post variety hour,” I’m going to expand them a bit and test out some new ideas. Don’t expect any consistency week to week, as this Sunday post is totally going to cater to my whims…if I even remember to do it! (Sunday is for football…I have my priorities.)

I don’t know if this “tidbit” got lost in the shuffle last week with the “big” AVATAR Land news (and by big, I mean three pieces of concept art that have now been analyzed ad nauseam), but WDWMagic.com broke the news late last week that a Main Street USA bypass would be built in the Magic Kingdom to ease parade and fireworks congestion. Since this bypass is already technically there and regularly used, I assume what’s meant is that this bypass will be given some degree of themed design.

What degree is the big question. This is quite possibly the biggest addition to the Magic Kingdom this year, and its significance cannot be understated. Really. Or rather, its potential significance. Those who read our Disneyland Paris Trip Report are probably sick of my gushing over their Main Street, but that Main Street, in my opinion, is the gold standard in terms of design. A big reason why is the Arcades (you won’t find Pacman here…this is fancy-speak for “covered walkway”). These arcades are located behind the shops on both sides of Main Street, and they were built to serve as shelter from the elements (it snows in Marne-la-Vallee, where Disneyland Paris is located). Regardless of purpose, these Arcades are awesome, and add a ton to Main Street. They are fun to explore on their own, plus they give character and dimensionality to Main Street.

There has been limited conversation about this on Twitter and elsewhere, and I’ve seen a few people mention that Disney may not want these to function like the Disneyland Paris Arcades, since that would mean less people exposed to the shops on Main Street. I’m not exactly sure how far behind the Main Street shops this bypass is, but in Paris, the Arcades have entrances to all of the shops, and I suspect would lead to greater exposure to the shops. If there isn’t mass hysteria on Main Street, people might be able to easier enter the shops on their way out of the park. We entered a number of shops that we otherwise wouldn’t because something at the edge of the Arcade entrance enticed us to step inside. Building the bypass in a manner that allows ingress and egress to the shops may seem like it’s an issue, but it’s not really…

It’s not an issue because this is one project that Disney should do the right way. Well, Disney should do all projects the right way. But this one has great potential to be viewed by Disney as a “quick fix,” and I think that would be a big mistake. As attendance continues to grow, the necessity of this bypass will increase (eventually, they’ll be needed on both sides, like the Arcades) and it will need to be used nightly. Beyond that, guests will voluntarily use it when it’s not busy, as it gives them another location to explore on Main Street, and adds more depth to the land. Given this, it makes very little sense to build it on the cheap as if it’s a quick fix to address crowds for this holiday season, or next Easter, etc.

This should be built the right way with great design and detail, in the location where it belongs (right behind the shops), regardless of the infrastructure changes or added costs involved. This is a potentially big change that could substantially benefit the Magic Kingdom in the long term, and it should be approached as such. A ‘quick fix’ hallway that does a better job of concealing backstage but is not ‘show quality’ is the wrong route to take with this–and I hope it’s not the route Walt Disney World plans on going.

Let’s instead hope that this is a serious and time-consuming project that fits the feel and design of Main Street. I’ll gladly suffer through one more holiday season of strollers hitting my heels and the rich fragrance of BO if it means having some beautiful Arcades further down the road… 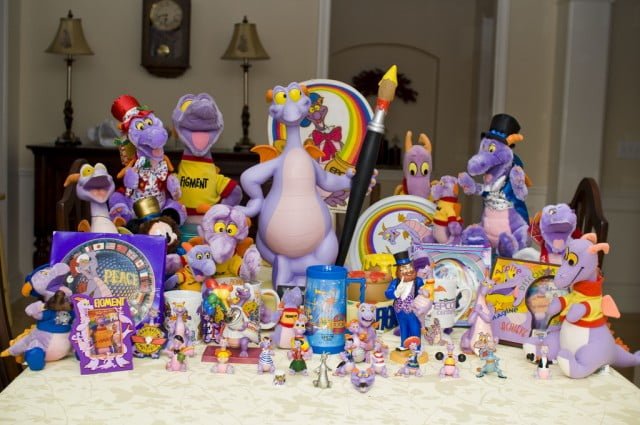 For a while, I have had a bad eBay addiction. I’ve tamed it in recent years, but I still get about 20 daily email alerts from eBay for various Disney-related search times. (Yeah, I have a problem.) I thought it’d be fun to share some of the cool listings I find in these emails that I won’t be bidding on myself…

Alien Encounter Action Figures – I loved Alien Encounter, so much so that we still do Stitch’s Great Escape from time to time to see Skippy. I may or may not already have a set of these figures of my own…

Figment Big Fig – The price for this seems ridiculous, and it is. Unfortunately, on the rare occasions they’re listed, I see them sell for $800-1,000. I bought mine (see above) back in 2007 for $150. Better investment than Apple stock! 😉

Vintage Donald Duck River Country T-Shirt – If this shirt were a medium or small, it would be mine. I’ve purchased too many large shirts on eBay over the years because they were awesome, only to never wear them. I’ve learned my lesson!

EPCOT Center Future World Tray – I honestly don’t know what you’d do with a tray like this, but the art is gorgeous. I actually have a shirt with this design, but I almost never see it listed these days.

If you’ve find something cool on eBay (we’re not interested in pins or Vinylmation), share it in the comments!

Wednesday – Wild Card Wednesday! Disney’s Polynesian Village Resort Review, Journey to the Center of the Earth Photos, or Harbour Galley Review. This is your call—vote in the comments. Majority wins!

Friday – Sony QX100 Review for “Photo Friday.” Wanted to review the Sony QX100 “lens” last Friday, but memory card didn’t arrive in time. We’ll share both of our perspectives in that review.

We’ve had another week of travel photos on TravelCaffeine, including shots from Acadia, Pinnacles, and Rocky Mountain National Parks. Plus, photos from the largest fireworks show in North America!

Passport to Dreams has an interesting post on the Haunted Mansion, but what caught my eye this week was an article I previously missed from September with newspaper clippings of Orlando businesses welcoming EPCOT Center with open arms. Wouldn’t see that camaraderie today!

Parcorama reports that Disneyland Paris merchandise is taking a step in the right direction. More Paris-specific merchandise and Art on Demand coming soon!

Our friends at Disney Photography Blog did their final PhotoMagic 2013 Update and Roll Call, looks fun! PhotoMagic 2013 starts today (October 20) so if you’re a local or are in town, check it out. We won’t be there, but I will be judging a fireworks contest they’re doing!

Yesterland does another DCA: Then & Now, this time looking at Paradise Pier. It should come as no surprise that we love these posts!

It’s a bit older (this site rarely posts updates, so it took me a while to see), but Tomorrowlounge 67 has an article on the Rocket Jets that has some gorgeous photos and art. How I long for this clean Tomorrowland aesthetic in the US.

Finally, if you’ve written or read a good blog post recently (or know of any meet-ups, etc.), please share a link in the comments of this article. Hopefully this will help me find great new blogs to read and feature in future “Cool Linkage” sections, and also send a bit of traffic your (or their) way!

Have any comments about this update? Thoughts on Walt Disney World Arcades? Vote for our Wild Card Wednesday blog post? Have any of your own blog posts to share? Leave your thoughts in the comments!