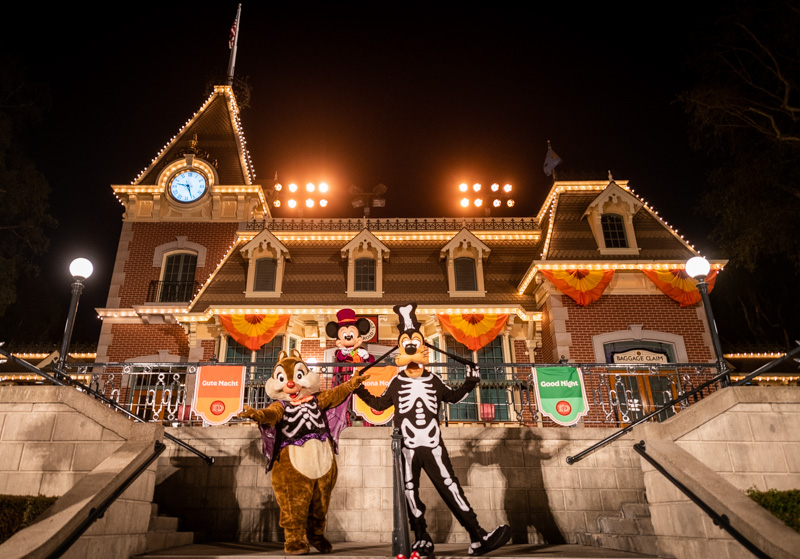 It’s once again “Halfway to Halloween.” Walt Disney World and Disneyland will be celebrating spook season’s answer to Christmas in July with another week of announcements, hauntingly helpful planning advice, and other fun things. This post covers what to expect, plus our predictions about what’ll be announced (Boo to You v. Mickey’s Not So Scary Halloween Party, pricing, entertainment, etc).

This is the second year Disney Parks is doing the #HalfwaytoHalloween thing, and the notion of it being ‘halfway’ to Halloween makes us chuckle just a little bit. Don’t get me wrong–I love Halloween and love any excuse to celebrate holidays prematurely. But being a Walt Disney World regular sorta means having a warped sense of seasons.

For normal Americans, Halloween presumably starts when the air gets crisp, the leaves begin changing, and summer is firmly in the rearview mirror. Maybe around mid-September or even early October. For us, Halloween starts the first week of August. This is still very much summer–the hottest, most humid month and heart of storm season. We’re usually “over” Halloween by the time it starts for most normal people, ready to move on to Christmas.

Nevertheless, I’m excited to find out what the Halloween 2022 season is going to entail at Walt Disney World, and am looking forward to the Halfway to Halloween announcements. I know a lot of you are, too, as we’ve been getting a lot of questions about the Halloween parties and more.

On that note, the #HalfwaytoHalloween festivities kick into high gear on Wednesday (April 27, 2022), with a Disney+ and @DisneyParks Twitter Watch Party featuring a favorite film of the Halloween season, Hocus Pocus. Bring your favorite snacks and join live on Twitter on April 27 beginning at 8 p.m. ET/5 p.m. PT. 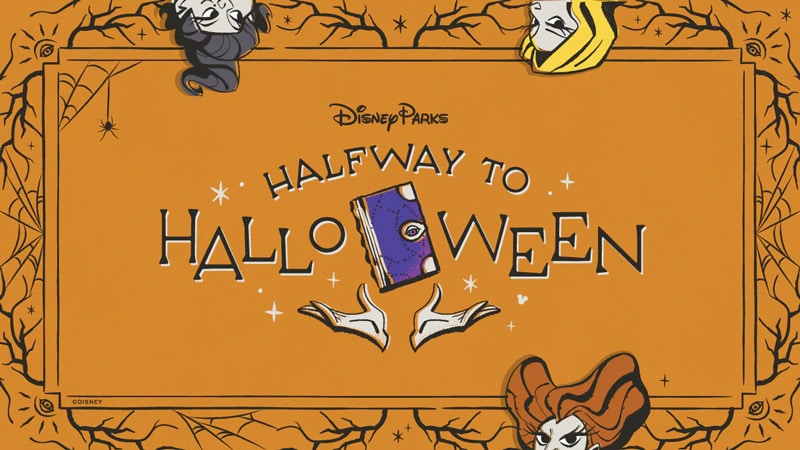 Then there’s the big, daylong #HalfwaytoHalloween celebration on Thursday. This is “nothing but treats” as Walt Disney World and Disneyland will share several frightfully fantastic Halloween and other spooky announcements that you won’t want to miss.

After that, there will be a @DisneyParks TikTok Live beginning on Thursday at 10 p.m. ET (7 p.m. PT). It’ll be live from multiple locations, including Disney Cruise Line, and will feature some “fa-boo-lous” surprises (Disney’s pun, not mine). Guess I need to hire a 13 year old to teach me how to TikTok between now and then… 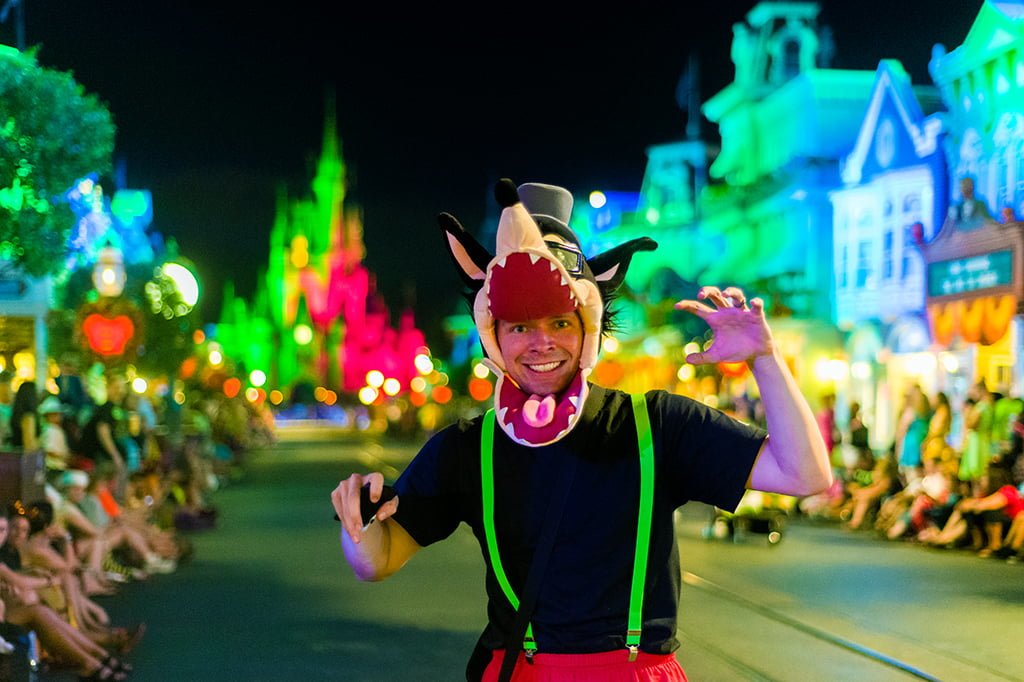 During the #HalfwaytoHalloween celebration on Thursday (April 28, 2022), Disney is inviting guests at Walt Disney World and Disneyland to wear outfits inspired by their favorite Disney Halloween character, film, attraction or theme. Note that costumes are not allowed and you’ll need to follow the attire guidelines and rules at each park.

If you’re confused, the idea is to incorporate accessories, color schemes, patterns that highlight your Halloween favorites or evoke certain characters. Regular ‘street’ clothing that looks like Halloween stuff, not costumes. (So my totally rad Big Bad Wolf look above would not be acceptable as pictured, but would be if I removed the wolf head hat and wore sunglasses instead.)

While you’re dressed for the spirit of the season, you can order some Halloween-inspired foods at select Walt Disney World and Disneyland locations. Here’s a rundown: 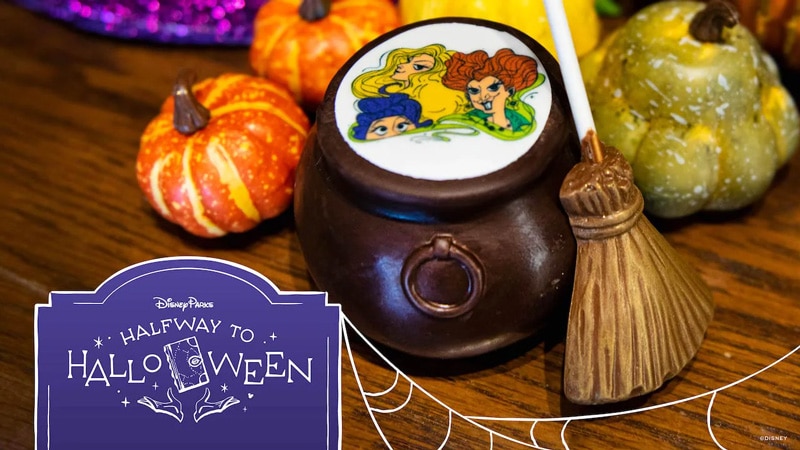 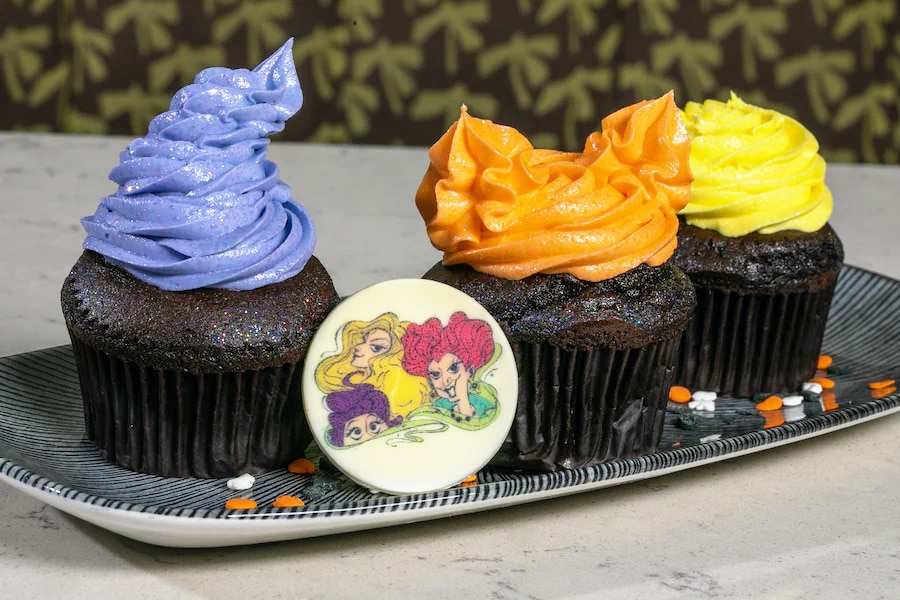 The Ganachery (available April 28 through May 1)

Gideon’s Bakehouse (available April 28 through May 1)

Get an exclusive trading card during Halfway to Halloween. Each four and six cookie box will feature one of the sixteen cards, plus be on the lookout for a bonus card for those waiting in line featuring Barnabas Mephistophelittle! (Limit of one per person while supplies last) 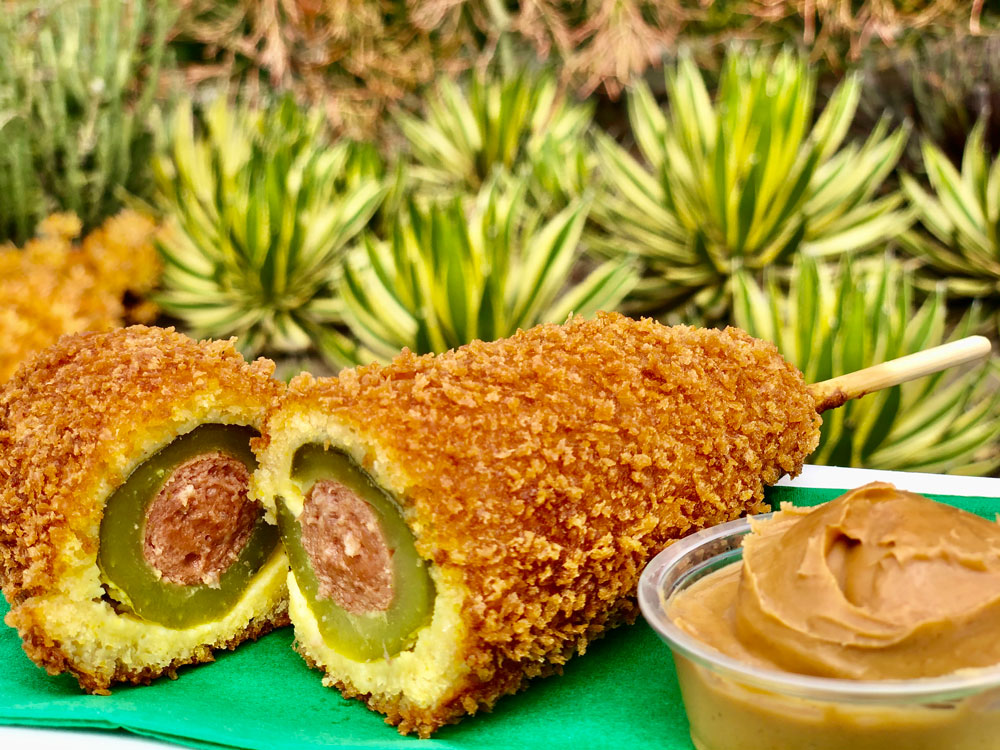 California Churro (available April 27 through May 4)

Okay, commentary time. The whole reason this post exists in the first place, as I want to make a few predictions… 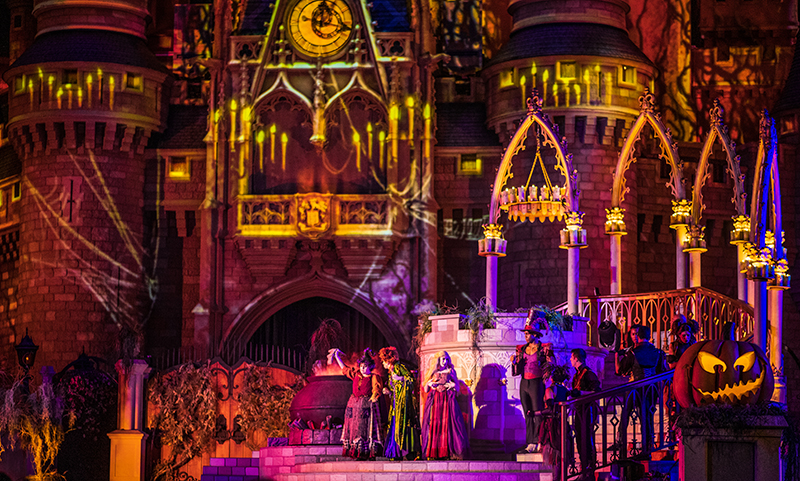 Hocus Pocus Villain Spelltacular Returns – Given its prominence in the teaser, it’s clear that Hocus Pocus 2 is going to be a big focus of the Halloween season. This one is just a no-brainer. The original is a cult classic, the sequel is going to be big deal for Disney+, and that streaming service is incredibly important to the company. On top of that, stage shows are returning to normal, paving the way for Hocus Pocus Villain Spelltacular to return.

Part of me wants to be bold, predicting that marketing budget given by Disney+ for Hocus Pocus 2 could result in fun meet & greets or a ‘reimagined’ stage show with new elements from the sequel. Given the way Walt Disney World often declines those budgets, that’s not a safe bet. Maybe Disneyland will get something fun like that. 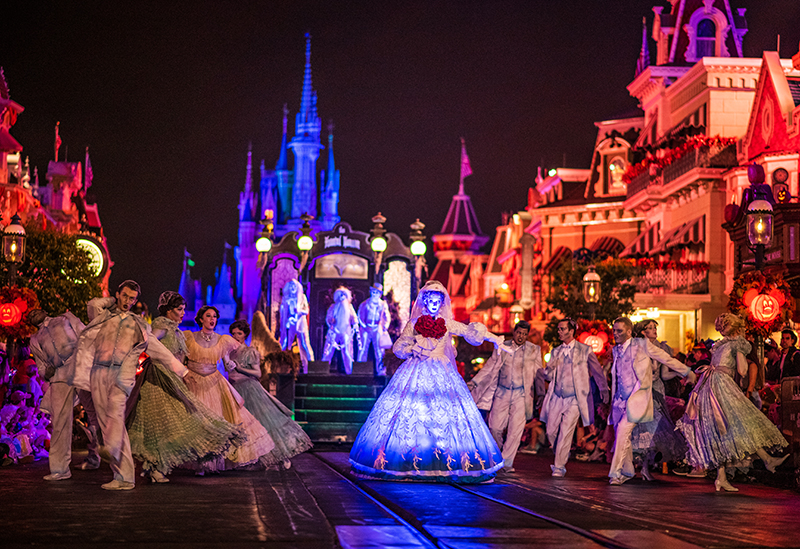 Boo to You Parade Comes Back – Again, not at all a bold prediction. Last year’s event was conceived of and occurred during a time of transition at Walt Disney World. Even Disney Very Merriest After Hours featured a full parade last year.

The bigger question is probably what gets cut from Boo to You and whether anything is added. It wouldn’t surprise me in the least if the entire Halloween Hoedown (Frontierland) unit is cut. The Tomorrowland addition from 2019 also wasn’t particularly strong, so I could see that being cut or condensed. 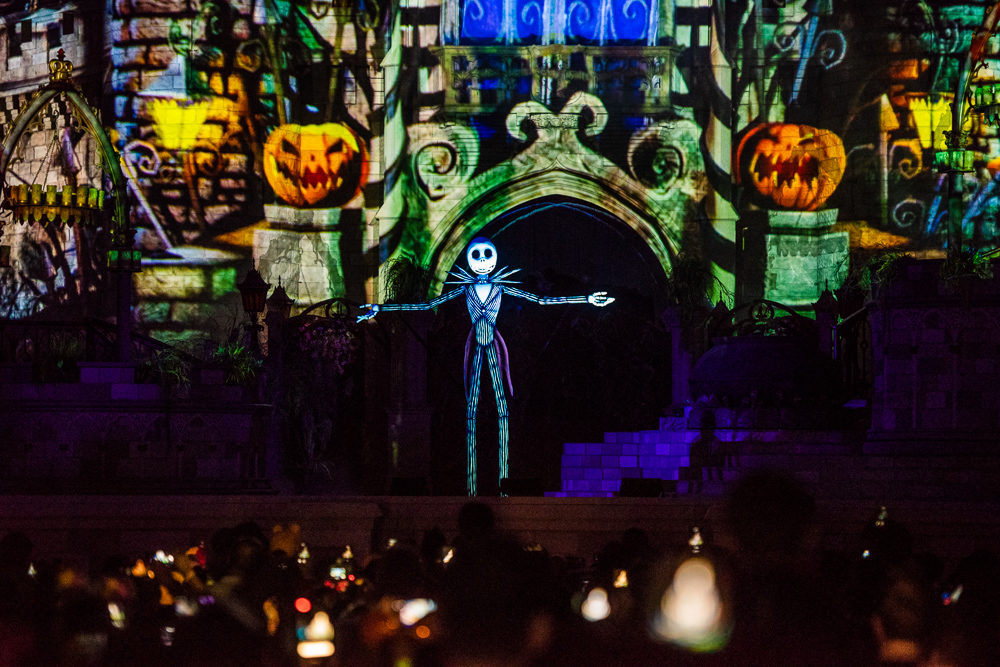 A bolder prediction here would be the return of HalloWishes to draw out the longtime fans, but I don’t see that happening this year. It’s more likely will save the nostalgia card up its sleeve for when sales are slow. 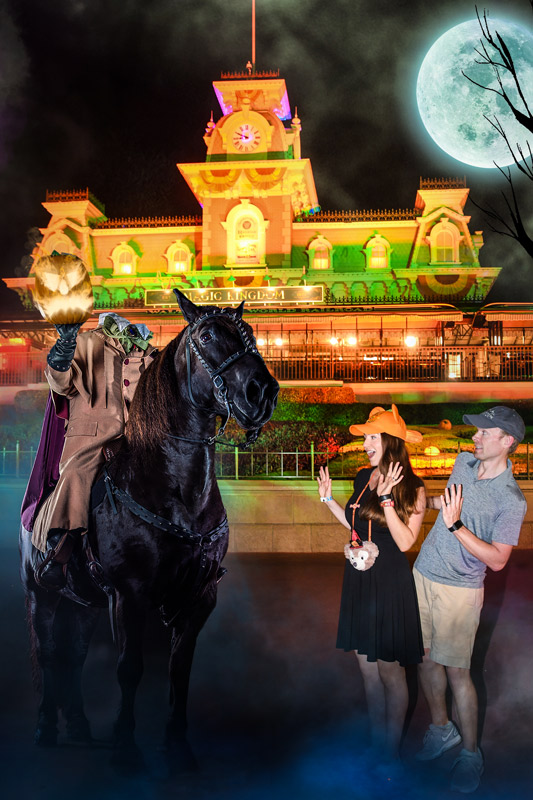 Disney After Hours Boo Bash v. Mickey’s Not So Scary Halloween Party – Given the above three predictions, you might be wondering what difference does the name make? That’s fair, as the return of a full parade, fireworks, and Hocus Pocus stage show essentially makes this Mickey’s Not So Scary Halloween Party in substance and spirit, even if not in name.

With that said, my prediction is that they stick with the After Hours naming convention for the Halloween event. It’ll probably be called Boo Bash, but an entirely new After Hours name to differentiate it from last year’s scaled back offering wouldn’t surprise me. I don’t expect it to be called Mickey’s Not So Scary Halloween Party. I still think we haven’t seen the last of that name–it’ll be used down the road for a nostalgia play.

The big difference, and why an After Hours name will likely be used, is because of the timing (after normal park closing), duration (shorter than MNSSHP), and focus (lower crowds) of this year’s Halloween event. As we’ve pointed out countless times, the hard ticket Halloween and Christmas parties cause logistical headaches with crowd dynamics, which is a big reason for the change. This matters less from August through October, but it’s hard to see Magic Kingdom hosting Mickey’s Not So Scary Halloween Party, but then reverting to Disney Very Merriest After Hours for the Christmas season.

I’m not super confident in this prediction, and I really hope it’s wrong. I think Mickey’s Halloween/Christmas Parties are superior to their After Hours counterparts, and are worth the problems they cause with crowds from August through December. 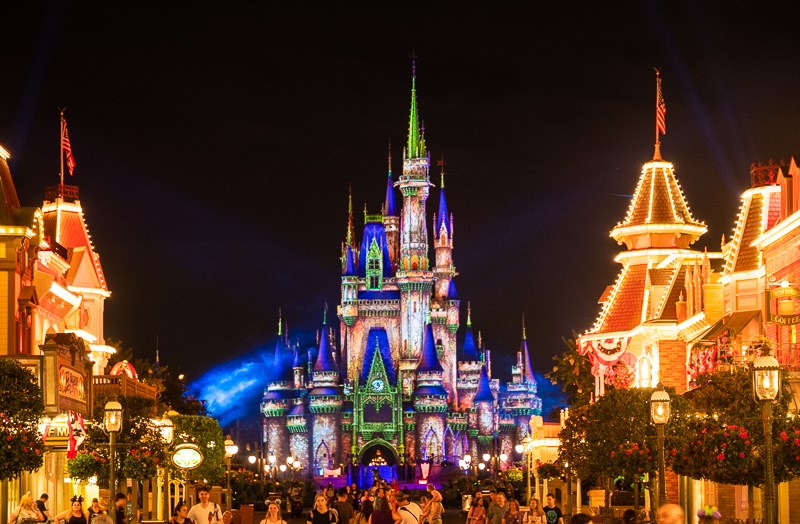 $149 to $249 Ticket Price Range – Last year, Disney After Hours Boo Bash tickets ranged in price from $119 to $169 for most nights, with Halloween costing $199. Disney Very Merriest After Hours tickets were $159 to $199 for most nights, with the final two events costing a cool $249. There was a lot of outrage about these price points, but if I recall correctly, every single night for both events sold out.

We ‘tracked’ Very Merriest After Hours ticket availability, hoping their slower sales were a sign that Walt Disney World had been too aggressive with pricing. Sadly, we were wrong. Those tickets moved slower than their Halloween counterpart, but ended up selling out, as well. (It’s likely the capacity cap was higher for Christmas, given that there was more to do.)

Honestly, I can’t even wrap my head around Disney pricing at this point. For years, people have been proclaiming that Disney is pricing out the middle class or has exceeded the tipping point for most guests. And yet, things sell out faster than ever. I was perusing the Emporium at Disneyland over the weekend, and absolutely could not comprehend some of the price points. In particular, there was a pink spirit jersey for $120. After seeing that, I started counting how many of those I saw in the park (in my defense, we had a lot of time to kill waiting for the nighttime spectaculars) and literally lost track–there were that many guests wearing them. Meanwhile, almost everyone had at least one $35 Elliott the Dragon popcorn. 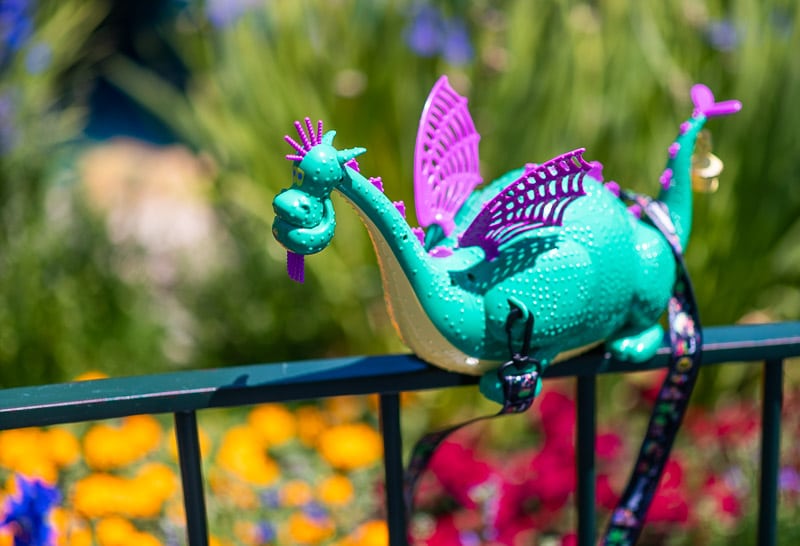 The point is not to critique the ways people spend their money. I’m the last person who should be judging others on that. Rather, it’s to underscore the reality that prices are up dramatically in the last few years, and people are paying them! Some fans claim this is simply Disney targeting the 1%, but you’ll never convince me of that.

I’ve seen Lifestyles of the Rich and Famous and MTV Cribs (very relevant references, I know). Wealthy people aren’t wearing spirit jerseys, staying at Value/Moderate Resorts, or waiting in line hours to buy popcorn buckets that look like dragons they’ve never heard of. (I mean this as no disrespect to those who are fans of the aforementioned products or resorts–I like 2 of the 3. I’m just saying you can’t account for the popularity of these things by saying, “they’re for the rich.”) 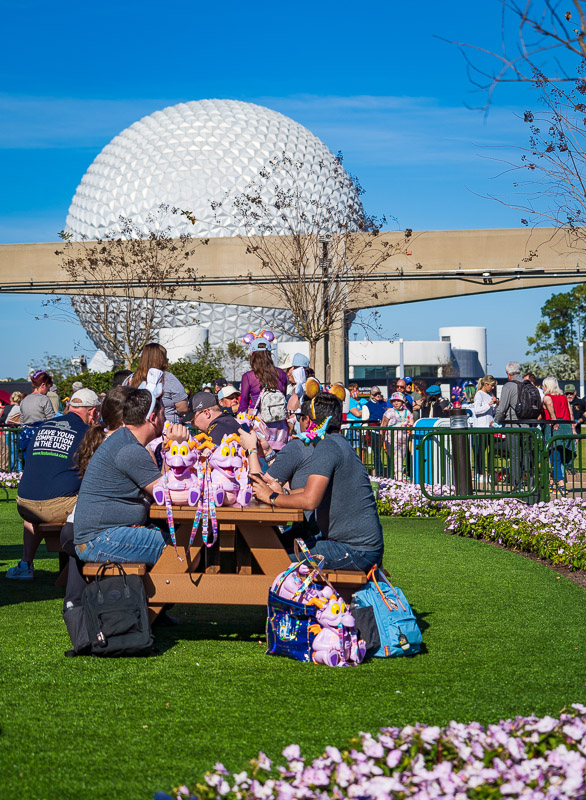 Whether it’s pent-up demand, accumulated household savings, residual stimulus money, wage increases, or something else, a lot of regular Americans are having no issue paying higher prices for all things travel and leisure. This is evident in everything from Disney’s recent increases to the staggering cost of airfare right now.

Despite all of this, crowds are increasing and tourism is booming. Complain as we might, there’s absolutely no reason to believe that Walt Disney World will alter course with pricing until demand dies down. Who knows when that’ll happen, but my guess is “not by Thursday.” (Assuming tickets or prices for Boo Bash/MNSSHP are released alongside the announcement, which may not happen.) 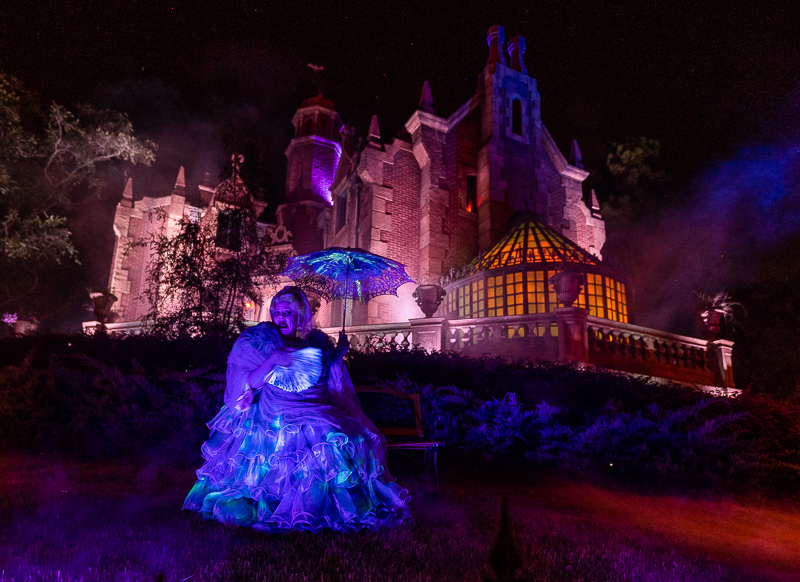 Ultimately, those are some of my predictions for the Halloween season at Walt Disney World, not necessarily what’ll be announced during Halfway to Halloween. Disney could start with vague details, like the name of the event, date range, and a line indicating it’ll feature “spooky festivities including entertainment, characters, special performances, décor, lighting, music, treat stops, and so much more!”

It’s also likely we’ll get more details about Disney Cruise Line’s Halloween on the High Seas and Disneyland’s plans for Halloween. Even though California is usually more laid back about announcing hard ticket event details, it seems inevitable that Oogie Boogie Bash will return, so hopefully we’ll hear a bit about that.

Now that I’ve made my Halfway to Halloween predictions…what are yours? Think Walt Disney World will announce the return of the Hocus Pocus stage show, fireworks, and/or Boo to You parade? What about Mickey’s Not So Scary Halloween Party v. Disney After Hours Boo Bash? Think any of this will NOT be announced? Expecting other Hocus Pocus 2 news? What are your thoughts on ticket prices? Will your family be buying or sitting the Halloween hard ticket events out? Are you excited for Halloween 2022 at WDW, DLR, or DCL? Do you agree or disagree with our perspective on this? Any questions we can help you answer? Hearing your feedback–even when you disagree with us–is both interesting to us and helpful to other readers, so please share your thoughts below in the comments!