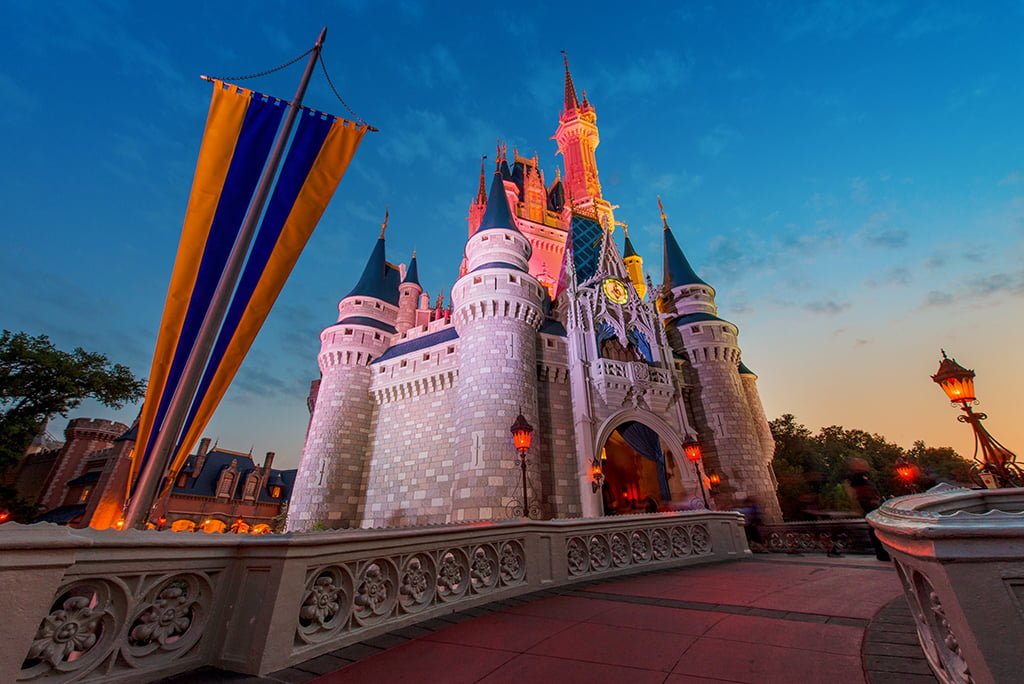 It’s been three weeks since Walt Disney World announced the parks would begin reopening on July 11, 2020. It’s been one week since we looked at the lack of updates on DisneyWorld.com, threw our arms in the air, and said this is crazy.

Walt Disney World has offered scant updates in the 10 days since releasing its “Know Before You Go” Resort & Restaurant Info pages, which themselves only answered some questions. Both before and after that, the biggest question was undoubtedly about when registration would go live for the new limited-capacity theme park access system.

Those pages only addressed park entry in passing, noting that both a park reservation and valid admission would be necessary for access, and that “a Disney Resort hotel reservation does not guarantee theme park access.” Other than that and the fact that such a system would exist, limited other details have been released…

Due to this shortage of official info from Walt Disney World directly, we’ve instead looked towards the similar systems in use at Hong Kong Disneyland and Shanghai Disneyland for clues. In this post, we’ll discuss those plus the latest tidbits of info released today by Walt Disney World.

Hong Kong Disneyland just unveiled its system, which will require all guests to make an online reservation for their visit date with their valid tickets or Annual Passes through the HKDL Park Visit Reservation website. These reservations can be made between one and 7 days in advance.

Upon entering your phone number or email in this system, you’re greeted with the following Terms & Conditions click-through: 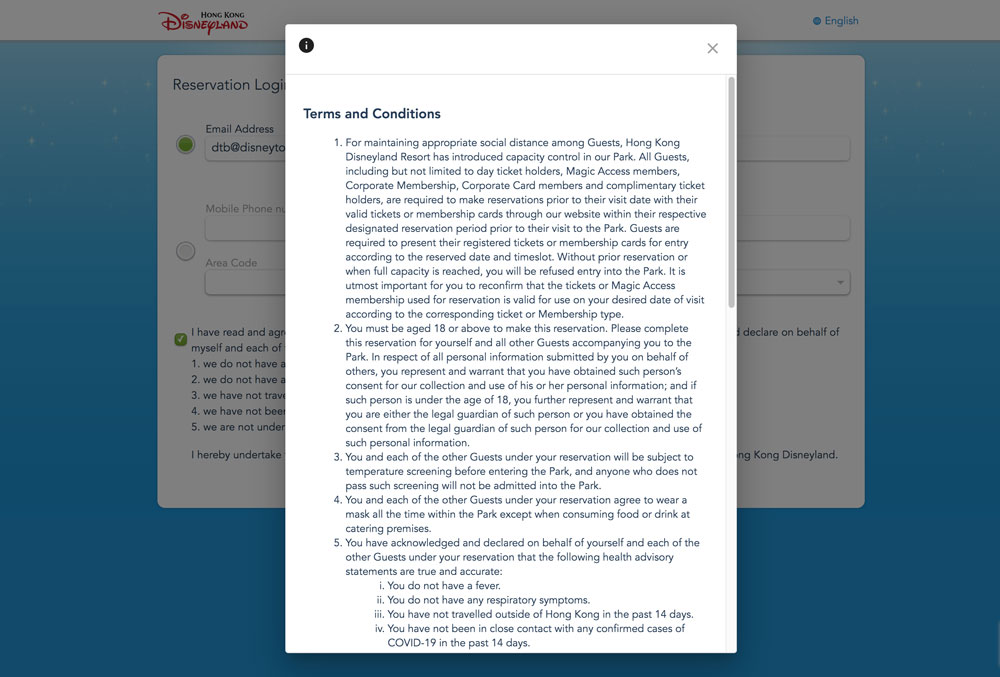 This contains a recitation of the temporary safety rules (you agree that you’ll wear a mask at all times, social distance, etc.) and liability disclaimer, plus a health certification. Unlike mainland China, Hong Kong does not have a QR health code tracking system.

We’d expect much of this same click-through language in Walt Disney World’s system, including a similar health certification. We do not expect Walt Disney World’s registration system to only allows reservations up to 7 days in advance. Hong Kong Disneyland is mostly day guests taking the train in from the city; shorter notice works fine there.

A significantly longer lead-time is likely at Walt Disney World because out of state tourists drive attendance and those guests simply won’t book trips if they cannot secure reservations. We’d expect a 60 day window for Walt Disney World, on-site resorts having a priority window, or both. 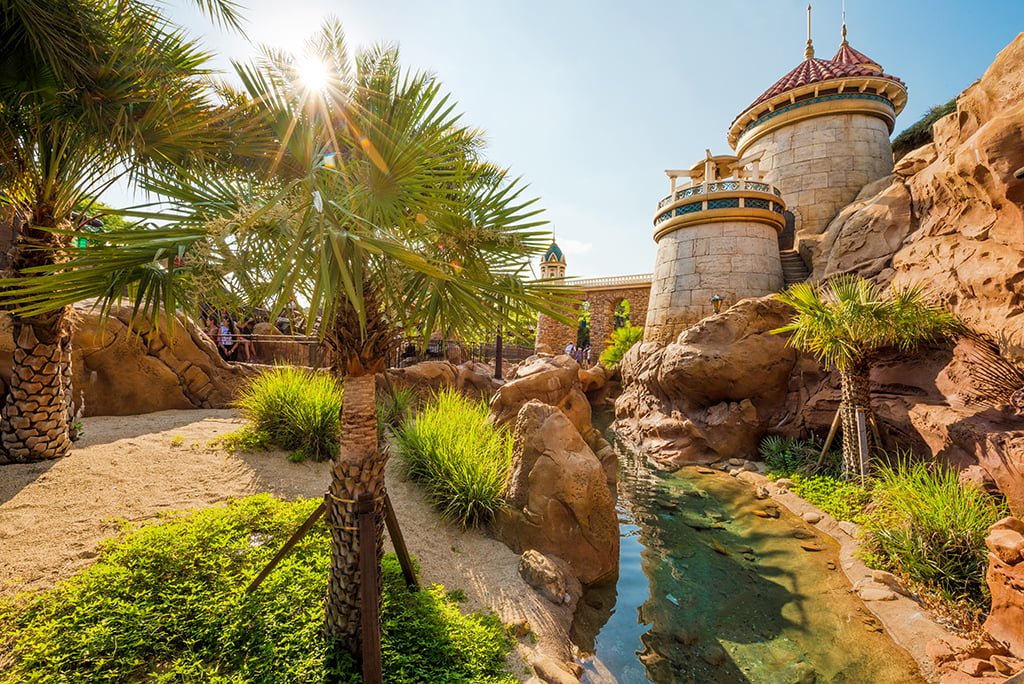 Even though Hong Kong’s system is not precisely what Walt Disney World will end up using, it’s probably pretty close. It’s worth checking out Hong Kong Disneyland’s system and clicking through as many of the steps as you can (up to linking tickets) to see how it works.

Beyond HKDL’s registration process, today we have a few morsels of new information from Walt Disney World… 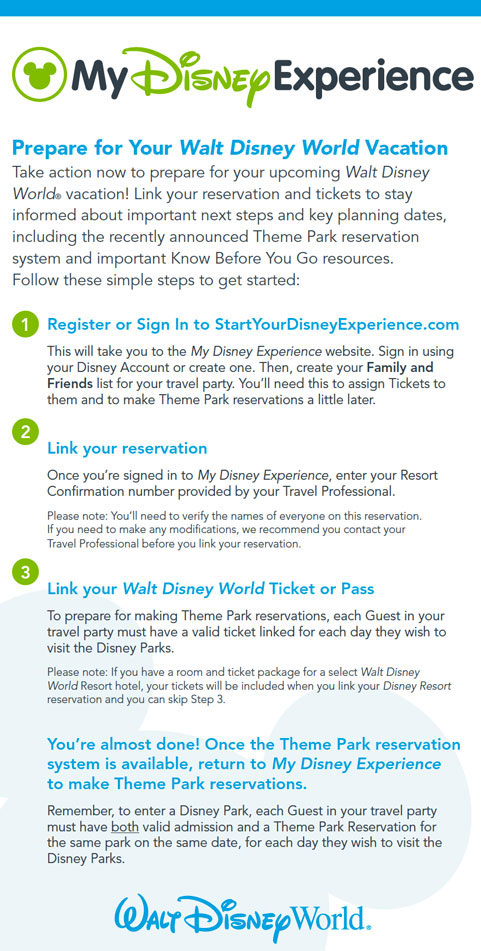 Notices like the one above are being sent to guests with upcoming resort reservations who have not linked their tickets, imploring them to follow the identified steps so that they can use the theme park reservation system, once it goes live.

It’s always a good idea to double-check My Disney Experience to make sure everything is properly and (seems to be) working correctly. 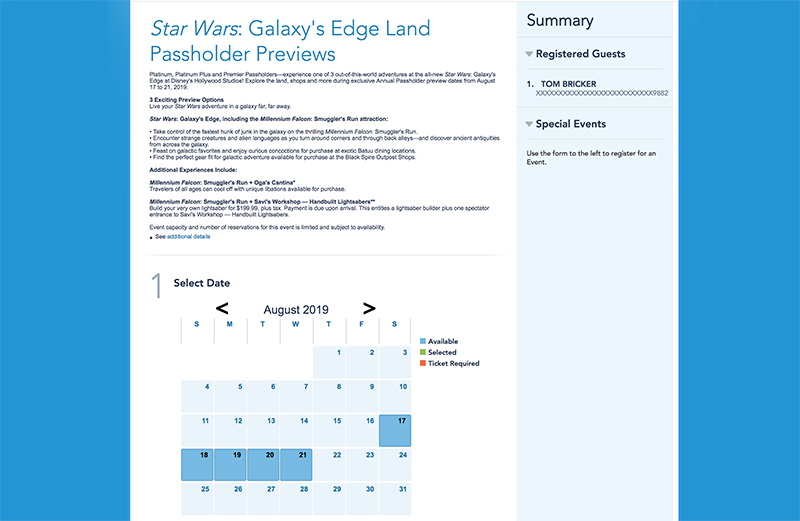 Despite being veritable power users of My Disney Experience, we had an issue last year when attempting to register for the Star Wars: Galaxy’s Edge AP previews.

The app can be wonky, and it’s best to not need troubleshooting help on ‘drop day’ when call volume peaks. Get everything straightened out now, and call on an ‘off’ day if you’re having problems. Trust us on this one. 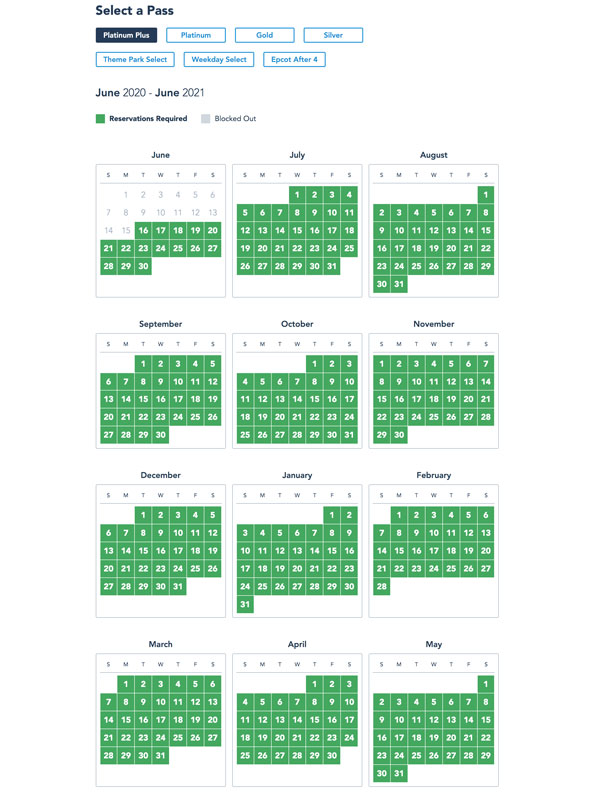 If that’s not enough to convince you that changes are afoot, Walt Disney World has also updated the Annual Passholder Blockout Calendar. Across all tiers, dates are either “Reservations Required” or “Blocked Out.”

While this could simply be a tentative thing, multiple United Kingdom-based travel agencies have received communications from Walt Disney World indicating that the present plan is to use the park reservation system through 2021 (h/t @ScottGustin).

Of course, the operative part of the above is “present plan” which is akin to the “at this time” weasel words we discussed earlier this week in our post about Walt Disney World area hotel reopening dates. We won’t rehash all of that here, but the point is that Disney is masterful at equivocation, and if plans couldn’t change shortly after announcements like this, we’d still have Maelstrom, Universe of Energy, Tower of Terror (California), etc. 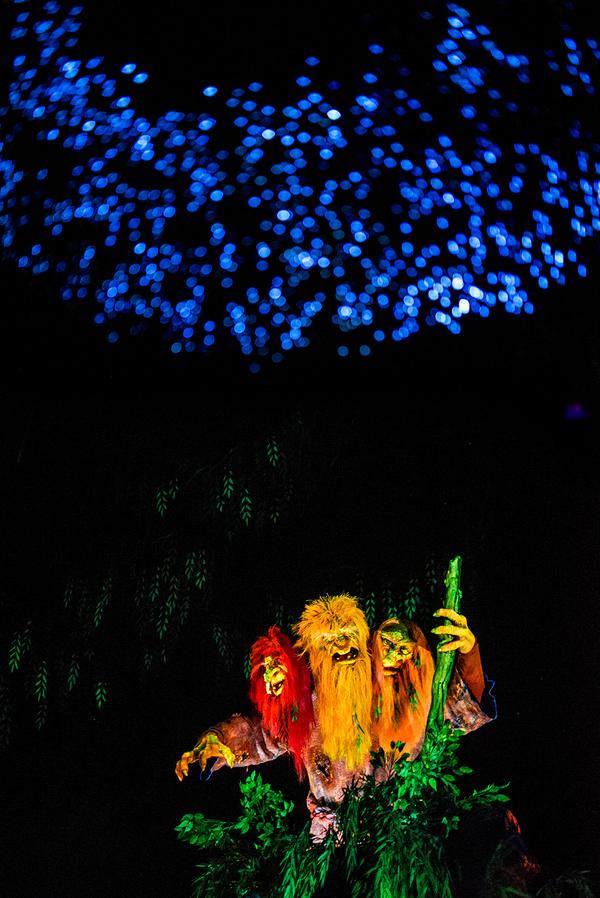 More to the point, this online advance theme park reservation system will only exist as long as necessary to modulate supply and demand.

While knowing attendance numbers in advance is undoubtedly nice for Walt Disney World, the system introduces friction and uncertainty into the guest experience, and its very existence will discourage people from booking trips. That far outweighs any upside to Disney. 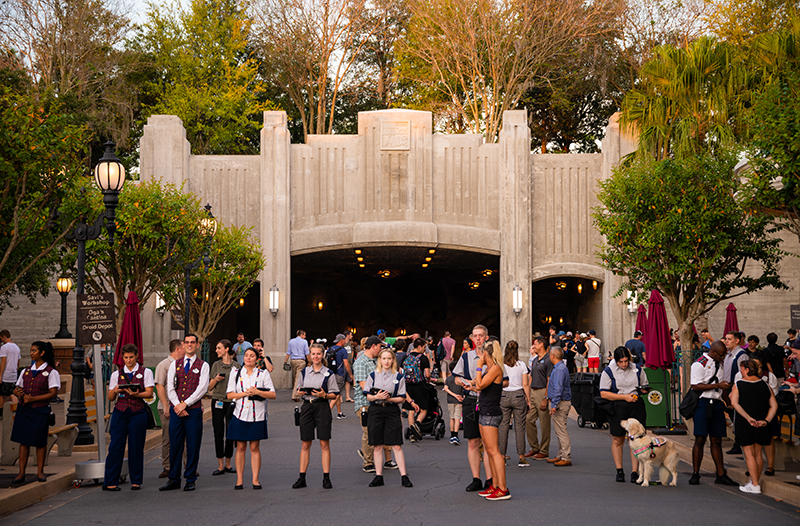 Again, we’ll borrow Star Wars: Galaxy’s Edge as an example. For months, we knew that access to the land would be limited by a virtual queue and boarding pass system. Disney built infrastructure for it, released explanatory videos & blog posts, and cautioned guests about the system. Many fans really freaked out, worried that they’d need to arrive at the park hours before park opening just for a chance to enter the new land. Some vowed to avoid Disney’s Hollywood Studios entirely during their trips.

Then Star Wars: Galaxy’s Edge opened at Walt Disney World, and the virtual queue for land entry was used for a grand total of like 2 hours ever. 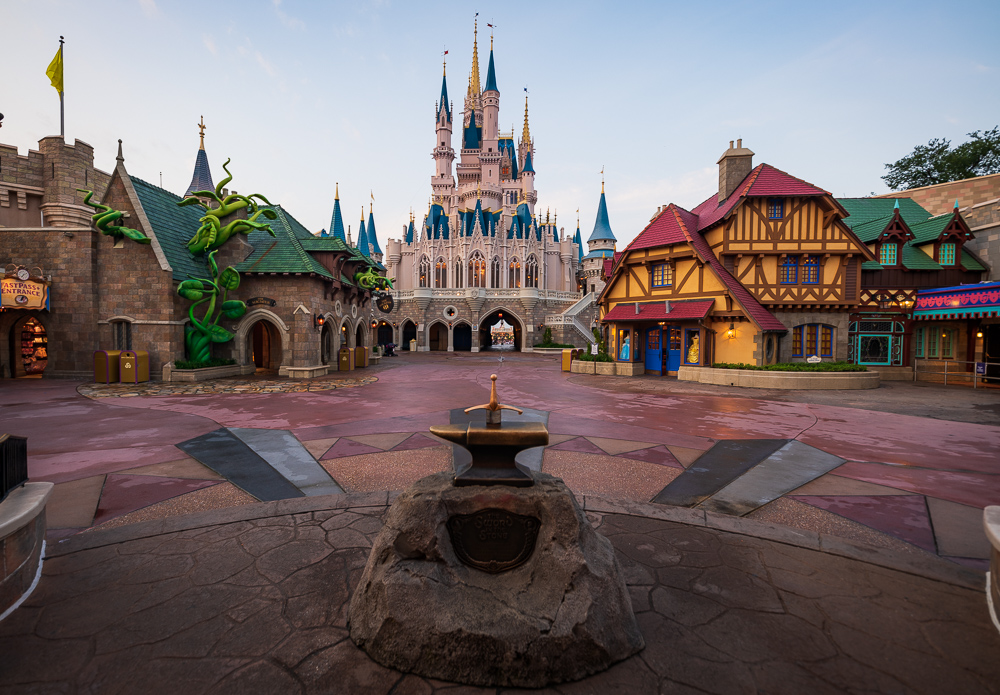 This should underscore two very important points. The first is that, as stated above, Walt Disney World will only use the theme park reservation system as long as necessary. As with the Star Wars: Galaxy’s Edge system, it introduces unnecessary friction, stress, and uncertainty for guests.

Second, and more importantly, Walt Disney World does not have the slightest inkling as to what guest demand looks like right now. There has been a lot of online commentary about pent-up demand, and how Disney’s attendance projections must show that such an advance theme park reservation system is necessary. 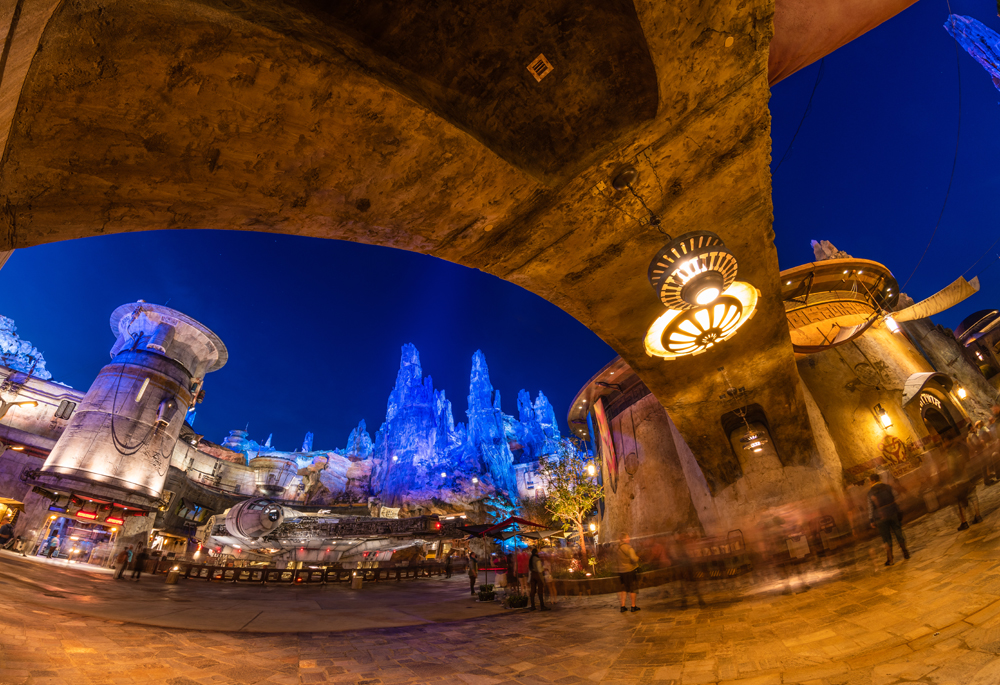 Walt Disney World couldn’t accurately forecast attendance for a new land under normal circumstances and after seeing how a similar scenario played out months before in California. There’s no way they have an accurate picture of long-term attendance trends during the midst of an unprecedented pandemic and recession.

Like everyone else, Walt Disney World is making this up as they go. I know that it’s fun to envision Disney as this prescient company on the bleeding edge of everything–harnessing data and analytics to incredible advantage–but that’s pretty far from accurate in normal circumstances, let alone right now. To be disabused of that notion, look no further than Disney’s recent communications (or lack thereof), plus the fact that new ticket sales and the reservation systems are still down. Then consider how much money is being lost or left on the table as a result.

Nevertheless, hopefully today’s updates are a sign that the advance theme park reservation system is about to go live on My Disney Experience and DisneyWorld.com. At the very least, it’s a good reminder to get your ducks in a row so you’re prepared to book dates as soon as APRs (it’s like ADRs, but for park access…and not to be confused with annual percentage rate) open up. We’ll continue to closely watch this, monitoring the official app and website for the slightest changes–if you want an immediate heads up when the new theme park reservation system launches, sign-up for our free email newsletter!

Do you think capacity and demand will dictate that the advance theme park reservation system will be necessary through 2021? Annoyed at the lack of updates from Walt Disney World about reservations/tickets/refunds/etc? Do you have plans to visit Walt Disney World this summer or fall, or have you cancelled? Do you agree or disagree with our assessment? Other thoughts or concerns? Any questions we can help you answer? Hearing your feedback–even when you disagree with us–is both interesting to us and helpful to other readers, so please share your thoughts below in the comments!