In this post, we’ll take a look at dates when different on-site and off-site hotels are slated to reopen around Walt Disney World. The good news here is that there are a ton of nearby third party accommodations available for booking prior to when Magic Kingdom and Animal Kingdom reopen on July 11, 2020.

When it comes to official Walt Disney World properties, the Deluxe Villa Resorts reopen on June 22, 2020. Unfortunately, it’s not possible to book new reservations right now via Disney unless you’re a DVC member–meaning these are not viable options for many tourists.

After that, there’s a lot of uncertainty about when the remaining resorts at Walt Disney World will reopen. Our updated hotel reopening post speculates that these could begin to open on July 5, 2020. However, that’s with some significant caveats and directly contradicts what Disney reps are telling guests…

With regard to the potential July 5, 2020 opening date, the key here is some hotels. Coronado Springs Will Likely Host Resort for NBA at Disney World Starting in July, which means that resort and Gran Destino Tower likely won’t reopen until October at the earliest. Other hotels less likely to open are Animal Kingdom Lodge — Jambo House, the Port Orleans Resorts, and the All Star Resorts.

Most likely to reopen sooner rather than later would be any resort connected to a DVC property that’s opening, any resort with non-bus transportation (Skyliner, monorail, boats), and resorts that don’t typically host special events. Past precedent also plays a role–Port Orleans French Quarter closed entirely for ~6 months after 9/11, and Port Orleans Riverside operated a small fraction of its rooms. 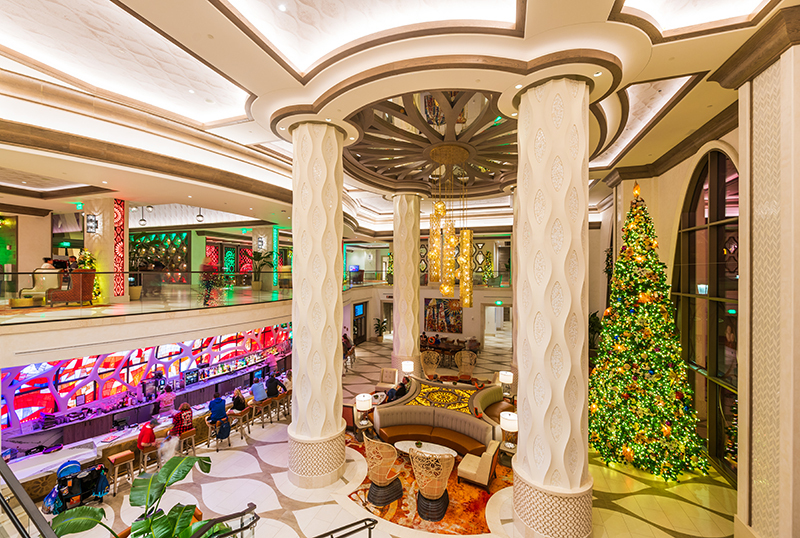 However, our speculation here directly contradicts what phone reps for Walt Disney World have been advising many guests who have called to inquire about bookings at other hotels.

A number of people have reported being told: “At this time, there are not plans to reopen other Walt Disney World resort hotels this year” (or similar variants of that quote). While that is startling, the operative language there is at this time. 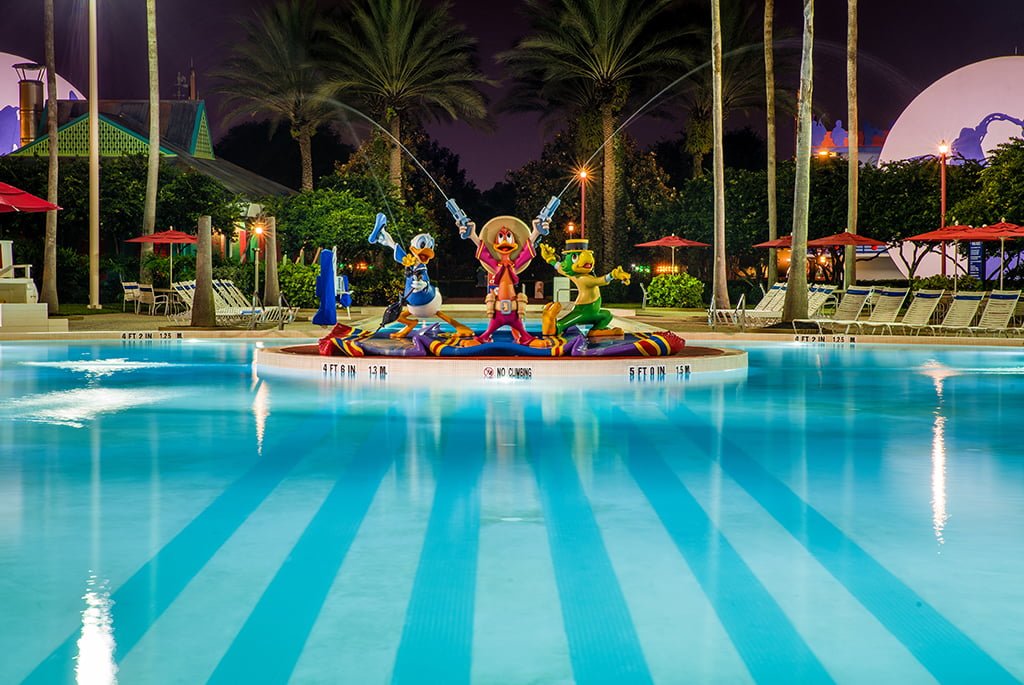 Disney is incredibly adept at equivocation, and employs it constantly to issue ambiguous statements. Disney’s go-to weasel words are “at this time…no plans.” When you see or hear those words used by Disney, it’s safe to ignore whatever’s being said as the surrounding language renders it meaningless. Beyond that, frontline Cast Members are not privy to inside information–they know what you know, which is that no reopening date for the other Disney-owned hotels has been announced.

With that said, we do have reopening dates for several hotels that are on-site at Walt Disney World but not owned by Disney. Here’s what we know thus far…

The Swan and Dolphin, located within walking distance of Epcot and Disney’s Hollywood Studios in the Crescent Lake Resort Area, announced they will begin reopening to guests as of July 29, 2020. Subsequent to that, it was revealed that Major League Soccer is Coming to Walt Disney World in July, and Swan & Dolphin will host players and staff. 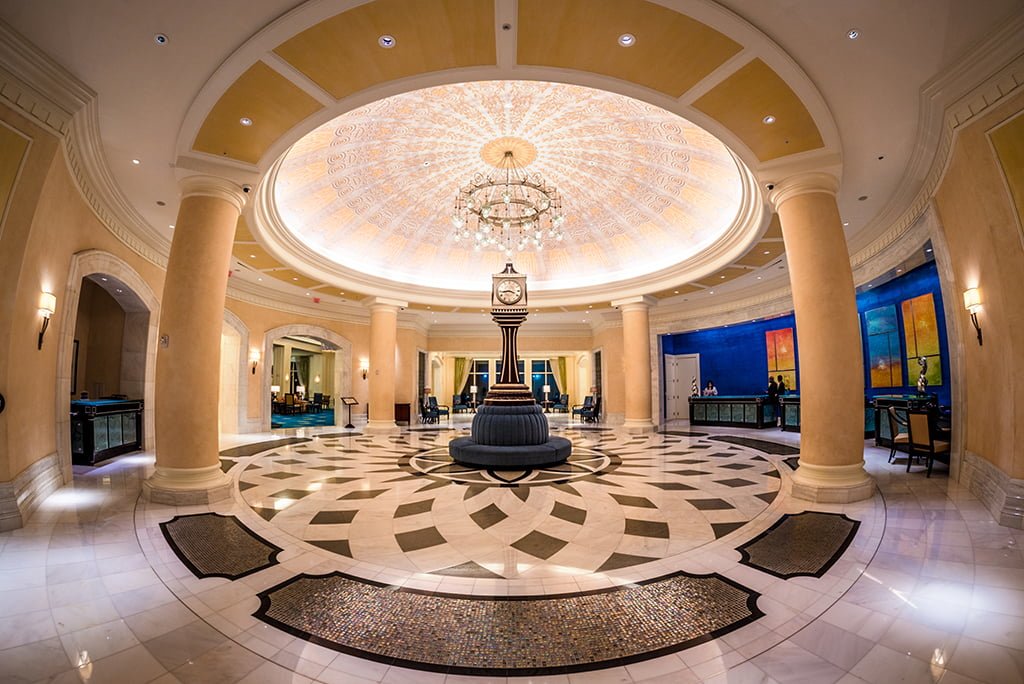 Hilton Orlando Bonnet Creek and Waldorf Astoria Orlando have both announced a reopening date of July 1, 2020. The sister resorts are currently taking reservations for that date, but have not yet released any special offers beyond their standard Florida Resident, Teacher Appreciation, Long Weekender, government/military, AAA/AARP, and travel agent discounts.

Any new reservation made by August 31, 2020 can be cancelled or changed free of charge, up to 24 hours before your scheduled arrival day. 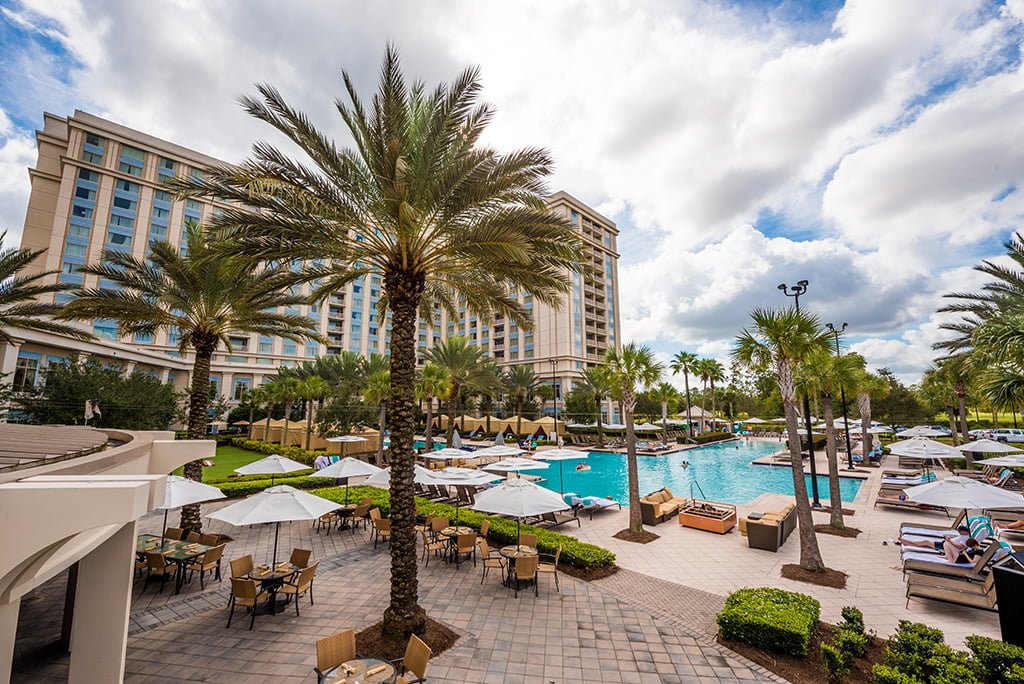 In searching random dates between now and December 2020, we found base rates under $150/night for the Hilton Orlando Bonnet Creek. For the Waldorf Astoria, our searches found rates starting at $222 per night. These rates are before the $45/night resort fee charged at each.

Both of these resorts are quite nice. The Hilton Orlando Bonnet Creek is Deluxe Resort-caliber, and the Waldorf Astoria offers luxurious and opulent accommodations above any Disney-owned hotel. (See our Waldorf Astoria Orlando Review.) 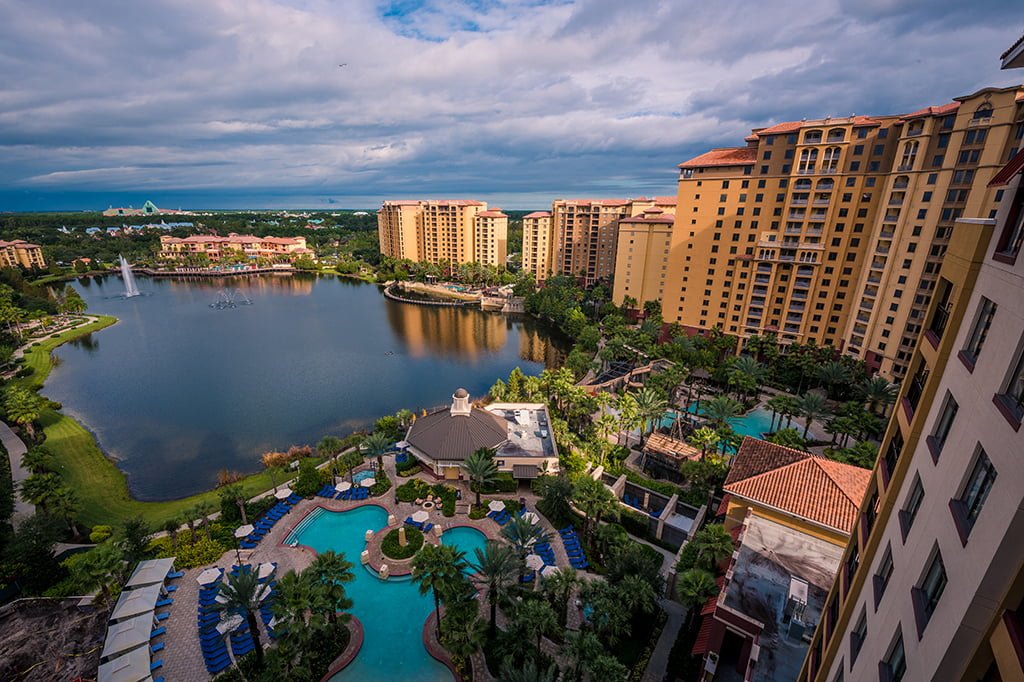 Also in the Bonnet Creek Resort Area is the Club Wyndham. While this timeshare has not officially announced a reopening date, reservations through June 30, 2020 were previously cancelled and bookings are now available beginning July 1, 2020.

Moreover, the Wyndham Grand Orlando Resort Bonnet Creek has already reopened as of the beginning of June. The Wyndham is already offering a range of special offers, including the “Ultimate Staycation Package” with waived resort fees, late check-out, and more. 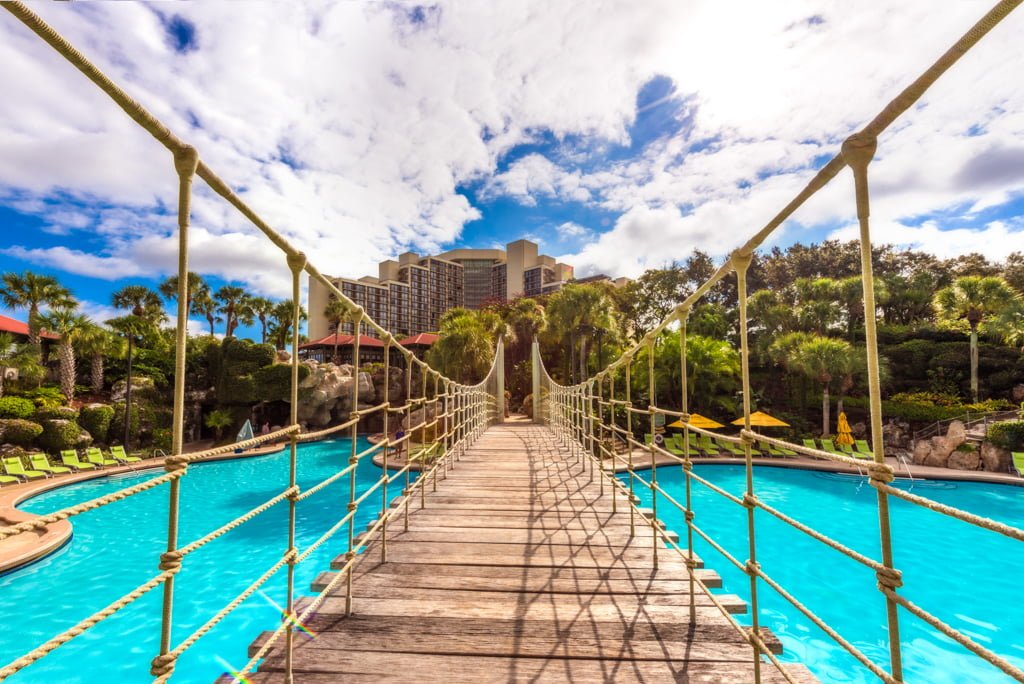 We are huge fans of this resort and Hyatt generally, which is borne out in our Hyatt Regency Grand Cypress Review and also the hotel’s #1 ranking in our Top 10 Off-Site Hotels Near Walt Disney World List. 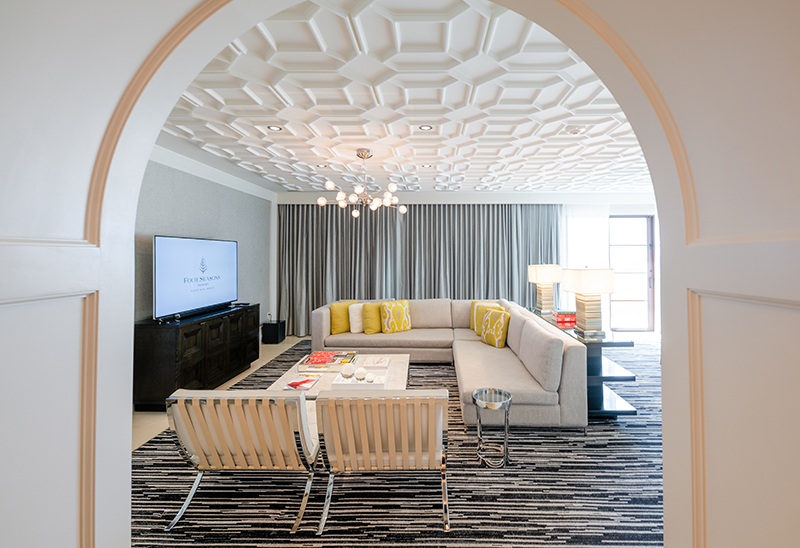 Some of the Four Seasons Orlando restaurants have begun to reopen, but it’s unclear whether all will be operational when the resort begins welcoming guests. (In general, we’ve had a difficult time ascertaining when resort restaurants will reopen.) 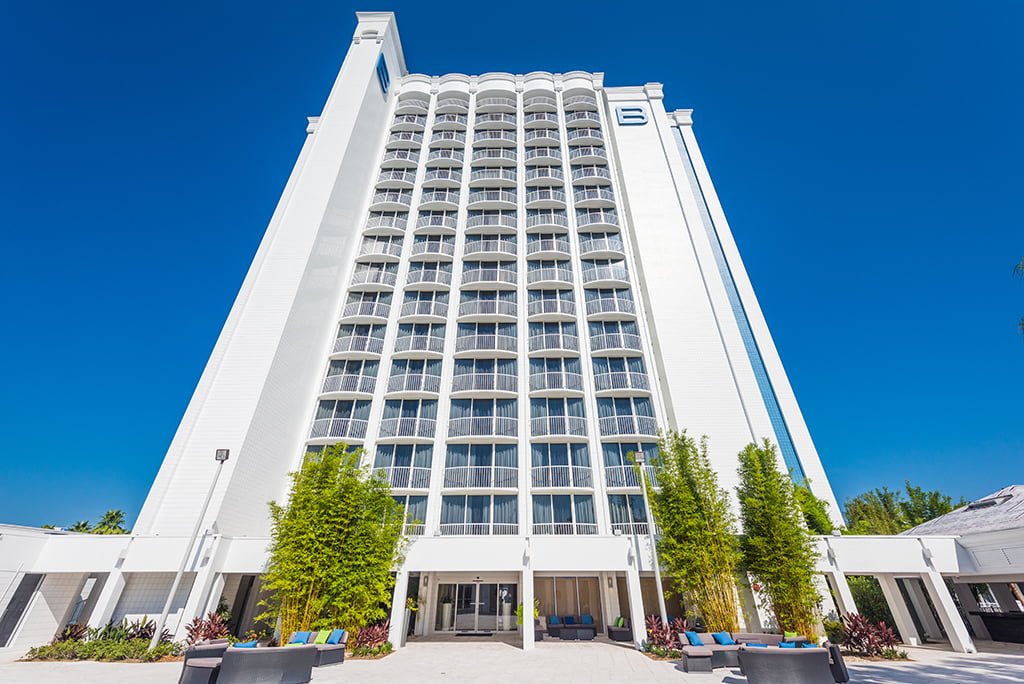 It appears that Wyndham Garden Lake Buena Vista and B Resort & Spa are both presently open, with other hotels on the list above reopening as of July 1, 2020. Judging by online booking options–which are not always accurate–other Disney Springs hotels are planning to reopen in the coming weeks/months. We’ll await official confirmation of that from the hotels and update accordingly. 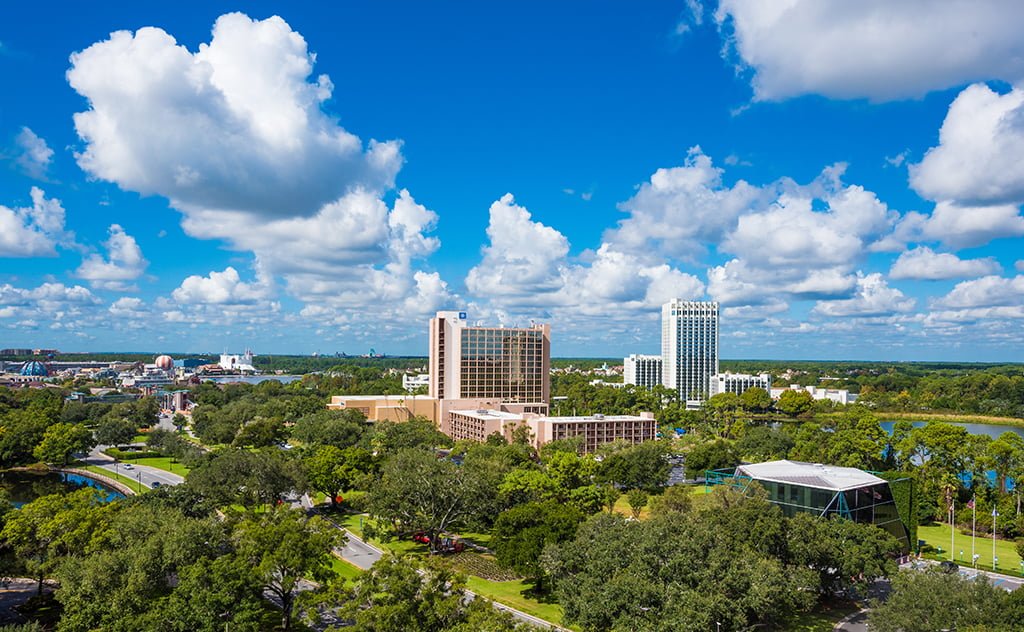 With FastPass+, Advance Dining Reservations, Extra Magic Hours, and the Disney Dining Plan all cancelled, there are fewer justifications than ever to stay on-site (and that was already eroding even before this–see Is Walt Disney World’s On-Site Advantage Disappearing?). That makes these hotels–which range in price from under $100 to over $300 per night–more competitive with Disney’s own resorts.

Moreover, Walt Disney World is currently not allowing new hotel reservations, and even when they were, discounts were pretty tepid. We still believe that Walt Disney World will offer aggressive resort discounts later this year, but there will likely be lag in that. 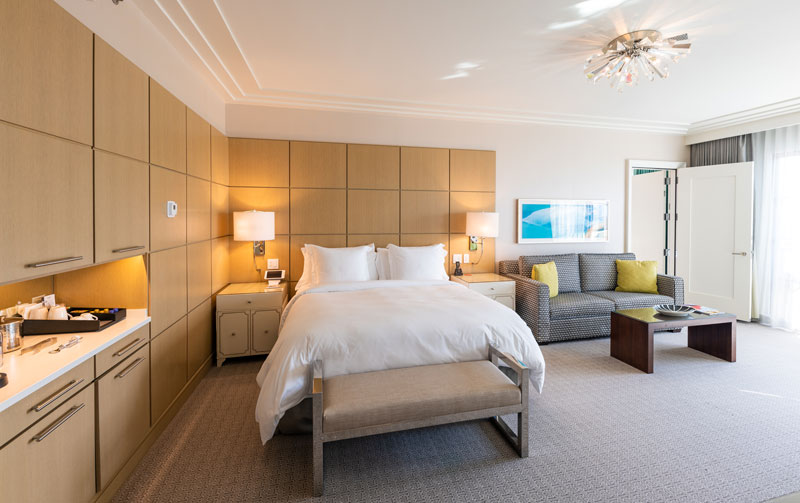 For the most part, these hotels are Moderate or Deluxe-caliber, with some surpassing Walt Disney World’s best resorts (except with regard to theme and location). All of them easily beat Disney in terms of pricing and value for money, and that’s factoring in potential resort and parking fees.

Ultimately, there’s no shortage of solid hotel options available for booking at or near Walt Disney World for travel dates between now and July 1, 2020. If you’re thinking about a late summer or early fall vacation to Florida, we’d strongly recommend one of these third party options. Each have their own advantages, so consider what’s important to you (lazy river, world-class dining, walking distance to Disney Springs or Epcot, etc.) and book accordingly!

Do you have a favorite third-party hotel at or near Walt Disney World? Would you stay off-site or at a non-Disney property given the erosion of on-site advantages? Does the disparity in value for money make a difference to you? Do you have plans to visit Walt Disney World this summer or fall? Do you agree or disagree with our assessment? Other thoughts or concerns? Any questions we can help you answer? Hearing your feedback–even when you disagree with us–is both interesting to us and helpful to other readers, so please share your thoughts below in the comments!