Wondering what is in store for Disneyland’s 60th Anniversary? Here’s some info about the new parade, fireworks, and World of Color for the “Diamond Celebration” at Disneyland Resort, beginning May 22, 2015.

UPDATE: the festivities have started–skip this preview and read my Ultimate Disneyland 60th Anniversary Diamond Celebration Guide for current info and tips.

We thought it would be fun to take a look at what’s coming, speculate a bit, and offer some commentary on the celebration as a whole. As with all of our posts, we strive not to regurgitate press releases or parrot info that’s widely available, and with countless other blogs and Disney’s own PR department covering the ‘just the facts’ info that has thus far been made available, we aren’t going to fixate on that too much. Instead, this is basically us opining on the announcement and the potential of each offering.

First, I have to say I’m absolutely stoked about Disneyland’s 60th Anniversary. I had just gotten back into Disney during the Disneyland 50th Anniversary with a visit to Walt Disney World, but hadn’t yet visited Disneyland at that time, so I didn’t get to truly experience the festivities (save for the “New Magic Imported From…” at Walt Disney World as part of the Happiest Celebration on Earth) there.

I’m very much an “Anniversary Person” and the anniversaries I’ve experienced for Walt Disney World’s 40th and EPCOT Center’s 30th on those specific days have been fun, but lacking in terms of what I think they should have been. The last ‘big’ Disney anniversary I experienced in person was Walt Disney World’s 25th Anniversary, and I was only 11 at the time, and don’t remember a ton of it, besides the merchandise my parents bought. I also remember the Cinderella Castle Cake, which I loved as a kid. (Sorry, hope I don’t get my Fan-Card revoked for that!)

Anyways, let’s take a look at what we know is coming, along with some things that are likely coming…

Disneyland Forever Fireworks – This is the new fireworks show that will be the successor to ‘Remember… Dreams Come True’, and will be another show rooted in nostalgia by Steve Davison, “utilizing the whole park as a stage.”

I can’t imagine any show surpassing ‘Remember… Dreams Come True’ in terms of playing up nostalgia, but so long as the team behind this show keeps that same winning formula intact and builds upon it with new technology, including Sleeping Beauty Castle and Main Street projection mapping, I think that it could be a success.

With this, I think Disney will aim for more mainstream appeal, as it sounds like the show is going to feature classic films instead of classic attractions. I also suspect Disney will shoehorn popular characters (“new classics”) into the show, alienating some hardcore fans but winning over casual guests. If Olaf isn’t in this show, I would be absolutely flabbergasted. Still, I expect lots of nostalgia and a lavish show with Davison utilizing the new tools he’s had a chance to play with in Paris and Tokyo.

Regardless, there will be two new songs, one of which is by Richard Sherman (the Disney Legend, not the Seahawk) and that’s a good thing. WE REPEAT, A NEW SONG BY RICHARD SHERMAN. THIS IS NOT A DRILL. 🙂

Disney Paint the Night Parade – This is the new parade that is basically the next generation of the Main Street Electrical Parade.

While Disneyland touts this as an new parade, it is not. This is a parade that debuted in Hong Kong Disneyland last October, except with a couple of new floats (rumored to be recycled from Tokyo Disneyland’s Jubilation parade, with some lights added) thrown into the mix.

This is not necessarily a knock on the parade. I already wrote a Disney Paint the Night Parade Review, which contains a lot of photos and additional thoughts, but suffice to say, I think this parade has promise if tweaked from the Hong Kong original. With that said, I think it is definitely not in keeping with the otherwise nostalgic tone of Disneyland’s 60th Anniversary. If I had to predict the reaction to this parade, my guess would be that casual tourists will love it since it’s fairly hip and modern, and Disneyland regulars won’t care for it…for pretty much the same reason. I’m more or less indifferent to this parade as it exists in Hong Kong Disneyland, but some elements just some a bit too modern for me on Main Street in Walt Disney’s Original Magic Kingdom. I don’t doubt that most guests will love this parade, though.

World of Color: Celebrate the Wonderful World of Walt Disney! – This is a special edition of World of Color for the 60th Anniversary that will skew heavily towards Walt Disney-era films, with Mickey Mouse as the host.

It’s great to see this happening. World of Color’s ability to change shapes has mostly led to evil, such as the ‘World of Frozen’ that Disney bestowed upon us this year. Now, Disney gets the chance to revisit the original World of Color, which skewed more towards Walt-era classics. This will be narrated by Mickey Mouse (and the original wasn’t), but I hope Disney takes the opportunity to revisit the original score that features beautiful mixes from Alice and Wonderland, among other Walt Disney-era classics. This original version was pulled at the last minute before the debut of the show, but the source audio leaked out recently, and I absolutely love it. If they utilize portions of this original audio remains to be seen, but given that Disney has already made this version, and given that it is heavy on Walt-era stuff, it makes sense. It would also be great to see the Chernobog figure rise out of Paradise Pier Bay!

Re-Imagined Fantasyland Attractions (rumored/not announced) – Disneyland is expected to be sprucing up several of the Fantasyland dark rides, giving them fresh coats of paint, new Audio Animatronics, and modern technology, such as projection mapping. This wasn’t announced at the press conference, but Micechat has been rumoring that it will occur for some time–one attraction is already done–and the refurb calendar corroborates their rumors…

We’ve already seen this come to fruition in Alice in Wonderland, and the results were unequivocally spectacular. I have long been a critic of the Fantasyland dark rides at Disneyland, which I think receive a pass from hardcore fans because of their nostalgia for these attractions. The upgrades slated to occur in Peter Pan’s Flight and other dark rides demonstrate Disneyland’s commitment to maintaining Walt Disney’s legacy, and also to bringing the park’s older attractions up to modern standards. If these upgrades are made as tactfully as the ones to Alice in Wonderland, “New Fantasyland 2.0” will be the talk of most repeat guests visiting for Disneyland’s 60th Anniversary. I really hope these proceed as rumored, as I think this could be the big hit of Disneyland’s 60th Anniversary for regulars.

Although not a Fantasyland dark ride, if the scrims up in Haunted Mansion are any indication, Hatbox Ghost will be making an appearance for the 60th. Likewise, updates are expected to the Matterhorn, too.

Grizzly Peak Airfield (announced, but not as part of the 60th) – An expansion to Grizzly Peak that swallows Condor Flats and gives it the same ‘National Parks’ aesthetic. Another thing that isn’t *specifically* for the 60th, but has already been announced, and will likely be hyped up later…

To me, this seems like a ‘place-making’ move, but I’m incredibly excited, nonetheless. Condor Flats had a ton of potential, but that was never fully realized, and the land felt dated as the rest of Disney California moved away from the late-1990s look. Grizzly Peak has always been a strong point of the park, and this move should make the land even stronger. Here’s hoping they bring in vintage National Park cruisers to give the land some added kinetic energy!

In addition to these major offerings, Sleeping Beauty Castle will receive a new color scheme (in line with the original, as seen in Hong Kong at the top of the post) with ‘diamond’ decorations that will be removed after the 60th Anniversary. Likewise, Carthay Circle Theater will receive diamond decorations. The concept art for this isn’t quite as stunning, but it looks like a nice effort that will be enjoyable as a temporary thing.

Ultimately, I think the big question left unanswered as of right now is how Disneyland will simultaneously appease both the mainstream guest demographic and the hardcore Annual Passholder demographic. It seems like the 50th Anniversary did a good job of this with a heavy emphasis on history and Disneyland attractions of the past and present. My one concern here is that the focus is more on the history of Disney films, rather than parks. Disney paying tributes to its films is commonplace, and just because people are serious fans of the parks doesn’t mean they are serious animation fans. With that said, even though the management team isn’t the same as it was for the 50th, I think Disneyland’s current team has a good understanding of its fans going into the 60th Anniversary, and they will do their best to appease both those crazy hardcore fans like me, and average guests who may have no clue what the Peoplemover, America Sings, or Carousel of Progress even are.

I don’t doubt that some things will be cringe-worthy to hardcore fans like me (as I said above, you can bet Olaf will make an appearance…or 10, and the Mack truck from Paint the Night going down Main Street is going to feel out of place, I think). At the end of the day, though, the TLC that the Fantasyland attractions will receive, plus the other new entertainment, other little olive branches extended to Annual Passholders, and the general improvements made around Disneyland and Disney California Adventure will make this anniversary celebration a winner from pretty much every perspective. (Unless the new fireworks and World of Color are serious downgrades from their predecessors, which I doubt.) Personally, I can’t wait to see Disneyland’s 60th Anniversary take shape, and am really looking forward to it! 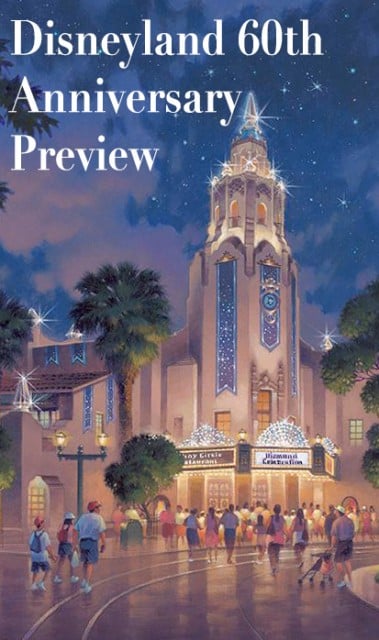 If you’re planning a Disneyland 60th Anniversary trip, make sure to read our trip planning series, including what to pack, whether you should stay off-site or on-site in a Disney hotel, where to dine, and a number of other things, check out our comprehensive Disneyland trip planning guide!

Are you looking forward to Disneyland’s 60th Anniversary? Planning to make a trip out to see the new offerings? What, if anything, excites you about the new entertainment for the 60th? Share your thoughts or questions in the comments!