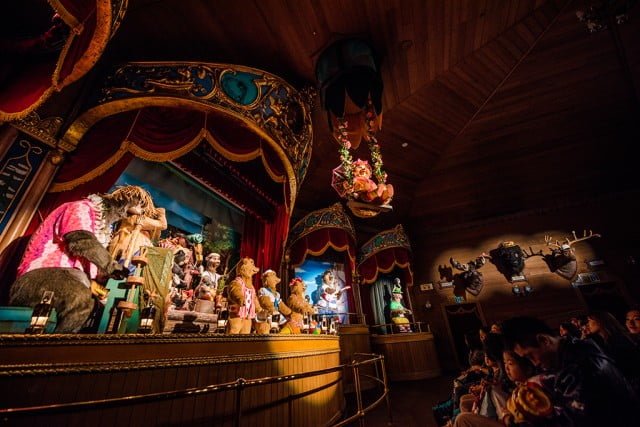 As a huge Country Bear Jamboree fan, I figured I owed it to other fans of the attraction by offering a photo tribute to the attraction via photos I recently took at Vacation Jamboree. I previously covered Country Bear Christmas/Jingle Bell Jamboree, so this is also a good counterpart to that post.

Since the United States versions mostly disappeared before the era of digital photography and not many great photos exist of the show online, I figured my contribution to the Country Bear ’cause’ would be photographically. I’ll start by offering some limited thoughts on the significance of Country Bear Jamboree, then by linking to articles from other sources, finishing with my own “trip report” style thoughts on the experience of Country Bear Vacation Jamboree.

I’ve said this ad nauseam on this blog, but it bears repeating since so many people misunderstand Country Bear Jamboree: this is Disney at its best: a mix of quirkiness, wry humor, charming characters, and even edginess. It’s not simply a bunch of bears with a folksy twang singing country music. It’s an intelligent show that simultaneously pays tribute to and satirizes country music and southern culture.

Aside from that Passport2Dreams article, there are a handful of others that are necessary reading for all Country Bear Jamboree fans and critics (so, everyone!). First, there’s this piece detailing how Marc Davis supposedly thought that Disney should have left the original alone. (I disagree. I think both Country Bear overlays are tonally in keeping with the original, and Mr. Davis’ opinion is likely skewed by his lack of involvement with the overlays, and a sense of ownership in the original.)

Second, there’s this historical information about Country Bear Vacation Hoedown on Yesterland. Third, some interesting concept art for an aborted Sky Crown at Mineral King project involving the Country Bears that never came to fruition. Fourth, some audio from Bear Country and beyond that includes Vacation Hoedown. Fourth, here’s the full script to Vacation Hoedown, in case you want to reenact it with your friends.

Finally, this 2001 farewell to Vacation Hoedown at Disneyland. I assume there are no fewer than 2,105 other scholarly pieces on Country Bear Jamboree out there, so if you know of any others, please feel free to share links in the comments below.

As, for my experience, like any proud Country Bear Jamboree fan and completionist, I was excited to see Country Bear Vacation Jamboree in Tokyo Disneyland just so I had seen every show… 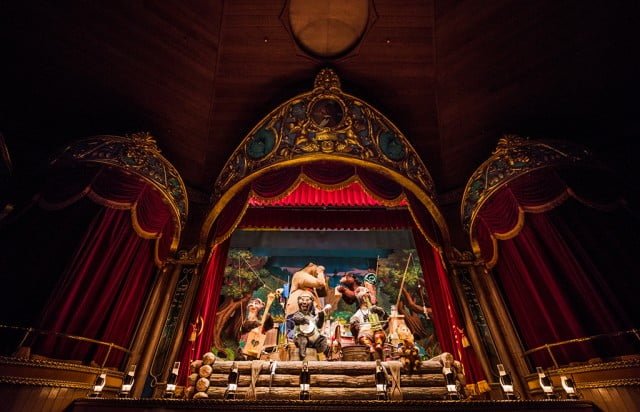 Although Country Bear Vacation Hoedown ran at Walt Disney World until 1992, I don’t remember ever seeing it, so unlike Country Bear Christmas, I went into Tokyo Disneyland with no emotional attachment to it.

Even though most of my attachment to Country Bear Christmas grew out of repeated listenings to the Musical History of Disneyland, Vacation Hoedown wasn’t even on regular rotation for playings of that. 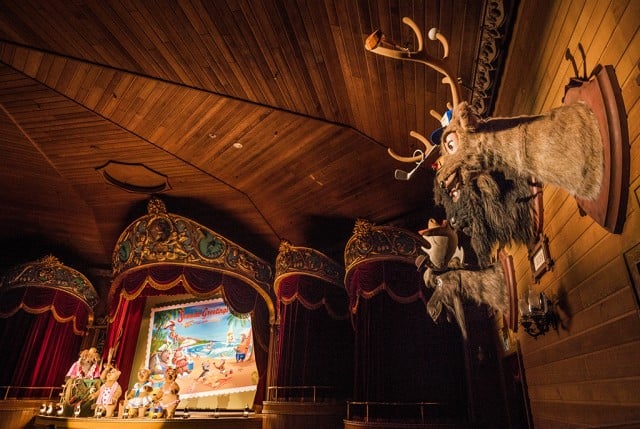 Because of this, I had no sense of urgency to see Country Bear Vacation Jamboree as soon as we arrived at Tokyo Disney Resort. We didn’t even make it to Tokyo Disneyland until our third day at the resort, and then we didn’t even rope drop it!

We did see it our first morning in Tokyo Disneyland, and it was well worth the wait. The waiting area for the Country Bear Theater has a ton of detail in Japan, establishing that the bears are big-time performers who are quite accomplished, but also quite personable (dare I say, personabear?!). This is conveyed through magazine covers, family photos, and all sorts of other things all showcasing that clever Marc Davis humor. 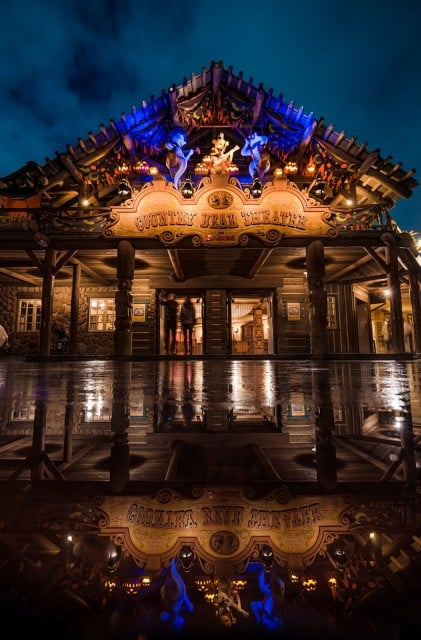 For Vacation Jamboree, some ‘vacation’ props are added to the mix, including luggage and summer vacation photos of the bears. My favorite detail here is the luggage, which even has stickers of places the bears have visited…including Grizzly Gulch!

As they say, no good idea dies in Imagineering. 😉 It’s coincidence, I’m sure, and I suspect no one in WDI even remembers this sticker, but it would be cool if they’d add a Country Bear Jamboree nod or two in Grizzly Gulch, just the same. 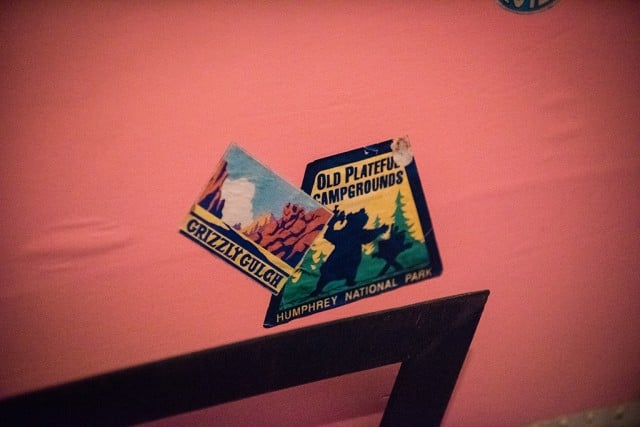 As for the show itself, I wasn’t sure exactly what to expect. Obviously, I knew it was the ‘vacation’ overlay to Country Bear Jamboree, but I wasn’t sure what that entailed. I figured it meant mostly summer camp, road trips, and that sort of thing, and it largely did. 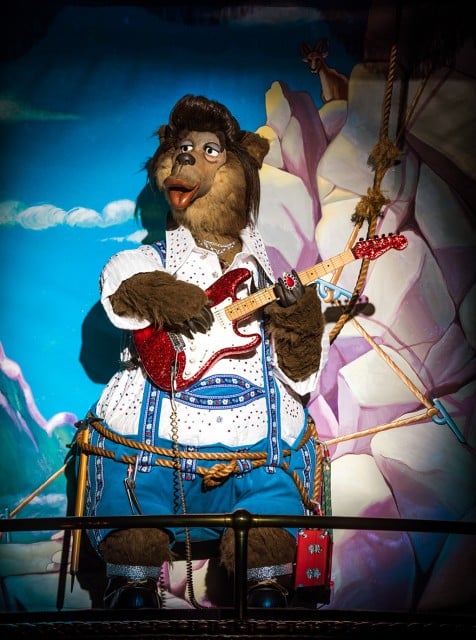 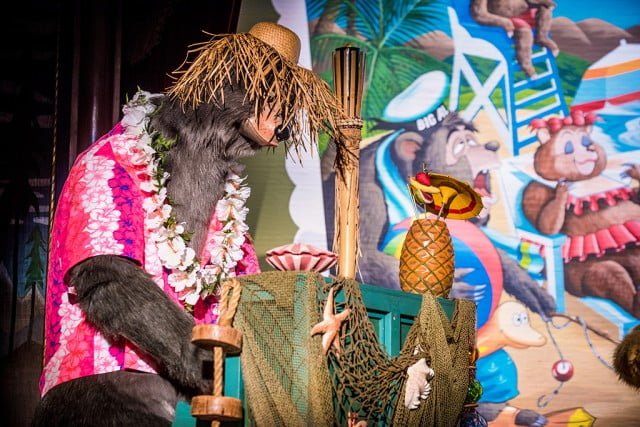 A very laid back Gomer, clearly the type of bear who would enjoy the island lifestyle. 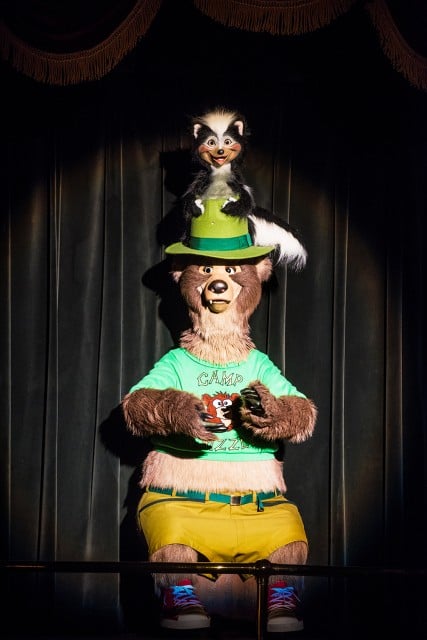 Henry, whose old camp shirt “still fits!” and Randy as a skunk… 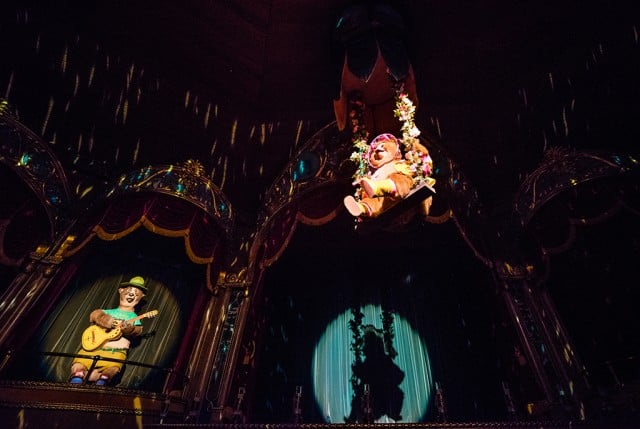 He also continues his normal flirtations with Teddi Barra, performing a nice, albeit not exactly vacation-ish, version of “Singin’ in the Rain” with her. 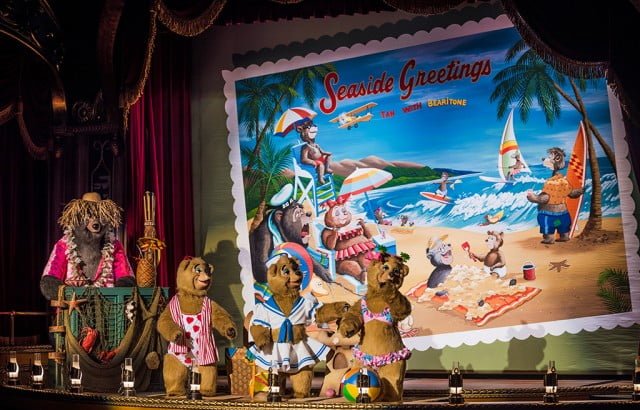 The second catchiest song of the show is “California Bears” (in the tune of “California Girls” by the Beach Boys) by the Sun Bonnet Trio, Gomer, Max, Buff, and Melvin. 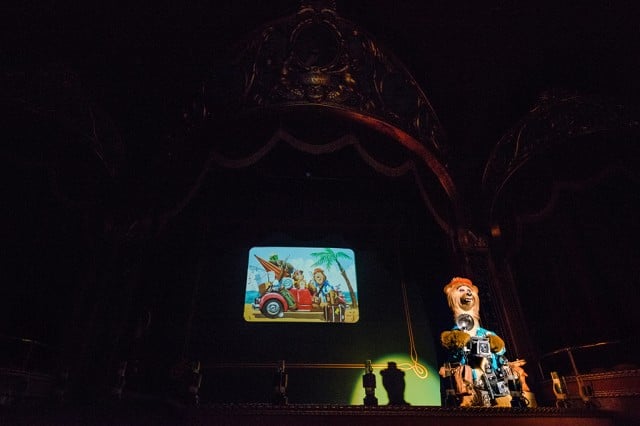 Wendell’s “On the Road Again” told via a vacation slideshow, is another highlight, and the show could easily be titled “Wendell’s Series of Unfortunate Events.” The sight gags in the slideshow are pretty clever–better than those in the regular show, if you ask me. 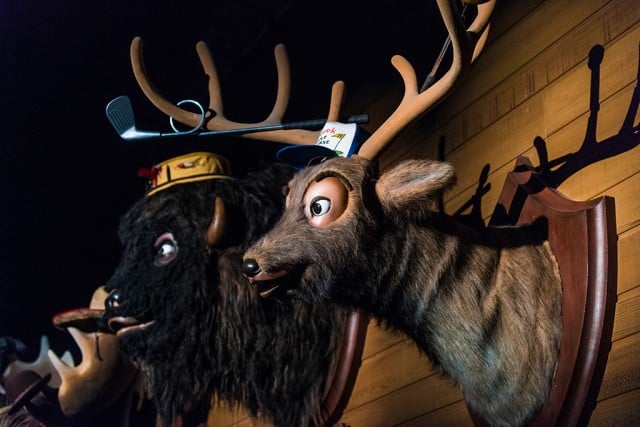 Of course, Max, Buff, and Melvin are here, although they seem to lack any good zingers… 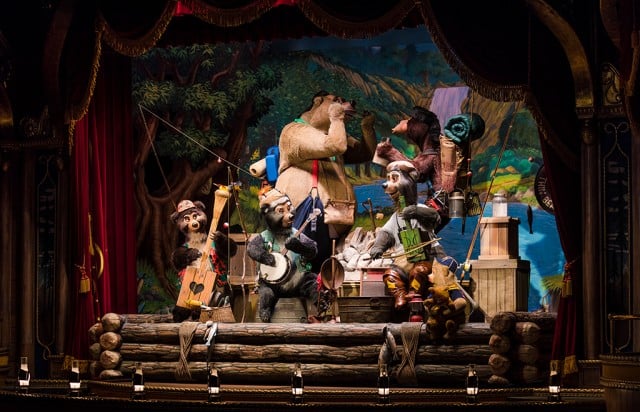 The Five Bear Rugs perform “The Great Outdoors” in Japanese. 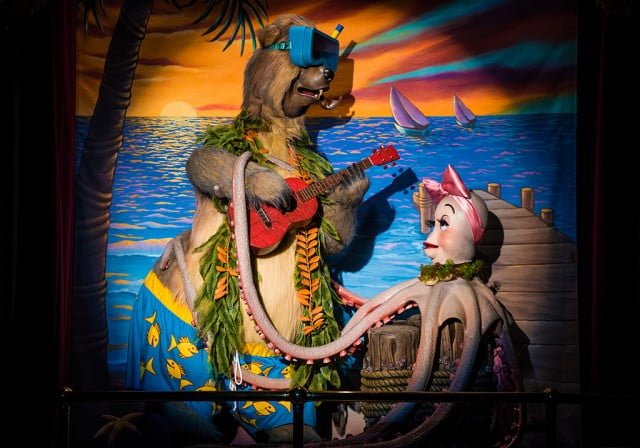 Terrence and his octopus girlfriend, Delores were interesting. In both seasonal shows in Tokyo Disneyland, Terrence has a counterpart (a penguin in Jingle Bell Jamboree), as he did in the seasonal US shows. However, in both cases, the Tokyo Disneyland counterparts are more elaborate.

In the US versions, they were stationary; in the Tokyo Disneyland versions, the octopus and penguin are Audio-Animatronics. No clue why this change was made, but it’s a nice plussing for Tokyo. 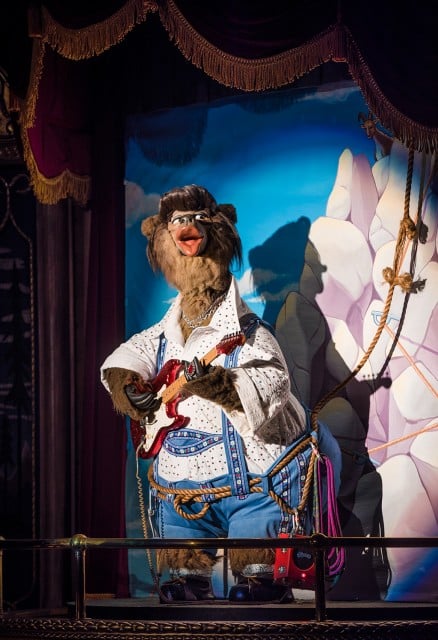 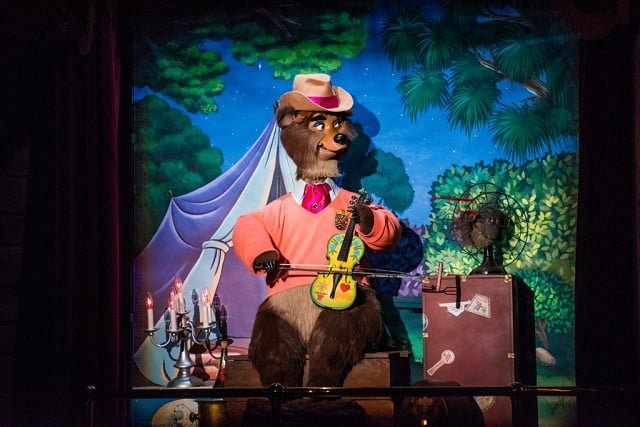 Ernest’s attire is totally different here than in the US versions–he appears much more debonair in the Tokyo Disneyland version. 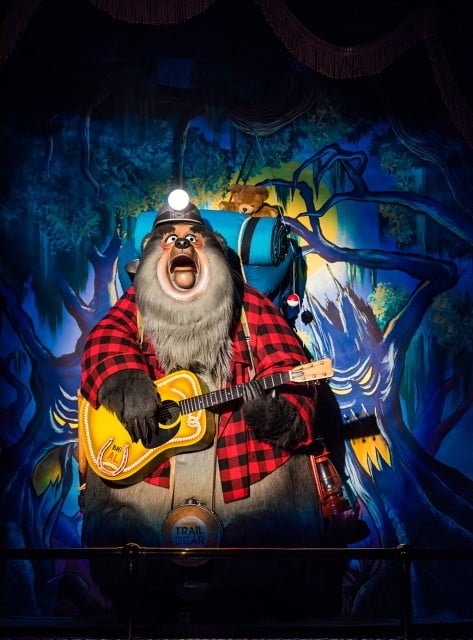 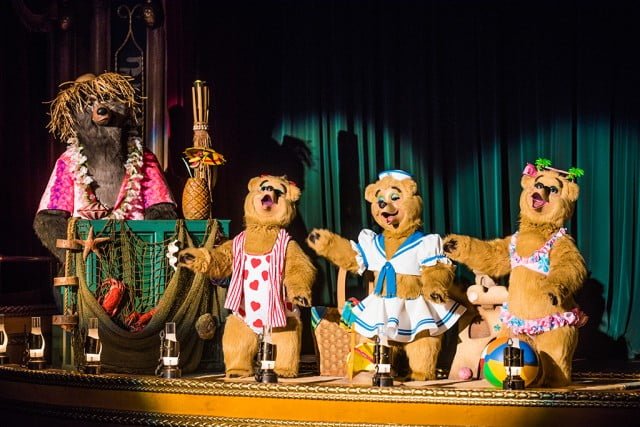 There are some really great props and costuming throughout the show. This isn’t just a simple overlay, which I think is what adds to its appeal. 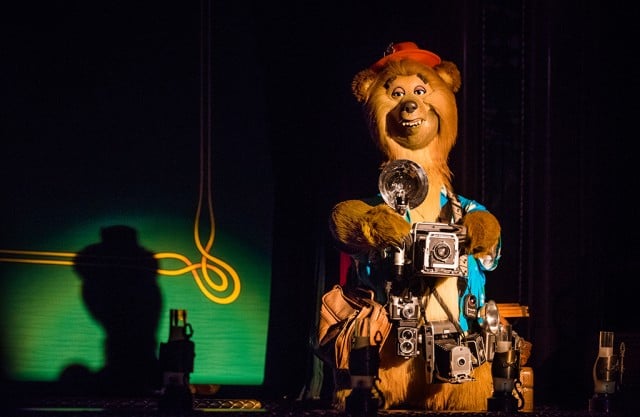 It should come as no surprise that my favorite costume of the bunch is Wendell. From his dorky grin to his many cameras, Mickey Mouse camera strap, and tourist attire, this is me in bear form. 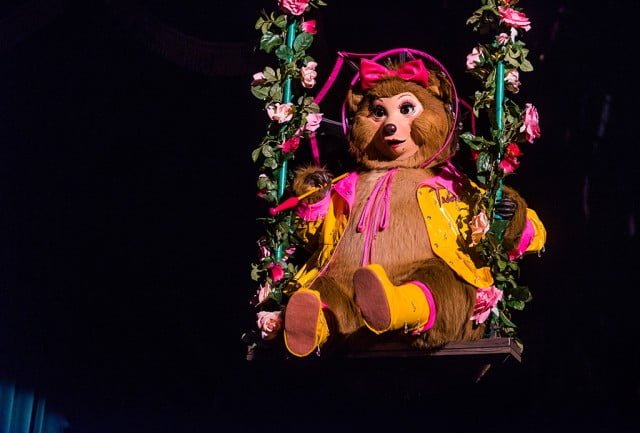 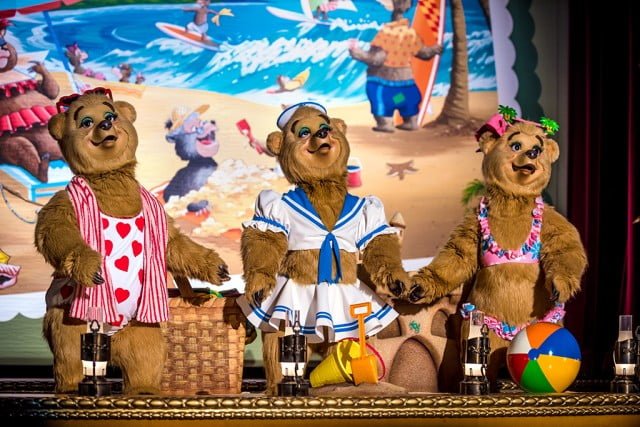 As catchy as “California Bears” is, by far the catchiest part of the show comes in the finale, when the bears sing “Vacation.”

This entire finale is in Japanese, but if you decide to listen to the full show, you’ll probably be muttering fake-Japanese and singing the English parts for days. Watch/listen to this video, starting at the finale, at your own risk. 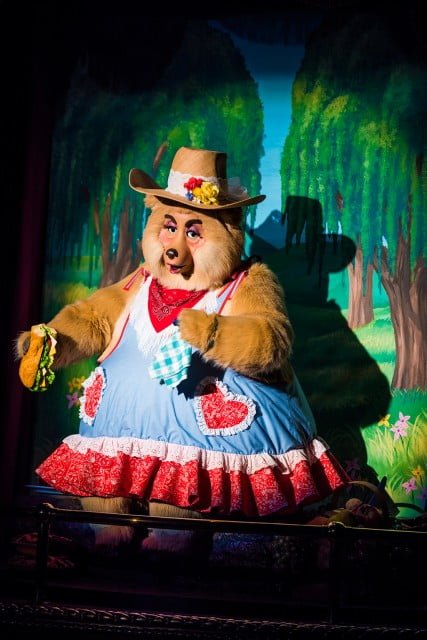 One thing I thought was really bizarre about the show was that Trixie sang “Achy Breaky Heart”–in both English and Japanese. These dim-witted (well, some of them) bears manage to fluently alternate between English and Japanese, but that’s not the shocker here, as they do that in both of the other shows.

The odd thing is that Trixie would sing a song from the 1990s that really doesn’t fit the show. Given that this song came out in 1992–the year the Magic Kingdom version closed–it never played in the Magic Kingdom or Disneyland versions. 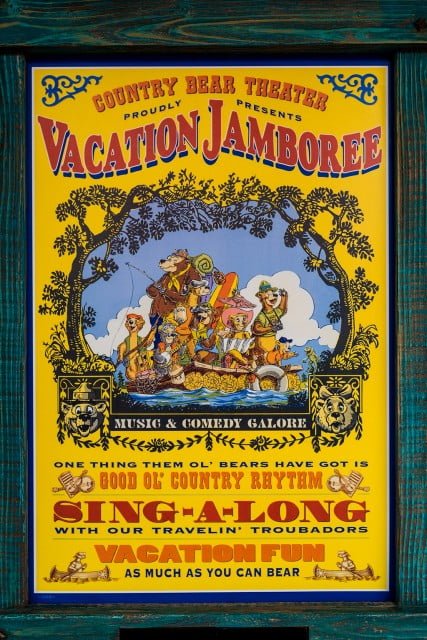 The Tokyo Disneyland version didn’t debut until 1994, so I’m guessing someone at the Oriental Land Company was a big Billy Ray Cyrus fan and thought its addition would give the show more relevance with current (at the time) audiences?

I really don’t know how else to explain its inclusion, but it’s sort of funny. Now that Achy Breaky Heart is one of those things we look back on from the 1990s and cringe over, it seems out of place in the show. 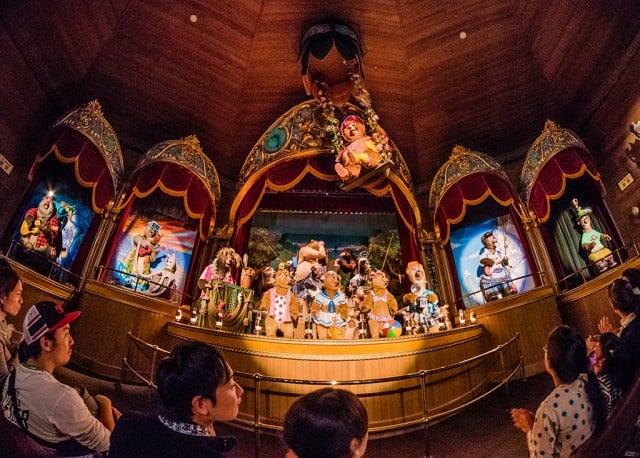 Overall, I enjoyed Country Bear Vacation Jamboree a lot more than I expected. It’s a fun change of pace from the regular show, and while I think it’s the weakest of the three rotating shows in Tokyo Disneyland, “weakness” is relative here, as I think Country Bear Jamboree and Jingle Bell Jamboree are both excellent. This is just a rung below those as slightly less cohesive.

With that said, this does have some catchy tunes, particularly “One the Road Again,” “California Bears,” “Singin’ in the Rain,” and the “Camptown Races / She’ll Be Coming ‘Round the Mountain / Vacation” finale. The visuals here are also strong, with some great costuming for every bear.

If you get the chance to see Country Bear Vacation in Tokyo Disneyland, I’d highly recommend it, and this is likely especially true for anyone who has nostalgia for the original shows at Walt Disney World or Disneyland. 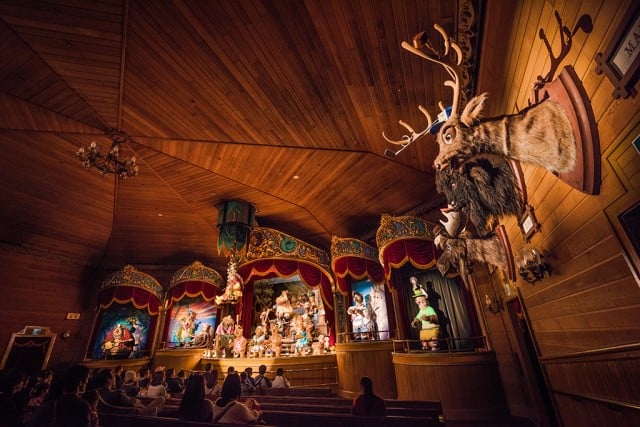 Hope you enjoyed this photo tribute to Country Bear Vacation Hoedown! You can find higher resolution versions of many of these photos in my Tokyo Disneyland Photo Gallery.

If you have any facts, info, or anecdotes about Country Bear Vacation Hoedown to share, I’d love to hear them. Despite this showing lasting until 2001 in Disneyland, it seems that not a whole lot is known about it.

Did you ever see Country Bear Vacation Hoedown in Walt Disney World or Disneyland? Does it still playing in Tokyo Disneyland make you want to take a summer/fall trip there? Any other thoughts about the Country Bears? Hearing from you is half the fun, so please share your thoughts in the comments!