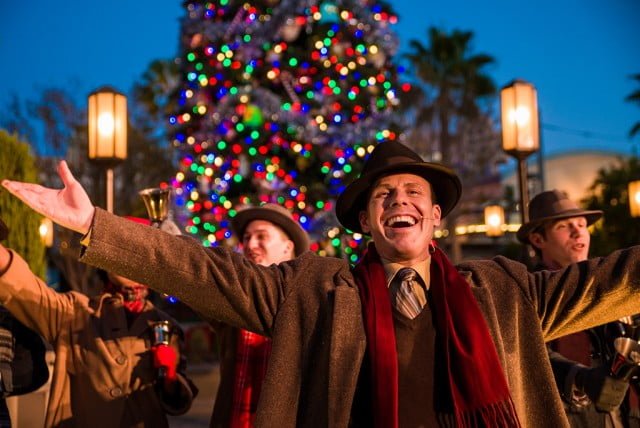 Early in 2013, we booked a trip to Walt Disney World for the first weekend in December. We had missed Reunion in 2012, and weren’t going to let it happen again. Even that early, airfare was somewhat pricey. Then, in June, I received an email alert from Airfarewatchdog (I plan on doing a post explaining how to leverage Airfarewatchdog alerts and ITA Software soon) with airfare from Indianapolis to Los Angeles for $110 round trip on numerous dates. I booked two trips that day, one in October and one in December, and planned on booking more later when I had time to consider other dates. It was clearly a price mistake, as airfare more than doubled in price a couple of hours later. The weekend I booked the December airfare was the same weekend as Reunion, so we had a dilemma. Since we hadn’t yet seen Cars Land or Buena Vista Street for Christmas, Disneyland won out. (Next year, Reunion!)

We only booked a weekend trip, leaving home early Saturday morning and returning on Monday, but it was well-worth the visit to see Disneyland Resort at Christmas. Our friend Guy picked us up from the airport. Guy is an interesting fella: he is well-versed in all things Disneyland, is a fan of wearing sunglasses when it’s not sunny out, is an enthusiast of Nike shoes and Captain EO, and has a dog that’s way cooler than him.

I had been checking the weather forecast prior to our trip, and it called for rain our first day. It rains around 11 days per year in Anaheim, so I was pretty excited. I know, “excitement” is not the normal reaction for rain, but it makes for some great photography, especially at Christmas when the reflections are especially great. Unfortunately, right after we checked into our hotel (the Ramada Maingate, which now replaces Desert Inn as our top pick along Harbour Boulevard) it stopped raining for the day. I guess that’s better than it raining on us for a few hours, and then stopping a couple of hours before night…

Sarah and I were both starving, so our first stop was somewhere to eat. We stopped at Cafe Orleans to see if they had any availability, and the wait was an hour. We then checked Blue Bayou, with similar results. Not wanting to wander aimlessly any longer, we opted to just do Hungry Bear Restaurant. This seems to be our default when we can’t think of anywhere else to eat, and while I like it, we eat there way too much. 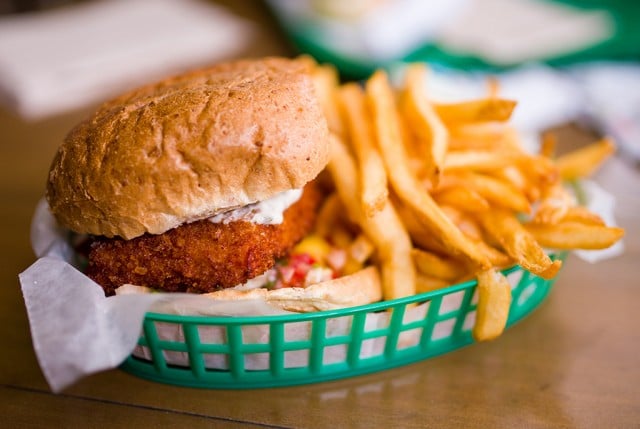 This fish sandwich is a special–I believe a hold-over from the Halloween menu. It was fairly good with a sizable chunk of fish, but nothing I’d seek out if you’re planning a visit. (That Sigma 35mm f/1.4 can make anything look great!) Hungry Bear normally does a great job with dessert, but I was disappointed to find no Christmas dessert and also that Trixie’s Pie (my favorite dessert there) had been removed from the menu.

Disneyland was pretty busy, but we figured ‘it’s a small world’ holiday might not have too long of a line, so we headed that way. The posted wait was 30 minutes, but everything we passed was longer, so we lined up. 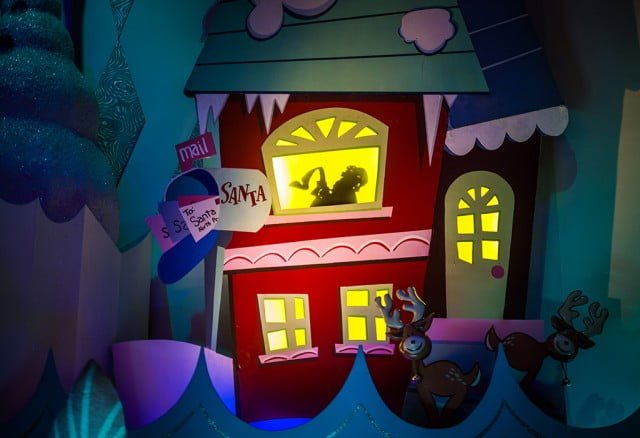 If you recall our Disneyland 2011 Christmas Trip Report, we were blown away by the holiday ‘it’s a small world’ overlay. Since then, we’ve seen the holiday overlays for it in Tokyo and Paris (Hong Kong and Florida don’t do the overlay), and our impression of it remains unchanged. It is definitely the best version of the overlay. There are simply more large-scale props and more substance overall. Plus, its scents really add something to the experience. 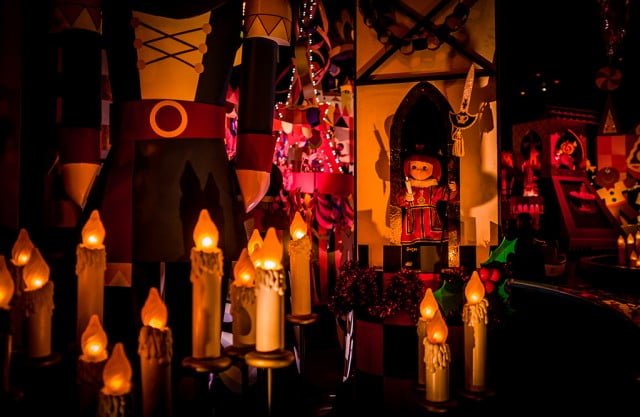 The United Kingdom scene is my favorite part of ‘it’s a small world’ holiday. I love all of the candles around the tree, and I love the evergreen scent. In fact, I swear I can smell the remnants of this scent when we ride at other times of the year, but I think it’s more likely just the scene triggering my memory…or something like that. 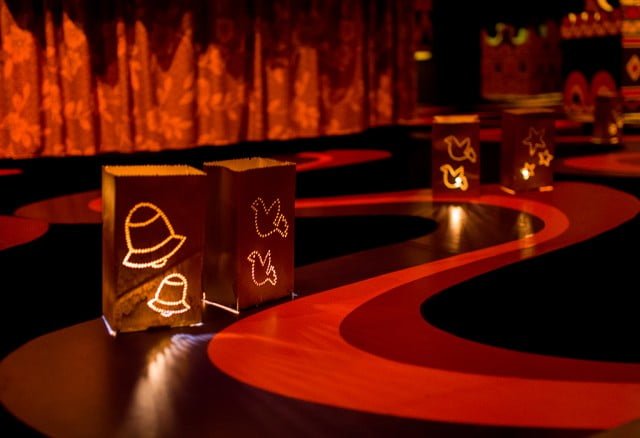 These bags are also a nice touch–I’ve been trying to get a particular shot of them for a while, and keep failing. Next time, I suppose. 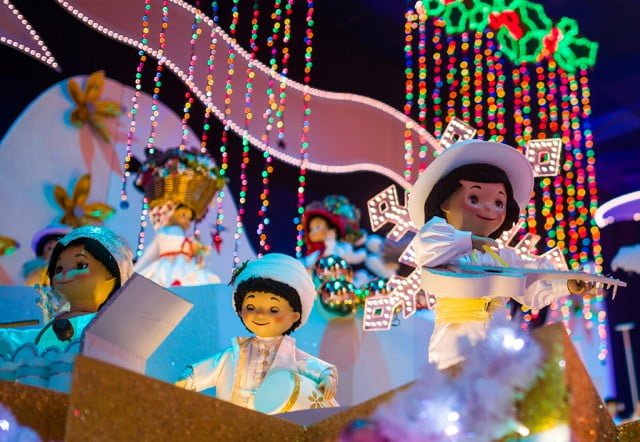 The finale room is a photographer’s paradise. Well lit and with lots of lights in the distance, it’s particularly “bokehlicious.” You’ll see what I mean when I post photos taken with my Nikon 70-200mm f/2.8 lens on our next ride-through. 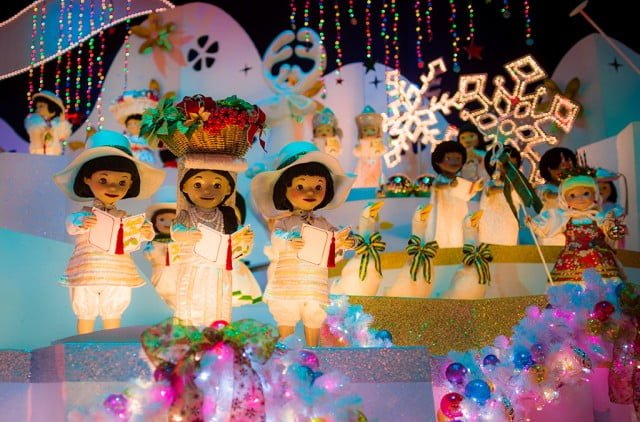 After ‘it’s a small world’ holiday, we did a quick spin on Buzz Lightyear’s Astro Blasters. Since this version requires actual skill (not just knowing where the ridiculously high point targets are located), we find ourselves playing it a lot to try besting one another. It’s an okay ride, but you’d think it’s amazing given how much we do it… 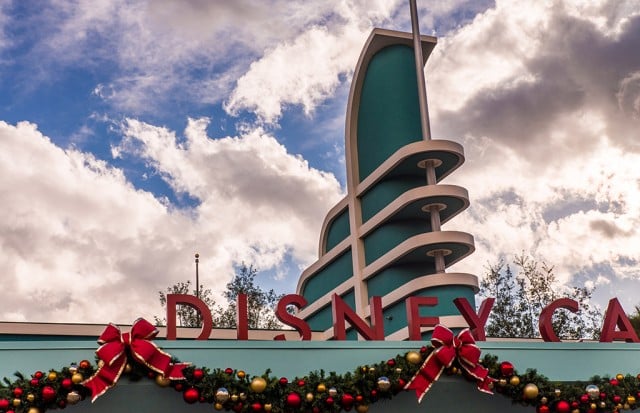 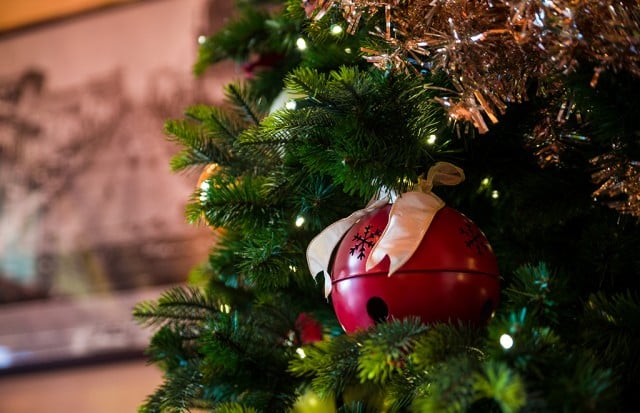 First stop was Clarabelle’s Hand-Scooped Ice Cream, where Sarah wanted to get some Christmas dessert she had seen on Instagram. 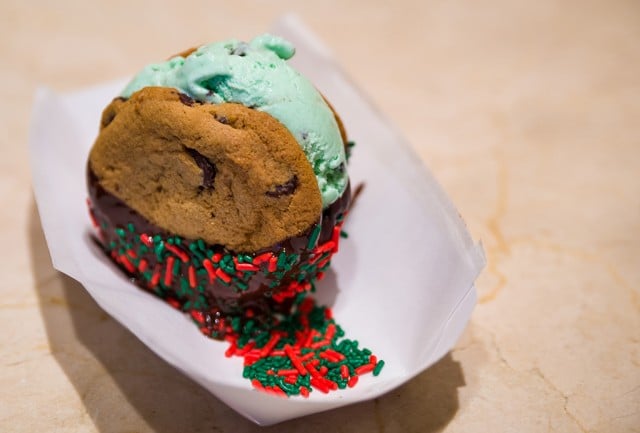 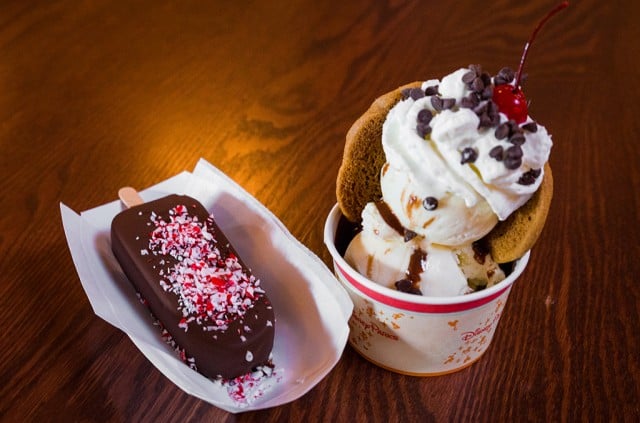 I got the Chocolate Chip Cookie Hot Fudge Sundae. It was okay. The cookies weren’t as fresh as I expected, and it was a bit too small to justify the $6+ price tag, I thought. 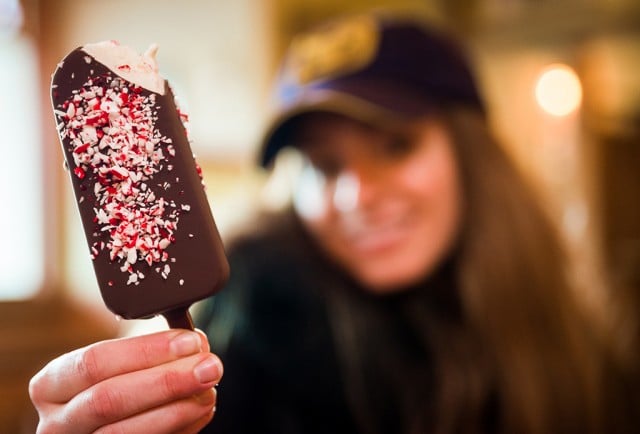 Sarah got the Hand-Dipped Chocolate Ice Cream Bar with Candy Cane Sprinkles. At $5, this was even more overpriced than my dessert, but the difference was that Sarah absolutely loved it. I guess that makes the price more justifiable. 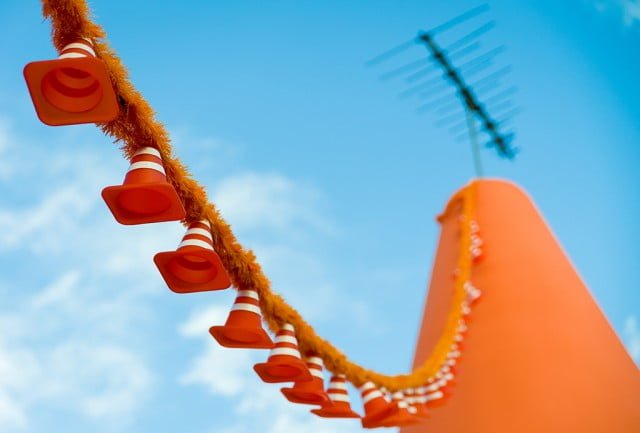 Next stop was Cars Land. We were really excited to see the numerous decorations custom-made for the land. 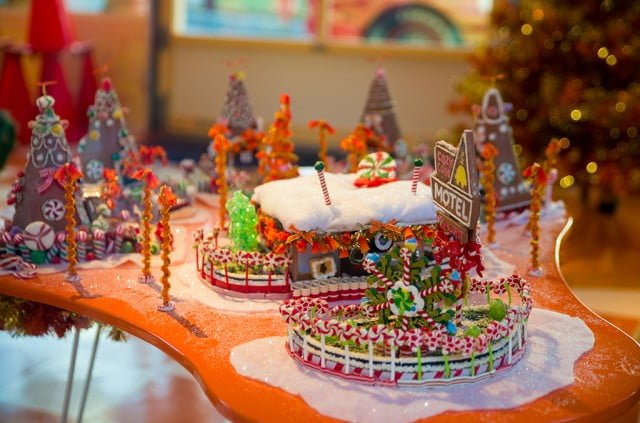 This gingerbread house of the Cozy Cone Motel is step up inside the lobby. It’s one of the coolest Christmas details in Cars Land, and while it’s not as large as the lobby displays in the Walt Disney World hotels, it’s also not as prominent. This is more like an Easter Egg for the minority of guests who decide to gaze inside the Cozy Cone lobby rather than something every guest will pass and stop to see. Given that, it’s quite impressive. 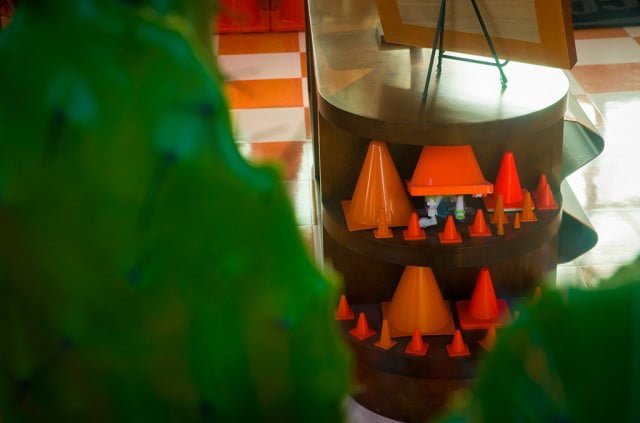 The Cozy Cone lobby is known for these fun little details. Here’s another popular one. We love gazing into the lobby’s windows to see what we can spot each trip. 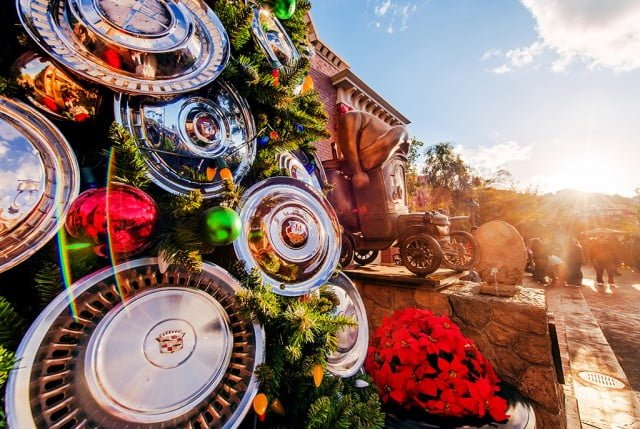 Moving on to the Cars Land Christmas tree, we get into the type of car decorations found throughout it for Christmas. These decorations have proven somewhat divisive for fans, with some people viewing them as tacky or over the top. I don’t agree with this assessment. Although I think that one of Cars Land’s normal strengths is doing car culture (and not just a cartoonish caricature of it) well, I think these are fun ‘visual puns’ that give the land a whimsical feel for Christmas. If they were up year-round, I might feel differently, but they aren’t. 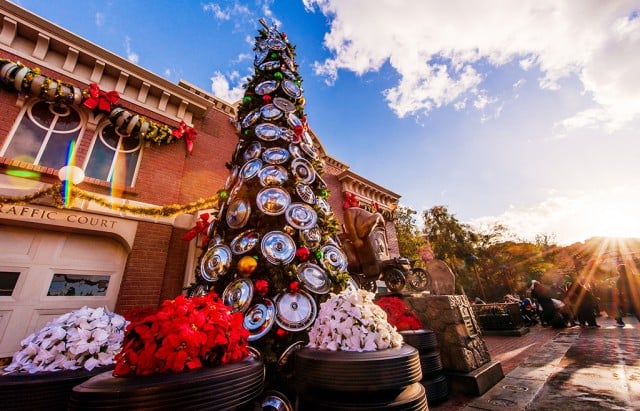 The Christmas tree and “Santa Stanley” look great. The only downside is that a PhotoPass photographer was staged here at all times during our visit, and I got the impression that these photographers thought they “owned” the spot. I quickly snuck in for this and other shots in between guests, but I could feel their eyes on me. PhotoPass is a great service, but I do not think they should be able to monopolize locations. 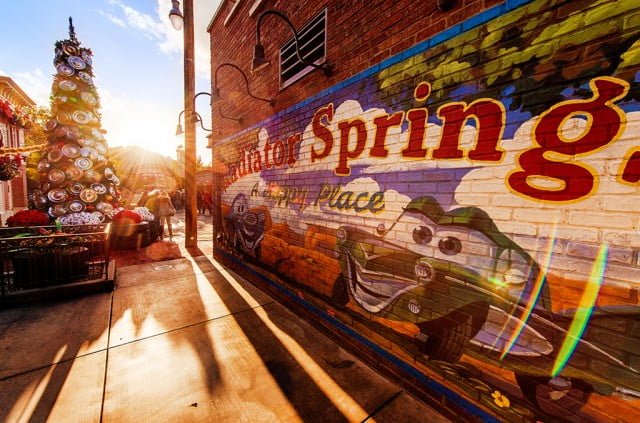 I think this alley makes for nice photos in the afternoon sunlight. I rarely see any other guests back here, so it’s also a nice quiet spot. As a photographer, I love the lack of people around this mural, but as a guest, I think some benches against it would a nice way to escape the crowds of Cars Land to relax in its ambiance. I’M SO CONFLICTED! 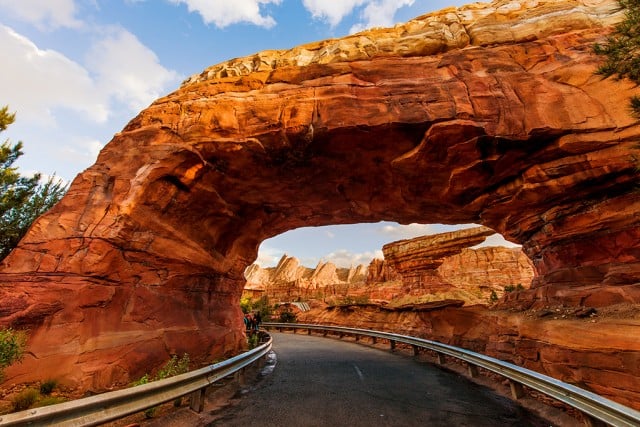 We exited Cars Land through my favorite entrance to it (if you’re going to Cars Land for the first time, you have to enter through Pacific Wharf!). 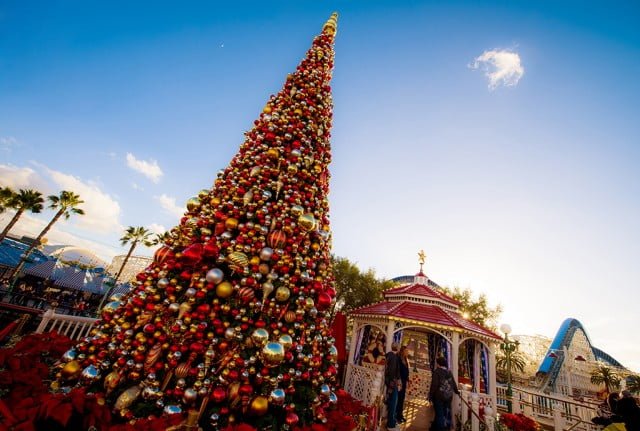 The ornament-heavy Paradise Pier tree is very pretty, but the Buena Vista Street and Cars Land Christmas trees both overshadow it now. That’s probably a good thing, as I didn’t think the Paradise Pier tree was large enough to pass as the park’s “main tree” on our 2011 visit. 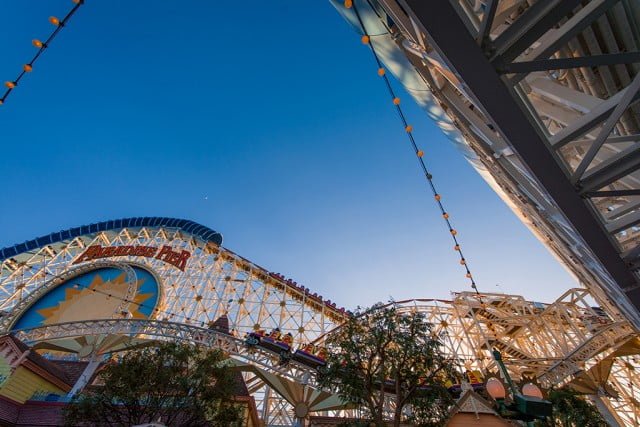 There was a short wait for California Screamin’, so Guy and I did that as Sarah walked around and snapped some photos with her phone. I love Cali Screamin’, not just as a coaster, but for the way it ties together Paradise Pier.

Next up was Silly Symphony Swings, which turned out to be a bit of a mistake given the cold weather. 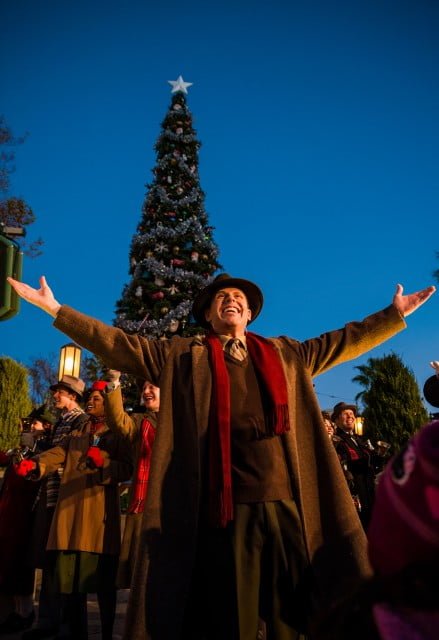 Guy told us that the Buena Vista Street Christmas tree lighting was worth seeing, so we headed over there to see it. There was no crowd for it until it started, so getting a front row spot for it is pretty easy if you show up 5 minutes early. The front is the outside part of the circle where the Christmas tree is located. Ask a Cast Member for the exact spot. 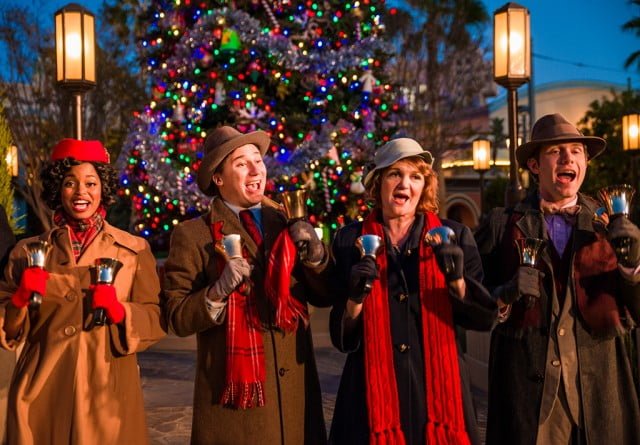 The excellent Buena Vista Street Community Bell Ringers participate in the Christmas tree lighting as do Mickey Mouse, Pluto, and other characters. The lighting ceremony is worth seeing for the Bell Ringers alone–this act is a GREAT touch for the holidays, and they have quite a loyal fan following. 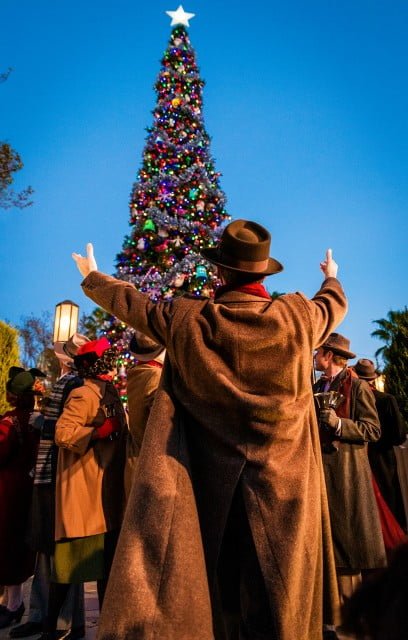 It’s a pretty cool moment when the Christmas tree is lit. In total, the lighting ceremony is only about 10 minutes, but it’s worth seeing. It doesn’t bill itself as a big draw or something huge. It’s just one of the little things that cumulatively make the parks special. The tree lighting that Epcot used to do was another of those special “little things.”

After this, we high-tailed it over to Viva Navidad in the Paradise Garden area of Paradise Pier. This ‘festival’ ended up being the big surprise (in a very good way) of Christmas at Disneyland Resort for us. Prepare yourself for some gushing over that in the next installment! We’ll also have plenty of night photos of Cars Land, World of Color – Winter Dreams, and Disneyland at Christmas. We know this is a pretty short installment, but with it being only a two-day trip, it’s going to be a short trip report!

If you’re planning your own trip during the Christmas season, you should check out our “Ultimate Disneyland Christmas Guide,” which will give you tips for visiting, right down to snacks to try and when to experience certain holiday offerings!

As for figuring out the rest of your Disneyland trip, including what to pack, whether you should stay off-site or on-site in a Disney hotel, where to dine, and a number of other things, check out our comprehensive Disneyland trip planning guide!

Have you seen Cars Land at Christmas? Do you like or dislike it? What about the other Disney California Adventure Christmas offerings? Hearing from you is half the fun, so if you have additional thoughts or any questions, please share them in the comments!