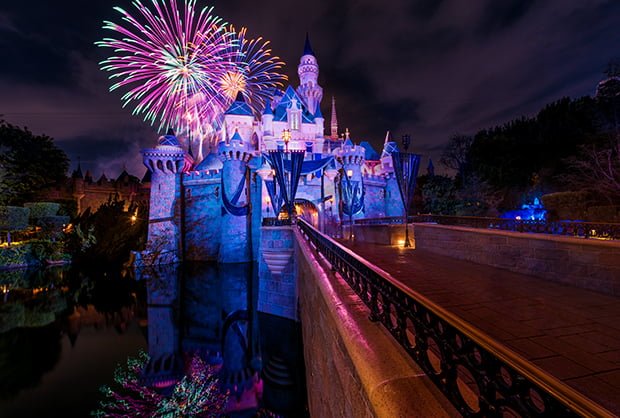 It’s been a while since we’ve shared a Disneyland and Disney California Adventure news & rumor round-up. In this post, we’ll do exactly that, with info and commentary about the potential Tomorrowland overhaul, Marvel/Super Hero Land coming to DCA, Pixar Pals Parking, and a ton of other recently announced entertainment changes for the summer and beyond.

We’ll start with the latest Disneyland and Disney California Adventure news, all of which has been officially announced. First, the Disneyland Forever fireworks will return for the summer. Starting June 7, 2019, the popular fireworks show that debuted during the 60th Anniversary Diamond Celebration will make its return.

Remember… Dreams Come True is my unequivocal favorite fireworks show I’ve ever seen at Disneyland. However, I like that they seem to be rotating through their lineup, revisiting fan favorites. So long as RDCT returns at some point in the future, I’m perfectly happy with other fireworks shows returning for encores.

We have yet to see the fruits of this project in person, but the latest photos circulating on social media make it look like a mixed bag. On the one hand, this was all absolutely necessary; the roof was badly damaged by the Diamond Celebration additions.

On the other hand, what has emerged thus far looks a bit on the vibrant side. Between all of the bright colors and the sparkles on top, it almost looks like an Instagram aesthetic, which is concerning. (My favorite paint and lighting scheme for Sleeping Beauty Castle was the understated look at Hong Kong Disneyland…which was also abandoned for something more aggressive.) 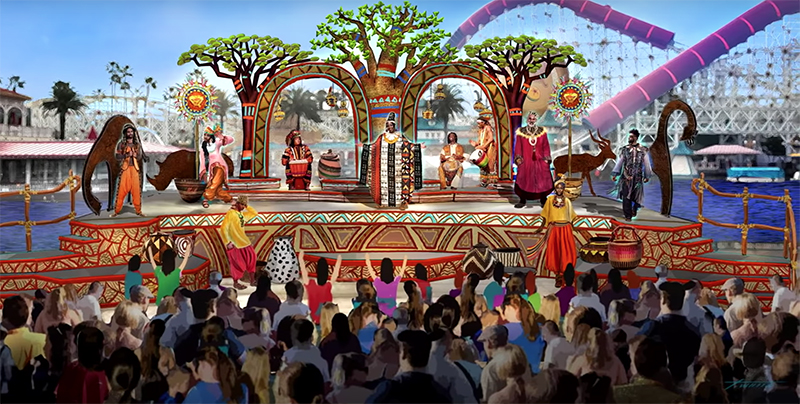 This summer, Disney California Adventure park will present an outdoor musical production entitled, “Tale of the Lion King.” The show features a cast of 18 actors, singers, dancers, and drummers who form an ensemble called the Storytellers of the Pride Lands.

As you can see from the concept art, this will be presented on the Palisades Stage in Paradise Park, which is the World of Color viewing area. Backdrops, props, and costumes inspired by the spirit of Africa are an odd juxtaposition against Pixar Pier in the distance, and an even odder fit for the California-themed park.

Nevertheless, we’re pretty forgiving of the thematic cohesiveness of temporary entertainment, and this is most likely a one-and-done for the summer. It’s probably being funded by the studio’s marketing budget for the “live action” Lion King remake, meaning it was this or nothing. With that in mind…I’ll take this. 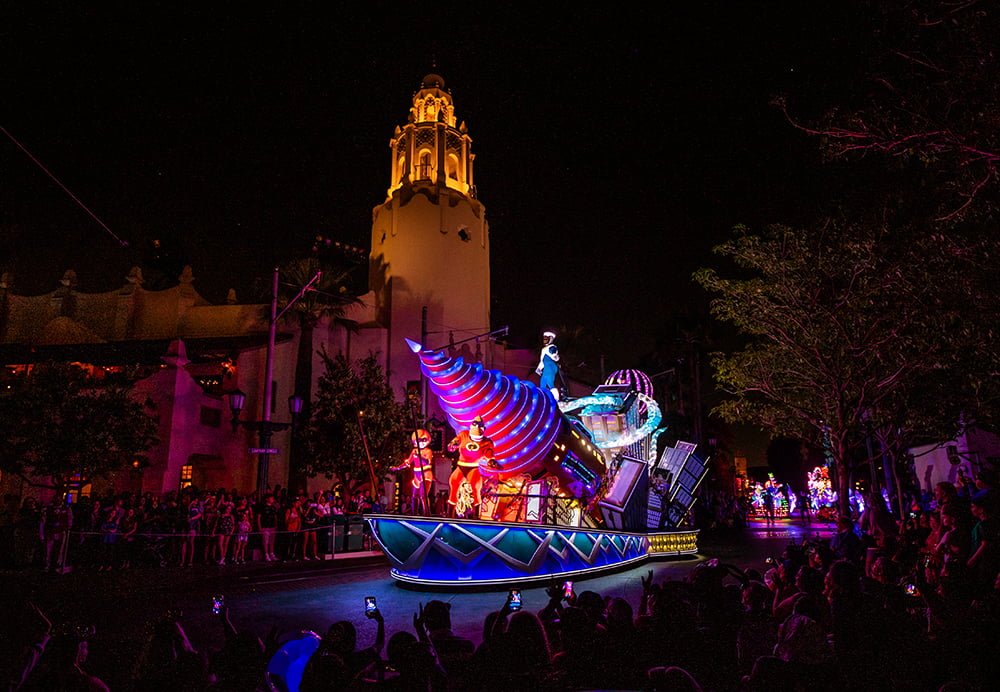 On another note, we’ve yet to hear anything about Paint the Night returning to Disney California Adventure this summer, which is a bit surprising. We assumed it was a foregone conclusion that the parade (which is still backstage in California) would return for a summer run.

Offering as much Star Wars counter-programming as possible to draw guests to DCA and away from Disneyland certainly makes sense. Maybe it’s assumed that World of Color will be enough? Maybe a Paint the Night announcement is still on the horizon? We shall see. 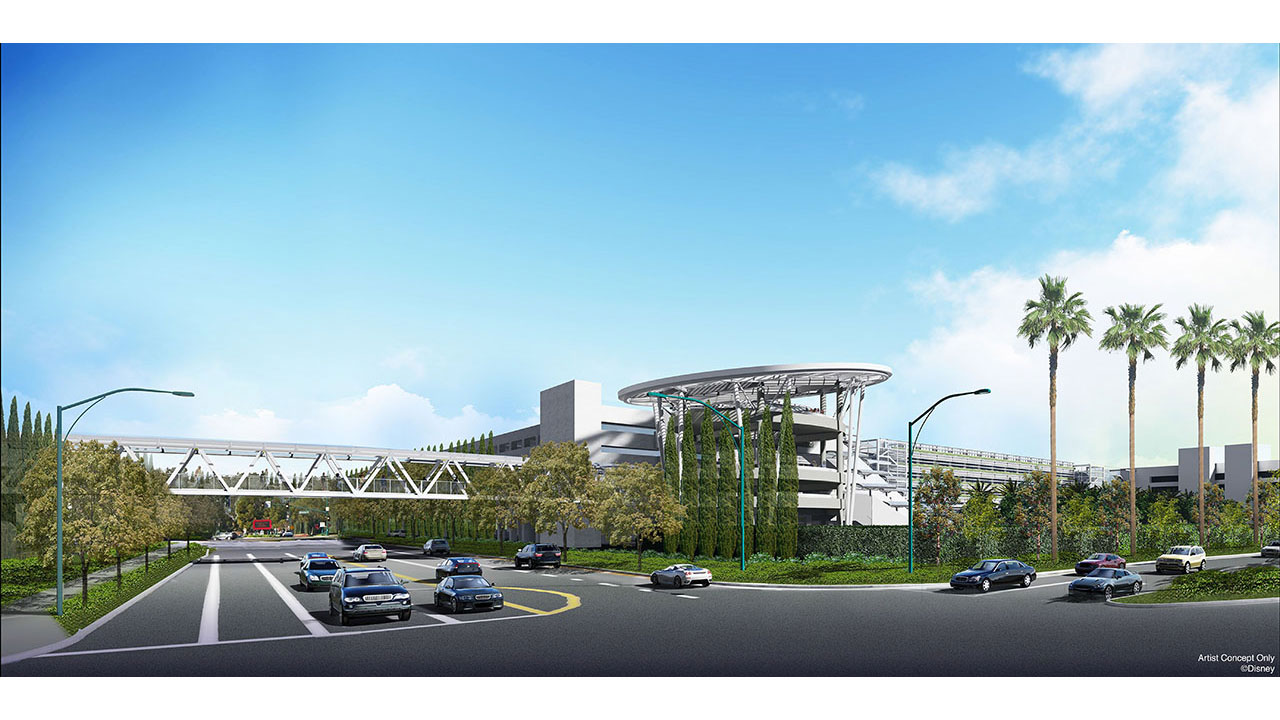 In other “exciting” news, work races to finish the Pixar Pals Parking Structure by the July 2019 deadline that was previously announced. Work is beginning to wrap up on the structure itself, with signage being installed on each level and brickwork being laid outside the structure. Given the recent pace of construction, we’re assuming the new target opening date is June 24, 2019.

One of the final pieces of the puzzle is the pedestrian bridge (pictured in the above concept art) that will connect from the parking structure—over Magic Way—to the rest of the resort, allowing guests the option to walk through Downtown Disney to the Esplanade instead of taking the tram. This will ease foot traffic congestion at Disneyland Drive and Magic Way, which has been bad in recent years and only will get worse once Star Wars: Galaxy’s Edge opens and more people are parking back here. 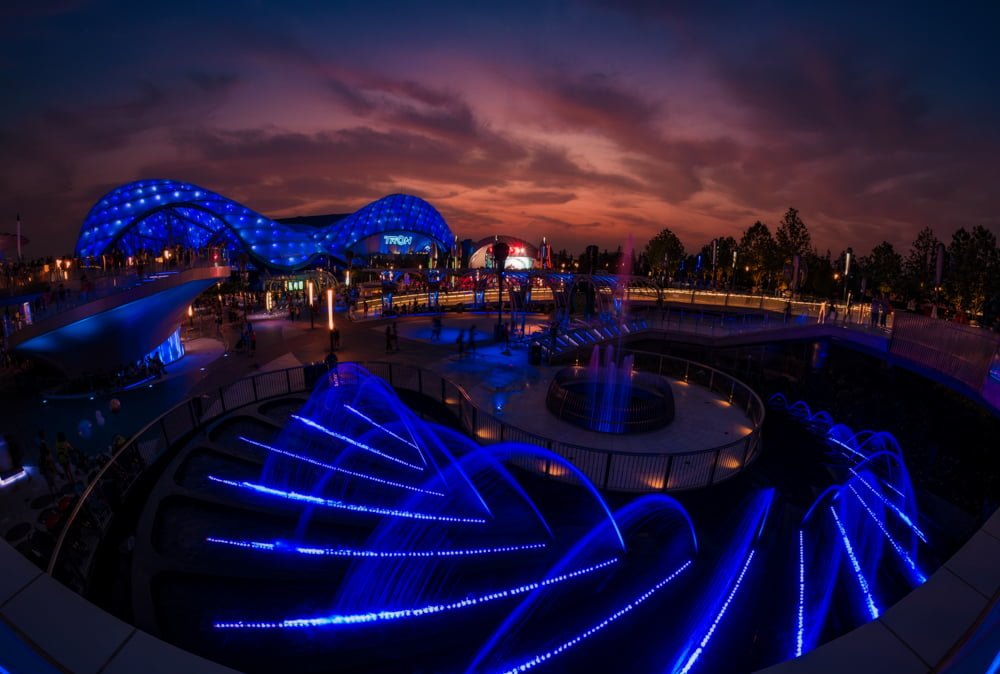 Next, there are rumors swirling about the future of Tomorrowland. To our knowledge, none of these have any basis in reality, save for the general notion that an overhaul of Disneyland’s Tomorrowland is planned at some point in the future. However, we do not expect that to entail TRON Lightcycle Power Run at the entrance to the land (it wouldn’t even fit there) nor any cloned attractions from Hong Kong Disneyland.

We have heard very little credible info about Tomorrowland recently, and our speculation as to why that’s the case is because the plans are still fluid and nothing has been greenlit. A comprehensive Tomorrowland overhaul being announced at this summer’s D23 Expo would not surprise us, but we don’t expect it. There are other, higher priority projects slated for both parks at Disneyland Resort.

Next, OutsideEars (a Disneyland Paris news source) has posted blueprints for the layout of the Spider-Man ride coming to both Walt Disney Studios Park in France and Disney California Adventure. They’ve also posted exterior renderings showing a New York industrial warehouse style, which is unique to Disneyland Paris.

As we previously reported in our “Rumor: Marvel Land California Campus w/ 3D Ride & Microbrewery” post last year, the DCA version will be set on an Avengers campus set in real-world Southern California. It will be a place where Marvel super heroes can share their technology and methods of helping the world with the public.

Phase one of the Disney California Adventure super hero expansion will contain a microbrewery/counter service restaurant, merchandise shop, a small quad space with various avenues, and an interactive 3D dark ride that will be an expansion of the existing ‘It’s Tough to Be a Bug’ theater. That last item is the subject of these blueprints–the Spider-Man shooter attraction, which vaguely resembles Toy Story Mania.

This comes as little surprise. As we speculated in our Marvel Land rumor post (which has other details about this project, all of which remain accurate to the best of my knowledge), the Spider-Man ride will likely be a screen-heavy dark ride judging by the limited space of the show building, and the desire to shoe-horn it into that space.

As with the Hong Kong Disneyland incarnation of Marvel/Super Hero Land, the Disney California Adventure incarnation of the expansion is backloaded. What opens first is not going to be the marquee draw, and is probably going to be anti-climactic after the highly-themed Star Wars: Galaxy’s Edge opening the year before it. Phase 2 of this land is still several years away, and is slated to contain the bigger-budget elements of the land.

My biggest worry isn’t that the Spider-Man ride will be underwhelming, as my expectations have been tempered for the first attraction for a while. (Although I do think it’s ill-advised for Disney’s first domestic Marvel attraction to be an unambitious one based upon this particular character; Universal’s Amazing Adventures of Spider-Man is one of the best theme park attractions in the world, and the direct comparisons here are unlikely to be favorable towards Disney.)

Rather, my concern is that the place-making of the ‘campus’ will resemble an office park in Irvine with red and blue paint and cool lighting, instead of having a design that’s immersive and engaging. Star Wars: Galaxy’s Edge is going to set a high bar, and while not everything can or should be on that level, Marvel–which is quickly becoming the world’s biggest franchise–does deserve to be on that level. Whatever style is chosen for this land now will likely be carried through to Phase 2; here’s hoping it’s more than a boxy and industrial setting.

What do you think of the Avengers Southern California Campus and Spider-Man ride? What about other entertainment changes in the California parks? Do you expect an announcement on the Tomorrowland overhaul at the D23 Expo? Anything on your wish list for that project? Any questions? Hearing your feedback is both interesting to us and helpful to other readers, so please share your thoughts or questions below in the comments!