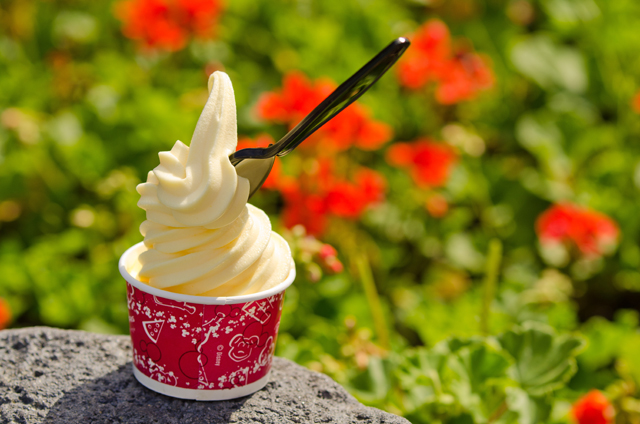 If you’re a Disneyland or Walt Disney World regular, you already know that a Dole Whip is a non-dairy, soft serve, frozen work of art. You can order it as a Pineapple Float or as in a cup. Officially, only the cup-version is called a Dole Whip by Disney, but my unofficial poll of fans has revealed that most people prefer the Pineapple Float, and refer to that as a Dole Whip or Dole Whip Float.

If you aren’t a regular, or are just unfamiliar with Dole Whips for whatever reason, welcome to your new single-greatest resource on the internet, as this page will familiarize you with the mystique, lore, and history of this venerable treat.

The Dole Whip is easily the most popular Walt Disney World and Disneyland snack among big Disney fans, even moreso than the churro, as it has a cult-like following (the good kind of cult–one that I’m dubbing the “Dole Whip Devotees”). The only snack that even begins to rival the Dole Whip’s following is the Citrus Swirl at Sunshine Tree Terrace, which is also served in Adventureland in Walt Disney World’s Magic Kingdom. The Dole Whip is so popular that there’s even a podcast named after it. Heck, do a Google search for “Dole Whip” and look at all of the results, many of which are pages by Disney fans discussing the greatness of this delightful food that has attained celebrity status. That’s all pretty impressive for a simple cup of soft serve ice cream, you might think.

Don’t go calling it a “simple cup of soft serve ice cream” until you’ve tried it. It may seem simple, but it’s pure magic. Here are some fun facts and info about the Dole Whip…

So where can you go to acquire your own dose of magic? The location of this magical concoction is shrouded in secrecy. You won’t find any references to Dole Whips on the Tip Boards, nor can you call Disney Dining to get a reservation for the “Dole Whip Restaurant.” Also, despite my lobbying, there still aren’t directional signs in the parks leading to the promised land of Dole Whips.

So where do you go if you want a Dole Whip? If Disneyland, you need to head to the Enchanted Tiki Room in Adventureland, where the Tiki Juice Bar stand with wait times that often rival attractions dispenses the tasty treats. If you’re in Walt Disney World, you will want to head to Aloha Isle in Adventureland (yes, as you may have gathered, Dole Whips are very adventurous!) or Captain Cook’s at Disney’s Polynesian Resort.

Note that in March 2015, Aloha Isle and the aforementioned Sunshine Tree Terrace are swapping locations. The reason is unclear at this point, but two possible reasons are crowd control (lines for Aloha Isle frequently extend into the walkway, whereas Sunshine Tree Terrace isn’t in as busy of a walking area) and due to other reconfigurations in Magic Kingdom dining. Liberty Tree Tavern is going down for a Summer 2015 refurbishment and there’s a new restaurant being built in the Adventureland Veranda, which may impact the Aloha Isle location. 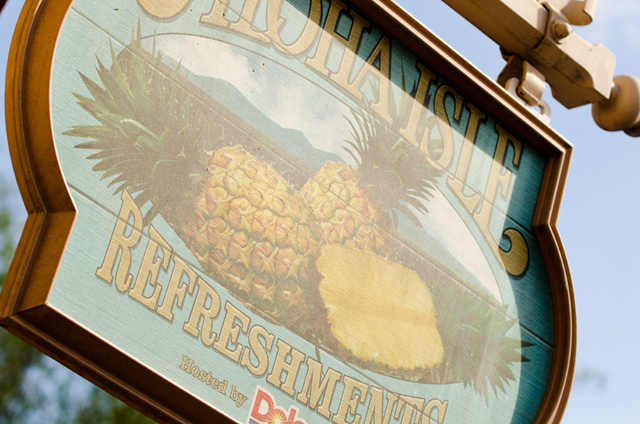 Much like a dangerous narcotic, Dole Whips are incredibly addictive. If you try it once, chances are you’ll be hooked. In terms of healthy living, this isn’t a problem, as Dole Whips only have 80 calories (and certainly none of that other bad stuff like sugar or fat…right…? ;)).

However, the addictive quality of the treat poses a problem when you return home, as Dole Whips aren’t available in most locations (despite my pleading, our local Wendy’s still hasn’t switched out the Frosty mix for some Dole Whip mix!). That is, unless you live in Hawaii, where you can go to the Dole Plantation and order a Dole Whip or any number of pineapple creations. This was where I first experienced the Dole Whip, back when I was but a wee lad. I don’t really recall that Dole Whip, but some people claim that they’re better in Hawaii because they’re “more fresh.” 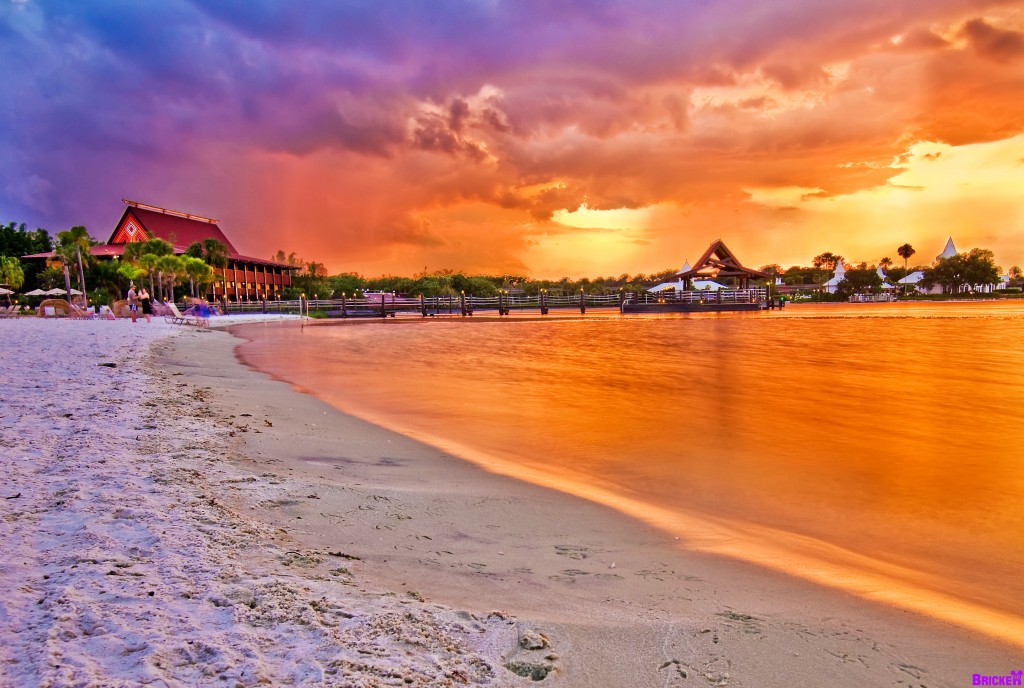 This claim is suspect, as Dole Whips are made of a mix of these ingredients (you might not want to read that), not fresh pineapple. If you live somewhere that isn’t Hawaii, you’re out of luck. That is, unless you have a soft serve ice cream machine and order the mix yourself from Unified Enterprises. That’s right, the Dole Whip isn’t actually a uniquely Disney treat. The Dole Whip actually is sold elsewhere outside Walt Disney World, Disneyland, and the Dole Plantation, including at other regional amusement parks and restaurants, but the idea of it being sold at some local hole-in-the-wall drive-in restaurant sort of ruins the allure for me…so let’s try to not think about that! 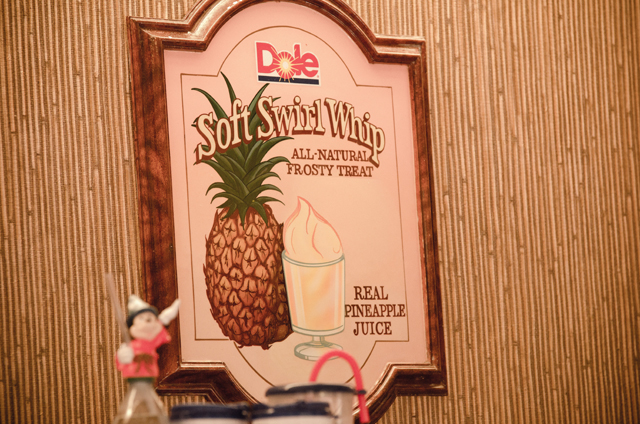 Since Sarah and I started visiting Walt Disney World together as adults, my fascination with the Dole Whip has been kindled (as you can see by the poor-quality photos below, my love for Dole Whips actually predates my interest in photography). I’ve had Dole Whips for breakfast, lunch, and dinner—and even at 1 am—and I can safely say that they’re the perfect food for any time of day! 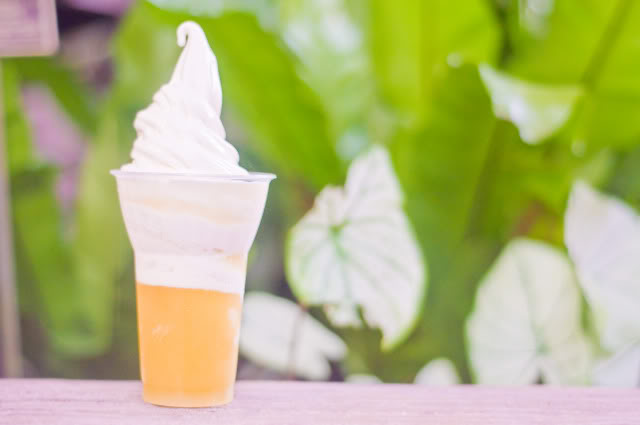 The actual history of the Dole Whip predates my experiences with it, though. It has been sold at Disneyland and Walt Disney World for at least 15 years, although I don’t have a precise year that Aloha Isle or Tiki Juice Bar began serving it (if you do, please leave a comment!). It has not been served since either Walt Disney World or Disneyland opened, and appears to be a product of the 1990s based on my research.

I know I promised “lore” and “history” of the Dole Whip at the outset of this article. Unfortunately, that’s the extent of my Dole Whip history. As for lore, well…I’ve heard that the Dole Whip is a fountain of youth, of sorts. If you consume 3 per day, you will never grow old. 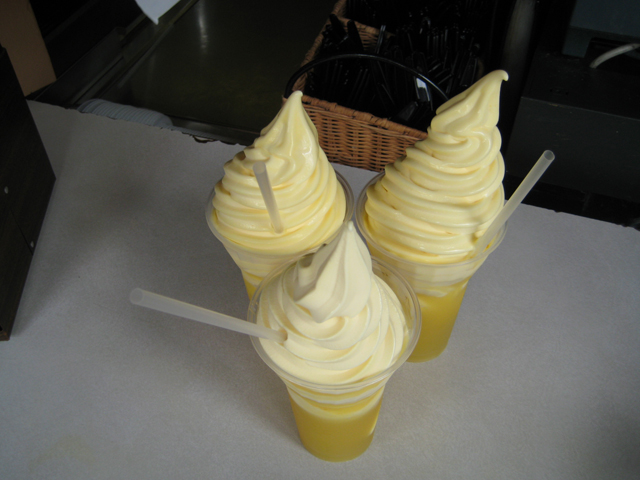 I can neither confirm nor deny the accuracy of that lore, but if you have the opportunity to eat three Dole Whips per day, I highly recommend doing it. Not because the lore might be true, but because Dole Whips are that delicious!

Are you a Dole Whip Devotee, or do you not quite get the hype surrounding the Dole Whip? Join the “cult” by sharing your love or other thoughts in the comments!