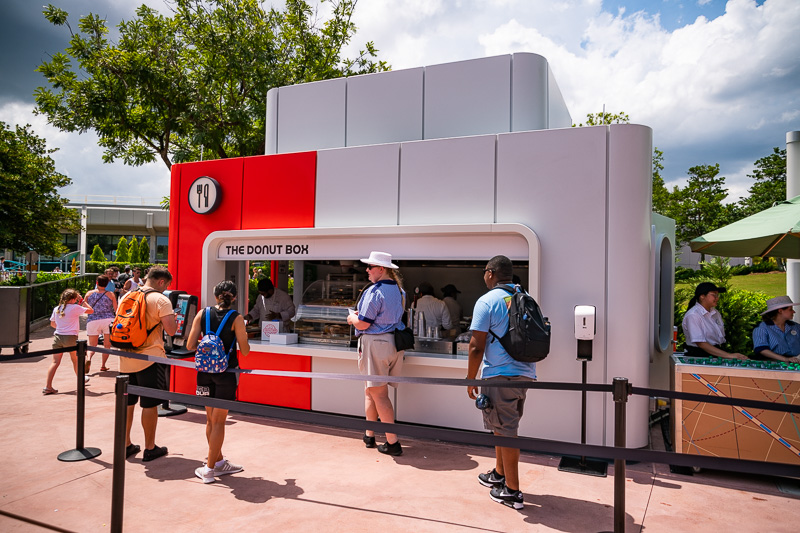 The Donut Box is a booth in Future World during the 2021 Epcot International Food & Wine Festival at Walt Disney World. In this Global Marketplace review, we’ll look at the menu prices, share food photos, and offer thoughts on what is–and is not–worth your money.

Pictured above, the Donut Box is located in Future World East, adjacent to Cool Wash and the Epcot Experience. If you take a hard right at the Test Track sign, you’ll pass it. This red little kiosk is a semi-permanent fixture of Future World, with a similar blue one opening as a popcorn stand later this summer or fall.

The location has gone through several concepts, but has been the Donut Box during past Epcot Food & Wine Festivals, and I think it had another name at some point, but I don’t recall. Prior to that, the Taste Track food truck was in this same general location. Most recently, this location was home to exceptional Epcot Sunshine Griddle for the last several months. Unfortunately, the Donut Box is a significant downgrade from that.

Here’s the food menu for the Donut Box Global Marketplace: 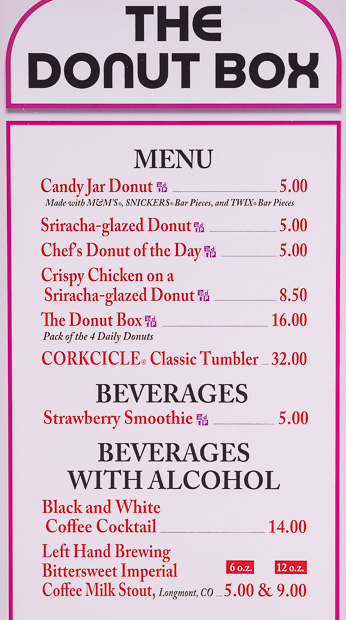 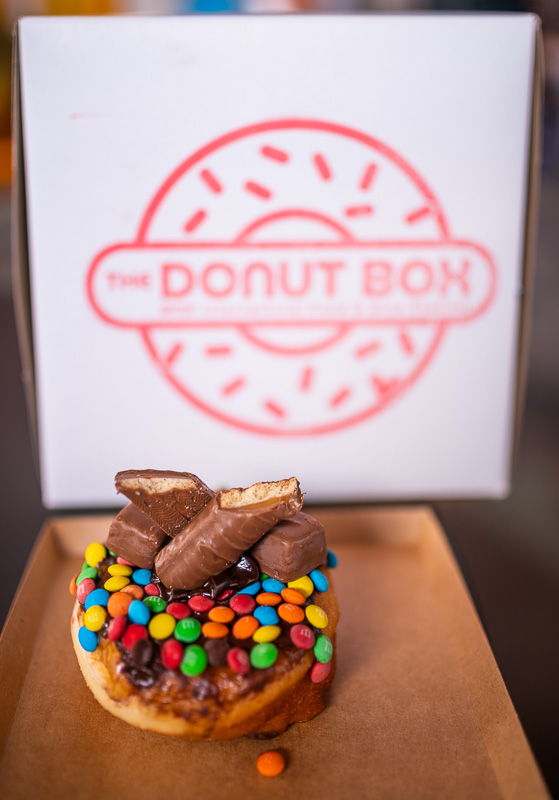 Candy Jar Donut made with M&M’S, SNICKERS, and TWIX ($5) – This one comes piled high with candy and, unfortunately, that is still not enough to mask the flavor of a subpar doughnut.

Under that mountain of toppings is a dense, dry, and underwhelming doughnut. It is filling, though. 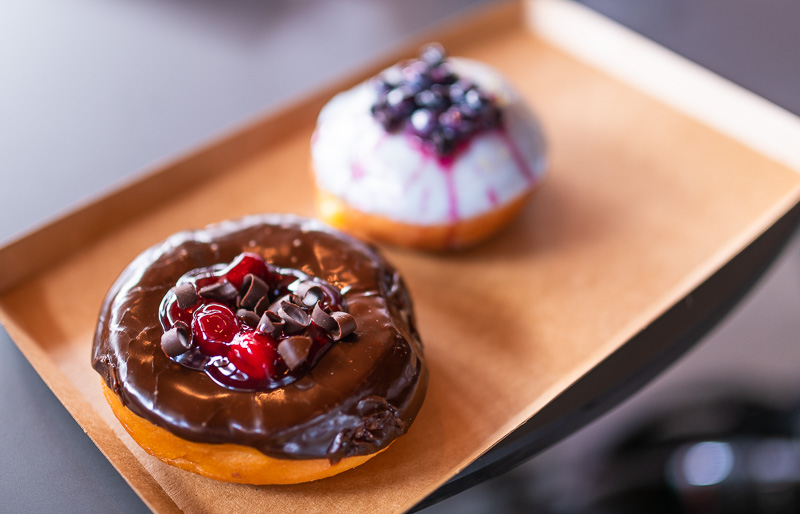 This one does a little better in terms of dryness thanks to the cherry, but it’s still not something we’d recommend ordering. 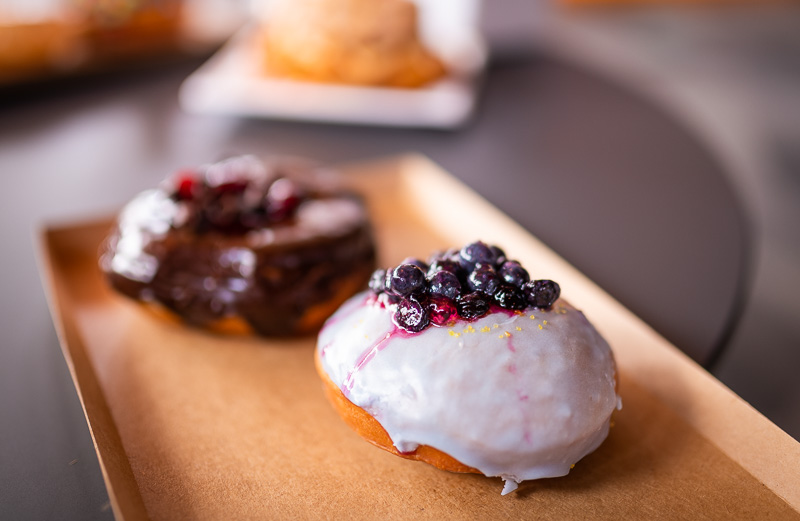 Lemon Blueberry Chef’s Special Donut of the Day ($5) – If you want one of these doughnuts for some odd reason, the Lemon Blueberry one is the best of the bunch.

The secret to its “success” is simply being filled with lemon custard, which does an admirable job of balancing out the dry and otherwise lacking doughnut. It’s still not good by any stretch, but it’s marginally better than the rest. 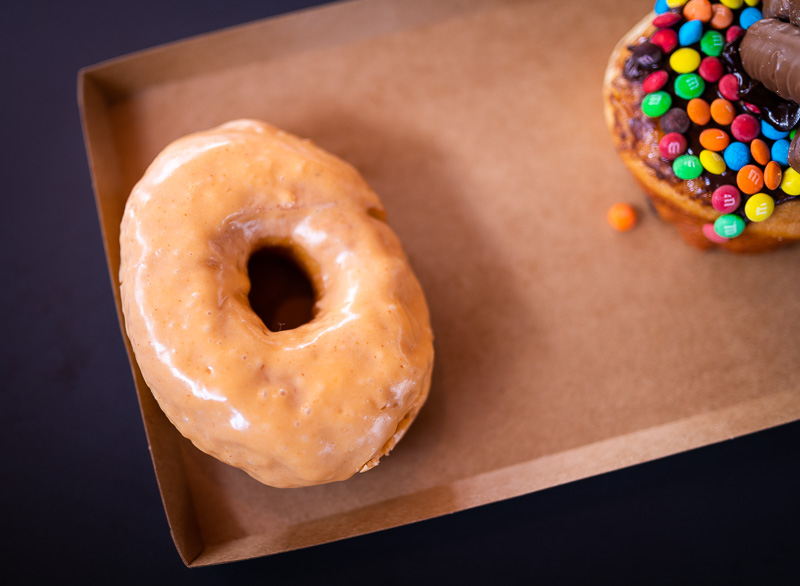 Sriracha-glazed Donut ($5) – Is this a thing? Are sriracha doughnuts part of some new foodie trend? If so, why? Can someone stop it?!

Sometimes, odd combinations are unexpectedly delightful. Flavor pairings that inexplicably work and push the envelope of culinary creativity. Other times, they’re abominations born out of a lack of good ideas, with the expectation that shock value content for social media will fuel sales. This is the latter.

For lack of a better description, this is like a Creamsicle-meets-sriracha flavored doughnut. It’s probably not quite as awful as that sounds (and the dry and underwhelming base certainly does it no favors), but the sweet and savory combo just does not work here. 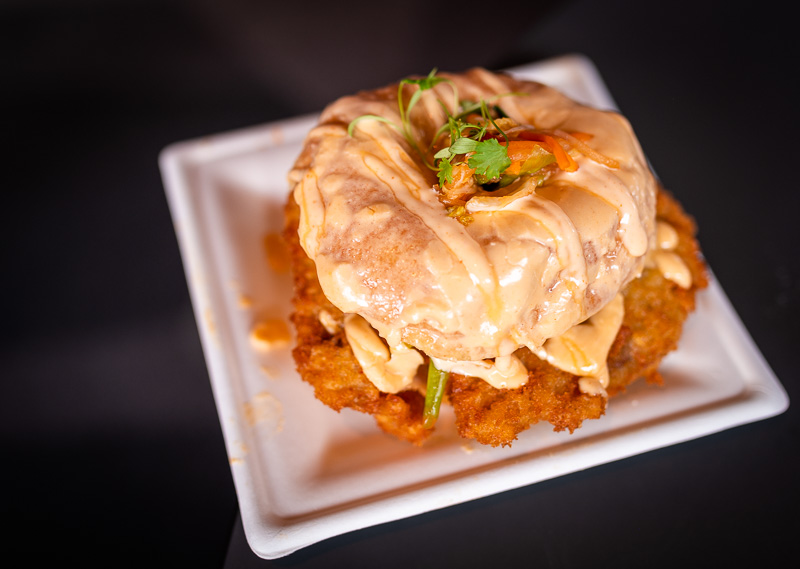 Crispy Chicken on a Sriracha-glazed Donut ($8.50) – It’s as if the chefs behind the Donut Box somehow heard our complaints about the doughnuts being dry, and addressed that–by adding a ton of sriracha sauce to this sandwich.

But, instead of putting it on the inside, they opted to flip the script and put the sauce on top of the sandwich. Wow, what an innovation!!! 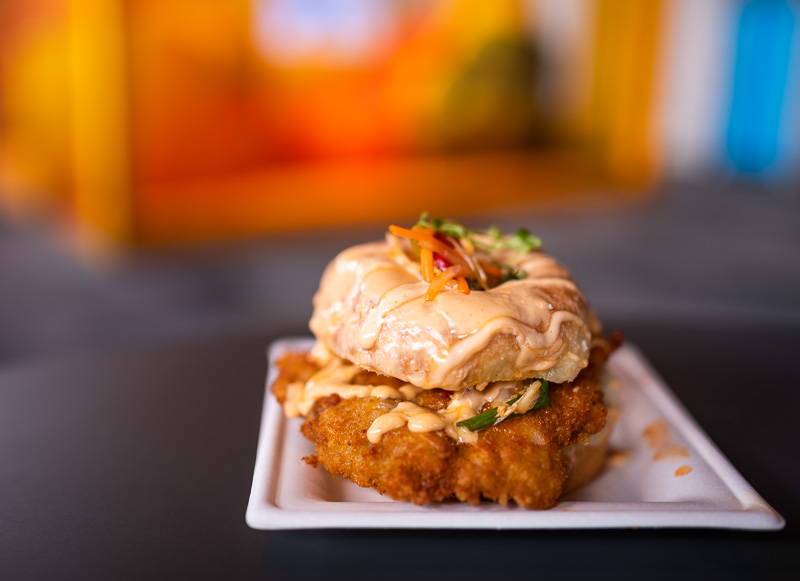 If I sound a little annoyed by this one, it’s because I am. It’s like this was created not as a food for humans to consume, but as a novelty for Instagram photos. I could only eat half of this before getting frustrated, giving up, and immediately going to the restroom to wash my hands.

I wanted to like this, I really did. The burger is the one thing I genuinely loved at Everglazed in Disney Springs. The sweetness of the doughnut melded beautifully with the patties and toppings and coalesced in one fantastic burger. It was messy, but not in a nonsensical way; it was delicious and the payoff was worth it.

By contrast, this chicken and sriracha sandwich is a frustrating mess, and the flavors don’t come together in any kind of harmony to make the headaches worth it. Even if the sauce were put on the inside of the sandwich where it belongs, this would still be a hard pass. That’s unfortunate, as the concept is a good one–the execution is what’s terrible. 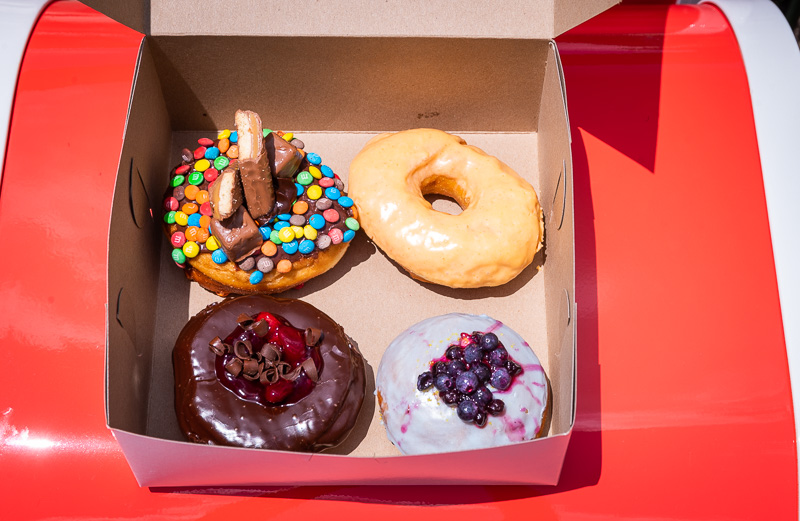 The Donut Box: Pack of the 4 Daily Donuts ($16) – We bought the 4-pack, which includes every doughnut on the menu except the chicken sandwich. This means the two ‘static’ options–Candy Bar Donut and Sriracha-glazed Donut–plus the two daily chef picks.

The 4-pack ends up being $4 less expensive than purchasing these individually. “It’s cheaper” is about the best thing we can say about this box. If you’re in the market for more of a bad thing, it’s a great option. 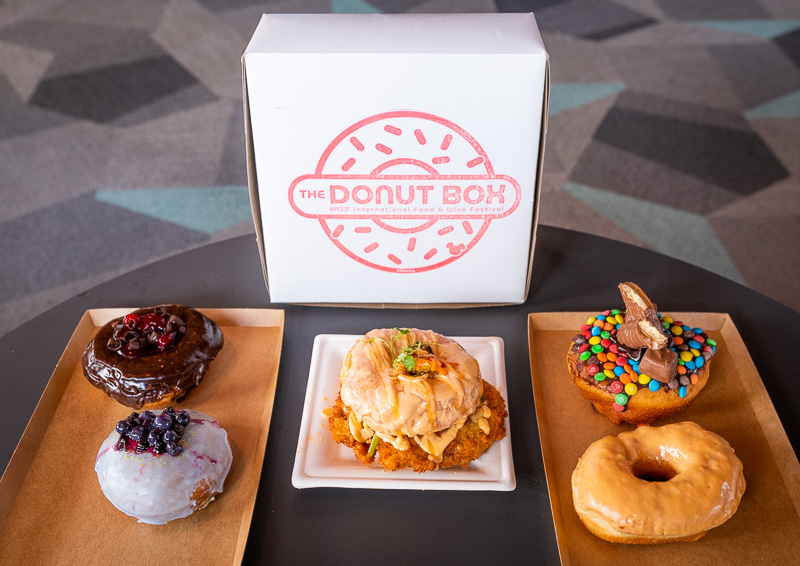 Ultimately, the Donut Box is entirely skippable. Even if your party is made up exclusively of picky eaters, there are much better options all around Epcot. Most desserts at the 2021 Epcot Food & Wine Festival are cheaper than these doughnuts, and they’re all better. Same goes for almost all desserts at counter service restaurants around the park.

These doughnuts are just not good; they’re low quality and overpriced. The chicken sandwich could’ve been a tasty novelty, but instead, it’s only a novelty–a semi-edible Instagram prop. It’s almost hard to believe this location transformed from the ambitious and excellent Epcot Sunshine Griddle to this. It’s easily the biggest downgrade of any festival location from Flower & Garden to Food & Wine.

If you’ve tried any of the flavors at the Donut Box booth, what did you think? If you’ve tried the Crispy Chicken on a Sriracha-glazed Donut, do you agree or disagree with our take? Did you have better or worse luck than us with what you ordered? Have you tried any of the drinks at this Global Marketplace? What was or was not worth the money? Do you agree or disagree with our food reviews? Questions we can help you answer? Hearing your feedback—even when you disagree with us—is both interesting to us and helpful to other readers, so please share your thoughts below in the comments!