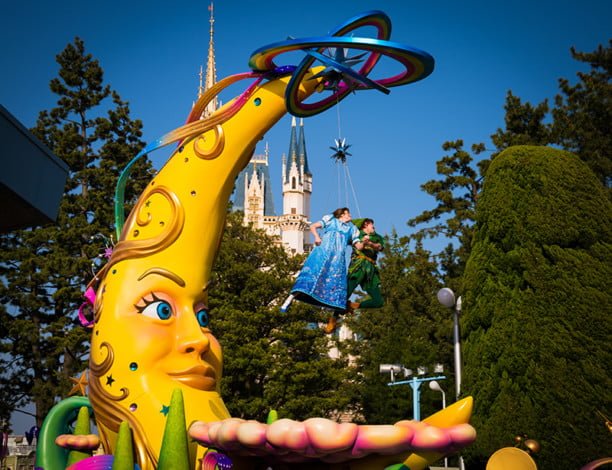 Dreaming Up is the new daytime parade at Tokyo Disneyland for the park’s 35th Anniversary. We anticipate the parade continuing its run following that, likely until April 2023. In this post, we’ll review Dreaming Up, share some photos, and offer viewing tips.

The big question for many Tokyo Disneyland fans will be whether Dreaming Up is better than Happiness is Here. I’m still not sure. I doubt I will ever be sure. Happiness is Here was the first Tokyo Disneyland parade we experienced, as it debuted shortly before our first visit back for the 30th Anniversary. We’ve watched it more than any other daytime parade anywhere, and we have a lot of sentimentality and nostalgia for it.

Although we try to set aside nostalgia and view things to the most objective extent possible, it’s impossible to separate it out completely. In light of that, our review will focus heavily on how it compares to Happiness is Here. The good news is that, at worst, Dreaming Up is the second-best daytime parade we’ve ever seen. (With Festival of Fantasy and Soundsational rounding out our top 4.)

Before we get to the review, let’s quickly talk viewing tips. The first one would be to arrive to your viewing spot at least 45 minutes in advance if having a close-up view is important to you. This still will not guarantee you a front-row spot, which will definitely require grabbing a spot over an hour (more like 2 hours right now) in advance.

Japan takes its entertainment seriously, and many guests will camp out for over an hour for parades, and this is doubly true while Dreaming Up is still new. Although we’ve seen Dreaming Up several times, we still haven’t had a front row spot because we weren’t willing to wait over 2 hours for one of those spots.

The good news is that the first several rows of viewing all require guests to be seated, so it’s not like other parks where a second or third row spot means only fleeting glimpses of the parade. The bad news is that much of Dreaming Up’s beauty is in the costume design of street-level ‘mover’ performers, and your view of some of those will be slightly obstructed from the third or fourth row. 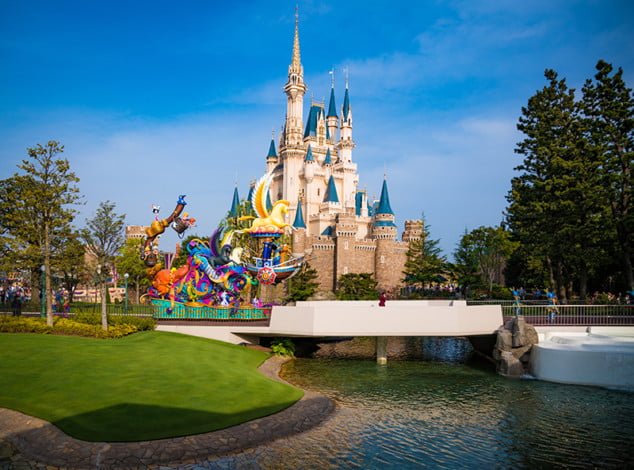 If having a close-up view of Dreaming Up is not important, one recommendation we have is watching from the terrace at Tomorrowland Terrace while having lunch or an afternoon snack. Please note that this absolutely does not mean getting food from Tomorrowland Terrace. Get something at one of the other nearby restaurants–Tomorrowland Terrace is the worst food at Tokyo Disneyland, and you should not eat there under any circumstances.

Our next recommendations pertain to photography. First, the standing area around the Partners statue is a prime area for photographers (it’s my go-to spot for parades) and will provide a shots with Cinderella Castle in the background. You’ll sacrifice photos of low-level performers here, but it’s a worthwhile tradeoff, I think. 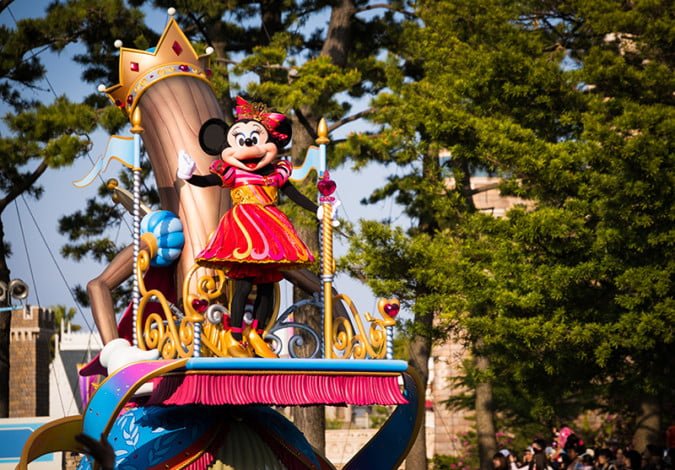 Second, the late afternoon parade is always better in terms of lighting. The sun is low on the horizon and will be casting a beautiful golden glow on the floats and performers, especially by this Partners spot. The flip side to this is that viewing areas where the sun is in your eyes will be a challenge due to shadows.

Finally, if you’re going for a spot that doesn’t have a castle view, I’d recommend finding a spot where the floats approach head-on. This gives you a chance to photograph the parades while approaching, plus as they pass you. I like these spots because they allow me to use my Nikon 70-200mm f/2.8 lens throughout the parade, capturing wider shots of the floats when they’re in the distance, and performer close-ups as they draw nearer. (Unfortunately, my 70-200 was in for repairs this trip, which is my ‘excuse’ as to why so many of these photos are dull.) 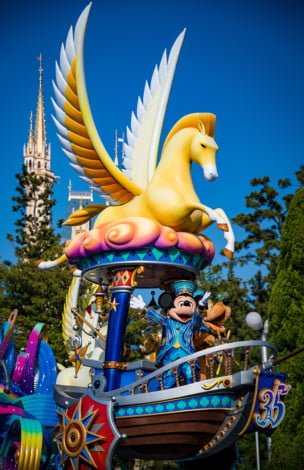 Now for the Dreaming Up review. We’ll start with what we think is an integral component of any Disney parade: the music. With Happiness is Here, we were both hooked from the moment we heard it. That soundtrack has a catchy sense of childlike wonder, and is absolutely addictive. It also has a timeless sound.

Dreaming Up’s soundtrack has more of a pop music vibe. It’s not like Main Street Electrical Parade or Paint the Night in the sense that both are very clearly products of a certain era, but it’s not timeless in the same way. We weren’t totally sold on Dreaming Up’s music after our first viewing, but after watching it another time, we were both hooked. It’s a different approach, but equally catchy. 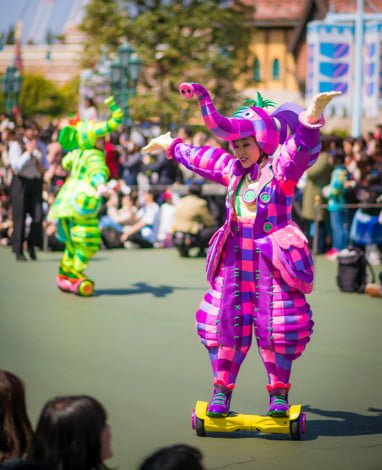 Next, the costuming. Tokyo Disneyland has historically nailed parade costuming, with some elaborate and inventive styles for performers. This is actually one regard that differentiates Tokyo parades from their United States counterparts–both the costuming and the sheer enthusiasm of these performers who always give it their all.

Dreaming Up is no different, as the street-level movers have beautiful costuming, and offer captivating performances between the main floats. My favorite of these performers is the Heffalumps on Hoverboards, which I’m hopeful will convince Sarah that hoverboards are totally safe and the future of transportation. The Pinocchio performers were another highlight for me. 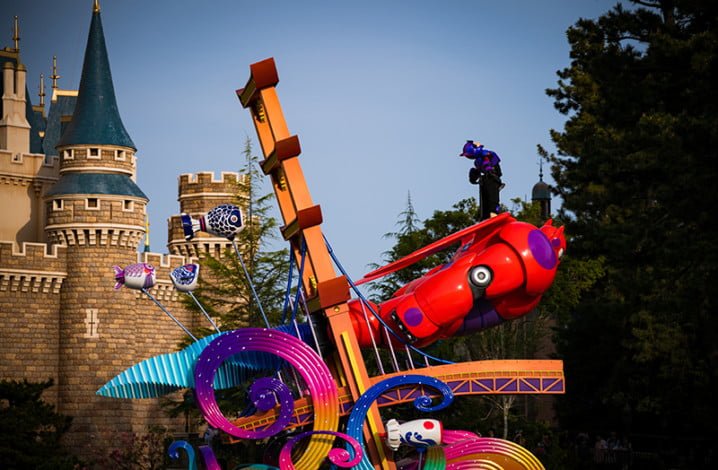 Obviously, the main draw of parades is the floats. Dreaming Up does not disappoint in this regard. The opening float is one of the coolest I’ve seen in any parade, the Baymax float is really impressive, and this is arguably the best ‘princess float’ ever. Other smaller scale floats like Pinocchio and Alice in Wonderland are just as impressive as their larger counterparts. 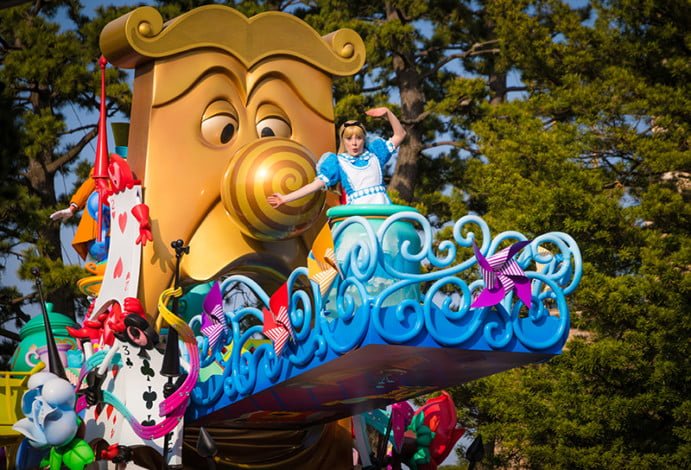 What both parades do well is present a number of floats with incredible scale and immense ‘wow-factor.’ It’s difficult to pick a winner here, because they both take such different approaches. Happiness is Here features a number of larger-than-life and ornate toys, and ends with the show-stopping balloon float featuring Minnie & Mickey Mouse.

By contrast, Dreaming Up kicks off with its show-stopping Mickey Mouse float, starting with a huge bang from the second you see it. There are several other large floats interspersed throughout the parade that are very impressive, but wisely does not try to top the scale of Happiness is Here’s final unit using scale to end on a high note.

Instead, Dreaming Up features a mesmerizing scene of Wendy and Peter Pan (led by Mary Poppins, but she’s not quite as impressive) taking flight. If Dreaming Up lags a bit in the middle, that’s washed away with this, which is truly a magical Disney moment that punctuates the parade. Two very different approaches that achieve similar results of leaving guests with a smile on their face at the conclusion. 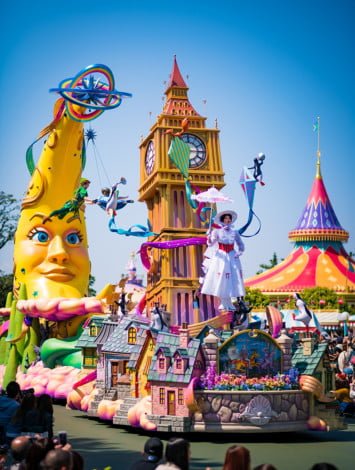 We found Dreaming Up approaches a few key things very differently from Happiness is Here, and we couldn’t help but wonder whether this was an intentional effort to differentiate the parades. I think so, and this was a solid move. Not just because it removes Dreaming Up from the long shadow cast by Happiness is Here, but because so many Disney entertainment offerings recycle the same motifs and highlight the same popular films, so it’s refreshing to see distinct approaches.

One thing from which Happiness is Here benefits is the amount of sheer detail and clever gags on each float. There were so many whirlygigs and kinetic elements that captured the imagination and conveyed a sense of whimsy. It was all very impressive, adding layers of visual interest that gave Happiness is Here an incredible amount of re-watchability. 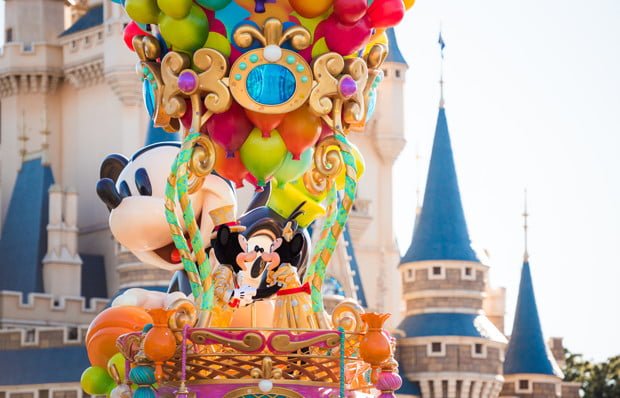 We saw Happiness is Here (pictured above–all other photos here are Dreaming Up!) a couple dozen times in person, but even on our final viewing, I was still noticing things I hadn’t previously. Reviewing photos, I can spot elements of the floats that are difficult to see with the naked eye from a distance.

Perhaps I just haven’t seen it enough up close, but I don’t think Dreaming Up has this same detailed design sensibility. There are definitely a lot of details and moving parts that typify it as an elaborate Tokyo Disneyland parade, but I didn’t see the same level of attention to detail in the floats. 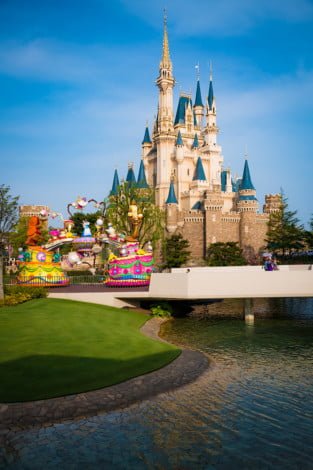 Another critique of Dreaming Up is that there’s less of a unifying aesthetic to the parade. The art design of Happiness is Here was very consistent, with similar motifs and artistic styles applied to every float. This effectively tied everything together and made it all part of a cohesive whole. It reflected the personal tastes of brilliant Disney collaborators Kevin Kidney and Jody Daily, and benefited from their distinct style.

I don’t get that feeling from Dreaming Up. In this regard, it reminds me of Festival of Fantasy, another very good daytime parade (both of which, I believe, are Steve Davison productions). I think if you randomly swapped out some floats between Dreaming Up and Festival of Fantasy, first-time viewers wouldn’t find anything ‘off’ (well, aside from the music not matching up). 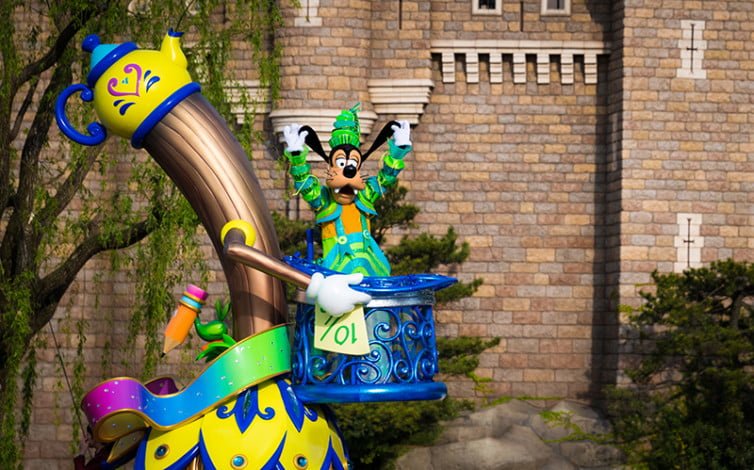 I also wasn’t particularly keen on how the Fab Five characters (plus Chip & Dale) are used. After Mickey Mouse and Pluto appeared on the incredible opening float, I expected that maybe Minnie and Goofy would close out the parade, perhaps with Chip, Dale, Donald, and Daisy in the final unit.

What I really did not expect is for all of the other characters to be squandered (in my view) on secondary broom floats. Maybe this was done because the art directors felt like these characters are so popular they didn’t need elaborate floats, or as a way to further differentiate Dreaming Up from Happiness is Here? I’m not sure, but I’m not fond of the approach. The same is done in Paint the Night, and I’m not a fan of it there, either. 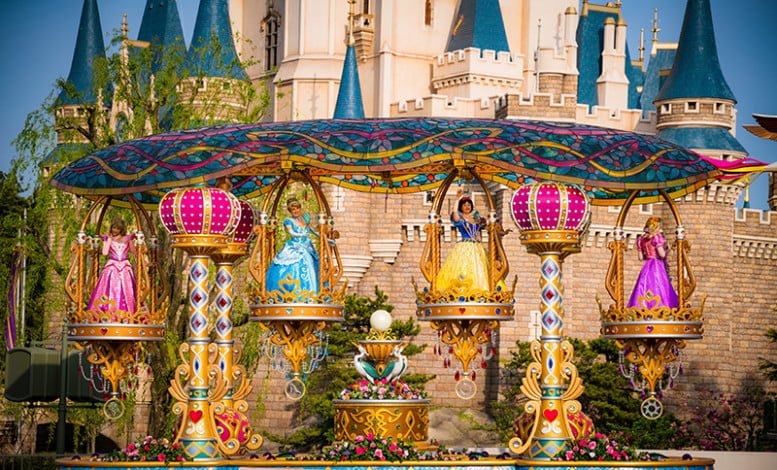 On balance, we both think Happiness is Here was the better parade. Both in terms of our personal enjoyment of it, and when attempting to view it as objectively as possible. The timelessness, layers of detail, and unifying design aesthetic all tip the scales in favor of Happiness is Here.

With that said, Dreaming Up is still the second-best daytime parade we’ve ever seen and the current #1 daytime parade in any park. Its impressive floats, ear-worm soundtrack, elaborate costuming, and other aspects of Dreaming Up all make it incredibly satisfying, and make it a worthy successor to Happiness is Here. While we’ll miss the 30th Anniversary parade, it had a good run and we’re quite pleased with having an excellent new parade for at least the next several years at Tokyo Disneyland.

If you’ve seen Dreaming Up–either on person or in videos–what did you think of it? Do you think it lives up to the legacy of Happiness is Here? Which Disney parade is your favorite? Do you agree or disagree with our review? Any questions? Hearing feedback about your experiences is both interesting to us and helpful to other readers, so please share your thoughts below in the comments!