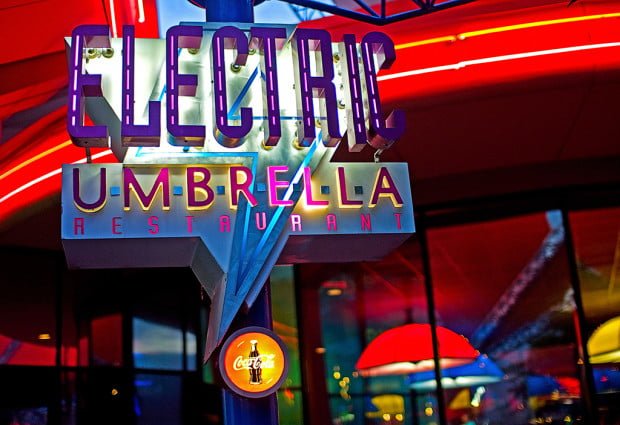 Electric Umbrella is a counter service restaurant in Epcot at Walt Disney World. This review features food photos, and our analysis of the value & quality of this Future World hot-spot. Like most in-park quick service restaurants at Walt Disney World, it participates in the Disney Dining Plan, but it does not accept the Tables in Wonderland card for a 20% discount. It is a poor use of a counter service credit if you are looking to Maximize Value on the Disney Dining Plan.

I’ll be honest: for the longest time I was dreading writing this review because doing so would require admitting that we have eaten here, well…let’s just say “a few” times. That’s embarrassing as someone who purports to know things about Walt Disney World, as eating at Electric Umbrella is about the ultimate “rookie mistake.”

Its menu embodies standard theme park fare–a stark contrast to many Epcot eateries–and if you’ve ever heard someone complain about ordinary food at Walt Disney World, there’s a good chance they ate here. The front-of-the-park location coupled with the warm glow of neon lighting beacons tourists like flies to manure.

All of that changed a couple of years ago, or so I hoped. To atone to the Disney gods for not arriving at rope drop to do Frozen Ever After (that’s my excuse and I’m sticking with it), I decided to eat at Electric Umbrella yet again. That’s when something surprising and unexpected occurred.

I pinched myself after the first bite to confirm I wasn’t dreaming. I wasn’t. It had finally happened. I had a good meal at Electric Umbrella. I ate there again about a month later having that same meal to confirm it wasn’t some sort of lucid dream, with the same result. Another good meal.

Perhaps I was overly-optimistic, or perhaps it’s the contrarian in me, but I was already gleefully preparing the review in my head, telling the redemption tale of Electric Umbrella. Then we ate there again… 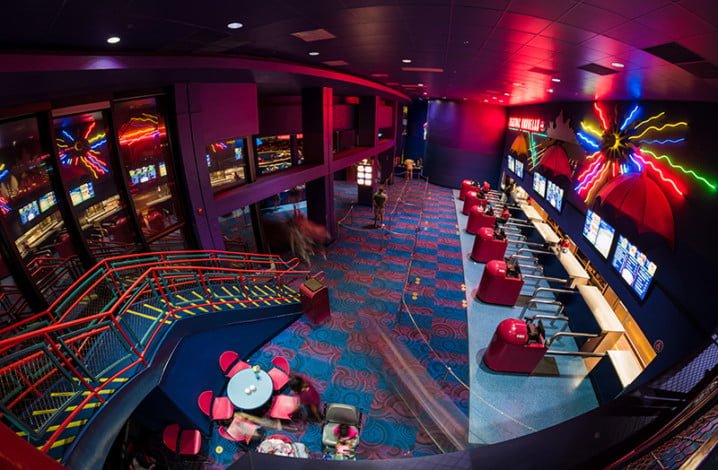 Actually, before I get to the meals, both good and bad, let’s cover the ambiance.

It is, in a word, depressing. Sure, you have rad neon lighting, but that’s about it. Otherwise, it looks like the early 1990s threw up inside Electric Umbrella, both in terms of style and the apparent age of the place. This is Epcot ’94 at its “finest.” 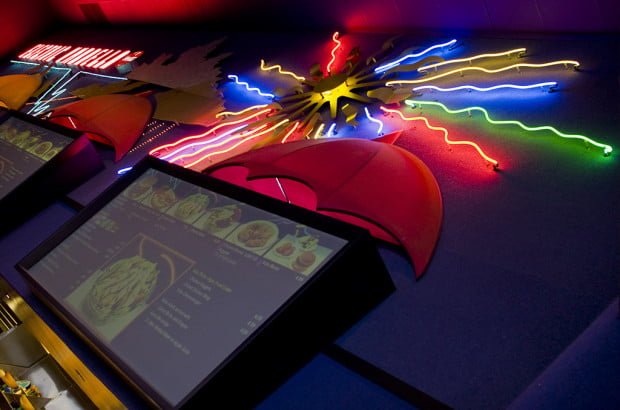 Ever visit a mall that you used to visit as a kid only to find it limping along, inexplicably still in business despite half of the storefronts being empty? You see the old toy dispensing machines and the train ride, along with colorful carpet and a mix of shapes painted in random colors on the walls.

Save for those specific details, that mall is Electric Umbrella. Not exactly the perfect spot for a romantic evening in Epcot, unless your idea of romance includes…well, I can’t even begin to imagine. 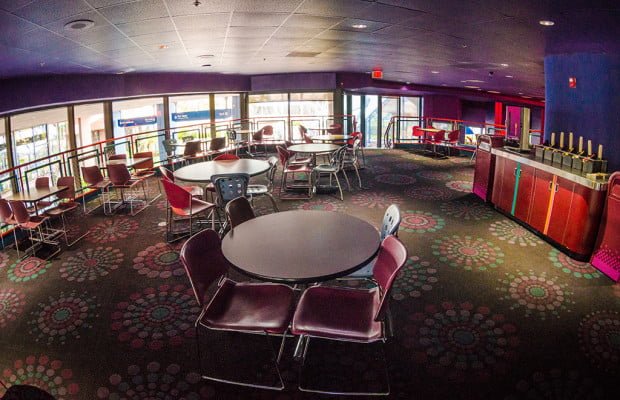 The upstairs seating is theoretically nice. It gets you away from the hordes of families so upset that they dined at Electric Umbrella that they scream out in agony.

Unfortunately, the upstairs seating is rarely open. You’ll most likely be eating with everyone else in the echo chamber of cries, screams, and shattered dreams downstairs. Seriously, this is one of the loudest restaurants at Walt Disney World. 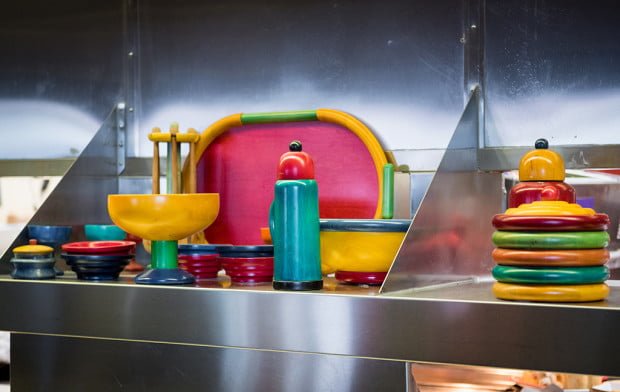 About the only upside is that you can refill your own drinks, which I’m going to include as part of this “ambiance” section of this review so at least there’s some upside.

The Coca-Cola machine is likely the aesthetic highlight of the seating area, anyways. 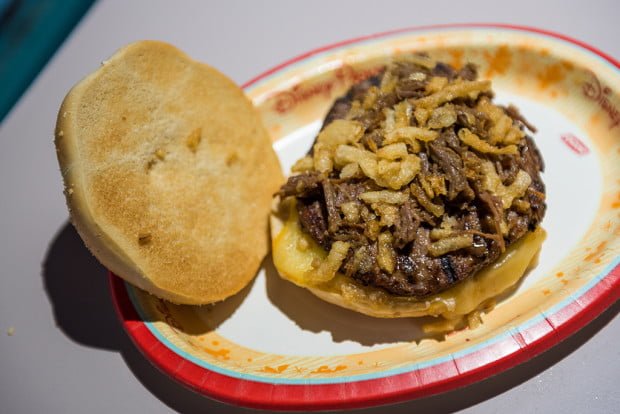 Then there’s the food. My initial excitement last year was over the French Dip Burger. This burger is topped with brisket, muenster cheese, and onion crisps.

I first tried it in an effort to sample all of the gourmet burgers that have been popping up around the parks in order to write my Best Burgers at Walt Disney World post. During that visit, I noticed several other promising menu items that seemingly had replaced the dreck of the past. 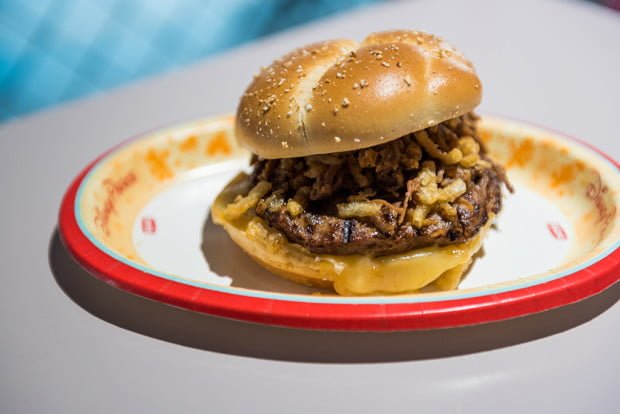 I wasn’t expecting much given the restaurant at which it is served, but I found it to be surprisingly flavorful and one of the best counter service burgers at Walt Disney World.

The brisket gives added juiciness to the burger patty, and the muenster cheese provides a kick of flavor, while the onion crisps are nice texture. 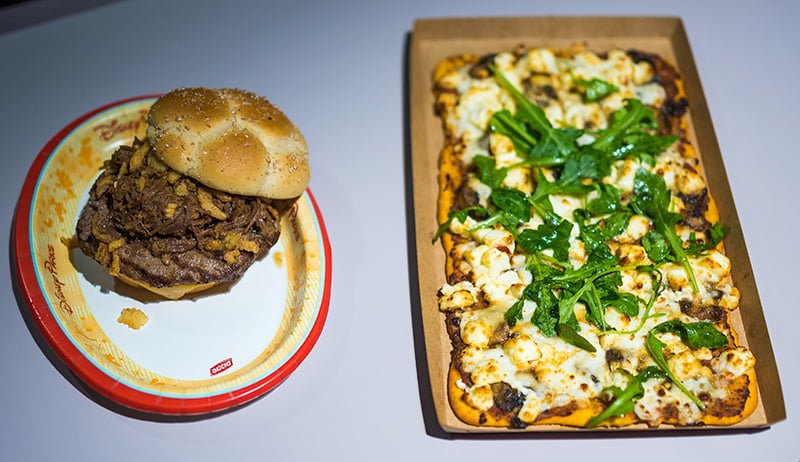 I’ve since ordered it a couple of times when I’ve been in the park late at night during Extra Magic Hours with few other options (which is why we’ve dined here so many times…not because we’re total n00bs), and have always found it to be good.

As for those other promising items, well, perhaps Disney should turn this into a Star Wars restaurant (the star war is set in the future, right?!) and have Admiral Ackbar outside yelling, “it’s a trap!” 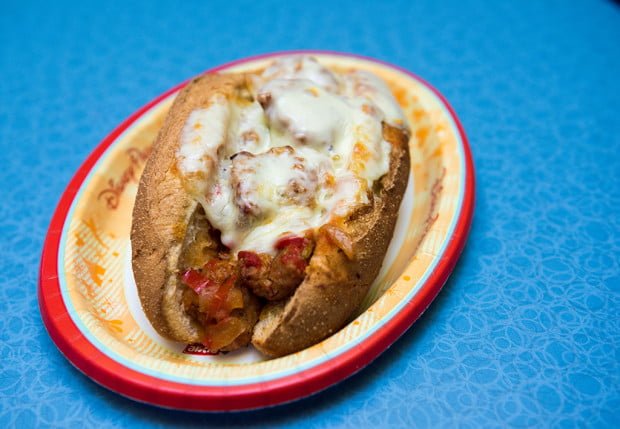 I returned to try the Sausage and Pepper Sandwich, and it’s basically the same as the old Meatball Sub, except with slightly different meat. It’s still just as greasy and uninspired as ever.

Sarah had the Energy Salad, and while she said it was an improvement over the phoned-in Caesar Salad, not by much (it has a dash of feta and nuts sprinkled in). 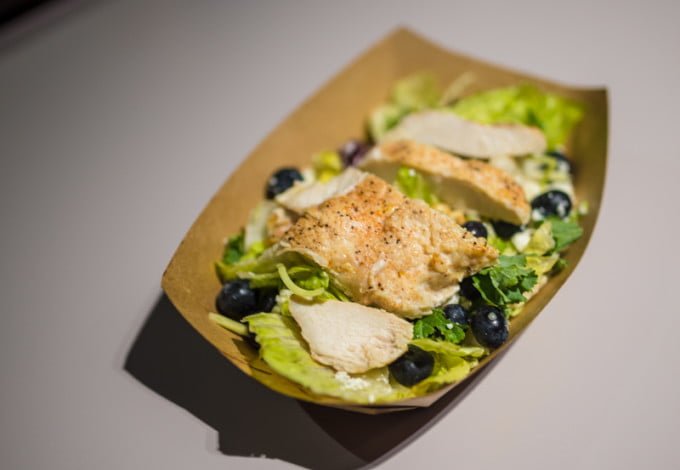 At this point, we’ve had enough recent “success” with Electric Umbrella that I’m even inclined to give the Veggie Naan-wich and promising flatbreads a shot. I’ve been burned in the past by Electric Umbrella, but it does seem like the restaurant is at least making some degree of effort now.

I was really hoping that Electric Umbrella would continue adding unique items to its menu, so I could write a positive review of what is sadly one of Epcot’s most popular restaurants. That hasn’t been the case, and although better, Electric Umbrella remains a blemish on Epcot’s slate of the best counter service restaurants of any park at Walt Disney World. 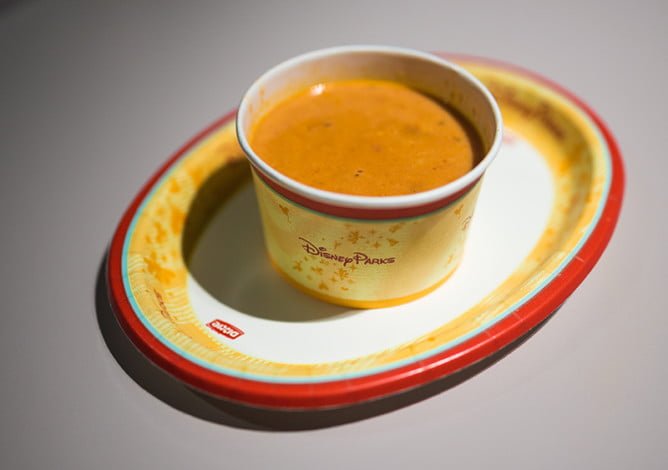 On the plus side, you aren’t guaranteed a bad meal at Electric Umbrella anymore. The French Dip Burger is a solid option, along with other menu items that are slightly more ambitious.

Still, when you have Sunshine Seasons only a short walk away in Future World and a host of options all around World Showcase, it’s difficult to recommend Electric Umbrella to anyone…except for families of burger fans and Coke addicts. 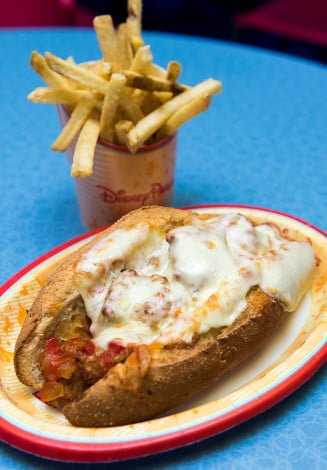 Have you eaten at Electric Umbrella? Did you enjoy the experience? What did you order? If you’ve tried anything from the new-ish menu, did you think it was an improvement? Share your thoughts and questions in the comments!