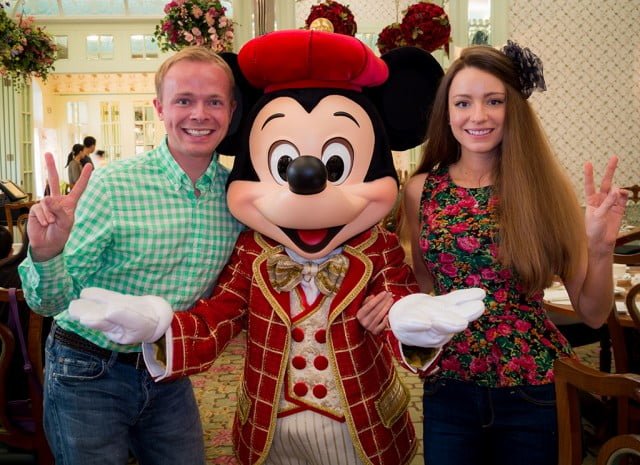 Enchanted Garden Restaurant is a character buffet at the Hong Kong Disneyland Hotel serving breakfast, lunch, and dinner. Mickey Mouse, Goofy, and Pluto in Victorian attire with some Chinese motifs. This review covers only breakfast at Enchanted Garden. For breakfast, the cost ended up being around $37 (USD) per person, with prices ranging up to $70 per person for dinner (coupons are provided to Hong Kong Disneyland Hotel guests that take about $5 off the price). The selection of foods is an international mix, with most selections skewing towards Chinese or American, with a handful of other choices, as well.

In terms of ambiance, Enchanted Garden Restaurant is very reminiscent of The Crystal Palace, a restaurant at Walt Disney World and Tokyo Disneyland. Much like Crystal Palace, it has an elegant Victorian design and uses a light color palette. In both cases, this is enhanced by greenery and windows to give it an almost open-air feeling. A very nice looking restaurant, although I’d definitely give the nod to Crystal Palace as the concept feels more fleshed out there, and the skylights add a lot to the airy atmosphere.

Unbeknownst to us, Enchanted Garden Restaurant is an incredibly popular restaurant that typically books up far in advance for breakfast. We called down to the front desk on a whim early our first morning to see what time it opened, and we were fortunate to be squeezed into the last seating (there are 2-3 seatings per meal here, rather than reservations at a specific time), and that was on an off-season day when Hong Kong Disneyland itself was rather dead. In other words, we highly recommend making advance reservations–hotel guests can do this by contacting the hotel in advance of their stay. 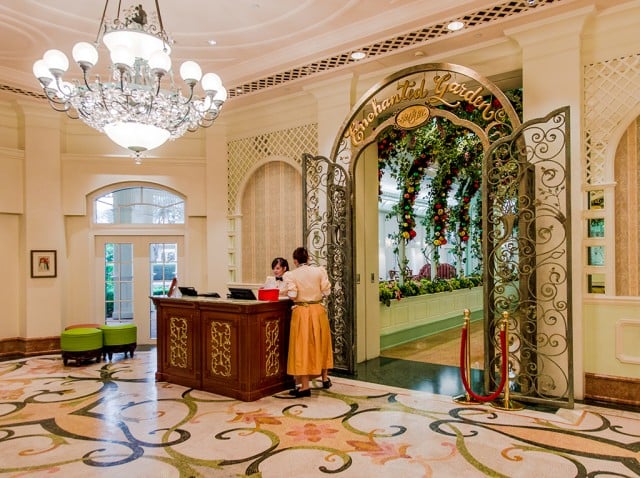 Here’s the entrance, tucked away on a lower-level corner of the Hong Kong Disneyland Hotel. Just outside the window are the hedge maze and the ocean. 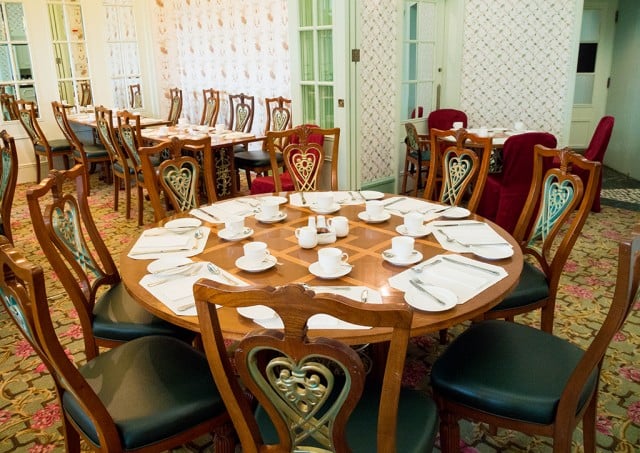 In terms of food, Enchanted Garden Restaurant had a good deal of variety for breakfast. 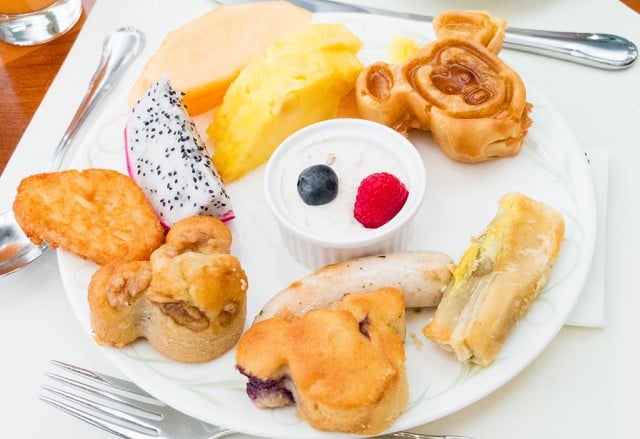 Part of it was an Asian-style breakfast, which included an oatmeal bar (I’m not sure if that’s a ‘thing’, but it sure looked like an oatmeal bar) with condiments for the oatmeal like nuts, vegetables, and small fruits. 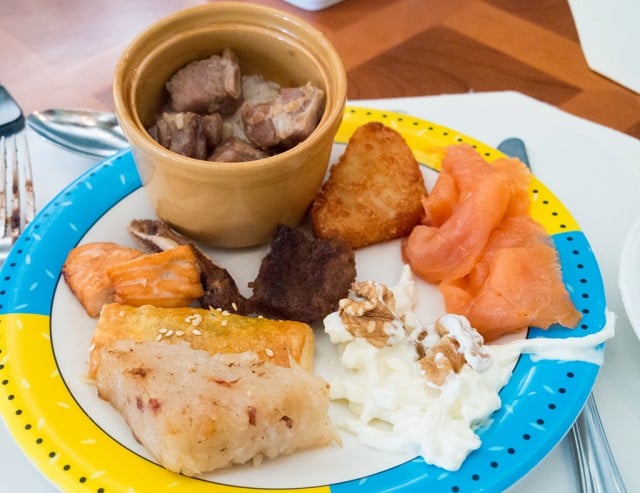 There was also Cantonese Dim Sum, and options including steamed buns, pork ribs, tea egg, yam cake, water chestnut cake, etc. As these were the local flavors, I tried to stick with them. I also thought they were the best items available, with the steamed pork ribs being especially good. (I’m all for any culture that deems ribs a breakfast item.) 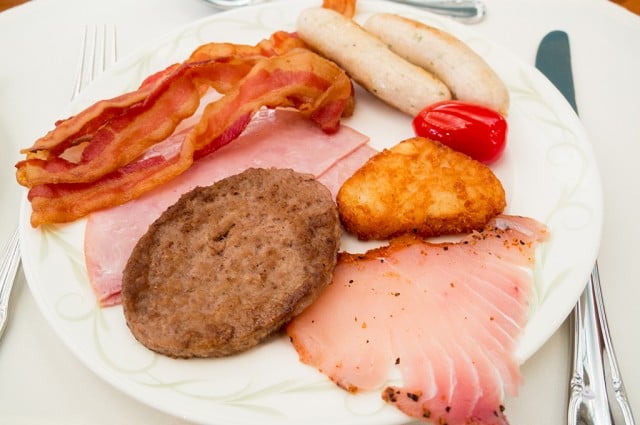 For those guests who aren’t keen on the Asian and Cantonese selections, there are also the standard American items, like baked beans, bacon, ham, various types of sausages, and eggs. There were also a variety of salads and other sides, including waldorf chicken salad and The smoked salmon, smoked tangini, and other fish were my favorites, and there were several items like this that we didn’t expect to see on the buffet. 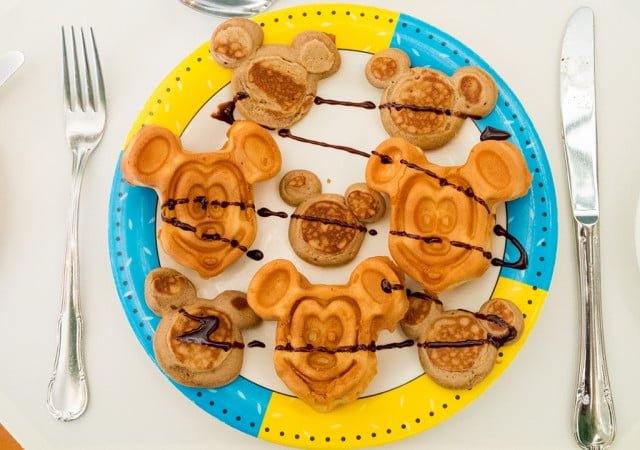 There was also a nice waffle/pancake station, where you could get Mickey Mouse shaped pancakes or waffles, and then garnish them with a variety of toppings. For this first, way-too-carefully arranged plate, I just drizzled chocolate syrup so the plate looked photogenic. Rest assured, I heaped on the toppings after this photo! 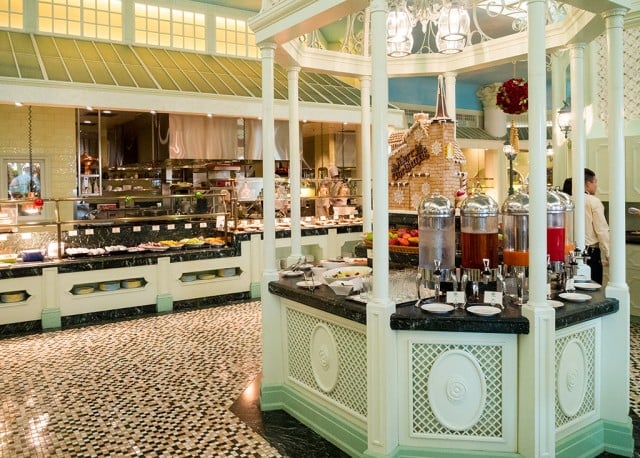 There was also a large juice, fruit, and dessert bar in the center of the serving area that had a variety of teas and vegetable/fruit juices. The selection of fruit was pretty good, with standard options like pineapple and cantaloupe, plus dragon fruit and a few other less-familiar options. There were also multiple flavors of fresh bowls of yogurt topped with fruit, including apricot and blueberry. It’s my understanding that at dinner, there’s a chocolate fondue fountain here. As much as I love some yogurt and carrot juice, I’ll gladly take a chocolate fountain instead! 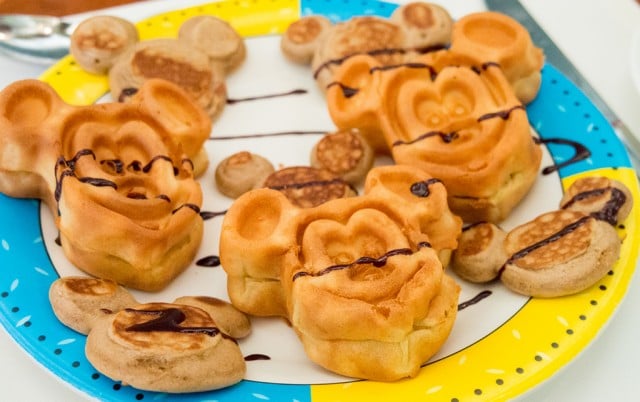 The food was generally very good, especially for a Disney breakfast. We thought that the Cantonese/Asian items were especially good, but part of this could be that they were breakfast items that we wouldn’t normally have in the United States. Even though the buffet was better than character breakfasts we’ve done in Walt Disney World, it wasn’t knock your socks off amazing. We’ve found that breakfast is typically the weakest meal that Disney restaurants do (in fairness, we find the same to be true in the real world), and that was also true in Hong Kong. “Weakest” is a relative term, thouh, and all of our other meals were excellent, so this being weaker by comparison doesn’t mean the food was bad. Far from it, actually.

Throughout breakfast, we met the Disney characters. Even more fun was hearing the reactions of kids nearby meeting the characters. One little boy’s parents even came up to Sarah and asked if he could take his picture with her, because it was what he wanted for his birthday. (Smooth move, kid!) 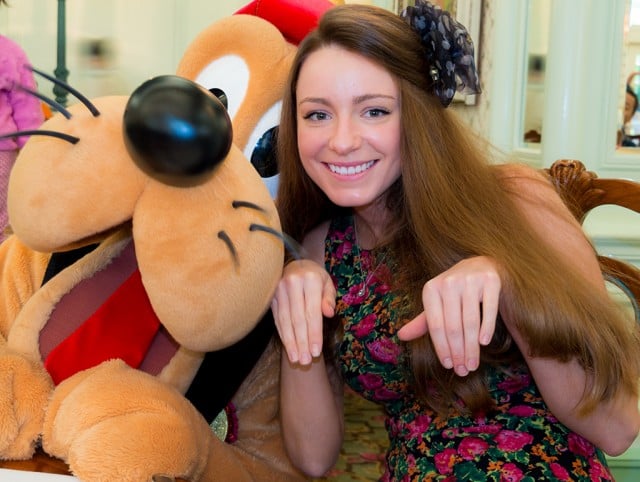 Pluto was the least interesting of the bunch. He just had a hat and a collar on. Not really sure how his attire qualified as Victorian.

Mickey and Goofy had much better outfits. I’ve heard that Daisy also meets with them for breakfast typically, but we did not see her. Character meet & greet lines were longer than most attraction lines in Hong Kong Disneyland, so even meeting three characters plus the breakfast might present good value for some guests with limited time. 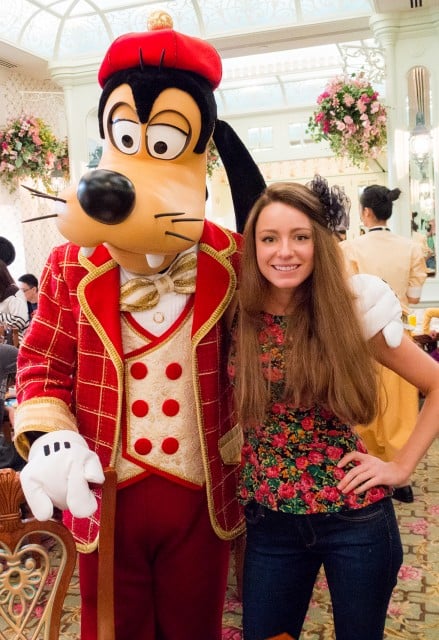 Overall, Enchanted Garden Restaurant had a buffet lineup that surpassed every breakfast buffet we’ve had at Walt Disney World. There was excellent variety from fruits to dim sum to quality meats to juices and other items. The ambiance was great, with a setting reminiscent of Crystal Palace and characters in awesome outfits. It was a great experience, and one we absolutely do not regret doing. With that said, breakfast is a one and done for us, as we got our photos with the characters in these cool outfits, and the prices were too high to justify a return visit for the food alone. Considering the higher quality food, it’s about in line with what you’d pay at a breakfast buffet in the US parks, but we similarly think those are a bit overpriced. Disney breakfasts rarely justify the prices charged, although in this case we might have come close to getting our money’s worth thanks to the ribs and smoked fish. We’d like to try dinner at some point in the future, but for the price, it makes more sense to do the excellent, fine dining Crystal Lotus in the Hong Kong Disneyland Hotel instead.

What do you think of Enchanted Garden Restaurant? Have you dined here? Like the character outfits? If you have any questions or thoughts to share, please post them in the comments. We love hearing from readers!