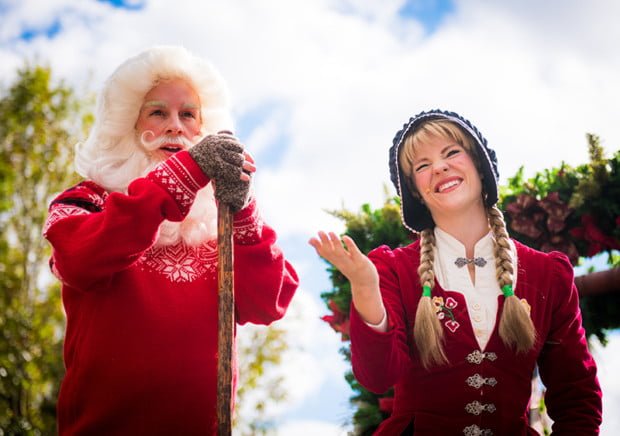 The Storytellers sharing traditions of Christmas and other holidays around the world are one of our favorite pieces of entertainment at Walt Disney World. This post covers our tips & review of the entertainment offerings in Epcot’s World Showcase. (Last updated November 26, 2018.)

In terms of entertainment during the Epcot International Festival of the Holidays, there are a few options. The highlight for us is the ironically earth-shaking “Peace on Earth” tag at the end of Illuminations, but the Holiday Storytellers, decorations, and music acts also make for a festive time at Epcot. We have a separate post offering IllumiNations: Peace on Earth Viewing Tips.

Candlelight Processional is another big aspect of Epcot’s Festival of the Holidays, but we’ve already separately covered that, so we won’t discuss it here. Of course, we still mourn the Lights of Winter display, and Epcot will never have the same luster during the Christmas season for us until those return or a replacement is added in their place. Instead, we’ll focus on a less-celebrated (but no less important) aspect of Festival of the Holidays: the Holiday Storytellers, consisting of various Santas (and others) from around the world…

We assume you won’t be taking a separate day to experience Holidays Around the World at Epcot (we don’t recommend that you do), so this article will share some of our tips for weaving the Epcot International Festival of the Holidays into your normal visit to Epcot, including our take on what you should prioritize, and what you can skip. 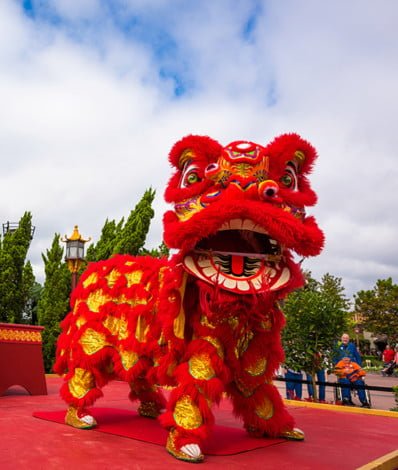 The biggest change is that several storytellers have been swapped out for bands. There are now bands in Morocco, Germany this year, in addition to Canada and Mexico, which swapped their storytellers for musicians a few years ago. We actually prefer this approach; as enjoyable as the Storytellers are, seeing them all became a bit monotonous. Now, you could say that the “pacing” is better, alternating between storytellers and bands.

We’ve seen all of these Storytellers over the years, but never all of them in the same day. We haven’t put a ton of effort into it, because that’s a lot of standing outside. Plus, we’ve never come up with a sound plan for efficiently seeing them all in order. 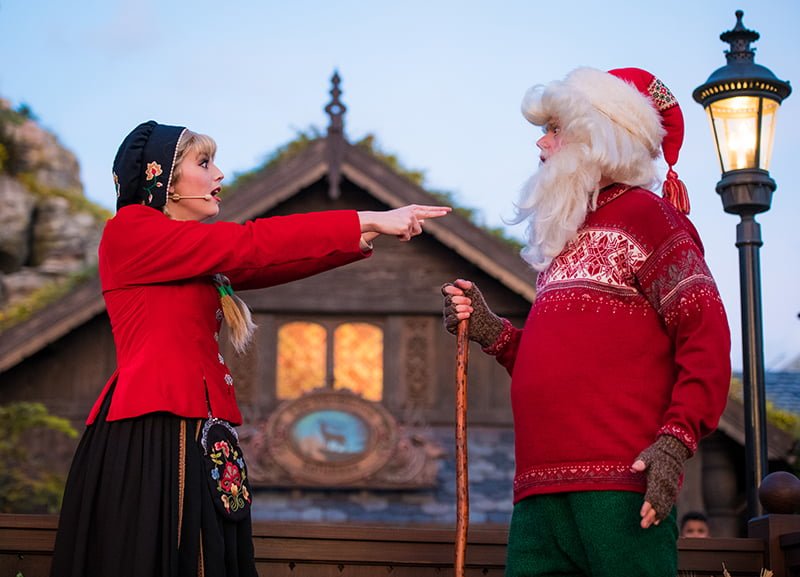 Another complicating factor is the weather. These performances mostly take place outside, and not in the shade (much like other World Showcase performances). This normally isn’t a problem, as December weather in Orlando is fairly mild. If it is sunny and hot, seeing more than a couple of these in an afternoon can be unbearable, though.

Despite afternoon being the hottest time of the day (if it is hot), that’s when we recommend seeing the Storytellers if you only have one day in Epcot. Crowds gather around the Storytellers, but they are typically pretty manageable at worst. Plus, usually crowds gather once they see something going on, so if you’re actually following a schedule and arrive 5 minutes before show time, you will have no issue getting a good spot, except perhaps on the busiest days of the year at Walt Disney World.

We recommend the afternoon because this is the busiest time of the day at Epcot’s attractions, so doing as many attractions in the morning and at night is pragmatic, while using the Storytellers as a nice afternoon “break” or way to kill time while waiting for FastPasses.

When it comes to attractions and entertainment, we always recommend that you experience everything you can rather than relying on what other people tell you is good or bad. In our experience, seeing a few of the Storytellers is fun and interesting, but seeing them all is monotonous.

Here’s our brief recommendation with regard to each of them: 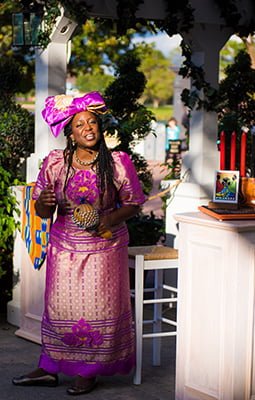 We don’t consider any of these Storytellers “bad” (to the contrary, they’re all good), but it’s tough to see more than a few in a day. The only can’t-miss ones for us are Norway, China, and Italy. United Kingdom and France are both good, but the Santa characters are pretty similar to one another, so choose one or the other. Pencil any other Storytellers in as time allows.

For the past several years, part of Epcot’s holiday event has been a seasonal snack or two at each of the bakeries or counter service restaurants around World Showcase. This is something we’ve really enjoyed in the past, and we’re happy to see it expanding again, with more Holiday Kitchens (think Food & Wine Festival) in addition to the snack offerings. We’ll be back with a dedicated post for these new food options.

That does it for the Storytellers who highlight the Festival of the Holidays at Epcot! With Candlelight Processional, the Holiday Storytellers, and Illuminations: Peace on Earth, plus holiday snacks and decor, you could probably spend a day taking in just the Epcot International Festival of the Holidays. However, that’s not what we recommend, as seeing every Storyteller in succession would be fairly taxing, especially for kids. Instead, mix some of these holiday offerings with a normal day at Epcot to give a Christmas flare to a normal day in the park.

What do you think of the Epcot International Festival of the Holidays? Which aspect of it is your favorite? Do you have a favorite Holiday Storyteller? Hearing from you is half the fun, so please share your thoughts in the comments!