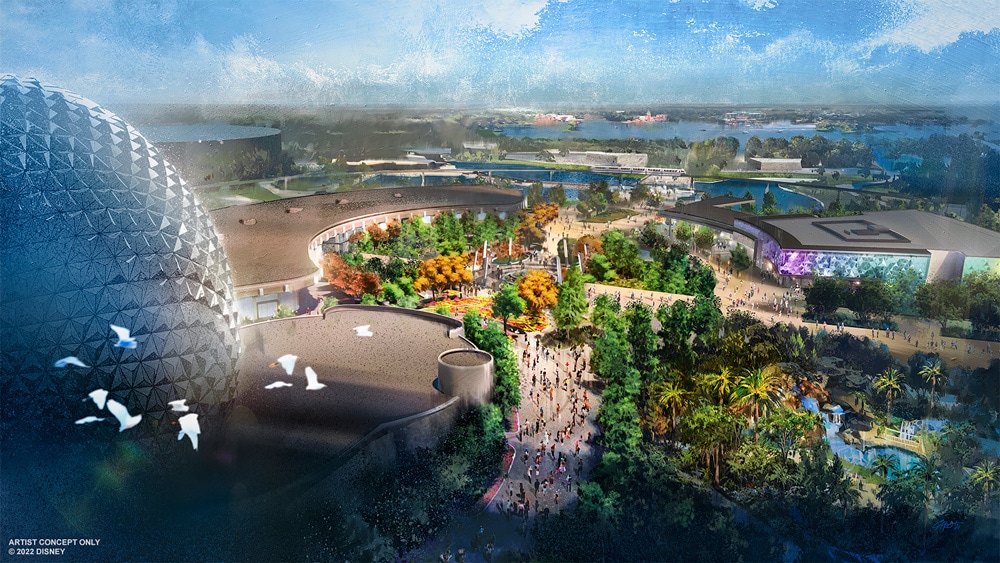 Since the start of Walt Disney World’s 50th Anniversary, more substantive additions have opened at EPCOT than all of the other 3 parks combined. While its transformation is far from complete, there have already been several major components of the project that have debuted and proven popular with guests.

Remy’s Ratatouille Adventure delivered a much needed family-friendly attraction in World Showcase, balancing out Frozen Ever After on the other side of the lagoon. Harmonious is a blockbuster nighttime spectacular that draws huge crowds on a nightly basis. Admittedly, neither of these offerings do a ton for me and I have quibbles (some minor, some major) with both–but there’s no denying that they are crowd pleasers.

Then there’s the front of the park. While not addressing any urgent need, Space 220 is an excellent eatery, an interesting counterpart both to Mission Space and Coral Reef on the other side of the park. Connections Cafe and Creations Shop don’t wow, but they’re material modernizations of dated dining and retail that were previously stuck in the 90s. Then there’s the biggest upgrade of all, which is what inspired this post…

Guardians of the Galaxy: Cosmic Rewind is the blockbuster attraction that EPCOT has needed for at least 2 decades. Purists can debate whether it fits the mission and spirit of the original incarnation of the park, but that’s not the point of this post. One thing is indisputable: Cosmic Rewind is immensely popular with average guests who actually have ridden it.

In terms of drawing power, Cosmic Rewind not just an incremental improvement over Universe of Energy; it is the kind of headliner ride around which people will plan–and even book–entire vacations. There’s a reason Walt Disney World has a nationwide marketing campaign focused solely on this one ride. It’s very good, incredibly fun, and Florida’s first (and maybe only) major Marvel Cinematic Universe attraction. 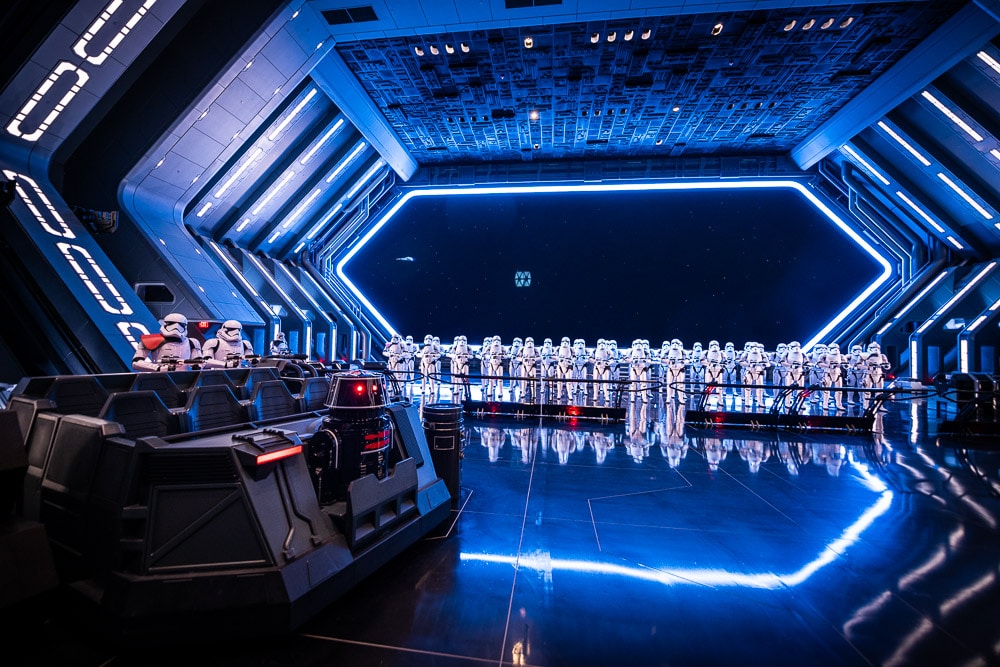 Essentially, Guardians of the Galaxy: Cosmic Rewind is to EPCOT what Avatar Flight of Passage is to Animal Kingdom or Star Wars: Rise of the Resistance is to Hollywood Studios. While other additions for those two parks came around the same time as their respective headliners, it was those specific rides that had drawing power.

Once guests arrive at Animal Kingdom and Hollywood Studios, they discover the other top-notch additions in those parks. In particular, the whole of Pandora – World of Avatar and Star Wars: Galaxy’s Edge. At Animal Kingdom, there are other atmospheric enhancements, wildlife exhibits, and more. Hollywood Studios has gone even further, with Mickey & Minnie’s Runaway Railway plus Toy Story Land essentially transforming that park as compared to what it was a decade ago. 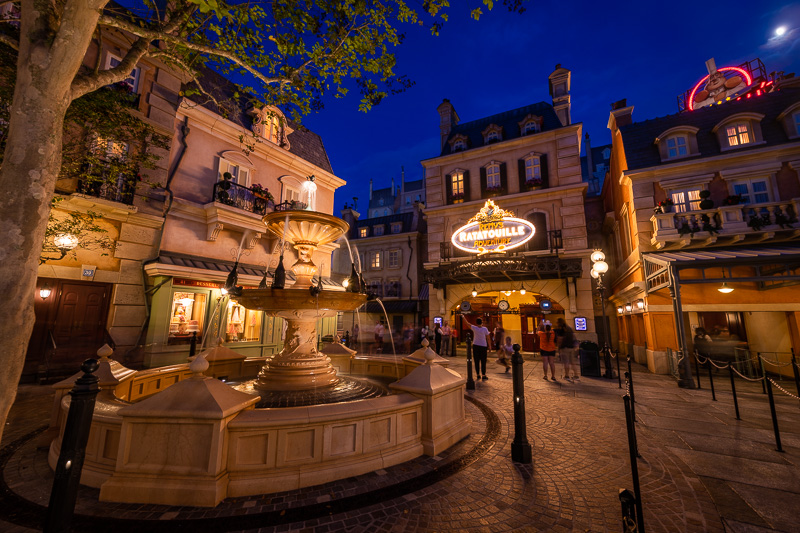 The case could be made that the same has or is happening with EPCOT. The Streets of Paris section of the France pavilion is a charming opening act to Remy’s Ratatouille Adventure. The reimagined entrance area rights past wrongs and is a much more inviting space, with fantastic lighting and visual effects.

In the future, Moana’s Journey of Water will likely deliver the type of interactive play area for kids that has been sorely missing from recent expansions at Hollywood Studios and Animal Kingdom. That and other aspects of the EPCOT transformation have been well done–the park is transforming and coming into its own. 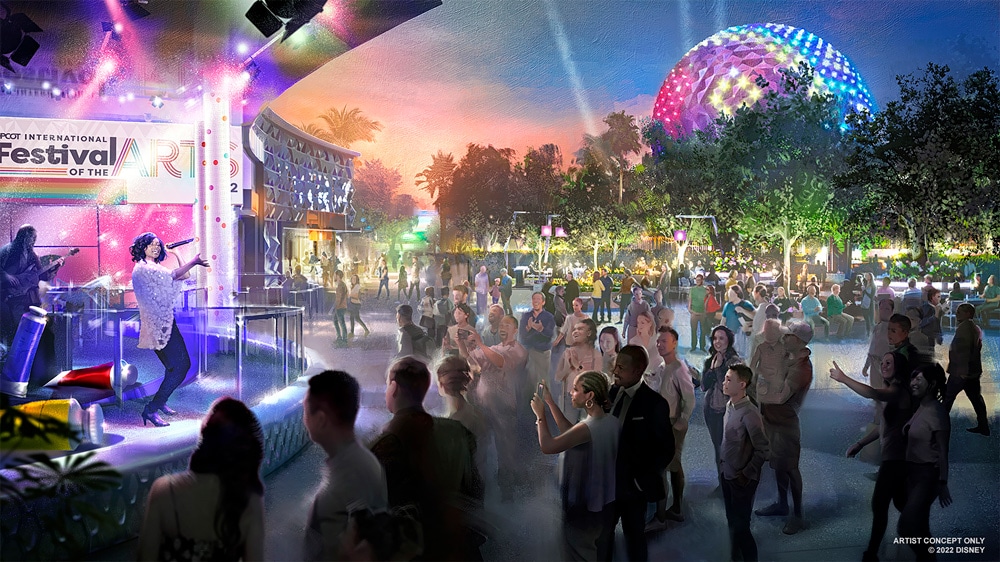 Nevertheless, it’s difficult to muster much enthusiasm for the rest of the EPCOT overhaul that’s currently behind construction walls (known “lovingly” around these parts as the Giant EPCOT Dirt Pit™️).

One month ago, Walt Disney World finally announced the plans for this: CommuniCore Hall & Plaza. Our commentary in that post doesn’t exactly feign enthusiasm for the “reimagined” project. In the month since that news, I’ve ruminated on the plans more and also spent a lot of time in EPCOT for the sake of Guardians of the Galaxy: Cosmic Rewind.

Seeing the massive success and popularity of Cosmic Rewind (which would undoubtedly command multi-hour waits and colossal crowds were it not limited by the virtual queue and park reservations), my recurring thought has been: Disney needs to go bigger with the EPCOT plans. 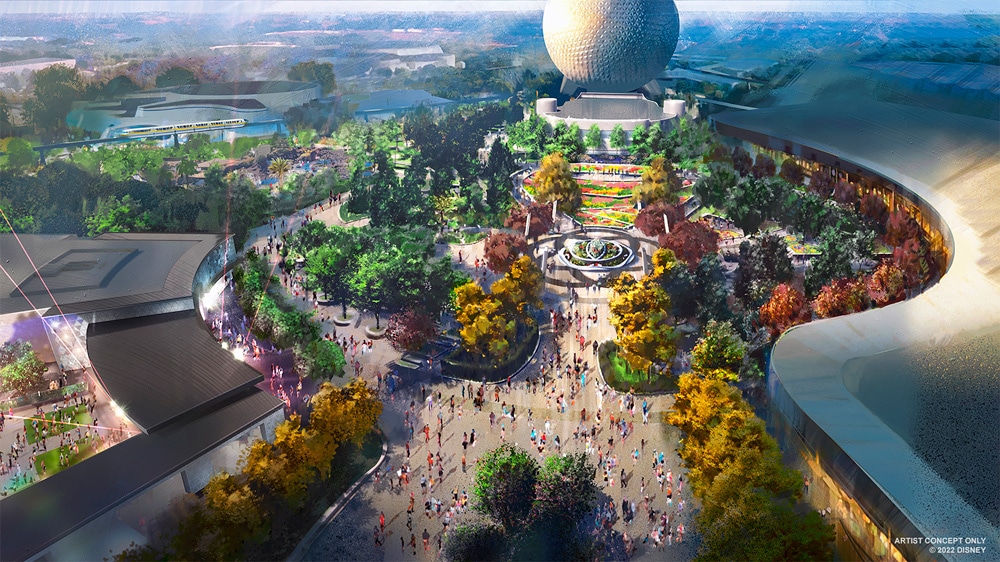 Specifically, with the central spine and what’s to become CommuniCore Hall and Plaza.

While there was some disappointment from Walt Disney World fans about the scaled back plans, it also felt like there was a sense of concession. That we’ve already endured a sea of construction walls for a few years, and that we (collectively) are just ready for the park to be finished. 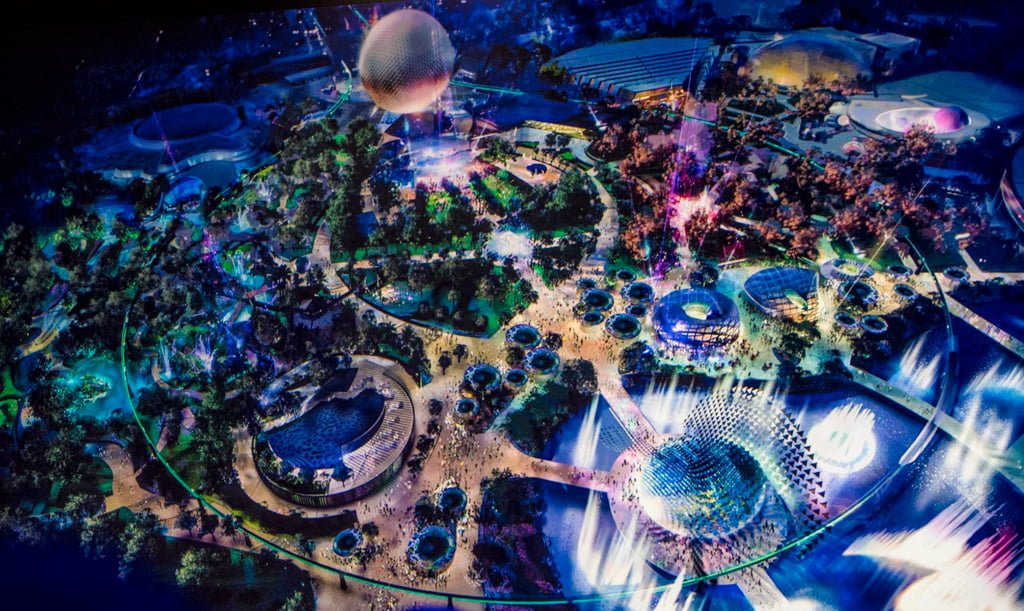 That’s understandable and I share some of that sentiment.

However, I also look at the previous concept art–both the 2017 version (above) and the 2019 version (below)–for the central spine redesign and cannot help but wish we were getting either of those instead. They’re both undeniably more ambitious, each with elements evoking the sense of optimism for which EPCOT is known.

There’s also the realization that Imagineering only has one shot at this. Whatever is built in that massive dirt pit is likely it for a long time. When those construction walls finally come down, they’ll reveal the version of EPCOT’s core that will exist for decades to come. There’s no expansion pad or area set aside for future development a few years from now.

Like so many Walt Disney World fans, I am ready to visit an EPCOT free of construction walls. And while the prospect of 2-3 more years of those walls is not particularly appealing, I’d take that over 2-3 decades of CommuniCore Hall and Plaza.

That’s why, from my perspective at least, it’s more forgivable to shelve plans for Mary Poppins in the United Kingdom, the reimagining of Spaceship Earth, Play Pavilion, or even an ambitious Journey into Imagination overhaul.

All of those could be picked up again when the time is right, the budgets are healthy, and the vision is there. Those areas being ignored is only temporary–fixable in the future. (Patience is the key to being a Figment fan–we’re used to plans being postponed and are willing to play the long game!) There’s no second shot at the core of the park. 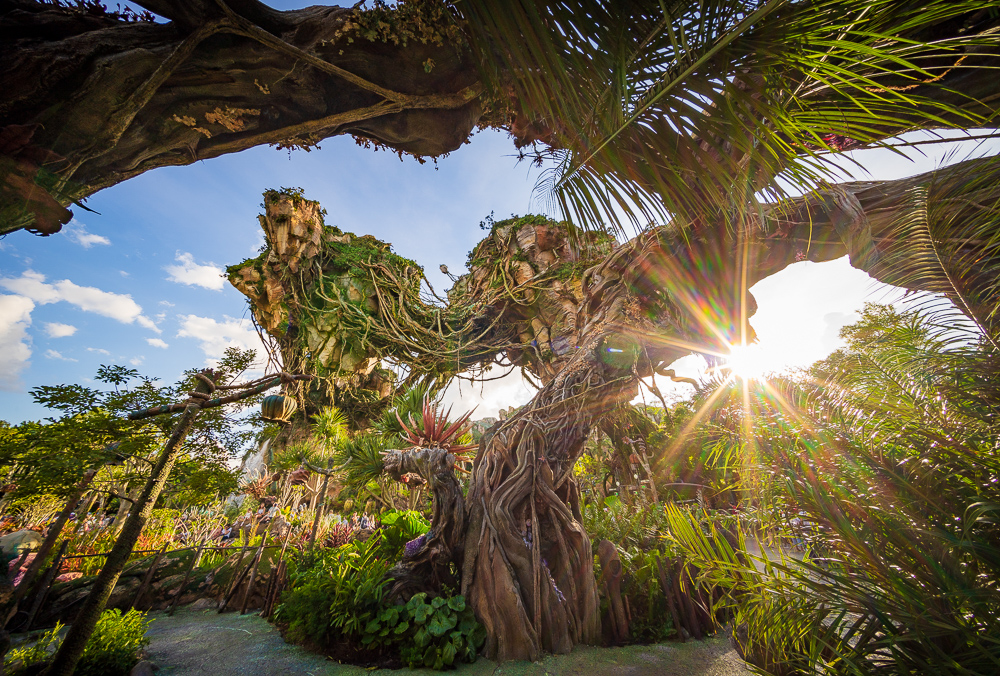 Obviously, that area was never going to be the richly-themed lands of Pandora or Galaxy’s Edge. Even in prior visions for the overhaul, it was about improving the sense of place and making it an inviting jumping off point for the other ‘worlds’ of EPCOT.

Each of those incarnations also offered iconic elements–fanciful fountains, ambitious architecture, or statement design pieces. There was the wishing tree, enchanted forest, story fountain, and futuristic multi-level festival center. These elements would bolster the entire area, while also indirectly improving both Connections Cafe and Creations Shop by virtue of what would be visible outside those giant floor-to-ceiling windows. 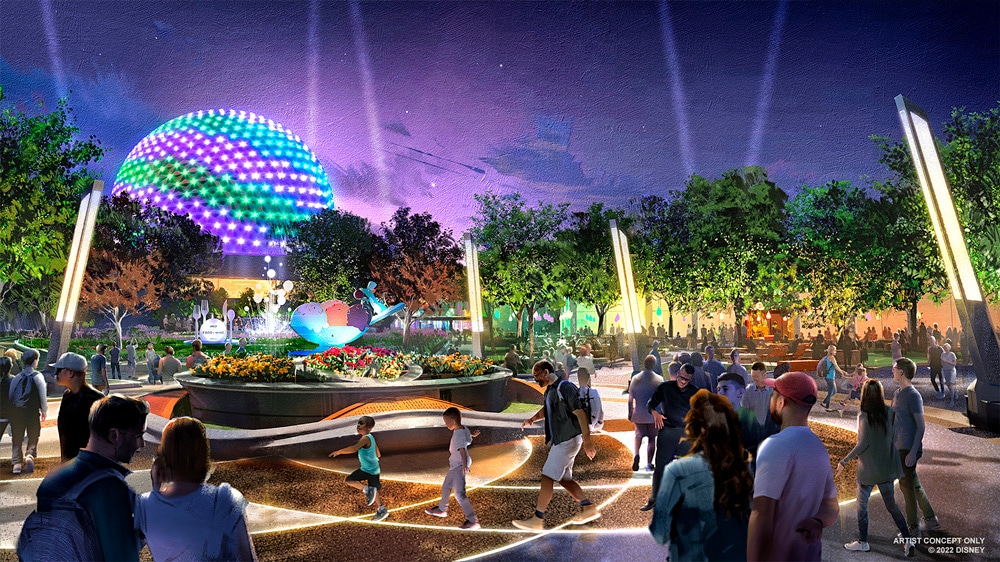 Reducing all of that to a planter, trees, and single-story hall–not much different from what it replaced–just feels lacking. Instead of elevating the whole area, it sounds like it’ll be fairly familiar to what was already done with trees and planters in the entrance area.

That’ll just make it blend together into a single park-like space that’s only punctuated by Spaceship Earth. (In fairness, that is still quite the ‘statement design piece,’ especially with the beautiful Beacons of Magic at night.)

In particular, scaling back the festival center plans feels a tad short-sighted. In addition to being an architectural exemplar, that stunning multi-level building was going to have a lot of event space, including top-level viewing for Harmonious. Just imagine all of that now-unrealized revenue from dessert parties and other offerings with unparalleled views!

It made sense to shelve the tiered festival center plans right during the closure and even subsequent reopening when Disney was hemorrhaging money, attendance was abysmal, and analysts were forecasting that it could take until 2024 or beyond before travel recovers. Thankfully, things have improved faster than anyone expected, demand is strong, and guest spending is exceeding Disney’s expectations. Over time, the return on investment in the multi-level festival center should alone justify its upfront costs. 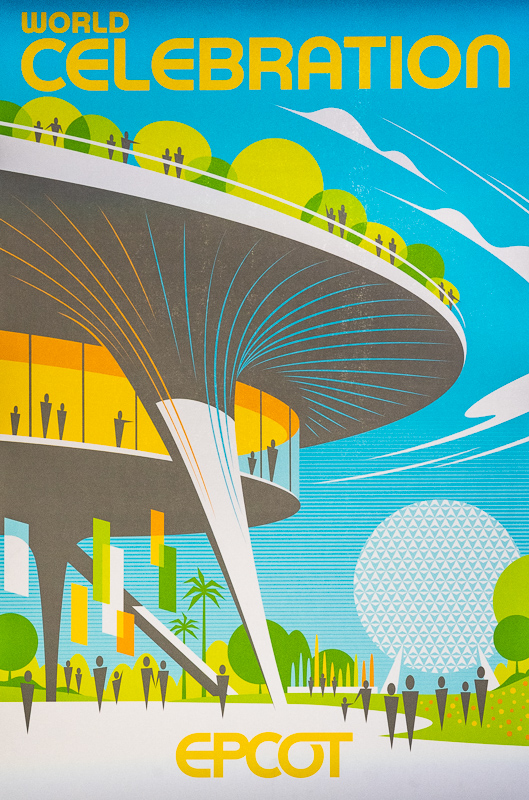 Guardians of the Galaxy: Cosmic Rewind only cements all of this further. At the time when Walt Disney World announced the CommuniCore Hall & Plaza plans last month, that Marvel E-Ticket hadn’t yet opened to rave reviews and tremendous popularity. Presumably, Disney had more than an inkling that it would be a huge hit, but it wasn’t certain–there was also a point when the company expected John Carter to be a tentpole franchise.

Even if there is a brief recession or pent-up demand fizzles out, Guardians of the Galaxy: Cosmic Rewind is the kind of headliner that’s going to be drawing people to Walt Disney World–and EPCOT, specifically–for years to come. It’s the turning point for the park–the foundation for the future.

Ultimately, that’s my ‘old man yells at cloud’ pitch into the abyss for Walt Disney World to (once again) reevaluate its plans for the central spine of EPCOT and go bigger. Given the groundwork that has already been laid, it seems like the real risk is going too small rather than too big.

To be sure, I’m not expecting the company to suddenly alter course and revert back to EPCOT Center; I know that ship sailed long ago. What I want is actually the opposite–for the new EPCOT to step out of the shadow of the past and establish its own ‘center’ that wows guests for years to come. Rehashing what was previously there, adding trees, and giving it a name that leans on the past is not the path to that. This new area should be ambitious, inspiring, and imbued with its own unique spirit of optimism, kinetic energy, and excitement. At the end of the day, what’s more “EPCOT Center” than that?!

What do you think of CommuniCore Hall and Plaza? Think I’m being too harsh on the latest plans for EPCOT’s central spine redesign? Are you excited by what’s to come, just ready for construction walls to come down, or willing to wait? Is the CommuniCore plan an exciting development, or underwhelming as compared to the previous multi-level festival center? Looking forward to any of these projects coming to EPCOT? Disappointed about anything that has been delayed or cancelled? Any questions we can help you answer? Hearing your feedback–even when you disagree with us–is both interesting to us and helpful to other readers, so please share your thoughts below in the comments!