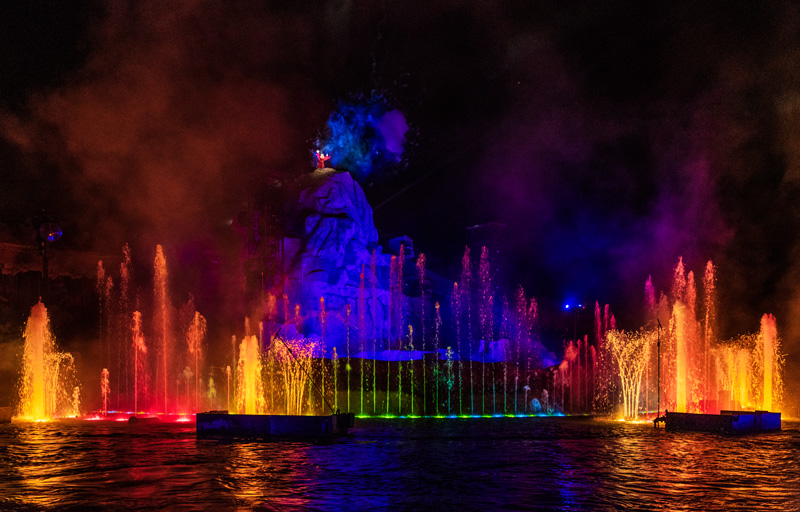 “When will Fantasmic return?” is a question Walt Disney World vacation planners and fans have been asking for nearly two years. There’s been a ton of speculation and rumors about the nighttime spectacular coming back to Hollywood Studios to help with crowds. (Updated September 25, 2022.)

In fact, there was a point early last year when a heavily-modified Fantasmic was rumored to be the first nighttime spectacular to reopen at Walt Disney World. That was literally a year ago–still in the “era” of physical distancing and more stringent safety protocol–and fizzled out for a few reasons.

The main one was Walt Disney World opting to undertake a fairly significant refurbishment project to the amphitheater and its infrastructure. Well, “opting” might be the wrong word there, as there were also credible rumors that at least some aspects of the project were necessary to repair damage resulting from the nighttime spectacular not running for so long.

In the ~9 months since then, Walt Disney World has brought back virtually all other entertainment, including the daytime parade, cavalcade, dance party, and castle stage show at Magic Kingdom, all stage shows at Animal Kingdom, and restored performances that were previously modified at DHS. Even atmospheric acts are starting to come back. Meanwhile, it’s been crickets about Fantasmic for months.

The good news is that we finally have an official update on the return of Fantasmic to Disney’s Hollywood Studios! 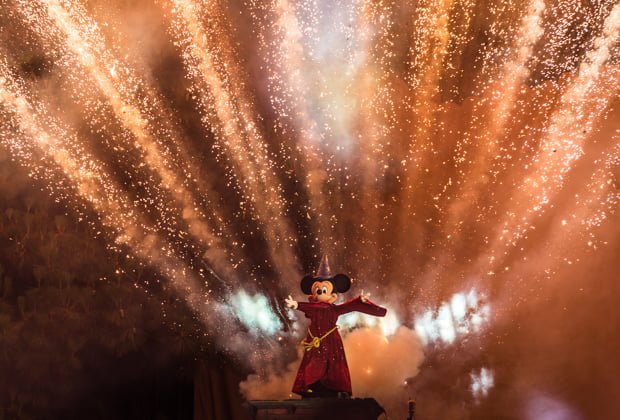 To the surprise of just about everyone, Disney did not reveal a return date for Fantasmic at the D23 Expo. If Vegas did odds for announcements, this would’ve been the favorite. And yet, it did not occur.

The most likely possibility was that rehearsals were not far enough along to have a concrete debut date set at that time. It’s also possible that Disney wanted to focus on splashy news, not the (overdue) restoration or return of entertainment. (Yet, exactly that was announced for Disneyland.) 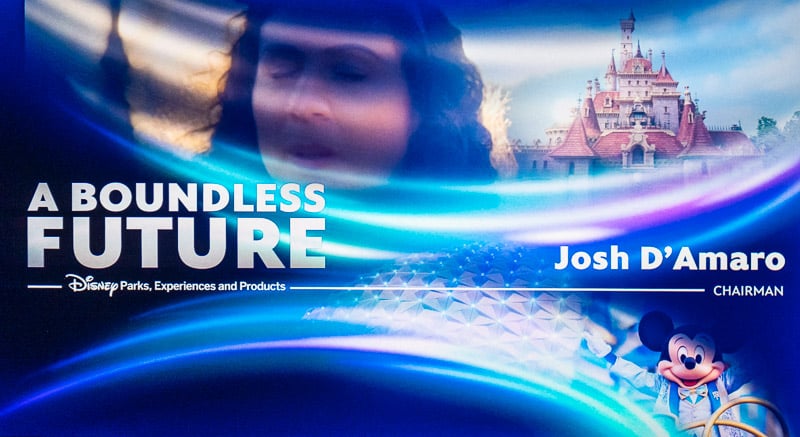 Given this and other morsels of information we’ve heard about entertainment in Walt Disney World’s new fiscal year, we believe the lack of a concrete date is the more likely explanation. With that in mind, we’ve (yet again) revised our predictions and timeline for the return of Fantasmic at Disney’s Hollywood Studios.

Sadly, we can now pretty much rule out EPCOT’s 40th Anniversary and Walt Disney World’s 51st Anniversary. We also probably can rule out Columbus Day/Indigenous Peoples’ Day and the fall break week that follows.

On a positive note, Fantasmic is returning, and those plans will not be derailed this time. Rehearsals are still underway, and have been for well over a month.

When it comes to performer-heavy entertainment, it’s been pretty typical for Walt Disney World to take about 2 months from the time of rehearsals starting to shows returning.

For both Festival of the Lion King and Indiana Jones Epic Stunt Spectacular, the turnaround time was a little over 2 months. I’m not completely confident about when Finding Nemo: The Musical started rehearsals, but I think it took about the same amount of time. 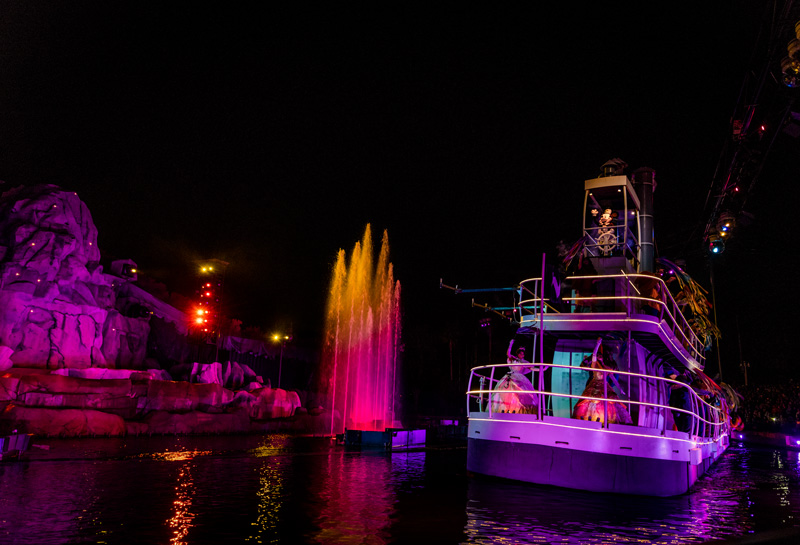 It’s safe to assume Fantasmic’s timeline will be pretty similar. New scenes might complicate or extend this a little, but probably not too much. The fact is, all of these productions have been modified and also have had plenty of new performers. For all intents and purposes, there’s an element of newness to all of them.

Accordingly, mid-October 2022 is the absolute earliest return date for Fantasmic, and even that assumes rehearsals did not just start when Walt Disney World first posted about them and that there haven’t been any unforeseen delays. This seems unlikely, as it would mean a more condensed timeline than any other production, and Fantasmic is arguably more complex than any of those. It’s likely to have a longer rehearsal timeline, not a shorter one. 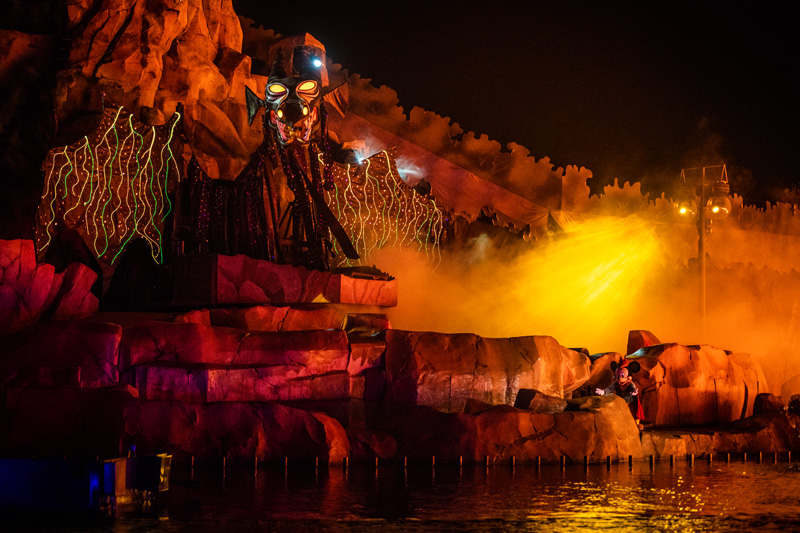 At this point, our expectation is that Fantasmic returns sometime in the last week or so of October 2022. Although Columbus Day will be a busy week, it’s highly unlikely that Fantasmic will be ready by then. So anyone with fall breaks or just visiting during the first half of October shouldn’t get their hopes up.

Similarly, anything after Veterans Day (November 11, 2022) is also less likely. We’d stop short of saying “highly unlikely,” as Fantasmic has already been delayed more than once and further technical difficulties are certainly possible. However, this is the furthest along things have been, and barring any unforeseen delays, we’d expect the opening to be about a month away. 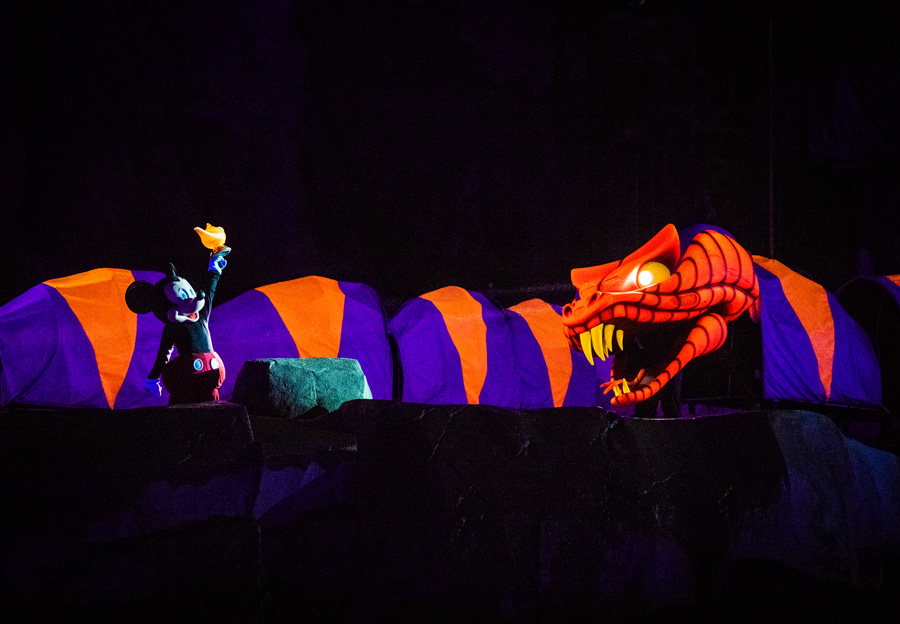 In addition to the statement that Fantasmic would return in 2022, Walt Disney World revealed more about changes to the nighttime spectacular. Per Disney, when Fantasmic reopens, it will incorporate an all-new sequence featuring live performers, stunts, special effects and more.

Tom Vazzana, Show Director with Walt Disney World Creative Entertainment teased the work his team had been doing on Fantasmic. In a burst of excitement, he said: “This segment will bring hope and joy to your heart in a scene that you are not going to believe. I can’t wait to tell you more about it…but I can’t. So we’ll just move on.” (For those who are unfamiliar with him, Vazzana is generally beloved by fans for his quirkiness, passion, and authenticity.) 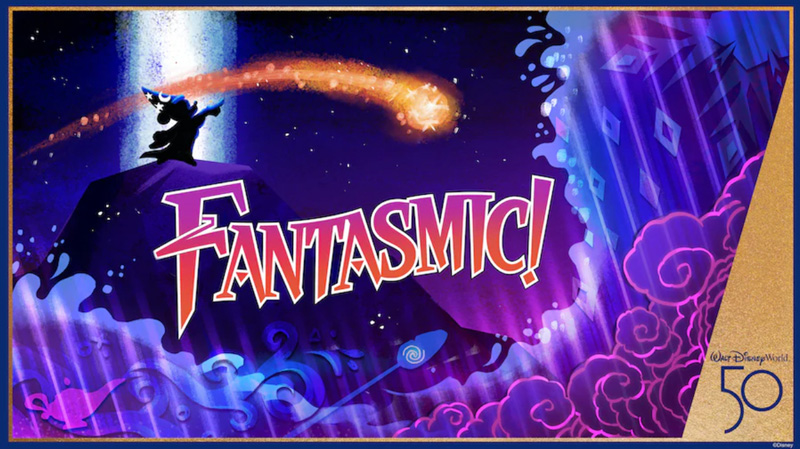 We don’t want to read too much into a vague teaser poster, but the inclusion of details from Aladdin, Moana, and Frozen seems deliberate and notable. With that said, it would be odd for a single scene featuring these disparate properties. But it’s probably not a single scene.

The part that’s being replaced is almost certainly the extended Pocahontas scene, which has a runtime of approximately 82 minutes (longer than the movie!). While that’s probably a slight exaggeration, the Pocahontas portion is lengthy—long enough for multiple replacement segments. 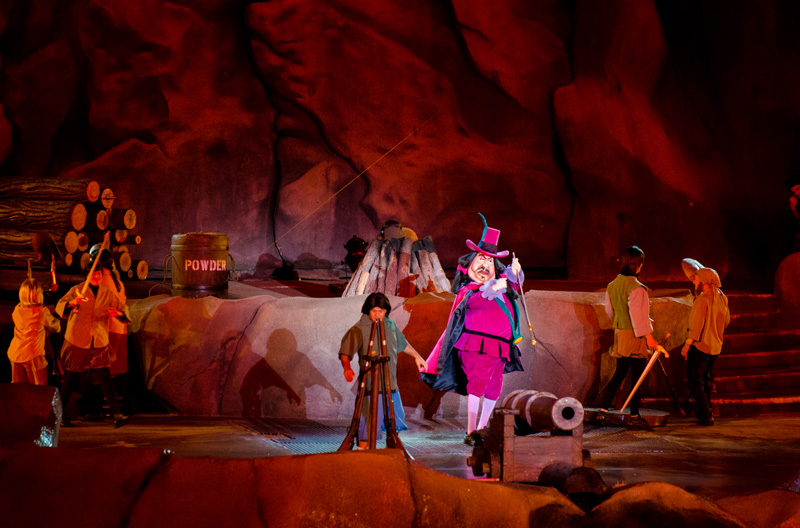 The Walt Disney World version of the nighttime spectacular has always felt inferior to Disneyland’s, and one big reason why is the Pocahontas part that drags and dates Florida’s Fantasmic. It would be like if this show debuted in the mid-aughts and still featured a lengthy scene based on Meet the Robinsons (sorry, fans of that—but it’s no classic) despite the promotional window for that film closing long ago.

One of my go-to “dad jokes” is calling the Disney’s Hollywood Studios version Pocahontasmic! I will happily retire that feeble attempt at humor once Fantasmic 2.0 debuts, especially if it means a better version of the show. What would be a really nice surprise is if Vazzana and co. also managed to convince the misers who hold the pursestrings to give us a new dragon. 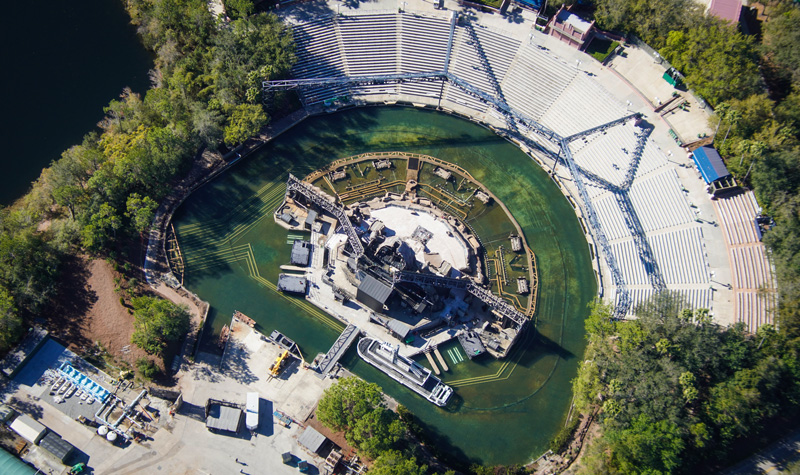 Back at the end of January, we had an optimistic development courtesy of aerial extraordinaire, @bioreconstruct. (Who has so generously allowed us to use his eye in the sky Fantasmic photos above and below–we highly recommend giving bioreconstruct a follow for interesting aerial images beyond these.)

The significant development for the purposes of Fantasmic’s potential reopening time frame is that the lagoon that surrounds the island stage in the Hollywood Hills Amphitheater has been refilled. This was huge news because the water had been drained since Spring 2020, and this marked the end of the refurbishment. Or so we thought. 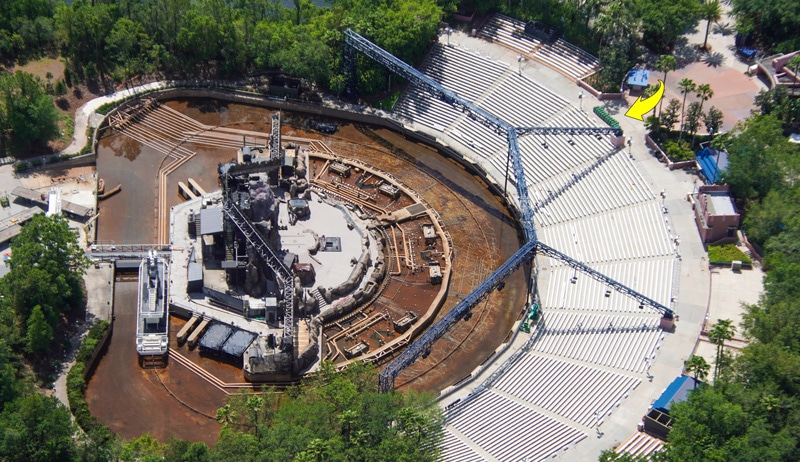 Casting began for Fantasmic and the show began preparing for its return. Then something went wrong.

We don’t know what happened, but the water was drained again. Rumors pointed to damaged show tech that was either caused by, or discovered after, the water was refilled. Regardless of the reason, work resumed on the venue for another couple of months.

At that time, we expressed skepticism that Fantasmic would return for the summer. We also noted that Fantasmic is incredibly important to crowd distribution at Disney’s Hollywood Studios, so every effort will be made to get it back as soon as possible. 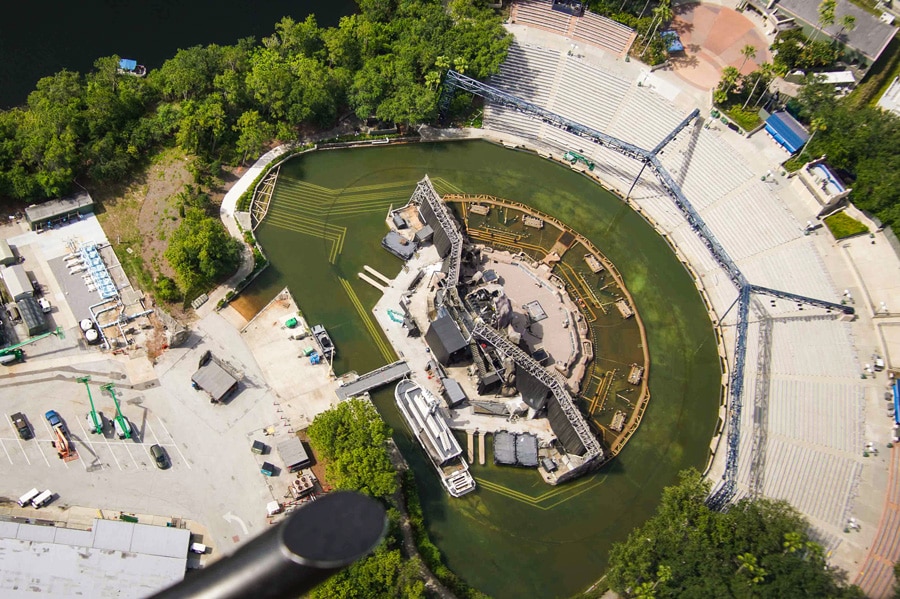 Above and below are aerial photos showing that not only has the water been refilled, but staging has started for the return of Fantasmic.

Trash cans have started to appear in the viewing sections and construction equipment has been mostly moved backstage (with the exception of one boom lift at the front left of the seating area to service show lighting). It looks like Fantasmic is almost ready to return! 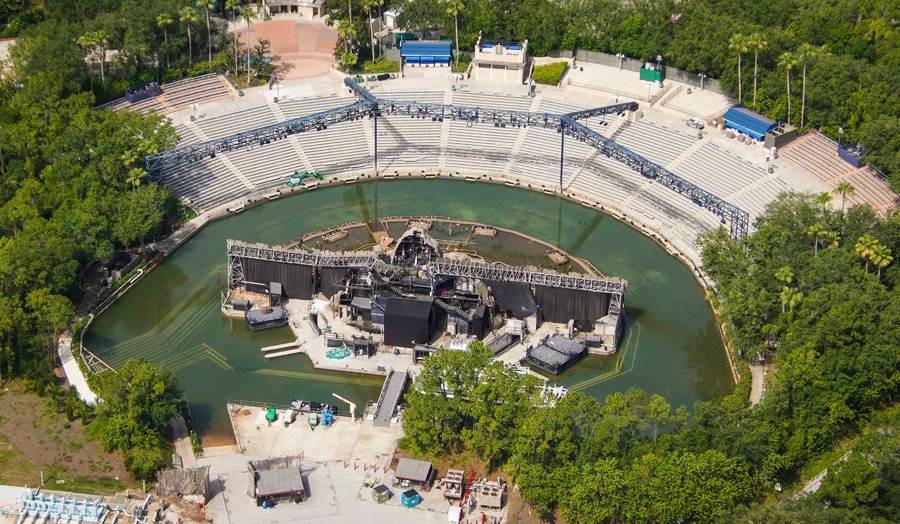 Ultimately, the official announcement from Walt Disney World that Fantasmic is in rehearsals bodes well. This means it’s likely 6-8 weeks from returning, and the company is reasonably confident that the return date won’t be derailed yet again.

At this point, it becomes a question of whether Walt Disney World will have it ready by late October 2022 or if it’ll drift into the holiday season with an early November debut. Fantasmic has already been delayed several times, and it’s always possible that it’s delayed again.

If that happens, it will not be a deliberate move by Disney. The company urgently wants the nighttime spectacular to return, as  Fantasmic would be hugely helpful to absorbing crowds. This is especially true given that Disney’s Hollywood Studios has issues with attendance distribution throughout the day and problems with people bouncing from DHS to Epcot for Harmonious. The return of Fantasmic would solve all of that. Regardless, we should know for sure really soon, as Walt Disney World will want to make an official announcement with sufficient lead-time to draw some bookings from the news.

What do you think about this prediction for when Fantasmic will return to Walt Disney World? What’s your anticipated or desired date? Think it’ll happen in mid-to-late October 2022? Or, will it be delayed longer, until Thanksgiving, Christmas…or even 2023? Are you actually disappointed by this, preferring to enjoy relatively uncrowded evenings at DHS? Do you agree or disagree with our predictions? Any questions we can help you answer? Hearing your feedback–even when you disagree with us–is both interesting to us and helpful to other readers, so please share your thoughts below in the comments!

73 Responses to “When Will Fantasmic Return to Disney World?”