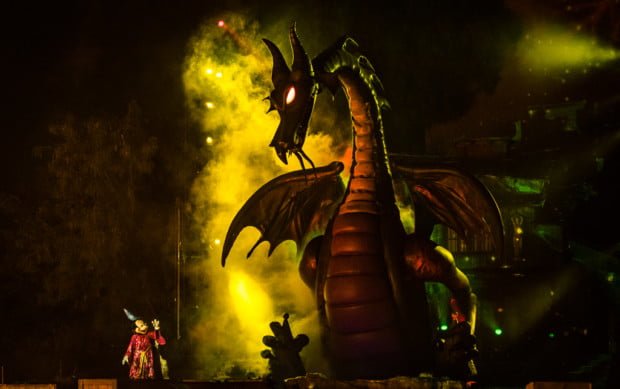 Disneyland’s Fantasmic is still the king. Let’s just get that out of the way up front. Anaheim had the best version of Fantasmic before, and Fantasmic 2.0 (I’ll call it that even if Disneyland does not) remains the best. Arguably, it’s the best nighttime spectacular at any Disney theme park in the world.

Hopefully that’s reassuring to the many Disneyland fans who worried that Disney would try to fix something that was not broken. While there was definitely some tinkering with the show that could be good or bad depending upon your perspective, the heart of Disneyland’s Fantamic remains, which is the most important part.

As for whether the changes are an improvement or downgrade, it depends. I’d say at worst, the reimagined Fantasmic is a lateral move. At best, it’s a solid refresh that should extend the life of a Disneyland classic by at least another decade…

My perspective is that Fantasmic is better than ever. Fantasmic 2.0 modernizes the show’s technology to create some beautiful, dream-like imagery and also retains the original’s best and most iconic scenes. It also has a few hiccups and changes that are not upgrades, but the improvements outweigh the issues.

For me, Fantasmic 2.0 is a net gain, and a show I’ll make a point of watching with regularity for years to come. With this returning to a Disneyland Resort nighttime spectacular lineup that also includes World of Color, Remember… Dreams Come True, and (soon) Paint the Night, the amount of evening awesomeness that can be had in Anaheim’s two parks is almost unfair. 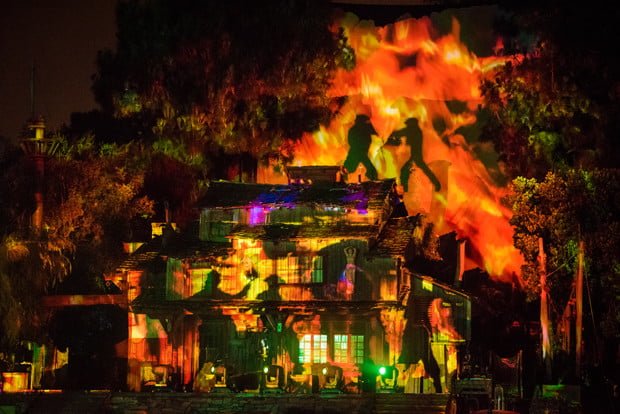 Let’s start with the good about Fantasmic 2.0. The technology has also been upgraded across the board, which makes for a more visually-impressive show. It seems like a lot of the tech upgrades follow lessons learned from Disneyland Forever and World of Color.

In the case of the former, you have more projections on Tom Sawyer Island, and although I’m not sure I’d call them projection mapping, they’re an unequivocal upgrade. This gives the show a lot more vibrance and enhances its impressionistic, dream-like qualities. 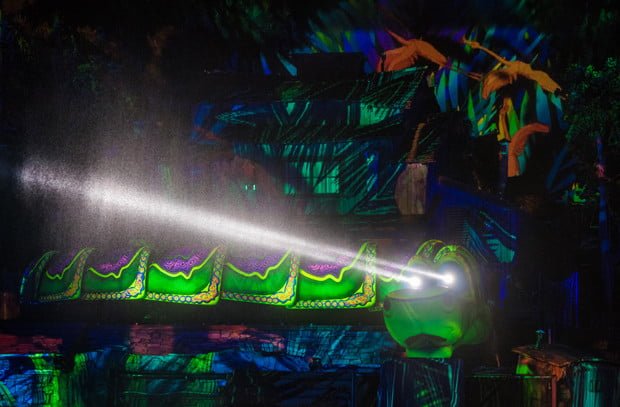 The projections on the mist screens are also much crisper, and feel as if they are better layered. This is no doubt the natural consequence of upgrading technology, but it’s a very welcome improvement.

As for the World of Color-esque upgrades, they’re interesting. Colored water fountains are laced throughout the show, and these are mostly superfluous to the action, but are nonetheless pretty. Since this show is a dream, I’d say “superfluous but pretty” makes them a perfect fit.

I appreciated that Disney did not go overboard with the fountains, leaving a clear distinction between Fantasmic and World of Color. The water jets enhance Fantasmic, but in no way are the focus of the show. 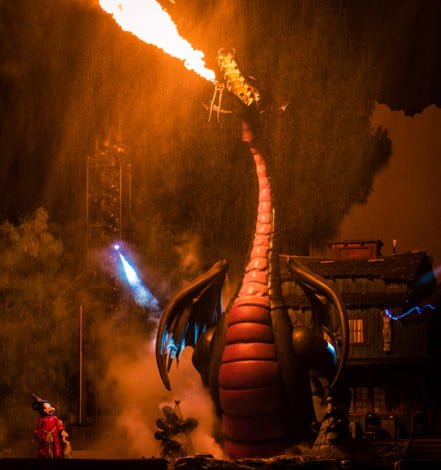 In other situations, new technology enhances the staged scenes. The best example of this is Mickey Mouse’s showdown with Murphy the Dragon. Mickey actually shoots some of his ‘magic’ at Murphy, and there’s a flurry of flashy visuals during the course of the scene. At the end, you actually see the death knell of the dragon, as it fires off a last bit of fire into the sky.

This was Fantasmic’s best scene before, and it’s even better in Fantasmic 2.0. 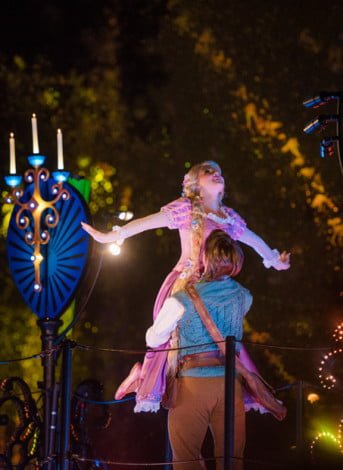 Prior to that, I feel the new films added were mostly done in an effective and seamless way. Tangled, in particular, struck me as a strong addition, and also feels like a better fit than Snow White on these barges.

The flying carpet scene is a nice change of pace, and I think this scene will be great once the effect works properly.

In other cases, the additions are more subtle, but work beautifully. It’s a short mist screen sequence, but I love the way that Mickey swimming shifts to Little Mermaid which flows into Finding Nemo which transitions into Pinocchio before going back to Mickey, this time as Sorcerer Mickey submerged in water. 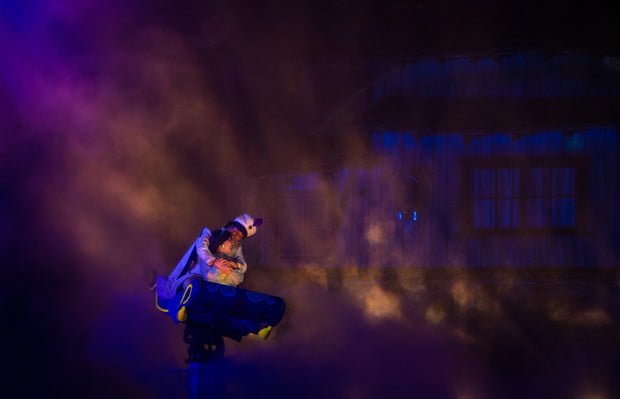 It’s hard to describe the seamlessness of this, but it’s perfect. It’s also the way dreams work, with fleeting sequences of one thing morphing into other, related things. This is one of the reasons I’ve always loved Disneyland’s Fantasmic: the ‘dream’ premise is perfect for a montage show like this.

It’s easy to buy into the narrative thread of Fantasmic because (I assume?) we’ve all had bizarre free form dreams that flow exactly how the show flows. One visual triggers a related one, and things just sort of go wherever from there. With one exception, Fantasmic still perfectly conveys the feeling of being inside Mickey’s dreams and nightmares. 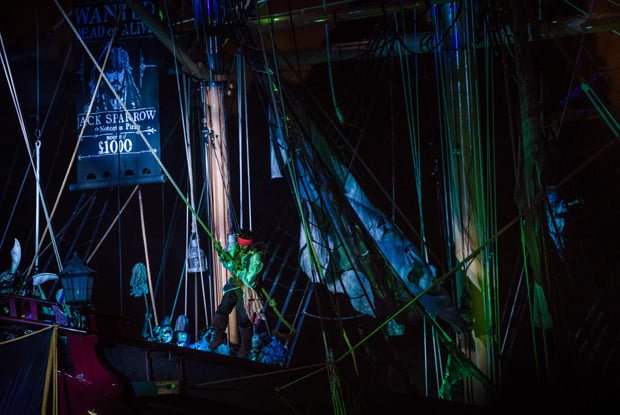 In talking with other Disneyland fans, it seems the two most “controversial” aspects of the reimagined Fantasmic are the music and the Pirates of the Caribbean battle scene.

With regard to music, I take no issue with the changes. The original fanfare and iconic theme song are still used, what’s changed is mostly different recordings in some places, and new pieces (from the films that are featured) weaved into the show.

The new elements of the soundtrack are perhaps a bit more pop influenced with a slightly more uptempo vibe, but this is far from anything like Paint the Night. If the aim was to keep the heart of the original soundtrack intact while also giving it a slightly more contemporary twist, I’d say it’s a success.

On that note, I also wonder if some fan qualms with this pertain to familiarity, and as people see the new show more and more, they will become more comfortable with the new music. 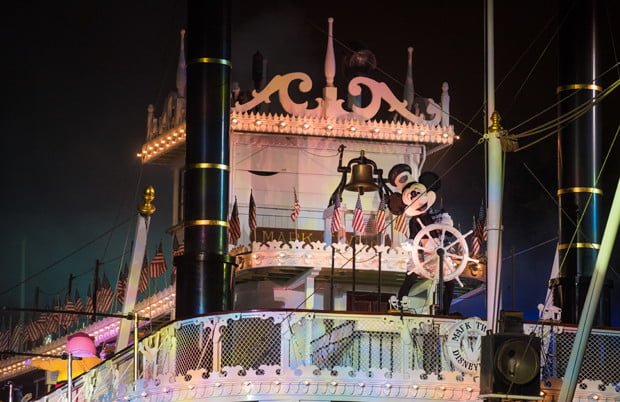 The Pirates of the Caribbean scene is a different story for me. Prior to seeing the reimagined Fantasmic, I was on board with this change, as rumors pointed to an impressive moving projection mapping technique being used to transform the Sailing Ship Columbia into the Black Pearl. Unfortunately, that rumor did not come to fruition–or at least has not, yet.

I’ll admit that I’m generally against the inclusion of live action movies alongside animated ones in these montage-centric nighttime spectaculars. In the absence of a good transition, the shift is jarring for the audience. I find this transition to be jarring as you go from serene underwater visuals and a subdued soundtrack to Captain Barbossa’s face and lightning. 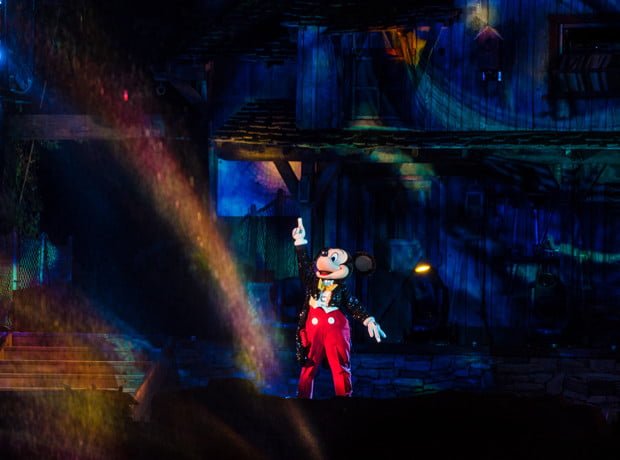 Now, I realize there’s nothing to say Mickey Mouse cannot be dreaming in animated imagery and then start dreaming in live imagery. I guess there’s also nothing to say that a change in tone of dreams cannot be abrupt. That still does not mean this is a good fit for the show, and flows well with the other dream sequences. It doesn’t.

Moreover, I don’t really see what’s gained by using Pirates of the Caribbean over Peter Pan. There is no wow-factor (like the Black Pearl projections) and the choreography of the action seems nearly identical. The only real differences are that it’s harder to follow the action since you can’t clearly identify the characters, you no longer have Tick-Tock Croc, and there’s a jarring transition. None of these things are changes for the better.

Without the Black Pearl projection mapping to offer wow-factor, what’s the point of this change? I don’t even think Disney can argue that it adds to the synergy of the show, as Pirates of the Caribbean: Dead Men Tell No Tales did not perform well at the U.S. box office. Generally, synergy does not extend to films that underperform–that’s why we don’t have John Carter, Tomorrowland, or the Lone Ranger tie-ins to…anything…at Disneyland. They realize Disneyland is located in California, not China, right?

Honestly, this Pirates segment reminds me of the interminably long scene during Pocahantasmic in Walt Disney World. There’s really no justification for its presence in 2017. 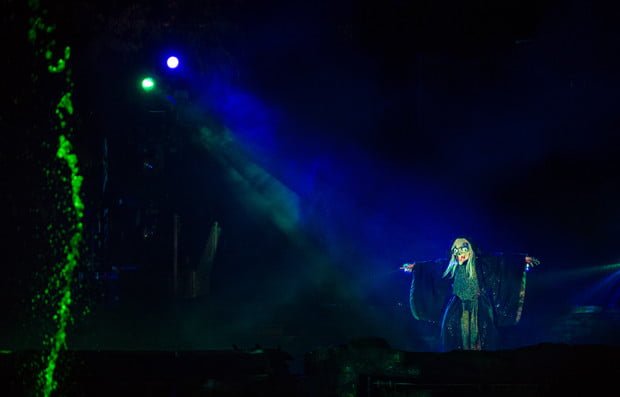 My other quibbles mostly pertain to smaller details, and I wonder whether these will be corrected via tweaks that will be made as testing and adjusting continues. First, the Evil Queen has no cauldron and does not transform into the Old Hag. Those were nice touches before.

Second, the night we saw Fantasmic 2.0, the rigging for the flying carpet was clearly visible, while the faces of Aladdin and Jasmine were mostly obscured by mist. I’ve seen photos from other nights when this was not an issue, though. Generally, it seemed like some mist/fog effects are not always appearing where they should, but this was the most glaring instance of that.

Finally, due to the new lighting, you can see Murphy the Dragon slowly rising. One of the wow-moments before was seeing human Maleficent growing in size, and then dramatically “transforming” into her dragon form when the lighting went out. The dragon visibly rising ruins the illusion and eliminates the inference that Maleficent transformed into a dragon.

These last few things seem like pretty easy fixes that should eventually be ironed out. From the sounds of it, Fantasmic 2.0 was rushed to debut, so it wouldn’t surprise me if the show is still a work in progress. I hope part of that extends to the Black Pearl, but I’m not holding my breath there. 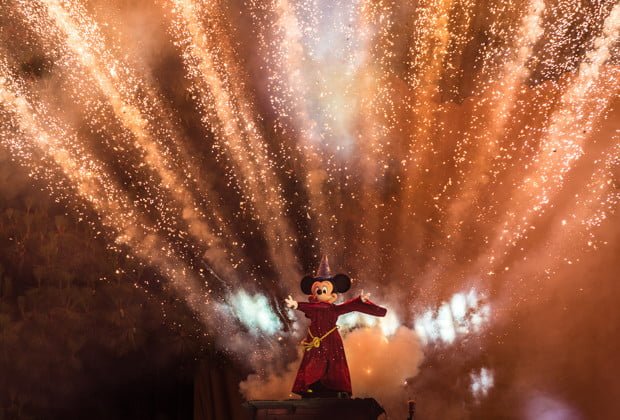 Overall, Fantasmic is still the excellent show that Disneyland fans have come to love since its debut in 1992. This represents the most significant refreshing of Fantasmic that has ever been made, and it’s a refresh that is mostly for the better. Most of the best scenes are still there, and have been enhanced. Only one iconic scene has been downgraded, and even that’s a (mostly) lateral move. Other minor quibbles can be made, but those are little things that (hopefully) can be tweaked. Given that Disneyland’s Fantasmic was pretty much perfect before, it’s pretty impressive that Disneyland managed to improve the show.

One last thing–if you’re looking for strategy, I’ll be back with an update to our Best Fantasmic Viewing Spots & Tips post next week after we have a chance to see it a couple more times. I’ll also (hopefully) have more photos; since this was our first time seeing the new version, I didn’t want to see the entire thing through the viewfinder.

Have you seen Fantasmic 2.0? What did you think of the show? Better or worse than the original Fantasmic? Any particular scenes you thought were highlights or lowlights? Any questions about Fantasmic at Disneyland? Share any questions, tips, or additional thoughts you have in the comments!