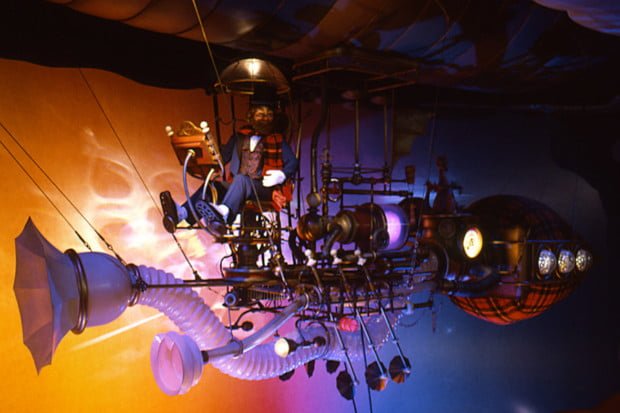 The opening act of the original Journey into Imagination was unlike anything I’ve ever experienced. Shortly after boarding your omnimover ride vehicle, you entered the clouds. There, guests spotted the silhouette of an eclectic blimp-like machine with a vacuum on the front and bagpipe on the rear. We were greeted by the affable voice of a jovial professor-like character: “Oh, hello there. So glad you could come along. I am the Dreamfinder. Ah, ha, ha, ha.”

So began the long, strange trip of Journey into Imagination. An attraction with mesmerizing and quirky qualities that endeared it to many guests (like me) who still remember it fondly today. As you flew alongside Dreamfinder, the sky passed by behind, and the Dreamcatcher caught sparks of imagination. Dreamfinder introduced you to the journey, one that would take guests around the universe filling the Idea Bag (that bagpipe-thing).

This Flight to Imagination was a prolonged scene, and had time to establish itself before making its big reveal: Figment, the character who would become the star of the attraction. With Dreamfinder giving him a dash of “childish delight,” he was perceived as inquisitive and lovable within his first 10 seconds of ride time–something that the current version fails to establish at all.

From there, Figment and Dreamfinder filled the Idea Bag, encouraged guests to follow them to the DreamPort, and sang the first verses of that song we all know and love. In this 2+ minute scene, the Imagineers had managed to pack more of an emotional punch than many other rides do in their entirety–and the experience was just getting started… 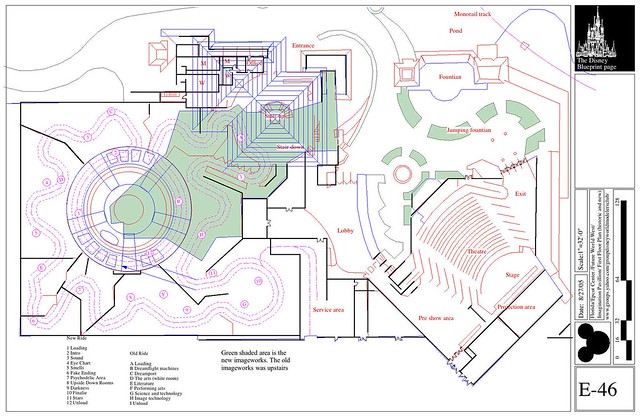 Here’s an overview of the current Imagination pavilion by Ed on Flickr, with the original track also shown. In this blog post, you can see a clearer view of track plans that show just how large this turn-table scene was in the context of the ride (and how now, it’s not even used).

If crowd-sourcing photos wasn’t quite lazy enough for content creation, don’t worry–we get even lazier with some embedded tweets…

The first of these is a blueprints for what amounts to a cross-section of the turn-table theater containing the Dreamcatcher and ride vehicle.

A genius figured it all out. pic.twitter.com/l9YyFNFeC4

These come from a slew of tweets yesterday by legendary Imagineer Tom Morris. If you don’t recognize that name, you should. Most recently, Tom Morris had a significant role in making the design of Cars Land “work.” Before that, he was show producer for Hong Kong Disneyland, a lovely little park with the initial build done on a tight budget. On the other end of the spectrum, he was show producer of Disneyland Paris’ Fantasyland and Le ChÃ¢teau de la Belle au Bois Dormant, both of which had a whimsical and charming yet lavish design that followed John Hammond’s mantra of sparring no expense.

Those are his most notable (to my knowledge) projects, and all have been well-received by fans. I guess he also worked on the Walt Disney Studios Park, but we’ll give him a pass on that one since I’m told the budget for the entire park was $378.

As you can see, he also worked on construction of the original Journey into Imagination at EPCOT Center. That plus the slew of other successes bestows ‘legend’ status on him in my mind, even if Disney has not officially conferred the same on him, yet.

Another turntable structure shot. Steel in foreground is moving partition wall. Clouds were attached to this. pic.twitter.com/v2FwCRguCz

Hopefully you can use the first photo and blueprints above to contextualize this photo. If you look at the track plans, you’ll note separators in the “Flight to Imagination” scene. This is because there were five identical Dreamcatcher scenes to start the original Journey into Imagination.

Upon entering this scene, the ride vehicle attached itself to the turn-table, with one-fifth of the show scene visible. Both the Dreamcatcher blimp and ride vehicles then moved at the same speed, which allowed for a prolonged, 2+ minute opening scene that was constantly moving yet appeared to be static (in some regards), but without backing up the attraction.

Ah, the holiest of holies, the turntable platform! Anyone know if it’s still under there? pic.twitter.com/XPLo27LreQ

Depending upon who you ask, the original Flight to Imagination turntable was removed (albeit not necessarily physically removed) from the attraction’s show scenes because it was unreliable or had slowly driven itself into the ground. My guess is that “maintenance costs” are the real reason, with everything else being subterfuge.

Rumors persist (mostly from Cast Members who have worked the attraction) that at least remnants of the turn-table are still down there, but I guess we won’t know for sure until the rip-up the current flooring and redo this attraction in a manner befitting of the original.

Really cool construction photo showing progress on one of the original Dreamcatcher blimps. I’m not sure if it’s officially called the Dreamcatcher–the attraction never called it that–but that has become the de facto name via usage over the years.

It is really a shame that the entire turn-table scene was simply eliminated from Journey into Imagination because it had issues. The scene was incredibly ambitious and captivating, and should have been fixed or replaced with a comparable, workable solution. There has been a disturbing trend at Walt Disney World of forgoing complex effects and components for the path of least resistance, which is regrettable. Disney is a creative company: throwing in the towel for a simpler solution should not be an option.

Do you remember the original Flight to Imagination scene with Dreamfinder piloting the Dreamcatcher? What did you think of this experience? Do you wish Disney would restore it to its former glory? Share your thoughts or questions in the comments!

6 Responses to “#FigmentFriday: The Flight to Imagination”