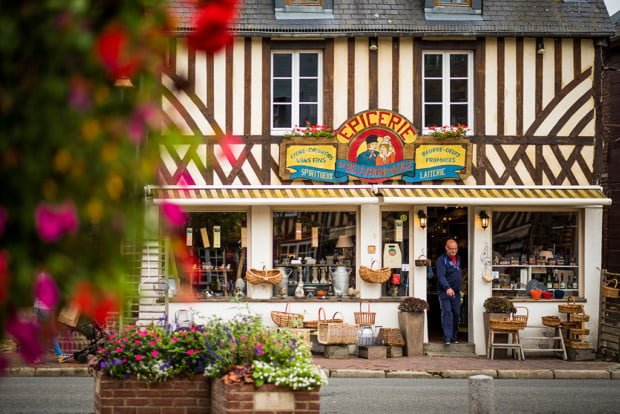 I was tipped off to the spot by fellow EPCOT Center super fan, Brian Miles (who had visited it). Outside of EPCOT Centrists, I doubt Beuvron-en-Auge is exactly a tourist hotspot. In the 1970s, it went through a historical restoration aimed at recapturing its traditional heritage, and was subsequently named “Les Plus Beaux Villages de France” (or The Most Beautiful Villages of France), a title granted to 152 villages across France. Now, it’s part of the Normandy Cider Route; when we visited on a weekend, the village was quiet.

Suffice to say, it’s not exactly Rothenburg (a place we also visited), or one of the well-known spots that exemplify European old world charm and to which tourists flock based upon that reputation. This is not to say Beuvron-en-Auge was not worthy of our time–it’s just set-up for the scene that unfolded as we wandered the streets…

When we arrived, it was immediately clear that this was a time capsule in more or less the same condition as depicted in Impressions de France, virtually unchanged since at least the late 1970s. If you swap out the flower cart in the film for some modern cars, it looks identical. We all went pretty crazy for this, and were really impressed with how much personality the intimate village had. 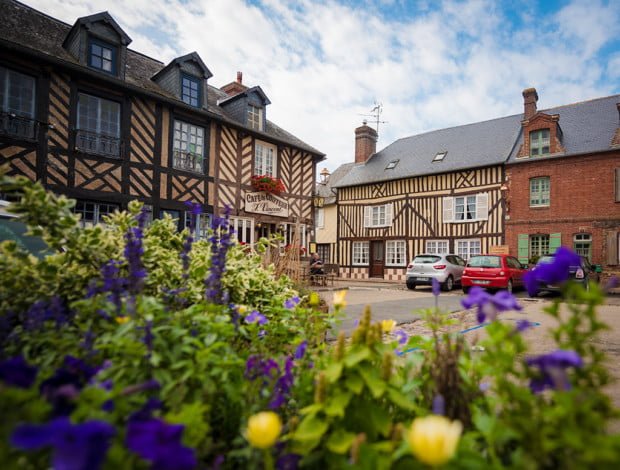 This sense of excitement would’ve (maybe?) fit in were we in one of those more touristy places, but Beuvron-en-Auge is not one of those places. Instead, the three of us are racing around bursting with enthusiasm, taking photos non-stop of a somewhat normal village. 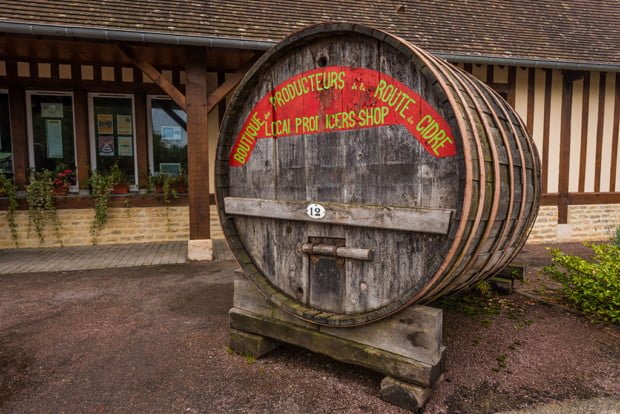 They say it’s easy to spot tourists, and in this case, we stuck out more than if we were wearing American flag fanny packs and Reagan Velociraptor shirts. 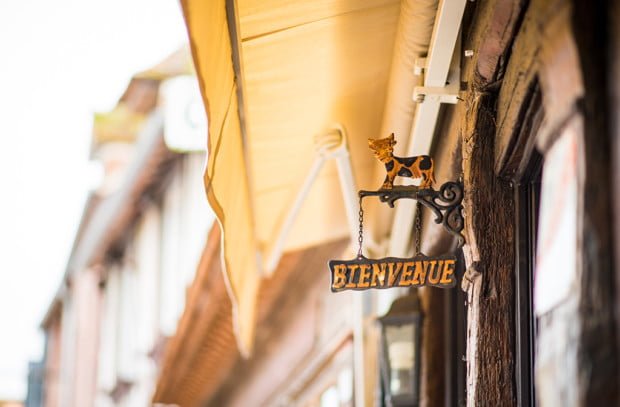 Still, I’d like to think I’m also fairly self-aware about that fact, and I immediately felt the puzzled glances of locals. Those looks of bemusement as we went nuts taking ‘artsy’ photos of random businesses only was amplified as we stuck around longer. They probably thought we were insane…

Honestly, though, if unleashing the Kardashians upon the world did not already taint our nation in the eyes of the French, I doubt a few weirdos taking photos of buildings had much of an impact. 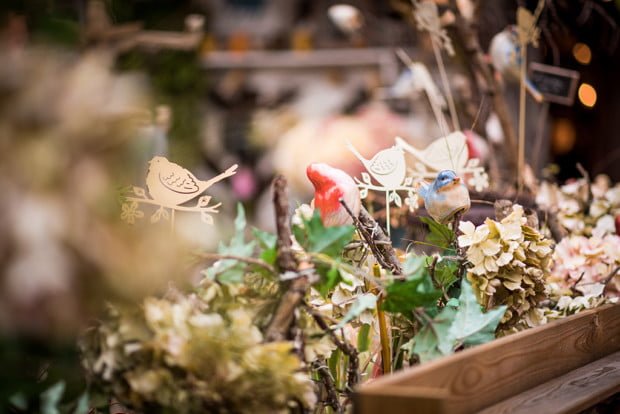 My memory of Impressions de France is pretty strong, and I was pretty sure that one of the main buildings from this scene in the film still had the same sign as it did in the circa-1982 film. 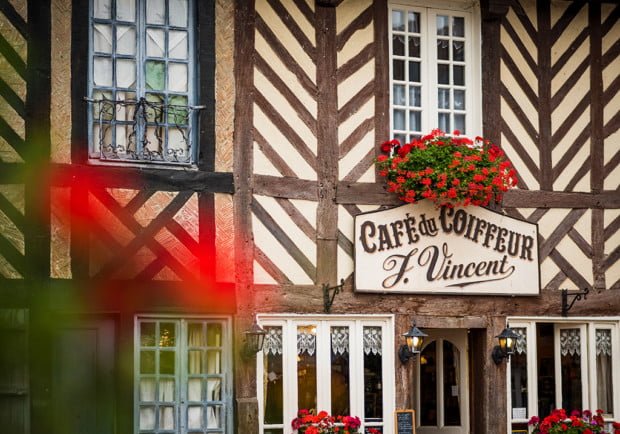 As we stood there, I started going back through photos on my camera from the visit to Walt Disney World a couple of days earlier for reference…because who doesn’t take photos of a World Showcase film?! Sure enough, it was (look between the heads of the women pulling the flower cart): 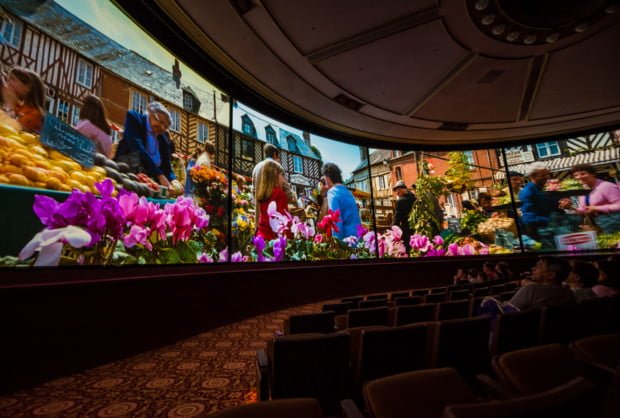 From this point on, we became fixated on Café du Coiffeur, trying to capture good photos of it despite cars being in the way. Well, there was a man sitting out front of the cafe and bar, and he most definitely noticed us. 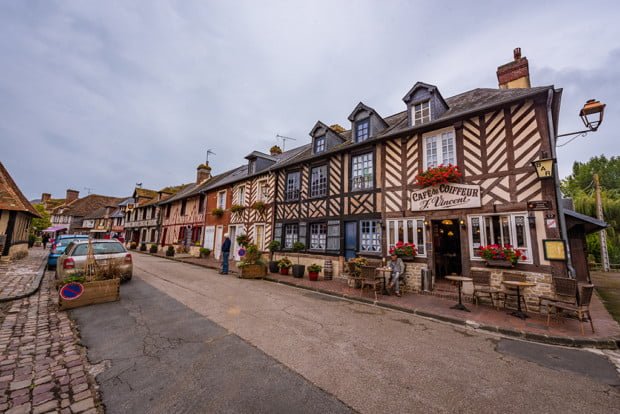 The way we were going about these photos–crouching behind flower planters and peaking around the corner of other buildings–in an effort to obscure modern cars in the foreground, he probably thought we were some bizarre, pseudo-paparazzi types who were trying to photograph him. (No sir, we are just weird Disney fans. Do you not encounter our type with regularity?!) 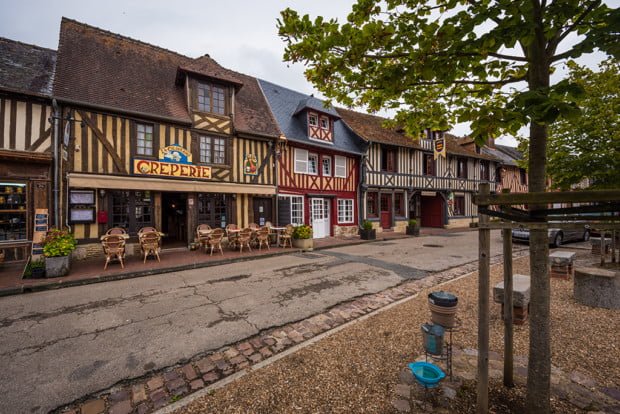 Frankly, I’m not sure why we became so fixated on that one building. I’d hazard a guess that the majority of businesses in town still had the same signage as they did in the 1970s…that was just the one that looked familiar.

Regardless, after several minutes of doing this, and just generally running around the village taking photos of its charming facades, we decided to stop for crepes at a La Colomb-auge Creperie.

There, we sat outside, and after a few minutes, an English couple and their large dogs sat at the table next to us. Sarah, on the first of two occasions that day, struck up a ‘conversation’ with one of the dogs. 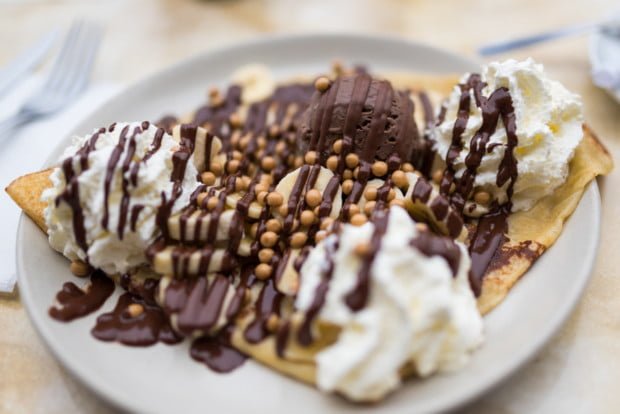 I love the French mentality towards food, particularly the “dessert whenever…or for an entire meal” philosophy. 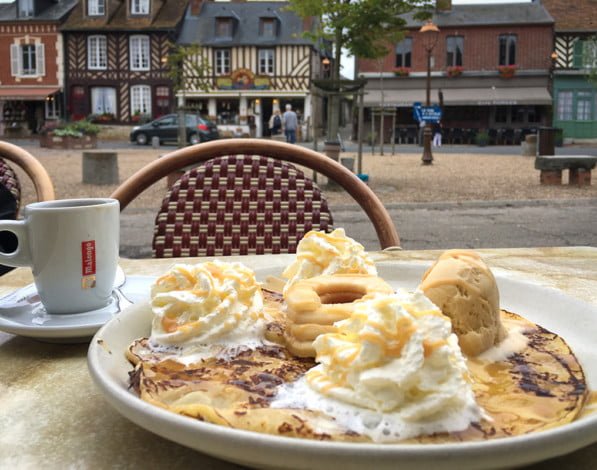 This led to us talking with the pair of humans, who shared a wealth of information about Normandy and other locations we’d be visiting in Europe. They and their dogs were incredibly friendly, and one of the joys of traveling is always interacting with others, so that made for a fun experience. 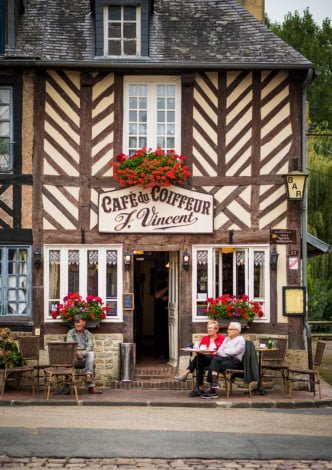 After eating, our interest gravitated back to Cafe du Coiffeur, where the same man (left, above) was still seated outside, imbibing. Some cars had left, so we started taking the same sort of photos again. (Mark was even more dedicated to the cause (read: creepier) than me, so maybe he can share a better photo of the front of the cafe sans vehicles…) Shortly after this began, another group arrived at the cafe, and the man got up and left. 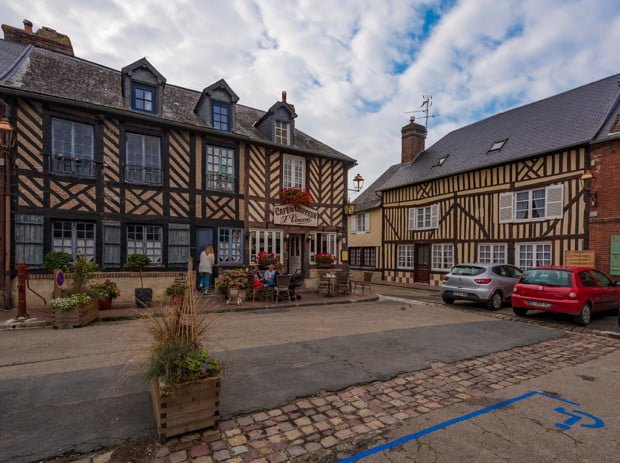 When I imagine what was going through his head, I chuckle. Did he think we thought he was some French celebrity, attempting a weekend getaway to the anonymity of Beuvron-en-Auge? Was he drunk to the point that he later questioned whether he witnessed our strange behavior at all, or simply hallucinated it? Does he have a new impression of American tourists as being naturally fixated on him? Does he now fancy himself as ‘the French Brad Pitt’? Was he flattered by the attention? Annoyed? Sadly, we will never know the answers to these questions. 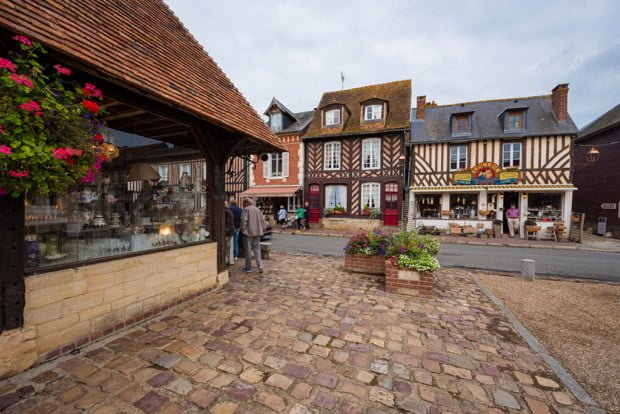 My initial opinion of Beuvron-en-Auge was a strong one, and I really pleased that we stopped here for a few hours. Even independent of Impressions de France, it had a certain historic charm and authentic character (as opposed to the touristy quaint towns that might be putting on a dog and pony show because that’s their main draw) that made it a lovely place to visit.

In retrospect after completing the entire trip, I would not rank Beuvron-en-Auge among the highlights. We ended up stopping in several villages like this, and while Beuvron-en-Auge still has a lot of personal appeal due to the Epcot connection, I couldn’t recommend it to the average, non-Epcot obsessed tourist over some of the other places we visited.

Personally, I’m really glad we did it. I would likewise recommend it to other Impressions de France fans (particularly because it’s a convenient stop), but I would not recommend casual tourists go out of their way to see it. I know this was a lot of unexciting detail about a stop I’m only recommending tepidly. But hey, you’re the ones who wanted detailed reports. I’m only following the mandate of the people! I promise the next installments will be ‘sexier’ and more thrilling…perhaps we will fight off a pack of French laser-sharks in the next post! 😉

Does Beuvron-en-Auge look cool to you? Have you ever been? Is it a place that you could envision yourself stopping to slow down and explore for an afternoon, or do you think it’d be a waste of limited travel time? Anything else you want to know about our trip to France? We love hearing from readers, so please share any other thoughts or questions you have, in the comments!