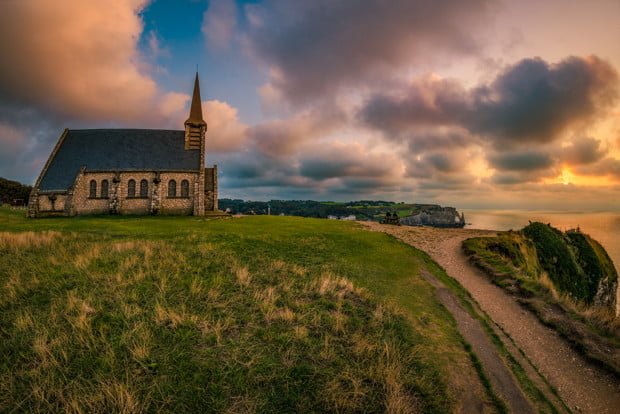 Ã‰tretat is the next stop on our Impressions de France-inspired tour and I promise this will be much more exciting marginally less likely to put you to sleep than the EPCOT Centrist geekery of Part 2 of the Trip Report, where we nerded out over a random sign, and creeped out the locals.

Anyway…Ã‰tretat. With 3 different glimpses at Ã‰tretat during the course of Impressions de France, I believe it receives more screen time than even the Eiffel Tower. We were a little unsure of what to expect from Ã‰tretat; we knew the white chalk cliffs and natural arches would be pretty, but didn’t know much beyond that.

We drove here directly from Beuvron-en-Auge, which was about halfway between Ã‰tretat and Mont Saint Michel. We booked at Hotel Dormy House, an oceanside hotel that looked like it had some character and was rated highly online. This hotel was one of the unanimous favorites of the trip: great location perched above the city near the white cliffs, one of the best breakfast buffet selections, and a style reminiscent of grandma’s house. I’ve used the word a lot, but a very charming place.

After checking in, we went behind Hotel Dormy House to survey the view and determine where we should go for sunset. We spotted the Chapelle Notre-Dame de la Garde in the distance, and decided that was our best option. It was only a few minutes away (but as lazy Americans, we felt the need to drive that distance), so we were there in no time. 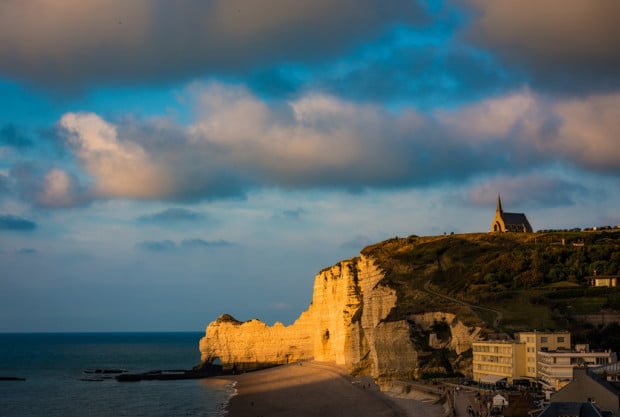 At this point, sunset was still ~45 minutes away, but the sun was beautifully illuminating the puffy clouds overhead and the sky was looking incredible. As Mark and I were setting up our tripods, Sarah walked to the front of the chapel for a view of the sunset overlooking the ocean. Next to Mark and I, there was a stereotypical looking French artist type, and he began yelling at a man in front of us.

I don’t know what he said, but he was right. The man had meandered directly in front of us despite seeing the cameras set up, and was moving with no purpose whatsoever. This happens all the time in Disneyland and Walt Disney World, often late in the evening when no one else is around and the lone stray person in question is playing on their phone. Unfortunately, American norms preclude shouting at people as a viable solution. The French, apparently, are far less tolerant in this regard.

After the man moved, the French photographer fired off his shots, and then took his camera off the tripod. He turned to me, showed me the images and said something I did not understand before walking off. This was all still a good 30 minutes before sunset. Mark and I were perplexed at first; while the light was really good at this point, how did he know it wouldn’t get better? As time passed and the sky went downhill, we began thinking maybe this dude was a sunset-savant. Below is my photo taken at about the same time as the angry French photographer:

Wanting some alternate views, I decided to run off to the side of the chapel to grab some more photos. From there, I saw Sarah talking to someone who had brought her dogs out to run around. Sarah has an affability to her that seems to invite conversation (which is pretty much the exact opposite of me), making this is a fairly regular occurrence. I thus didn’t think much of it.

It was starting to get darker at this point, and Sarah and I had previously discussed recreating this scene from Impressions de France: 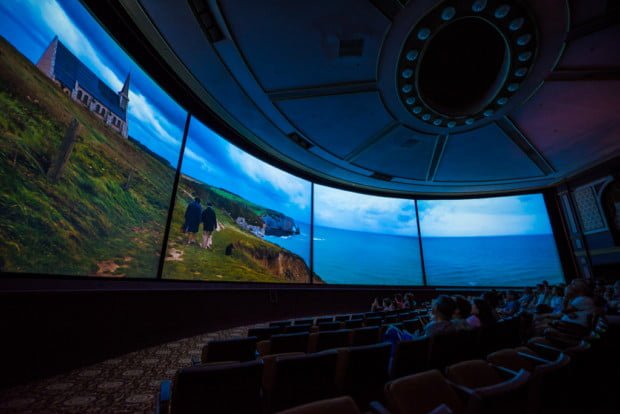 This had always struck me as a “life goals” kind of thing; I could picture us growing old and walking along the oceanside with our dachshund (well, maybe a husky by then). Even though we didn’t bring a dog for the trip, I thought the photo-mimicry would still translate. Then it dawned on me: Sarah’s new friend had dogs!

We asked Mark to take the photo, and asked the lady if we could borrow one of her dogs for the photo. We explained that we were recreating a scene from a film, and she obliged. This is the result: 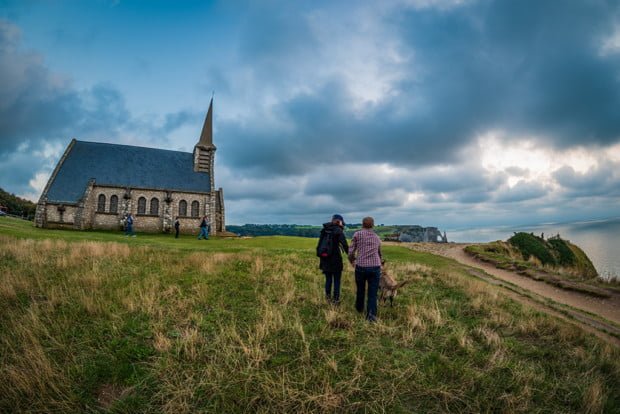 This request got me roped into the conversation with Sarah’s new friend, who it turned out operated a bed & breakfast near the chapel. I’m not really sure what happened, but we were suddenly walking with her to her house to see her cats and have drinks. Sarah and her seemed like best friends at this point, so I guess I assumed this was normal? I don’t know. After giving us a tour of her house, she started talking about having her daughter take us to a museum in Paris and a friend who operated a taxi drive us around.

At this point, I really had no clue what was going on, and was ready to get out of there. Unfortunately, this lady was really chatty, and there were no gaps to ‘excuse ourselves.’ Although the veil of the internet can conceal this to an extent, I’m normally terrible at socializing with people I don’t know. My max for a conversation with a stranger is about 2 minutes before things break down to us awkwardly looking at each other and discussing the weather. I also realized that in the confusion, we hadn’t told Mark what we were doing. He probably thought we had been abducted by this point.

We finally found a gap in the conversation to break free, and walked back to the chapel where Mark was waiting in the car. I wonder if he felt like the parent who should sit his kids down and tell them about “stranger danger.”

Anyway, from there we headed downtown to park and find a place to eat. 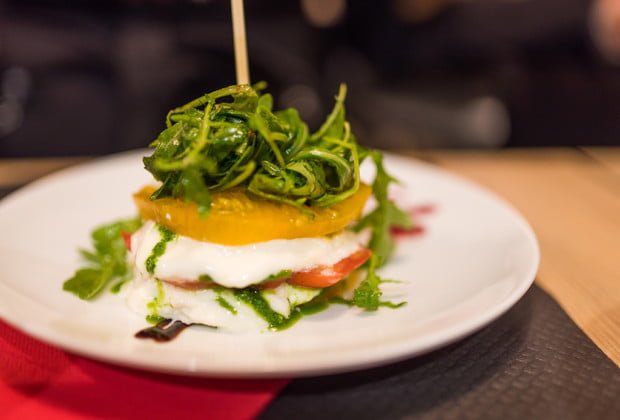 I don’t remember the name of the place where we ate or the precise names of the dishes, but it was one of the best meals of the trip. 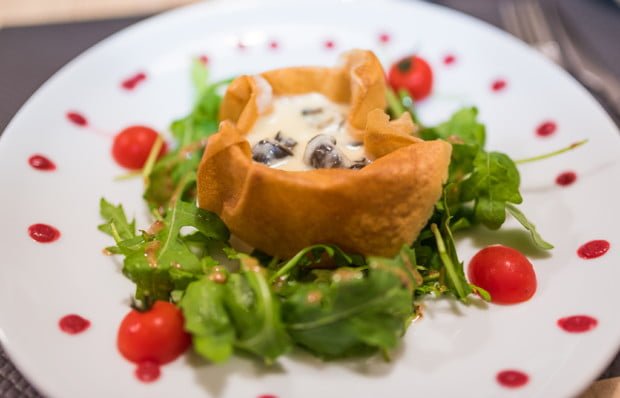 This was not a ‘foodie’ focused trip, so often we focused on value for money (particularly in Switzerland, where everything is expensive) over quality. 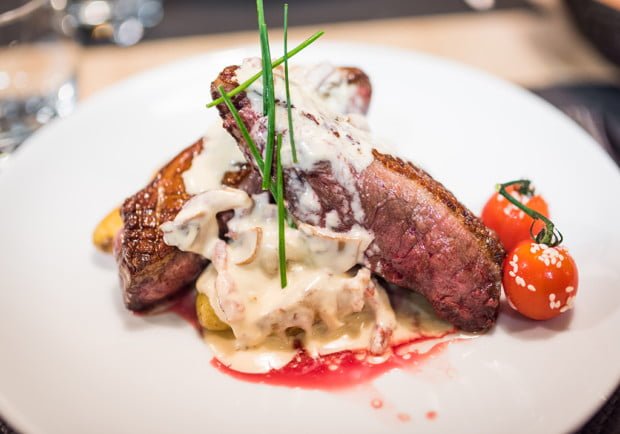 That meant a lot of fast food and quick meals from markets rather than a lot of multi-course sit-down meals. 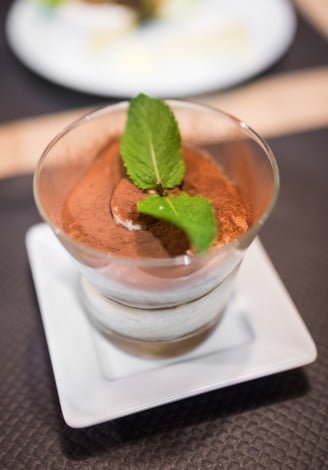 We did eat more nice meals in France than anywhere else, and of those, this was a highlight. 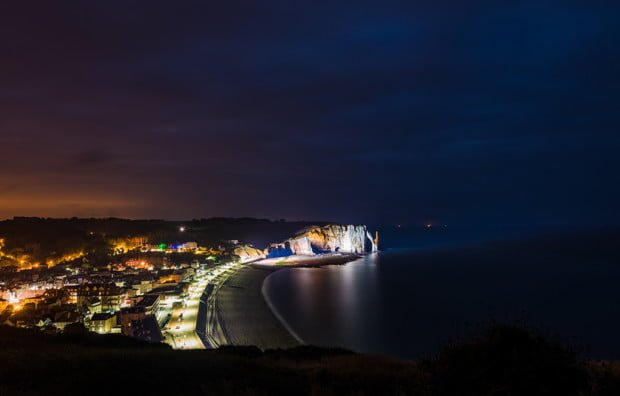 The next morning, Mark and I got up early for sunrise. We started by going back to the chapel to see if we could capture the full moon over the “needle.” Unfortunately, it was too overcast for the moon to appear.

Then it was back to our hotel, where we hiked up to the other side of the needle to a little cove above it. At first, it appeared that the sunrise was going to be a total dud. Official sunrise time came and went, with only an overcast sky and zero color. 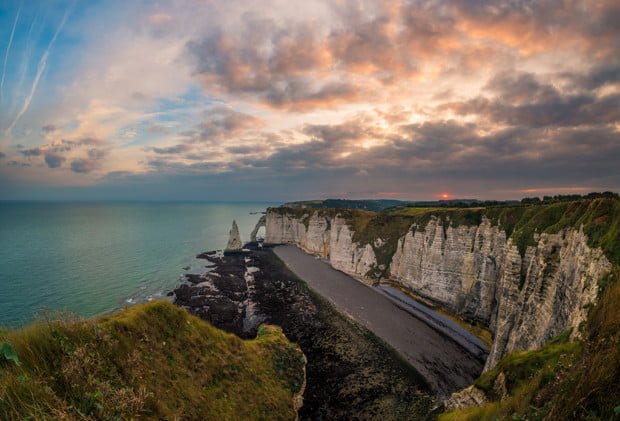 However, for maybe a 90 second window, the sun peaked through a sliver in the clouds, and totally lit up the sky. As soon as it rose above that cloud-gap, the pretty sky totally disappeared again. It was almost like a light switch was flipped, and then flipped back off.

We ended up really liking Ã‰tretat. Sarah loved it, and envisioned the sleepy oceanside town as a place we could live. This is not uncommon with us–a recurring conversation we have is living abroad a while, and we’ve dreamt of living in places like Paris or Kyoto (my top picks) temporarily for a few months to get to know these cities. It’s a dream that–at this point–will probably never happen, but it’s fun to think about the possibilities, nonetheless.

Ã‰tretat reminded both of us a lot of the towns we love along Pacific Coast Highway if you drive a couple of hours north or south from Los Angeles. In addition to the natural beauty, it had a nice, walkable downtown with nice storefronts and a small-town ‘retreat’ vibe to it. The cliffs and arches are the obvious draws, but the coastal trails and downtown made it a solid pick for a day trip. 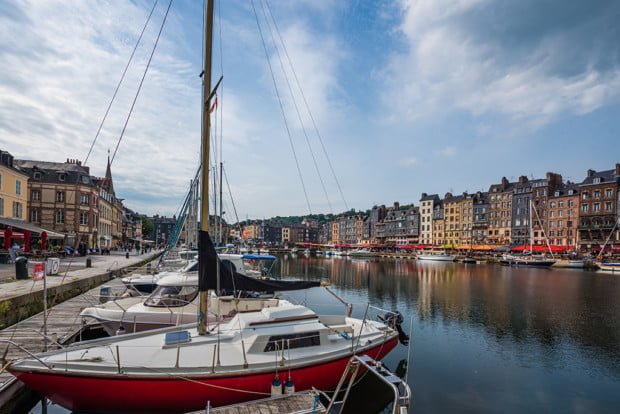 I won’t fixate on them since neither are Impressions de France locations, but after checking out of Hotel Dormy House, we headed to Honfleur. This spot had been recommended to us by the English couple in Beuvron-en-Auge, and we’re really glad we went. This port town had a picturesque harbor (literally, it was a popular subject for Monet and other famed French artists to paint) and myriad little shops, bakeries, and places to explore. Another spot we really liked, and could have spent much more time. 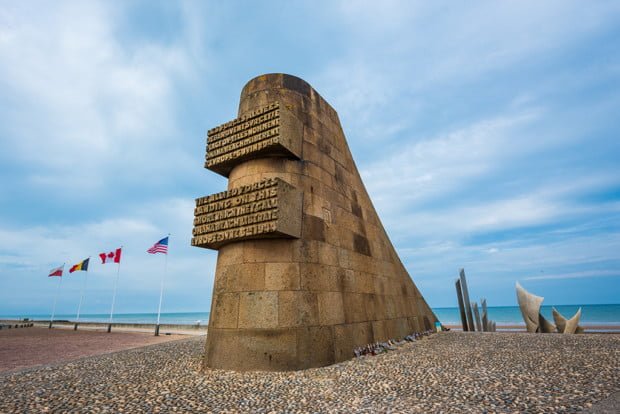 From there, we made an impromptu visit to Omaha Beach, and the Normandy American Cemetery and Memorial. Omaha Beach was fascinating and odd–particularly in the stark juxtaposition between the bleak mental imagery the beach conjured as compared to the lively (active) that we saw. 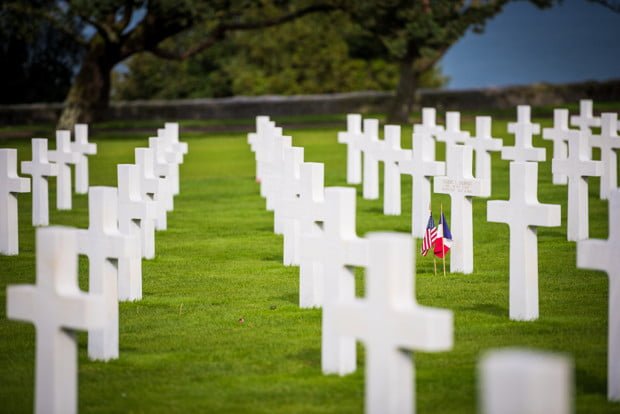 The Memorial & Cemetery, on the other hand, was a completely somber and powerfully moving experience. Obviously, we’ve read about World War II, seen documentaries and Hollywood depictions of what occurred in Normandy, but nothing can prepare you for being there and seeing the vastness of the cemetery. World War II is a common topic of discussion during our travels in Europe, and this further put the impact of the war and the loss of life that resulted from it.

We’d highly recommend all of the locations discussed in this installment of the trip report. From here, we were on our way to Paris, and we pick up there in Part 4 of our Impressions de Bricker Trip Report!

Oh, and as promised… 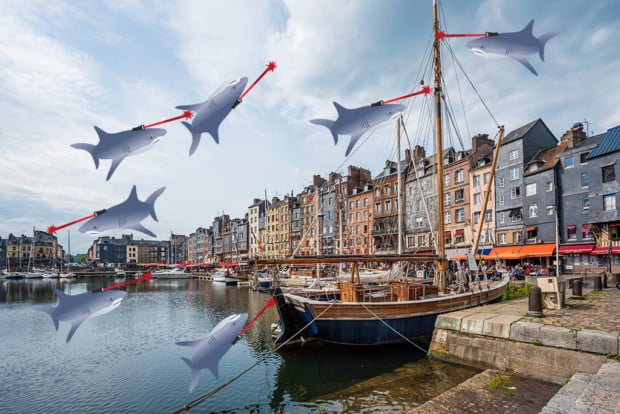 Does Ã‰tretat (or the other destinations here) look interesting? Do Sarah and I need a lesson on stranger danger? Thoughts on our Impressions de France tour? We’d love hearing some feedback on the report thus far (from those of you who are still reading…), so please share any other thoughts or questions you have, in the comments!