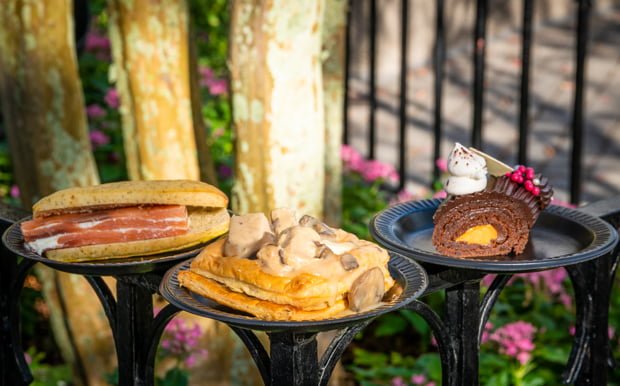 World Showcase’s France pavilion is our next stop at the Epcot Festival of the Holidays for the Le March de Noel food booth. In this review, we’ll share photos of the snacks and desserts on the menu, and offer our food reviews & tasting notes of French twists on American holiday favorites.

As with the booths in Italy and Mexico, if you follow Epcot festivals, you probably have a vague idea of what you’re going to find, at least in terms of quality, at France’s booth before even reading this review. For every festival that we’ve covered over the course of the last several years, there has been a booth in France.

Those booths have consistently been among the best of the bunch, “scoring” in the top 5 if we were to rank them. I think there might have been one festival 4 or 5 years ago where France underwhelmed, but that’s a distant memory. As with its namesake country, France’s Holiday Kitchen delivers the culinary goods.

Translated from French, the le Marche de Noel booth name simply means ‘Christmas Market,’ which is straightforward enough. Epcot’s festival team got a bit overzealous with some of the other names, which are neat deep cuts in some cases (Shi-Wasu in Japan) and perplexing head-scratchers (where’s the Tuscan food in Italy?) 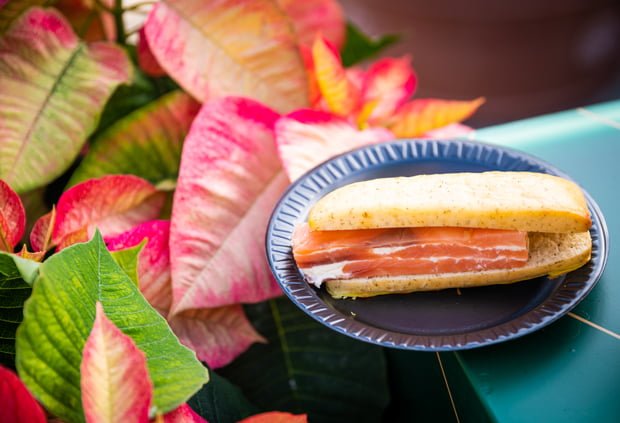 Smoked Salmon Napoleon – Despite it being on offer in France, I had low expectations for this. I was expecting a sort of pre-made Napoleon sitting around in a cooler all day, with something from the grocer’s grab and go aisle.

Fortunately, that’s not the case with the smoked salmon Napoleon. The dill brioche is soft, semi-sweet, and has an unexpected lightness to it. It nevertheless holds together the smoked salmon, which is sizable and balanced nicely with creamy goat cheese. A solid dish, and especially great for warmer afternoons during Festival of the Holidays. 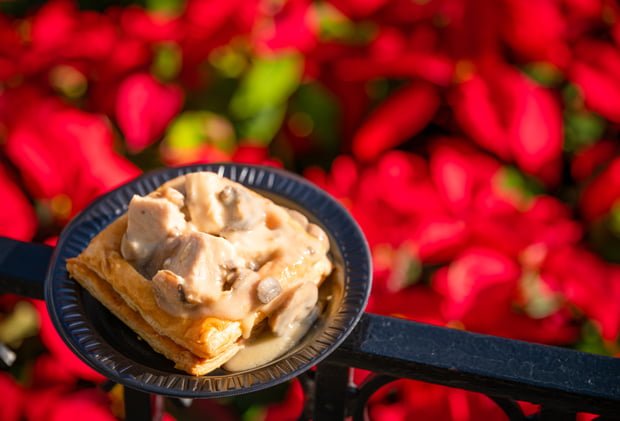 Turkey and Mushroom Puff Pastry – This is about the opposite of the Salmon Napoleon, at least in terms of when you’re going to want to enjoy it. This is a hearty dish with thick cream and hefty chunks of turkey, which are more pretty tender.

The puff pastry is delicious and flaky–at least, the parts that don’t collapse under the weight of the cream sauce. That’s no knock, just the practical reality of a dish like this. I actually really enjoy this, as it tastes great, is a pretty ambitious dish, and feels like a fusion of American and French cuisine. For those reasons, it’s one of my top picks at Festival of the Holidays. 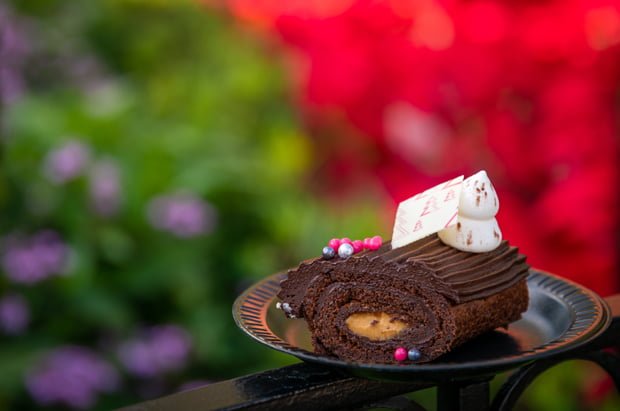 Christmas Log – We had this immediately after the Yule Log at the Yukon booth, and the two are a night and day difference. Yukon’s is light, sweet, and nuanced, whereas France’s is more like a dense instrument of richness.

Not that there’s anything wrong with that. If you like dark chocolate that is rich and semi-bitter, this is an excellent option. The chocolate here does overpower the caramel, but it’s still good. I’d be inclined to revisit this again later, as it’s a really good dessert, but the type of thing I have to be in the mood for. (By contrast, I could eat Canada’s Yule Log all day, everyday.)

Note: there’s also another Christmas Yule Log in Les Halles Boulangerie-Patisserie. I’ve yet to try this year’s version, but it has historically been one of my favorite items at Epcot this time of year.

Overall, le Marche de Noel Holiday Kitchen maintains France’s winning streak. It’s not the best booth at the Epcot International Festival of the Holidays, but everything here is varying degrees of good and recommended, making it one of the booths you’ll definitely want to add to your grazing itinerary. My top recommendation would be the Turkey Puff Pastry, which should be perfect for a cold night. Alternatively, the Salmon Napoleon is no slouch on a warm day. The Christmas Log isn’t my personal favorite, but it’s still a good ‘any-time’ dessert.

What do you think of le Marche de Noel Holiday Kitchen? Have you tried any of the food items at this booth? What did you think of them? Questions we can help you answer? Hearing your feedback–even when you disagree with us–is both interesting to us and helpful to other readers, so please share your thoughts below in the comments!