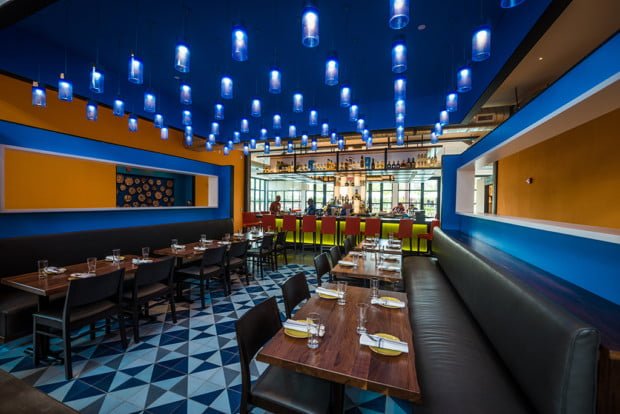 Frontera Cocina is a new table service restaurant in Disney Springs at Walt Disney World. This dining review includes food photos, thoughts on our experience eating at Frontera Cocina, including ambiance and value. In terms of basic info for WDW vacation planners, this is a 1-credit table service restaurant on the Disney Dining Plan, but does not accept Tables in Wonderland for a 20% discount…yet!

With all of the new dining options at Disney Springs, it’s tough to keep track of what’s what. Well, this is the one by Chef Rick Bayless, a six-time James Beard Foundation winner. Chef Bayless is best known for winning Bravo TV’s “Top Chef Masters” program with his authentic Mexican cuisine. He also hosts “Mexico—One Plate at a Time” on public television, and has won awards over his 10-year run doing that.

Beyond television, he has authored several books and runs a handful of Mexican restaurants in Chicago, including Tortas Frontera at O’Hare International Airport, which literally might be the only good thing that airport has going for it. (It’s all been downhill since the Home Alone cameo.) Suffice to say, Chef Bayless has a strong reputation when it comes to Mexican cuisine.

It should thus be no surprise that Frontera Cocina strives to bring authentic Mexican cuisine to Disney Springs, with a menu that’s far more ambitious than what you’ll find anywhere else on property, including the restaurants in World Showcase. Living in Southern California has opened my eyes to high quality Mexican cuisine (although I prefer fast/hole-in-the-wall spots), and Frontera definitely holds its own in this department.

Before we delve further into the food, let’s discuss ambiance. Picture your local mall. Now picture the most ordinary sit-down restaurant in there. Now imagine it with whatever decor it has removed, tequila bottles and a section of blue lights added. Viola, Frontera Cocina! 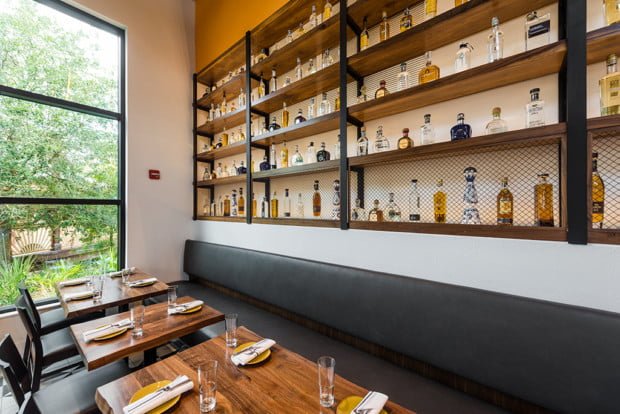 Frontera Cocina describes itself as a contemporary experience with warm colors and a lively atmosphere that “frame an inviting exploration of the many delights from our kitchen.” Um…okay. I guess it’s contemporary in the sense that it was just built, and sure, there are warm colors. On a busy night after one too many margaritas, I’m sure some guests are pretty lively, too. So yeah, totally accurate. 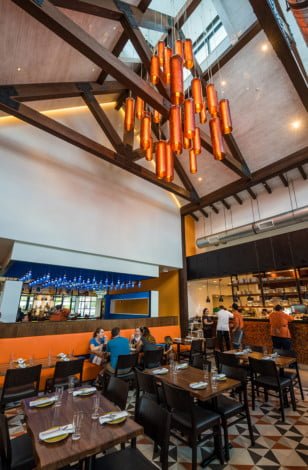 The one high point of atmosphere, I think, actually comes on the outside terrace, which offers some of the best views of the springs in all of Disney Springs. On a cool fall or winter evening, this would be a great view and excellent experience. This is where I’d ask to be seated if I were dining here. 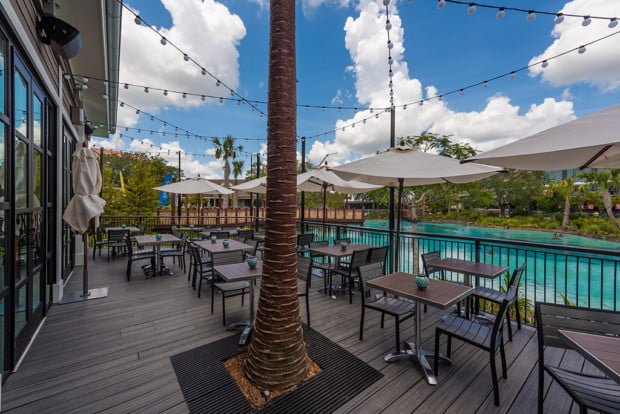 Perhaps more character will come over time when the restaurant isn’t so new, but my initial take is that the design is dull and generic. I was not expecting something kitschy or reminiscent of a hole-in-the-wall joint, as I realize this is high-end dining, but Frontera Cocina could benefit from more personality. 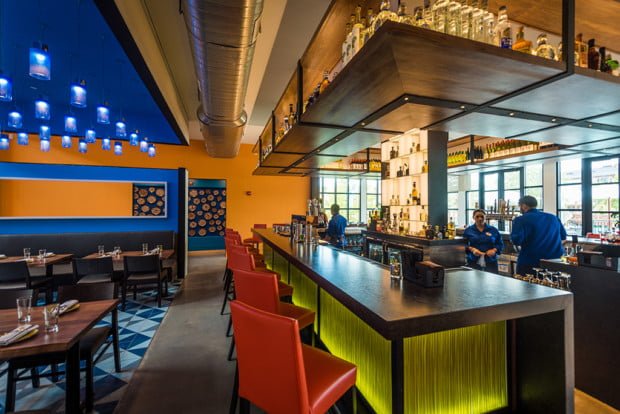 Maybe this does not matter to you, and that’s totally fine. If I were dining here at home, I probably would not have thought twice about the ambiance. However, I expect something more interesting and engaging at Walt Disney World, especially given the robust dining scene at Disney Springs.

In any case, let’s move along to the food–where Frontera Cocina shines… 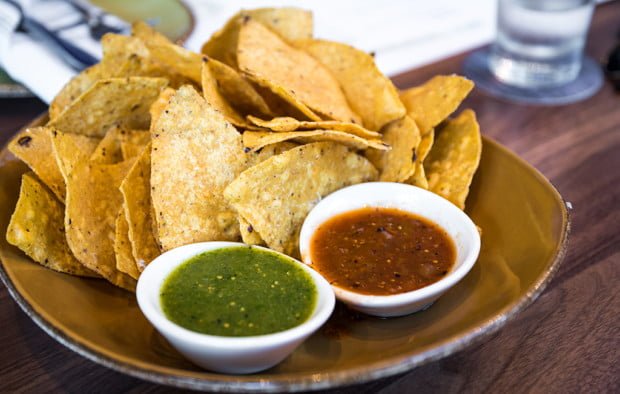 We started with chips & salsa, which they charge for at Frontera Cocina. The chipotle salsa was very good, and actually had a pronounced smoky flavor, but…they charge for chips and salsa here?! 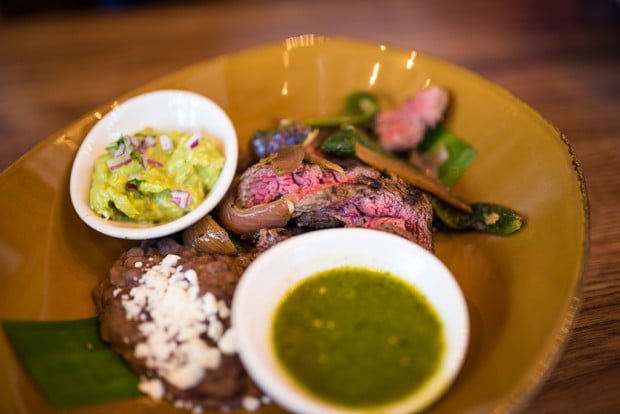 For entrees, Sarah ordered the Carne Asada for making Soft Tacos, which included grilled steak, poblano rajas, black beans refritos topped with Cotija cheese, salsa verde, guacamole, and served with corn tortillas. Her meat was high quality–really tender. She really enjoyed the dish, but thought it was a bit on the small side. 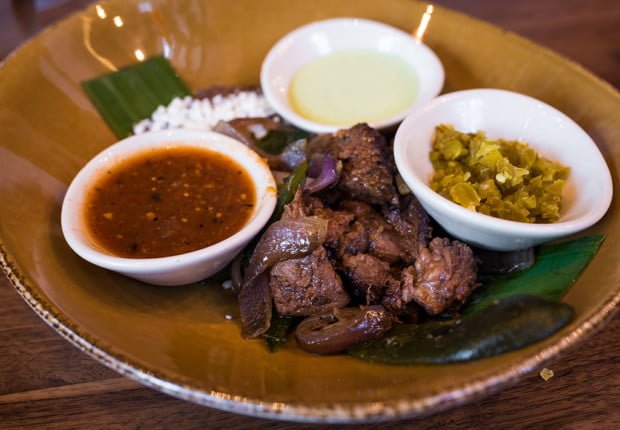 I had the Pepito Torta. This is short rib that’s normally served as a sandwich, but our server recommended it with their house made corn tortillas instead. I opted for this. 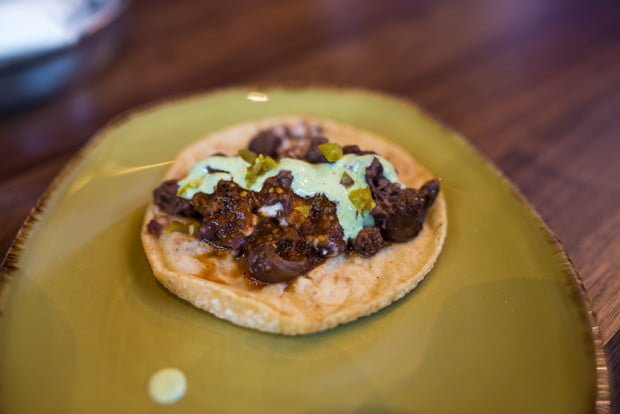 I’m incredibly glad I did. These freshly made, still-warm tortillas had excellent flavor and softness. The meat was also tender, and perfectly prepared. These were some exceptional soft tacos (I was able to make 4), and the dish felt like a reasonable value given both the caliber of the restaurant and the obvious quality of the ingredients. I’d certainly recommend this. 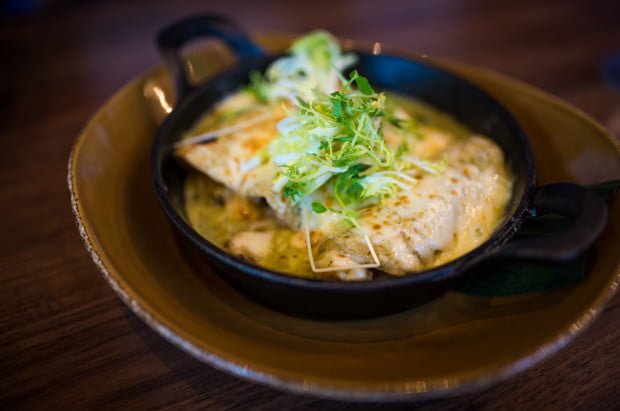 A friend of ours who joined us for the meal ordered the Shrimp Enchiladas Suizas. This dish consists of fresh corn tortillas, MazatalÃ¡n blue shrimp, potato filling, creamy roasted tomatillo sauce, pea shoot, topped with frisée salad. He said this was really good, but I don’t have any additional insight as to why. (Super helpful, I know.) 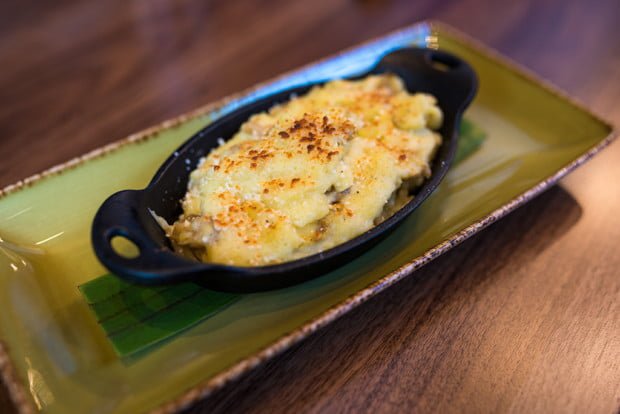 We were also “those people” who order mashed potatoes at a Mexican restaurant. In our defense, these came highly recommended by our server and holy cow were they good. With a light, not-quite-crunchy outer “skin” and soft, gooey potatoes underneath all bonded together with Cotija cheese, these were out of this world.

It’s really not even right to call these mashed potatoes, because they’re truly a unique dish (…and that’s our excuse if someone calls us out on ordering them!). My only mistake was agreeing to share these–even though they’re a bit rich, I really wish I had them all to myself. 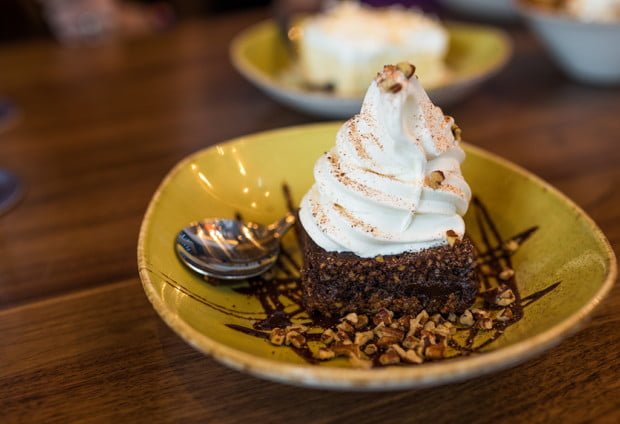 Three different people (it was a slow afternoon at the restaurant) stopped by our table recommending the Pecan Pie because it was “Chef Bayless’ grandma’s recipe.” Along with butterscotch, pecan pie is one of the official treats of elderly people everywhere, so normally someone’s grandma having a pecan pie recipe wouldn’t really register with me. However, I decided to give it a try and it did not disappoint.

Banish whatever preconceptions you have about pecan pie, as this dense bar packs a sweet, rich flavor that is unlike anything you’ve had before. It’s almost like scientists figured out how to make a brownie out of pecans. It’s topped with soft serve ice cream, which seems sort of an odd choice, but I’m a sucker for soft serve, so no complaints there. 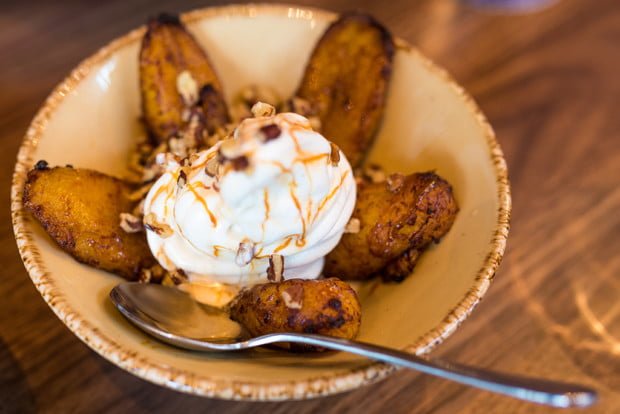 Our friend had the Platano Sundae, which is fried plantains topped with Mexican (soft serve) ice cream. I tried this, and the caramelized plantains here were unbelievably good, with a nice exterior texture that gave way to the soft interior of the plantain. Almost like a banana sundae, but richer and sweeter.

This along with the Pecan Pie Bar rank as two of the best desserts I’ve ever had at Walt Disney World. Dinner at the nearby Homecoming: Florida Kitchen (which I preferred more both in terms of ambiance and cuisine, but cuisine isn’t really an apples to apples comparison; both Frontera Cocina and Homecoming are excellent options in the regard, depending upon what you’re in the mood for) followed by a nightcap and desserts on the terrace at Frontera Cocina sounds about like a perfect evening to me. (Oh, who am I kidding: I’d go full-on pig-out mode and also order the mashed potatoes as my “dessert appetizer” at Frontera Cocina.) 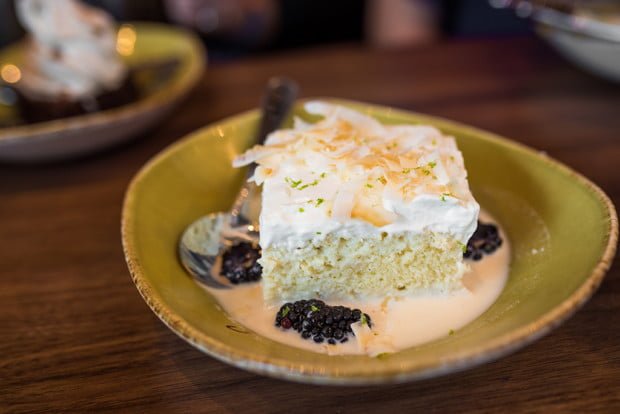 Sarah’s Coconut Lime Quatro Leches Cake was the last dessert I tried, and it paled in comparison to the first two. She was surprised by my reaction, as she absolutely loved it (and had yet to try our desserts). In fairness, the coconut milk (hence “quatro” instead of the traditional tres leches cake) added flavor to the already moist cake, and at any other restaurant, this would’ve been a standout dessert.

In the end, Frontera Cocina is a restaurant that has me torn: the food is very good, but the ambiance is not. I feel badly penalizing such a good restaurant, but ultimately, I would not recommend it to tourists–at least, not ones who are like me. That sentiment might seem contradictory, but for me, a big part of Walt Disney World dining is about theme, and this restaurant is boring. Given Disney Springs’ exceptional slate of dining, choosing a spot with *both* is reasonable. If you’re a local and are sort of “over” theming, Frontera Cocina certainly will not disappoint. Even tourists who love Mexican cuisine and have a tough time finding high quality options near you, might want to give it a try, just be prepared for ambiance that feels straight out of Generic Strip Mall Mexican Restaurant in Anywhere, USA. 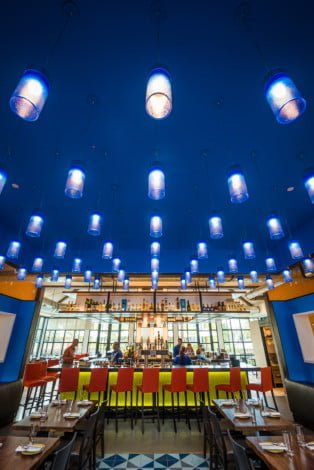 Does Frontera Cocina interest you? Would you be bothered by the generic style, or does that not matter as much as the high-quality cuisine? If you’ve already tried Frontera Cocina, what did you think? Share your thoughts or questions in the comments!