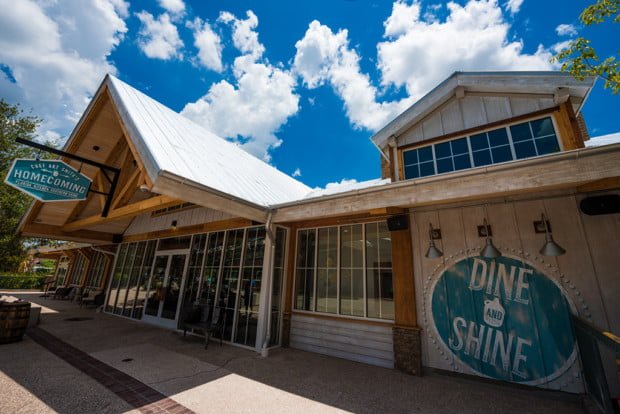 Homecomin’: Florida Kitchen and Southern Shine Review is a new restaurant in Disney Springs at Walt Disney World specializing in down-home Floridian cuisine. This review features food photos, thoughts on the experience, and whether we recommend it if you’re heading to Disney Springs for the day or evening. As background, Homecomin’ accepts the Disney Dining Plan as a 1-credit table service restaurant. Unlike most new restaurants, it also accepts Tables in Wonderland for a 20% discount, or Annual Passes for 10% off.

This restaurant is by Chef Art Smith, who is a famed celebrity chef with a long list of accolades and such, as he makes a return (hence the name) to his Floridian roots. If you’re vacationing in Florida, I think there’s appeal in trying the foods for which the state is known. One of those “when in Rome…” kinda things. Unfortunately, unless I’m missing something, there aren’t really any Walt Disney World restaurants that strive for this type of experience. Citricos and Narcoossee’s sorta do, but not to the extent that I’d describe either as “Floridian cuisine.” Another favorite of ours, Hemingway’s at the nearby Hyatt Regency Grand Cypress, takes a similar approach.

None do Florida cooking as well as Homecomin’, which joins a long list of new restaurants at Disney Springs that seems to be growing more formidable by the day. We’ve stopped trying to keep track of everything slated to open there, as it seems new developments are occurring weekly. More variety and high quality dining is certainly a good thing–especially for locals–but as a tourist with limited vacation time, it makes for some tough decisions.

The interior of the restaurant is light and airy, with exposed cypress wood and some of the typical design motifs you’ll find in a lot of “raw” and “trendy” restaurants, but without going full (or even partial) bore obnoxious hipster. 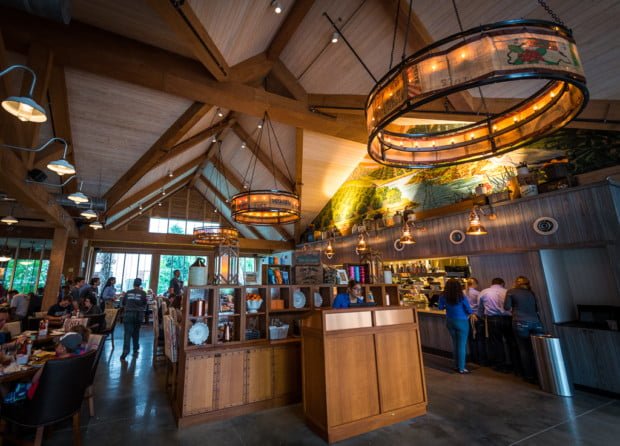 Rather, the style here works, and Floridian art and design flourishes balance out the trendy elements and provide sufficient character and charm to the restaurant. 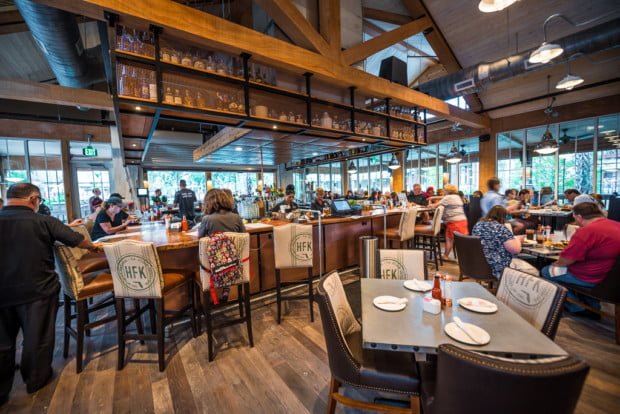 As a third party restaurant, this isn’t going to be heavily Imagineered like locations in the park, but Homecomin’s atmosphere feels inviting and authentic. It takes an approach that toes the line between generic/understated and an all-out Cracker Barrel approach very well. Even still, on a cool day or evening, I’d prefer dining outside (where we sat) overlooking the turquoise springs. 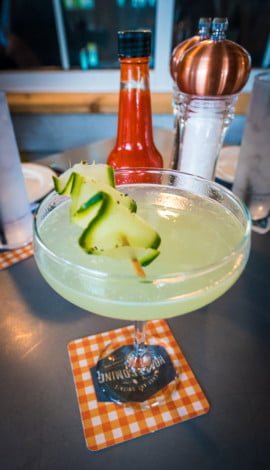 Having drawn the short straw at the Annual Disney Blogging Bros Summit, it was our task to babysit Josh from easyWDW for the afternoon. Josh is the Jose Canseco of Disney bloggers: totally crazy, but you have to give mad respect to anyone with the dedication to paint their desert tortoise to look like Iron Man.

Josh’s proverbial tortoise painting is Walt Disney World dining updates and reviews. He isn’t doing anything as noble as coloring terrapins, but at least it keeps him off the streets. Regardless, that dedication plus reviews that are evenhanded–rather than bursting with emphatic positivity about everything Disney churns out–makes his a site we enjoy and recommend. (But if you tell him I said anything nice, I will unequivocally deny it.) 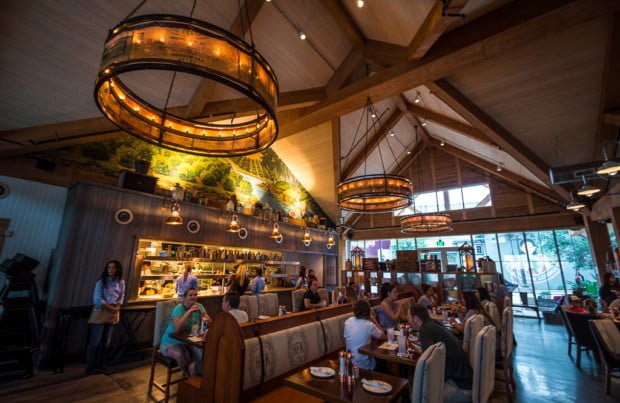 Dining with blogging royalty like Josh isn’t all helping him stay safe while he wanders aimlessly chasing Pokemon like you might think. In this case, it also meant that Chef Art Smith stopped by our table to make small talk (in actuality, I’m pretty sure he stopped at every table–we dined here on the second night the restaurant was open). Rather than asking him insightful questions about the menu or his vision for building in Disney Springs like a good “journalist” might, we talked with Chef Smith about…cats. I have zero regrets. 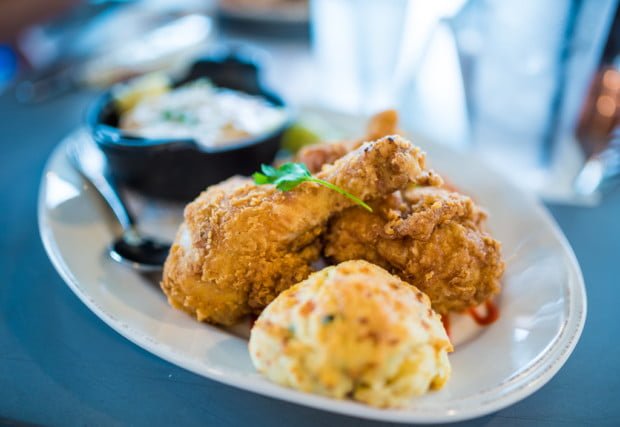 The highlight here is the 24-hour buttermilk brine on the chicken. In scientific terms, the chicken acts as a sponge, soaking up that buttermilky goodness, resulting in a moist and tender meat that doesn’t suffer from any dryness, even at the most meat-dense portions of the fried chicken. In mathematic terms, the result of this process is a dangerously high juiciness exponential. 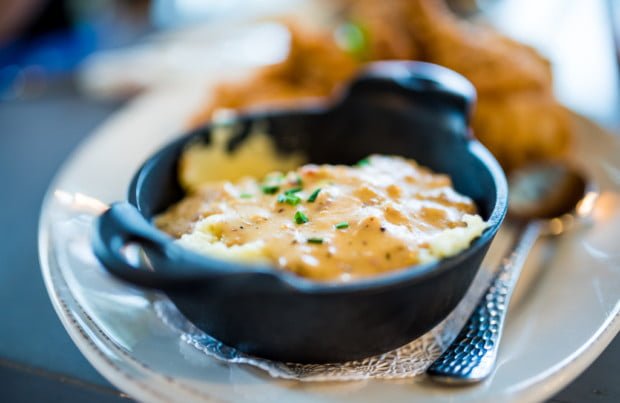 The herb and spice batter on the chicken is thin, delivering a nice texture and flavor without overpowering the brined meat (or masking dry chicken, as is often the case). In addition to 3 large pieces of fried chicken, the dish is also served with deliciously rich, creamy mashed potatoes and a (fine, but forgettable) cheddar biscuit. It’s one of pricier items on the menu, but given the portion size, still a solid value relative to other Walt Disney World restaurants. 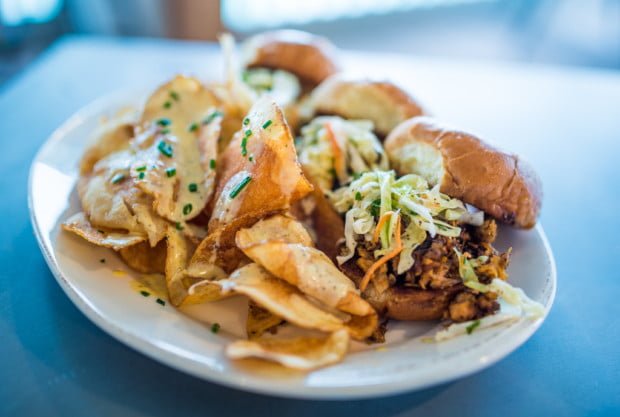 Since we decided to split our entrees and didn’t want a ton of food, Sarah elected to order the Chopped Pork Barbecue Sandwich (one of several main entrees that has a smaller, sandwich counterpart that provides a cheaper way to try the larger dish), consisting of 3 rolls heaped with HFK sweet and spicy barbecue chopped pork, and topped with Southern slaw. 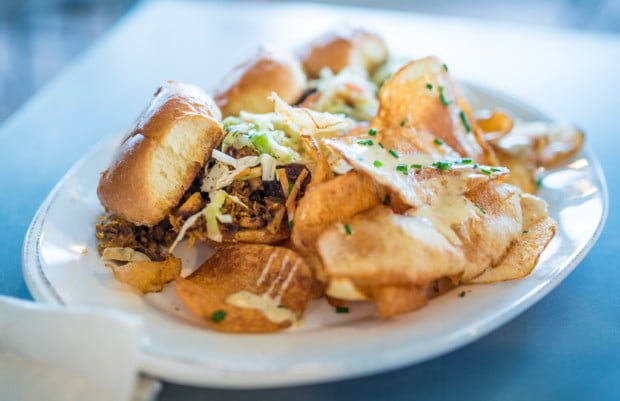 On Josh’s recommendation (he had already dined there 7 times since it opened the previous day), we also requested a side of the HFK BBQ sauce, and it was delicious. This sauce manages to be sweet, tangy, and spicy all at once and provides added flavor to tender pork that didn’t need any crutch. 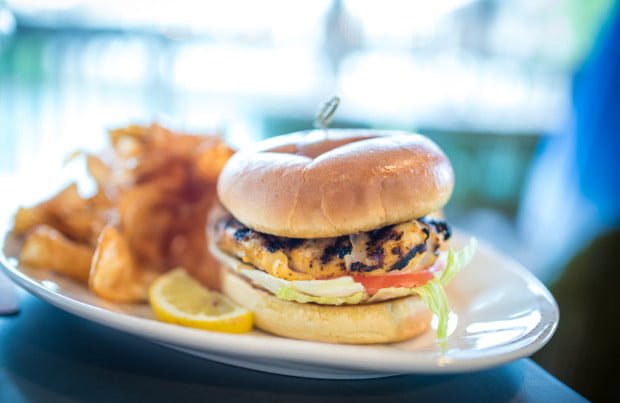 Josh ordered the Big Fish Sandwich, which consisted of grilled fresh Florida fish of the day (in this case, grouper, I believe), hot sauce aioli, shaved lettuce, and tomato. I tried a bit of the fish outside of the sandwich, and was impressed with the flakiness and flavor of the fish. 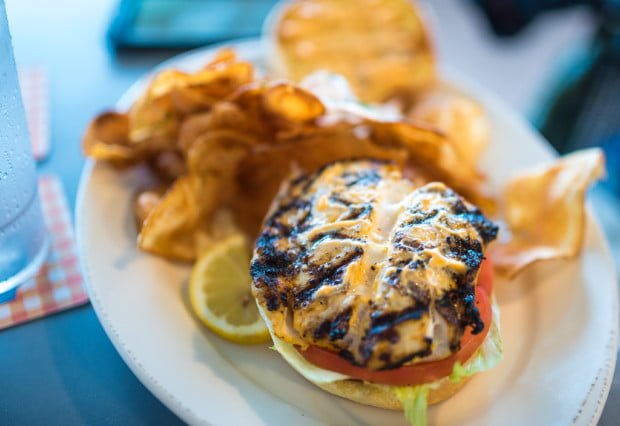 Like the pork, this fish could have (and maybe should have?) stood on its own. It seemed like a bit of a shame that such delicious fish would be masked by bun, lettuce, and tomato. 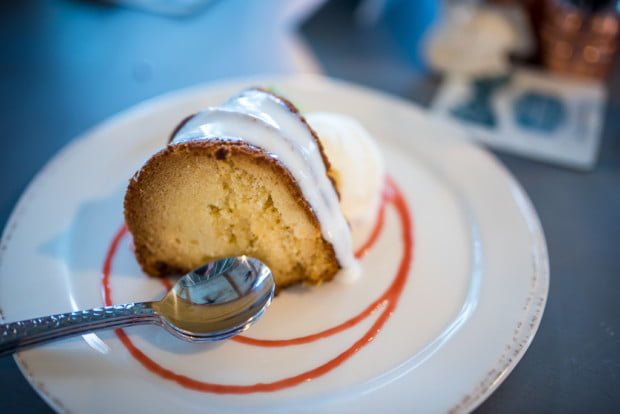 For dessert, we had a difficult time choosing between the Shine Cake and the Hummingbird Cake, both of which came highly recommended. Not wanting to overdo it before going to Typhoon Lagoon, we ordered the Shine Cake to split. It’s described on the menu as an adult-only butter cake soaked with moonshine syrup, and served with a scoop of vanilla bean ice cream. 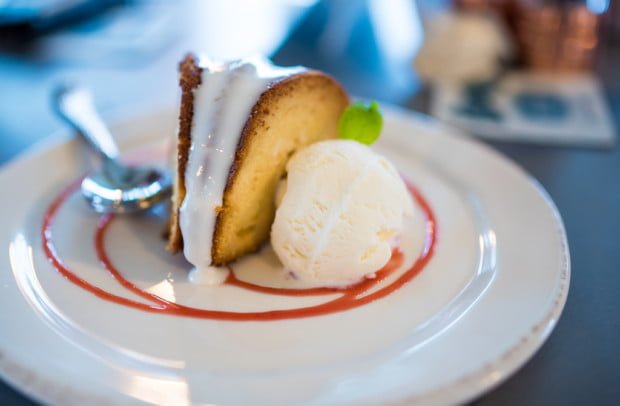 This was our one disappointment of the meal, and even it wasn’t much of a disappointment. It was still good, but based on the rest of the meal, we were expecting something that redefined the traditional rum cake. Given the sheer quantity of exceptional restaurants at Disney Springs–particularly those with great desserts–I’d probably skip dessert here and do it elsewhere, progressive-meal style. 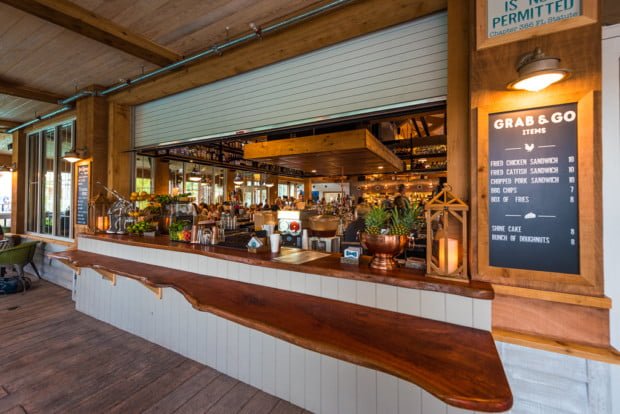 Both of the sandwiches Sarah and Josh ordered offered great value, providing options at the upper-end counter service prices, but with significantly higher quality. We recommend the approach of ordering a sandwich and main entree and sharing, that plus dessert, tax, and tip (minus Tables in Wonderland) ended up costing us a little over $25/person here, which wasn’t bad. It’s nice to have options at a range of prices, allowing for a (relatively) inexpensive–or expensive–meal depending upon whether you’re paying out of pocket or on the Disney Dining Plan.

Overall, Homecomin’ is yet another home run for Disney Springs. I’d slot it just below The Boathouse and Morimoto Asia in terms of the new restaurants there at which we’ve dined. Really, though, that’s a matter of personal preference and what type of cuisine/experience you’re in the mood for. You can’t go wrong with any of those choices in terms of cuisine, ambiance, and (potentially) value. The atmosphere of Homecomin’ and down-home Floridian cooking make it an inviting option, particularly for a more casual meal. We will definitely be back to Homecomin’–well, once Disney Springs stops opening new restaurants every other day that we “have” to try in the name of research. 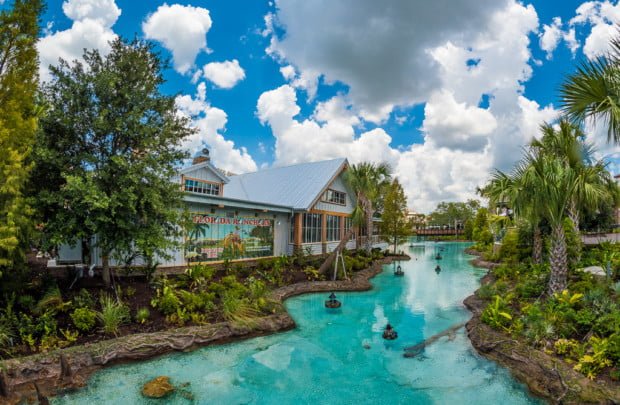 What do you think of Homecoming: Florida Kitchen and Southern Shine? Are you interested in eating here? Have you already dined at Homecoming? Any menu recommendations of your own? If you don’t like Homecoming, why not? Share your thoughts or questions in the comments!