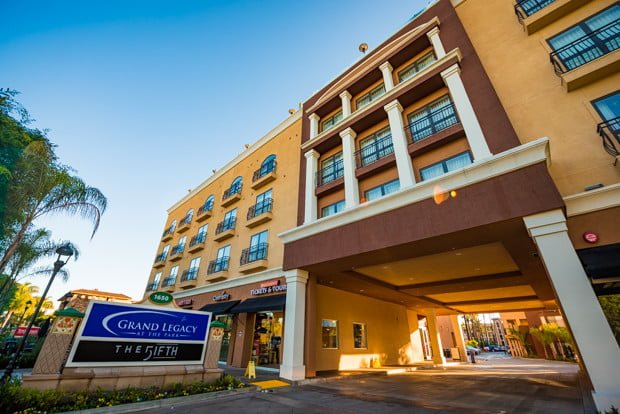 Grand Legacy at the Park is one of the closest hotels to Disneyland and Disney California Adventure. This review features room photos, thoughts about our experience of staying here, and whether Grand Legacy is a good option for your Disneyland trip.

If you’re a Disneyland fan but are unfamiliar with the name Grand Legacy at the Park, perhaps you’ve heard of Ramada Maingate At The Park–that’s what this hotel used to be called. After completing a large-scale development refurbishment late last year, the hotel opted to go independent. Presumably, this was because it’s no longer the 1970s, so there’s no brand cachet in being a “Ramada” hotel. (Any bets on how long before the Anaheim ‘HoJo’ drops the Howard Johnson branding?)

This development of the Grand Legacy was a $12 million project that added a new four-story hotel wing with guest rooms, a new lobby, six retail outlets, eating areas, meeting space and a rooftop bar called The Fifth. While we didn’t have a chance to go to the bar during our stay at the Grand Legacy, we’ve only heard good things about it.

It’s part of the cluster of hotels “across the street” from Disneyland, pretty much all of which are budget to moderate tier hotels with exterior hallways (pretty common in Southern California). Although these hotels do differ in quality and price, all quite close to the park. Although it’s not listed as one of the Disneyland Good Neighbor Hotels on Disney’s site (a meaningless distinction that is a marketing thing, not some sort of “quality certification” anyway), Grand Legacy at the Park is a Good Neighbor Hotel.

You can get an idea of how Grand Legacy stacks up to the competition in our Disneyland Hotels Reviews & Rankings post. We also have an overall comparison of the benefits of staying off-site versus on-site in our Where to Stay at Disneyland post. If you’re looking for comprehensive planning advice for all aspects of your trip, consult our thorough Disneyland Vacation Planning Guide.

So what are the pros and cons of staying at Grand Legacy at the Park? Let’s take a look… 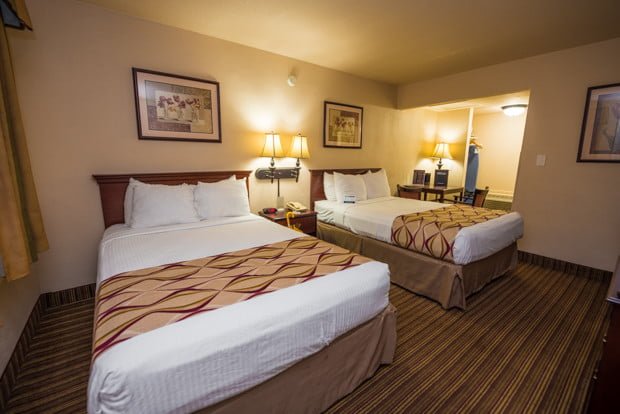 We’ll start with amenities. The key ones are free WiFi and free continental breakfast. At the budget hotels near Disneyland, both are pretty standard. I’d say about half of these hotels charge for parking, and Grand Legacy at the Park is one such hotel.

During our stay here (on New Year’s Eve), the parking situation was really frustrating. All of the hotel’s parking spots were full, so valet was double-triple parking cars to accommodate everyone. The rooftop restaurant at the hotel was having a New Year’s party, so I suspect that added to the parking lot congestion.

However, I know valet is normally offered here for “free” (you still have to pay for parking, just not extra for valet), and I suspect that’s because there’s insufficient parking at Grand Legacy. I’m not a fan at using valet parking at a motel, but that’s just me. Something to keep in mind if you’re planning a stay during a busier time of year. 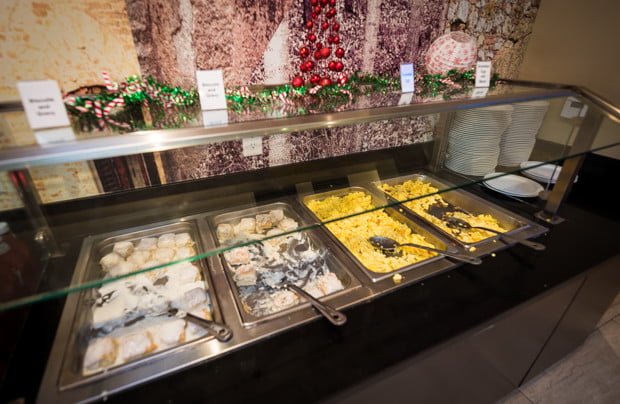 As is the case with most other hotels near Disneyland, the continental breakfast was abysmal. Some of these hotels have been stepping up their game in this regard, but not Grand Legacy. There were only a few hot items (notably, biscuits & gravy and eggs with bacon bits in them) and all were inedible. If you’ve ever wondered how to make powdered eggs taste even more fake, I’ve got your answer: add bacon bits.

Fruit, cereal, and bagels are present here, and always safe options. So I guess at least that’s a plus, at least? For a hotel that seems to be positioning itself as nicer than the budget hotels in the area, it’s disappointing that no effort is made on breakfast. 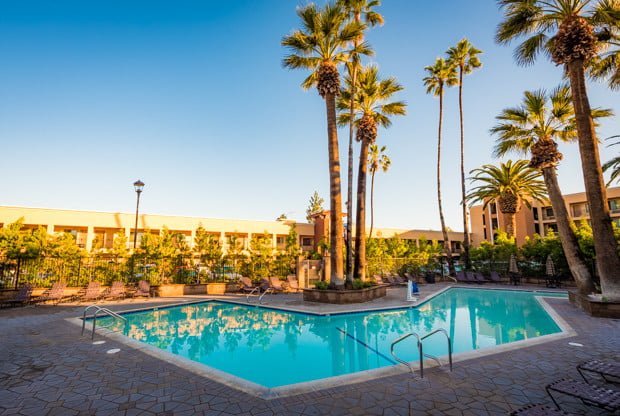 On the other hand, the pool (gated off and closed during our stay–presumably due to cold weather) looked nicer and larger than the norm, and had a slight bit of isolation (despite being in the center of the parking lot) thanks to some trees and foliage. 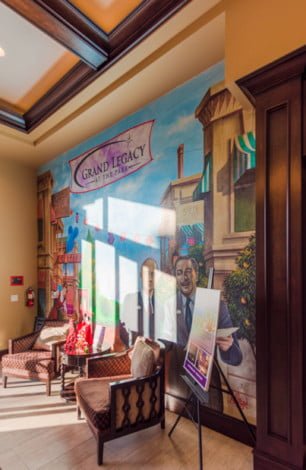 The lobby clearly benefitted from the refurbishment, and is fairly nice. There’s also a fairly…uh…interesting?…mural with Walt Disney in it. I guess you could say it’s a thoughtful touch, but it just struck me as weird. Moreover, it feels out of place in an environment that is otherwise fairly chic.

The restaurants in Grand Legacy at the Park are also a potential amenity. As mentioned, The Fifth is quickly becoming a popular rooftop bar in the area, and everyone we know who has been enjoyed the experience. If you’re going up here, definitely try to coincide that with Disneyland’s fireworks.

There’s also Pizzatarian, which is a new restaurant that’s garnering rave reviews on Yelp. (The name alone has me sold on it.) Granted, you don’t have to stay at Grand Legacy at the Park to dine at either of these spots, but they are conveniently located for hotel guests. 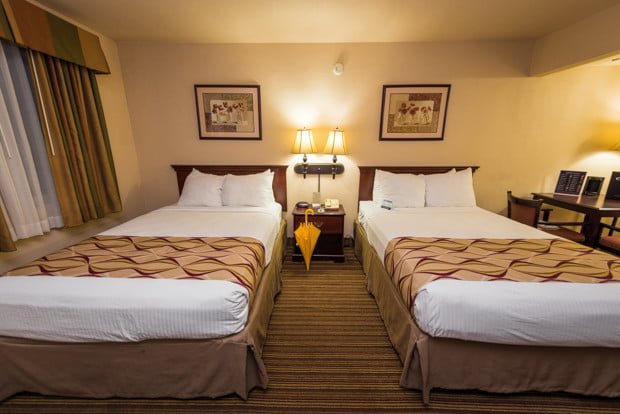 Then there are the rooms. When I heard that Grand Legacy at the Park was doing a multi-million dollar overhaul, I assumed the guest rooms would be part of that.

However, our room seemed fairly basic. It probably has had a soft goods refurbishment in the last 5 years, but it didn’t seem like anything special had been done here. Certainly not a top to bottom refurbishment. 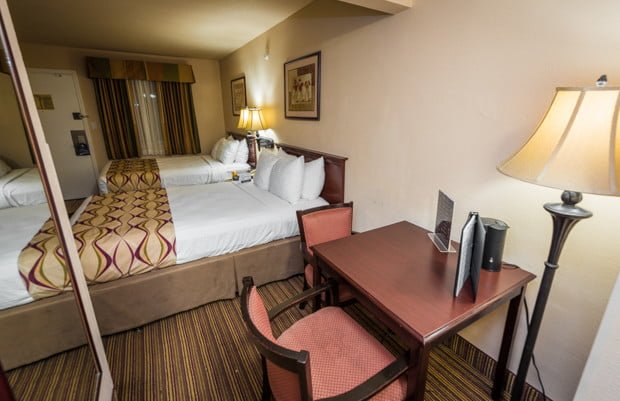 I’d describe it as small but serviceable. I’m guessing the money spent on guest rooms largely went towards family suites in the new wing. There has been a boom in the family suites market in Anaheim over the last few years, so this hotel probably wanted to capitalize on that. 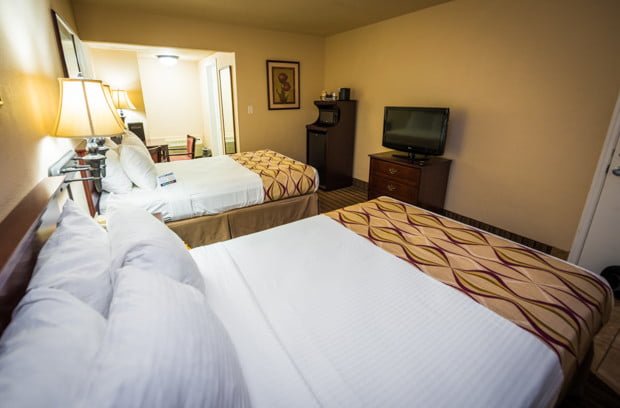 If you’re just a couple looking for a clean, safe room, Grand Legacy is absolutely a good option when it comes to the standard rooms. If you’re a family with kids, these rooms might be a bit on the small side.

The pillows and bedding were above average. The mattress was a tad firm for my liking, but it did not feel as if it was low quality. 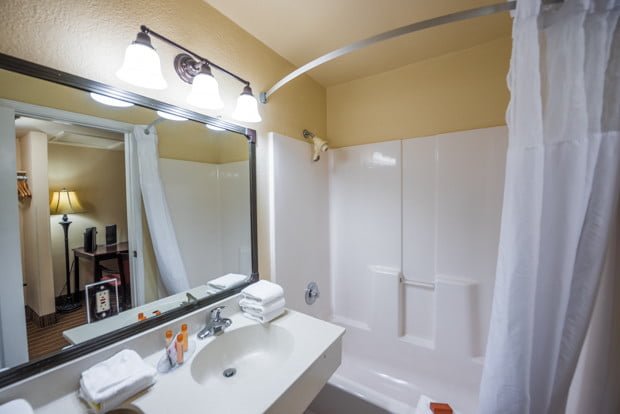 As with virtually all hotels in Anaheim, the bathroom was basic. The toiletries were nice, but otherwise, completely standard here. 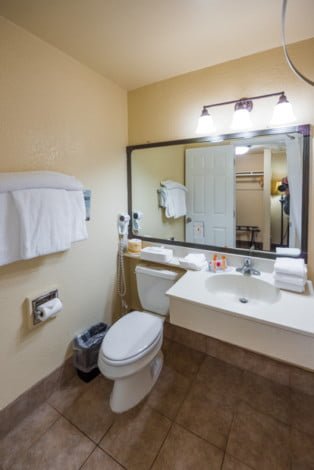 Prices fluctuate among all of these area hotels pretty dramatically, though, so which option is the ‘best value’ really depends upon your travel dates. My personal take is that anything in the $125/night range is ‘fair’ for Grand Legacy at the Park’s standard rooms. (If you’re driving, keep in mind that’s another $12/night expense that you might not have at other nearby hotels.)

Overall, Grand Legacy at the Park is a mixed bag. Some of the recent addition are really nice, but unless you stay in the new wing (presumably, the family suites) you probably won’t even be able to tell that such a dramatic overhaul occurred, because it does not feel like much was invested in the standard guest rooms. With Anaheim’s hotel market becoming more and more competitive, you can do better in terms of a guest room. Where it’s difficult to do better is in terms of distance to Disneyland and Disney California Adventure. That is going to be an overriding factor for a lot of families. What about you…if you’ve stayed at the Grand Legacy at the Park, what did you think of it? Please share your thoughts or questions in the comments section below!

20 Responses to “Grand Legacy at the Park Review”