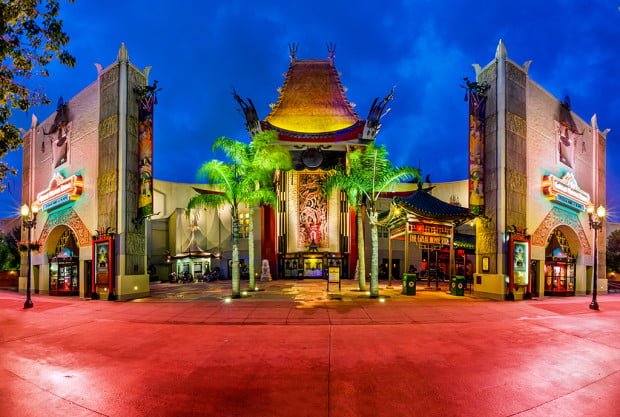 Ever thought it’s odd that Walt Disney’s most iconic creation, Mickey Mouse, does not have a flagship E-Ticket attraction in Walt Disney World? Well, that might be about to change. Rumors have been swirling that Disney does not intend to extend the TCM sponsorship of the Great Movie Ride, that was otherwise up for renewal in 2018 and that Disney would replace the attraction with the Great Mickey Ride. (Last updated July 12, 2017.)

Additional rumored details about the Great Movie Ride’s replacement attraction are that it would be a trackless dark ride taking guests through the Big Cheese’s history and different performances he has given, in a vignette/montage attraction akin to Great Movie Ride…but just with Mickey Mouse and his films. It is expected that the Grauman’s Chinese Theater facade would remain under these plans.

July 12, 2017 Update: Yesterday, Imagineering filed a “Notice of Commencement” permit with the Orange County, Florida Comptroller for “Project M – Package 1” with Great Movie Ride’s approximate location identified as where the work is to occur. The expiration of the permit is October 31, 2019. This permit raises some interesting questions…

First, is the name–Project M–referring to Mickey Mouse? Does this being Package 1 suggest that other packages are to follow? (Normally, projects of this scope would have numerous permits.) Does the 2019 completion date mean the attraction will be done by then? (Doubtful. The rumored target date for opening is October 2021. It’s likely 2019 is just the end date for this package/phase of the work.)

As with so many Walt Disney World rumors that are currently floating around, we are guessing and hoping that all will be revealed at the D23 Expo this weekend. Then again, there’s only so much that can be announced at once, and perhaps this is not one of the things that will make the cut? Either way, it’s shaping up to be an exciting Expo!

Back to the original article… 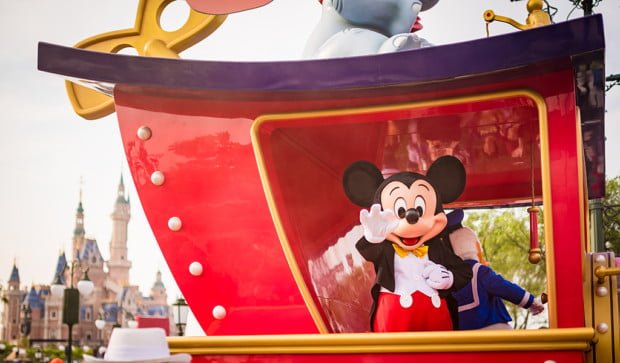 I’ve expressed a lot of very strong opinions over the years concerning The Great Movie Ride and Grauman’s Chinese Theater. Many of these have been at odds with popular sentiment. Four years ago, I published an editorial imploring Mr. Iger to Tear Down that Hat! (HE LISTENED 😉 ), arguing that the Mickey Sorcerer Hat was thematically jarring and inappropriate for an intersection that represented old Hollywood. Many commenters disagreed, feeling nothing there was no better “Disney” icon for a park about filmmaking than that icon.

More recently, I praised the TCM sponsorship of the Great Movie Ride, contending that it would help prevent the attraction from featuring popular but awful turds like Transformers in becoming the “The Currently Relevant Movie Ride.” In that post, I said, “I would rather see [The Great Movie Ride] removed completely before featuring movies that are popular today, but have a good chance of not standing the test of time.” Well, now it appears “disappear completely” is exactly what will happen after the Turner Classic Movies sponsorship ends in 2018.

Despite those impassioned editorials, I can’t say I will be at all disappointed if the current rumor of The Great Mickey Ride coming to Walt Disney World proves true. The writing has been on the wall for a while with regard to The Great Movie Ride. It seemed that the TCM forestalled the inevitable for a little while, but without a large-scale refurbishment at that time, that’s all it did.

My biggest fear with an update to The Great Movie Ride has always been, and still is, that Disney would opt for flavors of the month films that are hot at the time of the update, but are not truly great, and cause the attraction to show its age within a few years. That, coupled with Disney’s slowness to refresh attractions like this seem like a recipe for disaster. Imagine if such a refresh happened ~5 years ago: we’d pass the smurf-aliens of Avatar (wait…bad example), the sexy vampires of Twilight, and the actual smurfs of The Smurfs. Perhaps we’d also get some Saw 3D action to pander to the edgy, teen demo.

Such current films in the attraction might’ve played well through 2012, but even after that, how much would guests care about those movies? Certainly the ride would look dated in 2016–more dated than the timeless approach of focusing on classic cinema. (And the critical distinction between Pandora as a land and Avatar as a feature in the ride is that the land depends upon the appeal of the Imagineered environment, not name recognition of the film itself–as would be the case in Great Movie Ride.) 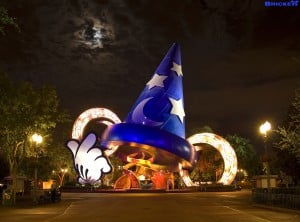 My second concern was that we’d lose Grauman’s Chinese Theater as the park’s icon so soon after finally getting it back. While many guests don’t recognize the theater, I can’t think of any Hollywood landmark (save for the Hollywood sign itself) that is more iconic.

The actual theater (now TCL Chinese Theatre) still is a regular spot for red carpet premieres, and is a huge draw for tourists. Even as the theme of Disney’s Hollywood Studios has and will loosen during the park’s expansion, Grauman’s Chinese Theater still exemplifies old Hollywood, which will remain the theme of Hollywood and Sunset Boulevards going forward. If the park does become Disney’s Hollywood Adventure, it will still be the perfect icon.

With those concerns in mind, I must face the crushing reality that The Great Movie Ride likely does not resonate with today’s parkgoers. “Kids these days” don’t appreciate the classics (well, neither do adults). Even setting aside the films represented, I have to admit that the attraction does not pack the same punch that it once did. Part of this could be remedied with the script, which was tweaked with the TCM sponsorship, but not enough. Another part is that the “hijacked” premise doesn’t play as well as it once did. A final part is that the attraction just does not engage guests particularly well (compounded when–as it normally does–the hijack scene falls flat).

As both a cinefile and guest who holds a lot of nostalgia for The Great Movie Ride from my childhood, the idea of The Great Movie Ride closing is a very tough pill to swallow. I strongly believe that the attraction could be updated with a new script, addition of other classic films, and engaging new scenes (think the crop duster from North by Northwest swooping over the ride vehicles) that would breathe life into it and make it popular with guests.

Then there’s the realist in me–the one who recognizes the likelihood of Disney taking a “gamble” on such an update, particularly with older IP it does not own, is exceedingly unlikely. This part of me asks, “what’s the best case scenario for The Great Movie Ride of the options that seem plausible?” 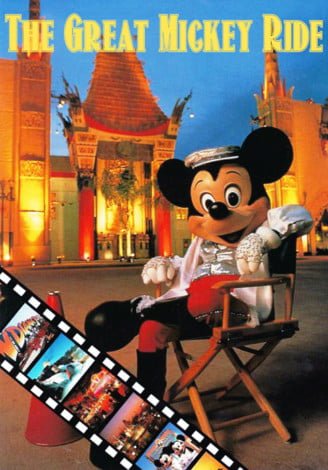 The Great Mickey Ride is the answer to that. It’s rumored to be a trackless dark ride, akin to Ratatouille: L’Aventure Totalement Toquée de Rémy in Paris. In my review of that attraction, I noted that the concept of this ride system with a rat scurrying about held a lot of promise, and the same is true with it being used for a Mickey Mouse attraction.

In a perfect world, this concept would be lavish in both the trackless ride system and the show scenes, taking guests through Mickey’s most iconic on-screen roles, with appearances from other characters along the way. Imagine Oswald the Lucky Rabbit hopping or ride vehicles having to dart out of the way as Goofy stumbles towards them. As an attraction bringing these animated characters to life, it could perfectly marry a trackless ride system with advanced Audio Animatronics as well as project-mapping to enable Walt’s creations to “come alive.”

It should be noted that this is not the first time something like this has been pitched. The idea for a “Mickey Mouse Studio Tour” attraction dates back to Ward Kimball, who worked on the concept for Fantasyland:

More from the Mickey Mouse Studio Tour. These showed up for auction along with a memo from Marty Sklar last year. pic.twitter.com/55vrAZXVRX

As promised, sketches from the Mickey Mouse Studio Tour attraction Ward Kimball was working on for Fantasyland. pic.twitter.com/AbbTPEeIjQ

The concept holds the potential for a similarly timeless quality that The Great Movie Ride has (to some degree), while also offering a more dynamic experience that will really wow guests and appeal to a wide range of demographics.

If done well, it’s an incredibly solid concept–almost to the point where it’s surprising this hasn’t happened already. Of course, “if done well” is the major caveat, and my wild visions for what the attraction aren’t necessarily what it will be… 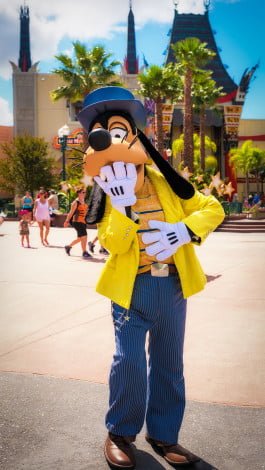 Given the timeline and other capex at Disney’s Hollywood Studios in the next 3-5 years, I’m not convinced The Great Mickey Ride will ever come to pass–at least not in “best case scenario” form. If is built in such close time proximity to Star Wars Land, I’m concerned that it will be a scaled-back version of the rumors being floated now.

Disney is already spending a tremendous amount of money to “fix” Disney’s Hollywood Studios, and while it’s conceivable that this has been/will be greenlit as part of a massive “2.0” version of the park (think Disney California Adventure’s overhaul), it’s also possible that whatever plans there are could be cut or scaled back if/when Star Wars Land goes over budget.

With that said, I think the potential for this attraction is through the roof. If The Great Movie Ride must close, The Great Mickey Ride sounds like a great option. A cutting-edge Mickey Mouse attraction as the park’s centerpiece behind the famed facade of Grauman’s Chinese Thater sounds almost perfect.

The “almost” part of this is because I don’t think The Great Movie Ride “must” close. It would be costly, but Great Movie Ride could be updated in such a way to keep its heart while also making it more appealing with guests. Moreover, with Star Wars Land and Toy Story Land likely drawing 3-4 million more guests to DHS each year, the park will need even more capacity. This comes via building new attractions rather than replacing existing ones.

Still, at the end of the day, the overall vision for the future of Disney’s Hollywood Adventure looks to be a promising one, and it’s hard to complain too much if this does end up as a replacement for The Great Movie Ride, especially with everything that is being added to the back of the park. For the meantime, count me as “cautiously optimistic” about The Great Mickey Ride concept. It has the potential to be an incredible, flagship attraction for Disney’s Hollywood Studios if it comes to fruition at all, and if it’s given a budget worthy of Mickey Mouse. Two very big “ifs.”

What do you think of The Great Mickey Ride concept? Would you welcome this as a replacement for The Great Movie Ride? Not thrilled about the idea? Think it’s unlikely to happen, so not worth getting worked up about? Share your thoughts you have in the comments!