It’s still early August…which means Halloween 2022 is here at Walt Disney World! We don’t normally do merchandise updates for these seasonal events, but happened to be in Magic Kingdom on release morning, so here’s a look at the Spirit Jerseys, MagicBands, shirts, hats, and everything else for spooky season.

In this post, I’ll share photos of the items released thus far for Halloween 2022 at Magic Kingdom, which are being sold in the Emporium and other select locations around the park as well as other gift shops at Walt Disney World.

Note that this does not include 2022 Mickey’s Not So Scary Halloween Party exclusive merchandise–if there’s interest, we’ll update with that this weekend. It’s also likely that this isn’t the entirety of the lineup, as supply chain shortages remain an issue–albeit to a very minor degree at this point.

I’ll level with you: I didn’t set out to Magic Kingdom this morning with the intention of writing this post. I had no clue whatsoever that Halloween merchandise would be released today. Judging by the crowd of vloggers, bloggers, resellers, and other “ers” that I’m probably forgetting, I was about the only one who did not know this.

Even on a normal day, attempting to navigate Walt Disney World’s gift shops can be an uncomfortable proposition. When new items are released or restocked–and eBay pirates dock their ships and storm the stores–it’s exponentially worse. If you’ve never experienced this, how unpleasant it is cannot be overstated. I’d normally rather watch back to back showings of Beauty and the Beast: Sing-Along than visit the Emporium on those mornings. My actual goal was capturing photos of the Main Street USA Halloween decorations, which I also accomplished–albeit to an unsatisfactory degree. The lighting wasn’t quite right and the sky was dull, plus I still need night photos. So I’ll save that until (hopefully) tomorrow, when I can share a higher quality update.

After finishing up with the outdoor photos, I made my way to the Emporium after most of the chaos had subsided and captured some quick shots to share. When it come to merchandise, my standards aren’t as high, so I’ll share those photos today. Along with the photos and Halloween 2022 Walt Disney World merchandise prices, I’ll also offer my clothing critiques, which is especially valuable given that I usually dress like someone who is in desperate need of the help from What Not to Wear. (Speaking of which, if you spot some dork in a bucket hat in the background of vlogs today…)

With that said, let’s take a look at the items available for Halloween 2022 at Magic Kingdom… 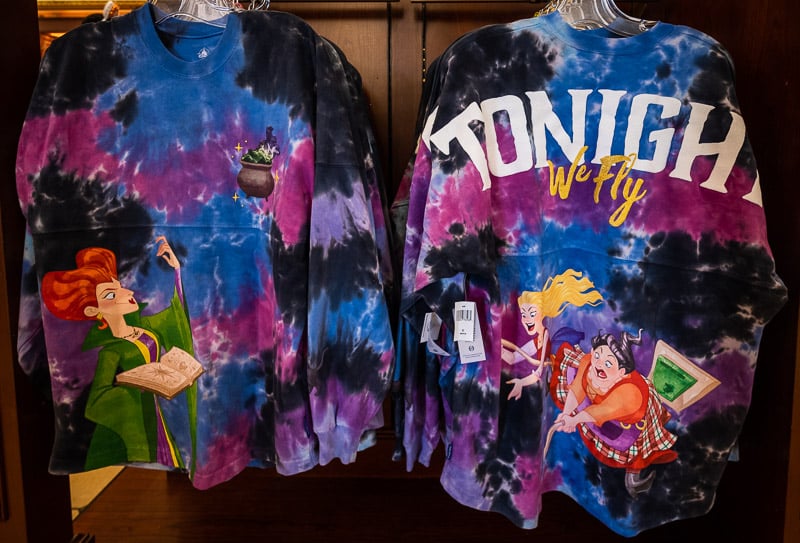 I’ve learned better than to speak candidly about Spirit Jerseys given their huge following.

I’ll just say that, to Disney’s credit, these puppies are offering more bang for buck now. They used to cost ~$40 but only said Walt Disney World on the back, making the cost approximately $40 per graphic. This one costs $74.99 but has the whole visual kitchen sink going on. It’s like only $20 per graphic–a downright bargain!

Clearly Walt Disney World doesn’t follow the pricing policies of Dan Flashes. This Spirit Jersey should cost $1,749 because the pattern is so complicated!!! Here’s the Hocus Pocus Villain Spelltacular MagicBand (OG variety). This is a limited edition of 3,780 and costs $39.99.

The design features the Sanderson Sisters on one side, and Jack Skellington with Zero from The Nightmare Before Christmas on the other side. The MagicBand says “Hocus Pocus Villain Spelltacular” as well as “Magic Kingdom 2022” on one side. The other side says “Frightful Friends Unite.” Next up is this black sweatshirt featuring classic character models of Mickey and friends decked out for Halloween. This same style of costumed characters are on a lot of the merchandise, and they look fantastic. The iconic Walt Disney World “D” logo on the chest is nicely embroidered, too. This is a Spirit Jersey, but for dogs. Technically any appropriately-sized four-legged critter could wear it, not just dogs. When our cat wears clothes, he walks backwards for some reason.

It costs $39.99. However, with the less complicated pattern this one is definitely worth less. Here we have another Spirit Jersey with a less complicated pattern, and for smaller critters (in this case, children).

This one is $44.99. Too bad there’s not a version of this for adults, as it’s far and away the best Spirit Jersey of the bunch. There’s also a hay bale, but it’s for decorative purposes only. The pants above are $59.99 and the hoodie is $69.99. I know loungewear can be expensive, but you can get something nice from lululemon, Nike, or whatever floats your boat for these prices. This button-down with the cool character models is $59.99.

I really like this and $60 doesn’t seem too unreasonable given the shirt type, but I’ve found the quality of these shirts leaves a lot to be desired. Cheap material, boxy cuts, and poor construction. I’ll buy this type of thing for <$25 when it reaches the outlet, but this design is good enough that it likely won’t end up at the outlet. This Mickey Soap Dispenser dispenses soap into the shape of Mickey onto your hand.

At $19.99, it’s a fun and practical gift-giving souvenir. This one gets my endorsement. Thanks to its versatile pun, this mug can double as a cup for coffee in the morning and beer later in the day (or vice-versa, we’re not here to judge).

This costs $34.99, which seems like a lot until you consider that aforementioned versatility. One mug for all-day drinking! 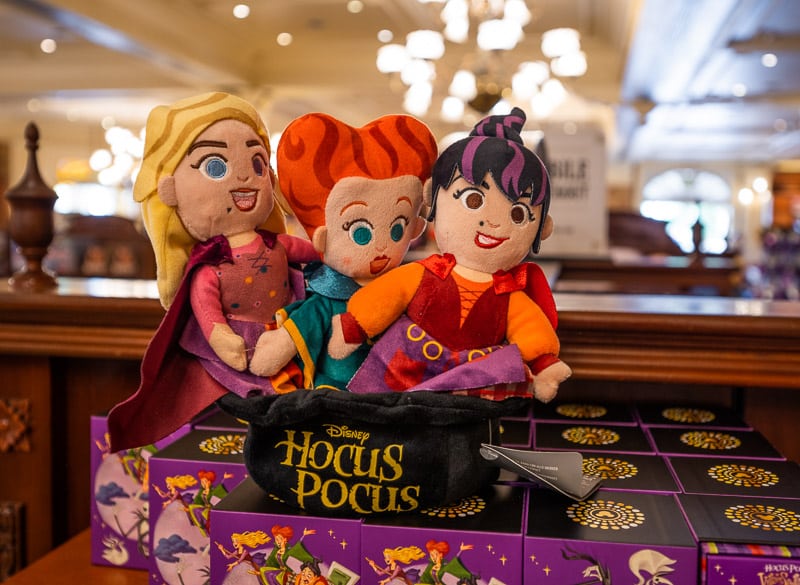 I have no clue what this is supposed to be. Maybe it doesn’t “do” anything and is just stuffed animals? You could probably use the cauldron as a hat in a pinch. 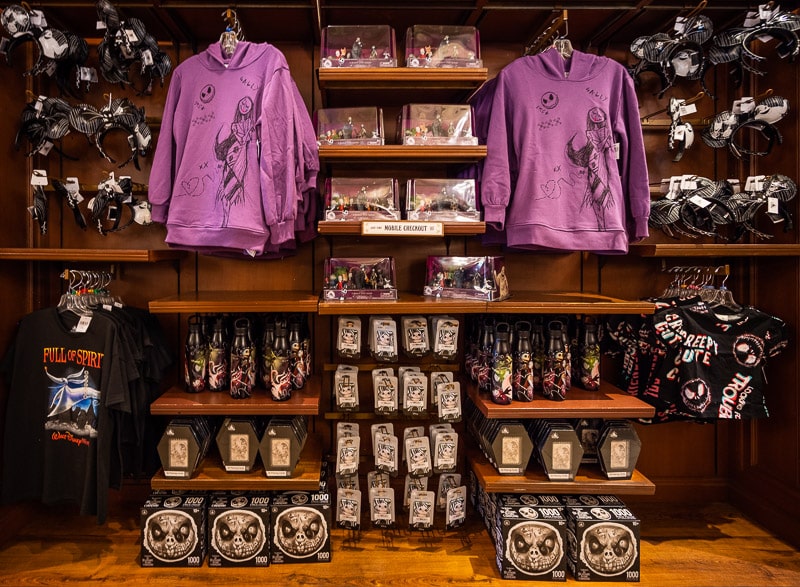 Lots of Nightmare Before Christmas merchandise on this shelf.

I’m not going through this individually since I assume it’s not new. (That, or it’s a variation of the same designs they release annually for this franchise.) Not my cup of tea, but savvy of Disney to go after market share from Hot Topic. If you spend $40 on other stuff, Walt Disney World will give you the privilege of buying this tote for $24.99.

Since those friendly pumpkins are posing the question, I’ll bite: this is definitely trick, not treat. This Nightmare Before Christmas merchandise either requires viewers wear 3D glasses or there was a miscalibration at the factory.

I have no clue how much any of this costs, but it’s definitely too much. Sarah is a fan of this style of Mickey Mouse pumpkin hat, which costs $35.

The other hat appears to depict a melting marshmallow re-enacting a famous scene from Raiders of the Lost Ark. I have no clue why he’s smiling. This one will set you back $30. 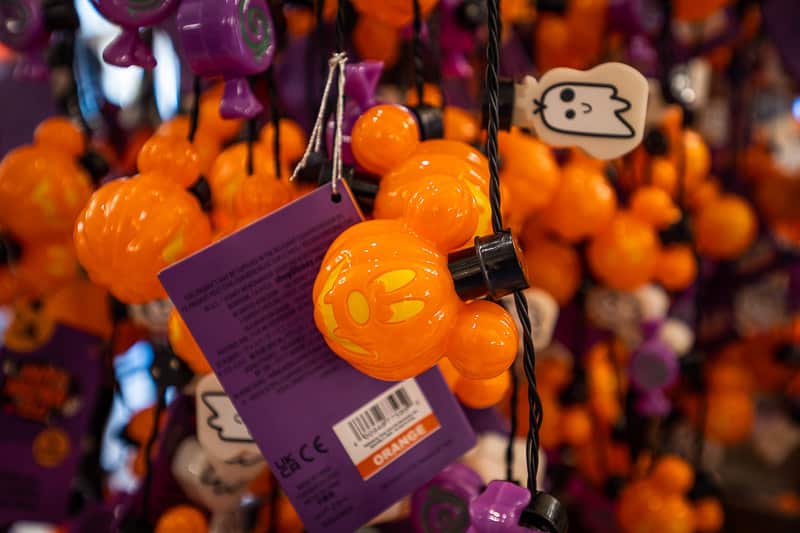 Currently, that means $20. (For what it’s worth, a few of these products don’t have actual prices listed…so don’t be surprised if they increase between now and October 2022.) 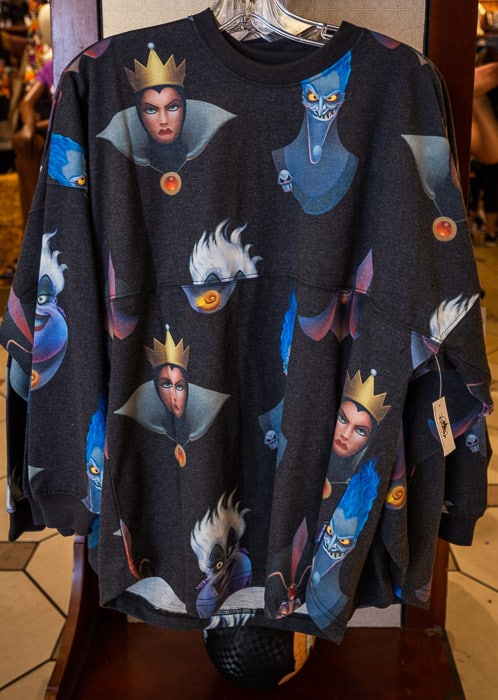 Finally, trick or treat buckets and other assorted stuff by the door.

What do you think of the Halloween 2022 merchandise at Walt Disney World? Anything you’ll be buying, or is this too expensive and/or not your style? Do you agree or disagree with my commentary? Any questions we can help you answer? Hearing your feedback–even when you disagree with us–is both interesting to us and helpful to other readers, so please share your thoughts below in the comments!