For 2016, Hong Kong Disneyland has a bunch of new Halloween offerings, including the Mickey & Friends Costume Party, Mickey’s Halloween Time Cavalcade, Villains Night Out Parade, the Nightmare Experiment haunted house, and Villains Garden trick or treating. (All of this is based upon our reading of the translated press release, so check it out for yourself.)

I found Haunted Halloween to be no slouch, with two haunted house-like walk-through attractions in Graves Academy and Revenge of the Headless Horseman, a 20 minute show called “Horrors of the Amazon,” Autumn Festival games in Grizzly Gulch, Halloween meet & greets, and more.

The highlights for most guests are clearly the haunted houses, with everything else playing second fiddle. Mystic Manor is also especially popular at Halloween, much like Haunted Mansion in the US sees a slight spike in popularity. While Haunted Halloween at Hong Kong Disneyland might be leaner than it used to be, it’s still a pretty awesome event.

In this post, we will discuss each of the Halloween offerings for Hong Kong Disneyland’s Haunted Halloween, offer our tips, and share some photos from the festivities from the year we attended…

There are rules for the costumes, but these appear very lax, with signs (see photo below) informing guests that they couldn’t bring wagons or brooms into the houses. Meaning, wagons, swords, brooms, etc., are all allowed, but just not for costumes. (And you know if it’s on a sign, it’s because there has been an issue before. Perhaps a guest reflexively hit an actor in a house with a broom…or wagon?) 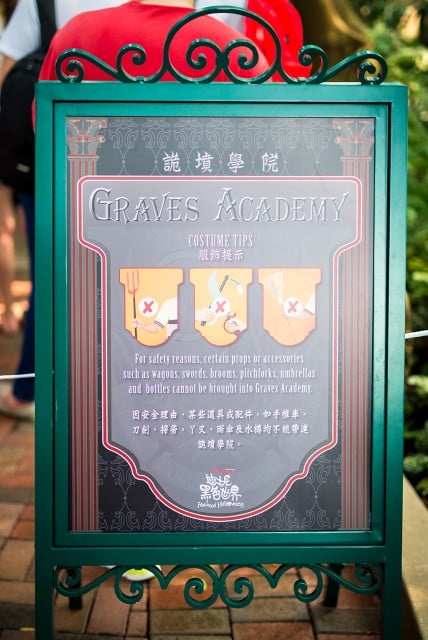 So it would appear that just about anything that doesn’t meet that threshold is tolerated. Due to the humid climate at Hong Kong Disneyland and the space it’ll take up in your luggage, I don’t encourage anyone to wear a costume–unless you’re really into it.

I did not really see many guests in costume, but in general, the costumes were generally more gruesome and generic. One of my favorite things about Mickey’s Not So Scary Halloween Party at Walt Disney World is the elaborate and creative costumes some guests create–many of which pay homage to the parks. There’s none of that in Hong Kong. Presumably, this is because the park there is not even a decade old, and most guests there haven’t had the time to form the kind of sentimental bond with the parks that US guests have. 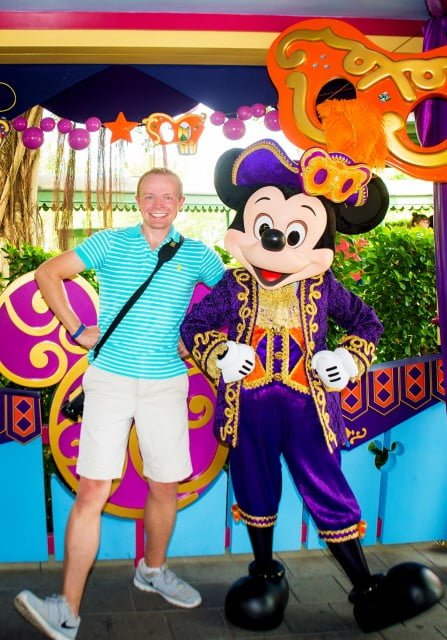 Costumed guests, and anyone for that matter, can meet with the Fab Five in their Halloween attire at the Fantasyland Masquerade Ball. This is a lot like the now-defunct Camp Minnie-Mickey in terms of layout, except located in Fantasyland. 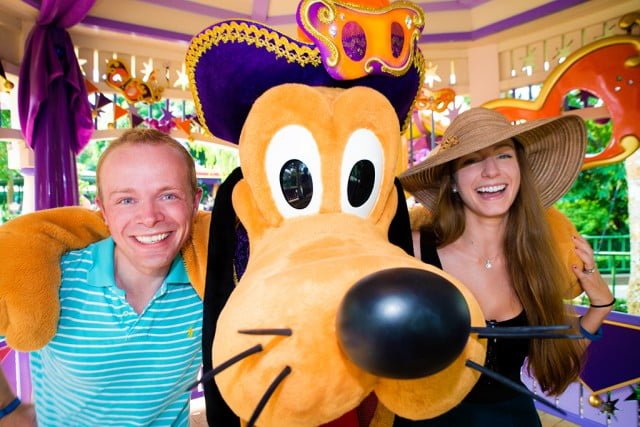 These were the coolest and most elaborate costumes I’ve ever seen for the Fab Five, so we decided to get photos with all of the characters here (except Minnie). All of the characters were really exuberant, but our interaction with Pluto was especially good. As soon as he put his arms around us, he rushed the camera! 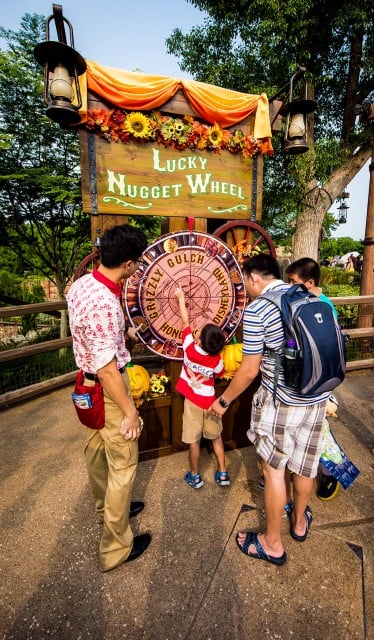 Aside from these meet and greets, the only Halloween entertainment aimed at kids is the Grizzly Gulch Autumn Festival, which consists of a few old-fashioned “pitch and toss” style games. If you win, you receive a prize. Spoiler alert: the prize is a sticker and everyone wins.

I suppose arguably, the photo ops at the edge of Toy Story Land, but these things are so freaky that I’m not even sure they’re aimed at adults! 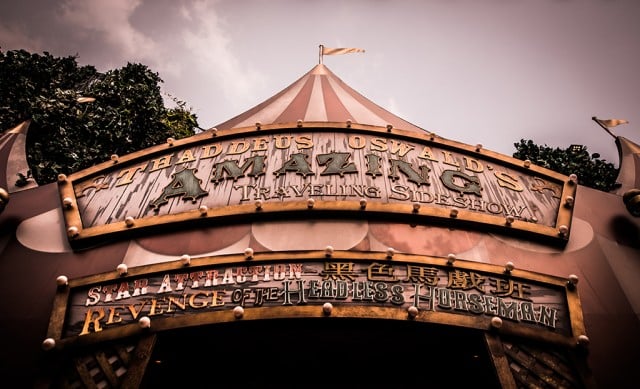 One of the typical highlights of Haunted Halloween is the walk-through haunted houses (although Hong Kong Disneyland never refers to them as this, it’s the most apt description). Revenge of the Headless Horseman is the mainstay of these. The premise of this is that it’s a traveling circus sideshow, with a bunch of grotesque freaks leading up to an encounter with the Headless Horseman. Unfortunately, no photos are allowed inside either of the houses.

Revenge of the Headless Horseman was very well done, and the quality and attention to detail of a temporary attraction is quite astounding. It’s fun and there are definitely some scary moments along the way. We lined up for this immediately after Graves Academy, which we did on the first day of Haunted Halloween right as it opened. Our wait for Revenge of the Headless Horseman was about 30 minutes or so. In the early evening, it exceeded an hour, and by the end of the night it was a virtual walk-on (walk-in?). This was consistent throughout our time at Hong Kong Disneyland, so the moral of the story is to do it at the end of the night.

Graves Academy is the definite highlight of Haunted Halloween at Hong Kong Disneyland. Holy cow. The premise here is that Principal Graves at Graves Academy is recruiting students and turning them into evil creatures trapped in the rooms. Guests walk through the school, visiting classrooms, the lunchroom, gym, and more. This is a really high quality attraction with lots of details and things you could stop and look at…if only you could stop.

This was the first thing we did during Haunted Halloween, and it ended up being my favorite thing. It has some very startling moments, and there is a ton of suspense throughout, which is even better than the scares, I think. Frankly, I’m shocked this exists…

I had heard Haunted Halloween is aimed at the ‘young adult’ demographic as opposed to kids before I went, but I didn’t quite believe it until Graves Academy. I went in expecting a mildly spooky atmosphere, and it far exceeded my expectations. Sarah, on the other hand, ended up closing her eyes most of the time and holding hands with a random group of guests behind us. (Yes, really.) 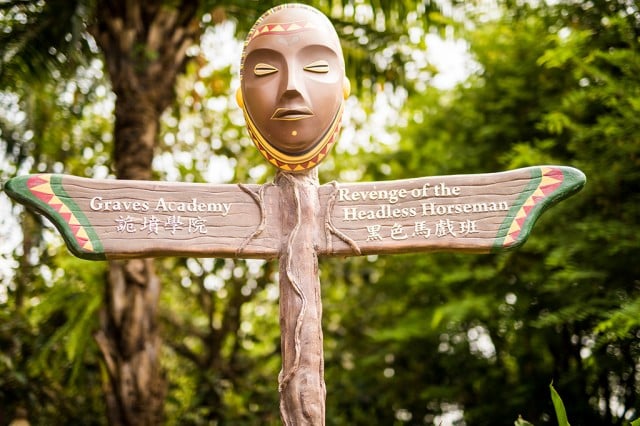 I would love to see something like this at Walt Disney World for Halloween, but I know there’s a zero percent chance of that happening. The line for complaints at Guest Relations would be longer than the line for Toy Story Mania. One of the reasons Alien Encounter closed was because of complaints (despite clear warnings). Even if Graves Academy were only open for a hard ticket event aimed at adults in the Studios and dozens of warnings were put up, parents would still take their kids into it, and would still complain about their own mistake because “accountability” is a largely foreign concept here. There were many complaints about the Oogie Boogie show (despite warnings) during the Villains Unleashed hard ticket event, and Graves Academy makes that look like a Hello Kitty stage show.

Graves Academy justifiably had the longest wait of any attraction in Hong Kong Disneyland for almost all of the day. We rope dropped it and waited 45 minutes. Lines exceeded 2 hours at some point. Even at the very end of the night, I waited 15 minutes. Sarah refused to do it a second time, so be warned–this is legitimately scary (I’d only consider it mildly scary, but what do I know), not just “Disney scary.” I found it scarier than anything at Halloween Horror Nights in Universal Studios Japan, even if there was no gore.

The other entertainment highlight (new for this year) is Horrors of the Amazon, a stage show featuring Jonas Brisbane who is portrayed by Hong Kong celebrity (?) Power Chan Kwok-pong, a Jungle River Cruise Skipper who wants to join S.E.A. (yes, a S.E.A tie-in!), who recounts his exploits in the jungle during a 20-minute show inside Theatre in the Wild as he brings out some of bizarre creatures he captured.

He’s sort of like a less devious Harrison Hightower who collects freaks instead of idols and artifacts, with the storylines between Hotel Hightower and Brisbane being very similar.

At least, what I could ascertain of it. The show is entirely in Cantonese, so I didn’t understand it all, but there are some slides during the show in English, and it’s pretty easy to piece together the plot based on the visual presentation. Like almost every Disney show, the plots are usually simple enough and the visuals strong enough that language is no barrier (and considering the number of international guests every park gets, this is in large part the case everywhere, and out of necessity).

Anyway, this features the typical “something goes terribly wrong” plot twist, and in addition to all of the freaks escaping into Hong Kong Disneyland (more on this below), Brisbane is no match for one of the freaks he somehow caught. Think of this freak as the Shiriki Utundu to Brisbane’s Harrison Hightower.

Despite not understanding the Cantonese dialogue, I really enjoyed this show. The production value was strong, especially for a seasonal show, the acting was good across the board, and the costuming of the freaks and explorers was top-notch. I suspect it cost Hong Kong Disneyland a pretty penny to put on this show, and I can forgive the lack of a Halloween parade and decorations on Main Street if it meant getting this show instead. You can watch the show for yourself here.

Once the freaks escape Horrors of the Amazon, they head out into dark corners of the park for Sideshow Carnival Extraordinaire, which is essentially a series of meet & greets.

These were awesome. The light was really nice (albeit not for guest photos!) and foreboding, and these freaks looked really cool. 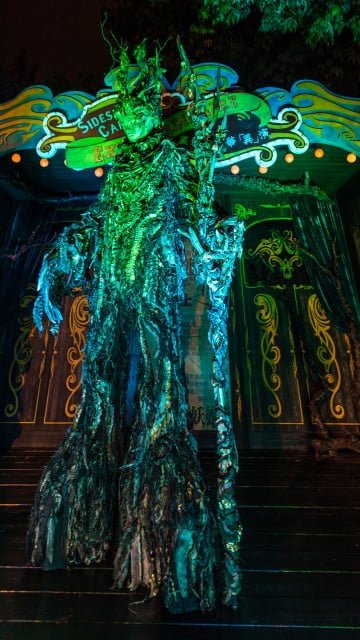 My favorite was the Amazing Bat Boy (pictured three photos above in Horrors of the Amazon). 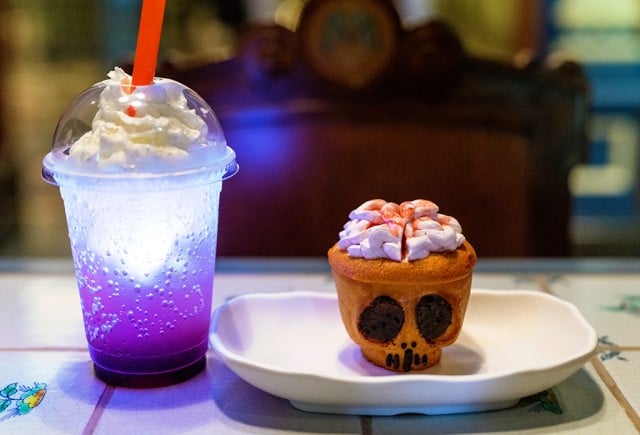 As always, there was also plenty of Halloween merchandise and seasonal snacks to buy. I’ve found that Hong Kong Disneyland is one of the best parks for merchandise, both in terms of quality and price. Above is the “brains” cupcake at the Explorers Club Restaurant. The seasonal foods were also pretty cool, albeit with typical Disney prices.

As mentioned at the beginning of the article, there was no parade this year because Disney Paint the Night Parade debuted on the same night the Halloween season kicked off. This also meant that Main Street was decorated to promote the new parade. A bit of a letdown, but at least I got to see the new parade…?

Overall, Haunted Halloween at Hong Kong Disneyland was a ton of fun. With a lack of Halloween decorations, the park did lack the general Halloween ambiance that I expected, but the entertainment highlights all packed a huge punch and, again, were included in the price of regular admission! It will be interesting to see whether the Halloween parade returns next year once the Paint the Night Parade isn’t as new, and if they are able to bring back the Horrors of the Amazon show. If you have the chance or are visiting Hong Kong Disneyland sometime in the fall, I highly recommend making it happen over a weekend so that you can see all of the great seasonal entertainment. Just be responsible with what you allow your kids to see!

If you enjoy our posts from Hong Kong Disneyland or any of the non-US Disney Parks, please share via social media or leave a comment to let us know you find these posts interesting or helpful. Far fewer people read these international posts as compared to Walt Disney World or Disneyland content, and although these are my favorite posts to write, sometimes it feels like I’m talking to a wall. Consider sharing this post or leaving a comment your act of charity for the day! 😉

What do you think of Haunted Halloween at Hong Kong Disneyland? Do you think it looks/sounds too scary, or would you like to see something like this in Walt Disney World or Disneyland? Share any thoughts or questions you have below in the comments.