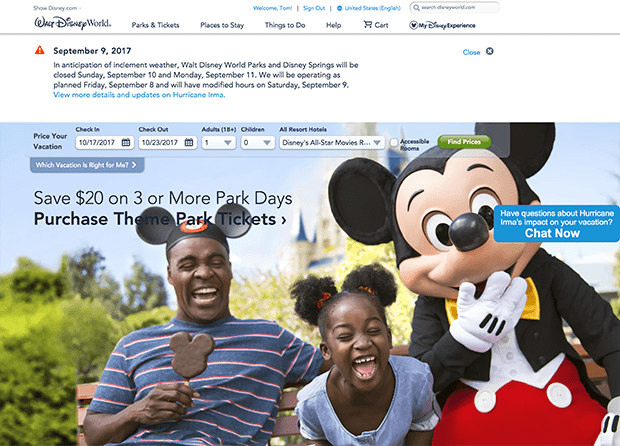 For starters, if you have a flight arriving into Orlando Friday or Saturday, reschedule. Of paramount concern is safety, and it’s simply not worth the risk. Beyond that, you will be out several days of your vacation, as the parks will undoubtedly close–probably early on Saturday, completely on Sunday, and to some degree on Monday. It will not be a “vacation,” in any sense of the word. Walt Disney World is normally great at maintaining the illusion of the ‘bubble’, but this is absolutely real life.

We arrived at Walt Disney World early this week and were scheduled to be here until next Monday, but have cut short our trip to get out ahead of the storm are stuck here through the storm as our earlier, rescheduled flight is probably going to be canceled and there are no alternatives. Regardless of Hurricane Irma’s intensity when it reaches Central Florida, the approaching storm is terrifying to us. We’d rather play it safe, especially after seeing the devastation this hurricane caused in Barbuda and St. Martin. (We would have left even earlier, but the availability of outbound flights out of Orlando has been next to nothing for the last several days; if you’re here and haven’t already booked, it’s too late.)

While we have been keeping track of Hurricane Irma with updates in our Tips for Storm Season at Walt Disney World post, which is better aimed at making the most of your vacation time on normal rainy days during this time of year…this is anything but a normal storm. We wanted to post some additional info and warnings here out of an abundance of caution, particularly for those of you tourists (like us) who have no firsthand experience with hurricanes.

Currently, the eye of Hurricane Irma forecast to reach Southern Florida by Sunday, September 10, 2017 as a Category 4 storm. Central Florida is expected to begin feeling tropical storm force winds Saturday night, according to the National Hurricane Center. The storm will continue moving north towards Orlando early Sunday and into Monday, with models differing as to the extent it will impact the middle of the state.

Much of Florida is in the cone of uncertainty, with the eye of the storm hugging the east coast as it heads north. Florida Governor Rick Scott declared a state of emergency early in the week for every county in the state in anticipation of Hurricane Irma possibly making landfall, which was upgraded to a Category 5 hurricane before its approach to Florida with sustained winds over 175 mph.

As Governor Scott indicated, this storm is wider than the state of Florida, and every area of the state will experience extreme weather, no matter how far from the eye of the storm. The storm also likely will impact Georgia, South Carolina and North Carolina.

You can find the latest updates on Hurricane Irma on the National Hurricane Center’s website or on your weather station/website of choice. While computer models are differing slightly on the details, the prevailing theme among forecasts is that this will be the worst storm to hit Florida in decades. We don’t purport to be meteorologists, but all you have to do is turn on the television to understand just how serious this is.

Hurricane Irma could end up drifting east from the coast, but Florida is certain to be in its cone, regardless of last-minute shifts. Not treating this as a serious threat would be foolish. 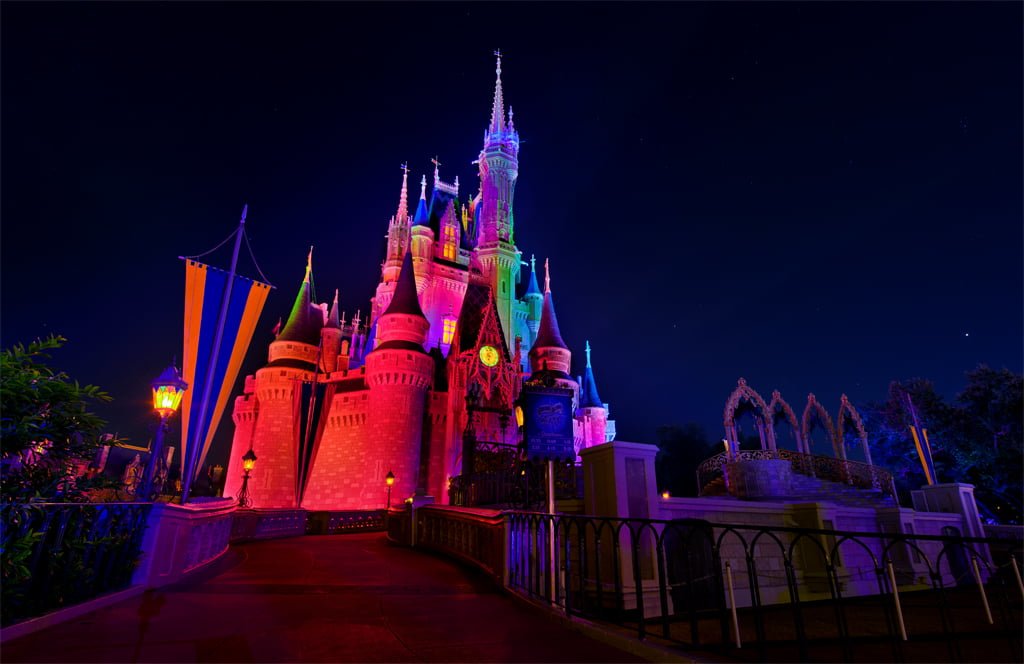 Hope everyone was safe during the storm, and those affected Floridians are starting to recover!

September 11, 2017 – 12 pm UPDATE: After an eventful and loud night, Hurricane Irma has passed Orlando. The curfew is still in effect until this evening, but Walt Disney World is allowing people to go out and about within their resorts. In surveying the area around Crescent Lake, it appears there’s minimal damage. There are a lot of branches and leaves on the ground, and a couple of trees have blown over, but nothing major. All things that can be cleaned up or repaired within a few days.

In-room televisions still indicate the parks and Disney Springs will be closed tonight. We anticipate everything will reopen according to normal operating conditions tomorrow. If you have a trip booked for later this week or next, you have nothing to worry about–it’ll be business as usual.

September 10, 2017 – 11 am UPDATE: Hotels have buffets, boxed lunches, and select resorts also have in-room dining available. You can also find daily entertainment schedules for each of the resorts in their lobbies. As long as there is no county-imposed curfew, hotel entertainment will continue per these schedules. (Unscheduled character meet & greets are also occurring.)

Orange County, Florida has a local curfew beginning at 7 p.m. tonight, meaning guests at hotels lacking internal hallways will be confined to their rooms beginning at that time. If you’re at one of these hotels, plan accordingly and grab food before then!

Beyond this and the other announced closures, Walt Disney World will effectively enter its hurricane mode, with only a skeleton ‘ride it out’ crew of Cast Members around the resorts. Last year, long lines were reported for boxed lunches at many resorts. We don’t know if that will be the case this year, but we would highly recommend anyone at Walt Disney World now stock up on various supplies (cereal, microwavables, etc.) from the general stores at their resorts, or from the Speedway in the Crescent Lake area (they still have good options and reasonable prices).

In addition to providing necessary guest services, entertainment will be offered at certain resorts on Sunday and Monday, including character meet & greets, among other things. This will primarily be offered at resorts with interior hallways, as those in other resorts may not be able to leave their rooms during the storm.

September 8, 2017 – 3 pm UPDATE: Walt Disney World just announced that it would be closing its parks early tomorrow, and would remain closed through Monday, September 11, 2017.

September 8, 2017 – 9 am UPDATE: Fort Wilderness will be relocating guests, with those staying at the resort needing to leave the resort by 2 p.m. on Saturday, September 9, 2017. Following that, Fort Wilderness will remain closed through at least Sunday (more likely Monday). This includes all restaurants and entertainment at the campground, including Hoop-De-Doo Musical Revue and Mickey’s Backyard BBQ, which have all showings canceled through Monday.

The Spirit of Aloha dinner show at Disney’s Polynesian Village Resort has been cancelled for Saturday, and likely will be canceled for Sunday in the very near future. We have not yet heard about the Poly Bungalows, but normally, those guests are encouraged to move to accommodations at other resorts.

Walt Disney World has canceled Night of Joy for September 9, 2017 and Mickey’s Not So Scary Halloween Party for September 10, 2017 at Magic Kingdom. Additionally, the Aerophile balloon at Disney Springs is now closed in preparation for Hurricane Irma, and Blizzard Beach will be closed beginning September 8, 2017.

Walt Disney World has issued a notice on the main page of its website, which provides info on the current status of Hurricane Irma closures and advises guests to monitor news outlets for the latest weather information.

Although it is not explicitly mentioned on that page, Walt Disney World is waiving cancellation fees for guests with travel dates that include the next week. (Some pre-paid experiences—like Cinderella’s Royal Table—are not officially included in this cancellation fee waiver policy, but Disney will issue refunds there, as well.) Unofficially, they are going beyond Walt Disney World’s hurricane cancellation policy. This likely has not been officially announced because wait times on the phone for Guest Services have already been into the hours. 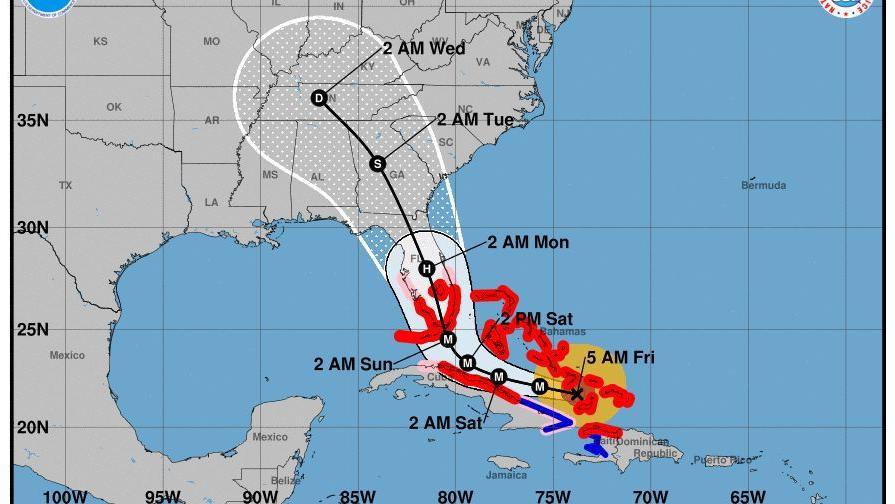 It’s a bit concerning that so much is ‘business as usual’ at Walt Disney World. It has been a bit surreal to walk around Walt Disney World where everything feels just like it normally would–happy go lucky and carefree–and then come back and turn on the news in our room and hear about the potentially catastrophic hurricane approaching.

As the majority of guests are from out-of-state, likely inexperienced with hurricanes, and may not be actively monitoring the news during their visit. Providing guests with flyers in-room, messages on their phones, or pop-ups based on location in My Disney Experience seem appropriate. They don’t need to induce pandemonium, but encouraging adequate preparation seems like a smart move.

On the one hand, it’s not Disney’s responsibility to keep guests apprised of the news and ensure that people make the appropriate plans to be safe. On the other hand, Disney has built its reputation on being a brand that families can trust, and people do that to extremes. With park operations being total normal and no active information sent to hotel guests, they are lulling people into a false sense of security.

If Hurricane Matthew last year was any indication, lines will be long at the resort food courts to purchase boxed lunches and other food starting on Saturday afternoon. If you’re at Walt Disney World now and are unable to leave Florida before the storm, you should try to stock up on food now to avoid the crowds later–and have better options.

Moreover, please be incredibly courteous to front-of-line Cast Members. Walt Disney World will be operating on a skeleton ‘ride it out’ crew over the weekend–and for good reason. These people have families and are concerned about their safey. At this point, having a ‘magical vacation’ is understandably no one’s top priority.

Again, if you are scheduled to visit Walt Disney World in the next several days, we’d strongly encourage you to rethink those plans. We hear a lot of talk about the hurricane safety, and how Walt Disney World hotels are rated to withstand high-intensity winds and storms. That very well might be true, but you’re still undoubtedly safer in Chicagoland or New York (or wherever) during Hurricane Irma than in Central Florida. During a hurricane, anywhere without hurricane force winds is safer during a hurricane than buildings rated to withstand hurricane force winds. Why risk it?

Beyond that, with Orlando International Airport already announcing it will cease operations on 5 p.m. Saturday, and that many flights will be cancelled and delayed, you may have a difficult time getting to Florida in the first place. In short, if you have the ability to reschedule, that is unquestionably the best option.

We will continue to monitor Hurricane Irma’s progress and update this post as more information becomes available. If you’re currently at Walt Disney World and receive and updates directly, please share in the comments.

Are you currently at Walt Disney World or Central Florida? Have you visited during past hurricanes? Any additional info, thoughts, or first-hand experiences to share regarding Hurricane Irma? Any questions? Post any of your thoughts, questions, or anecdotes in the comments.