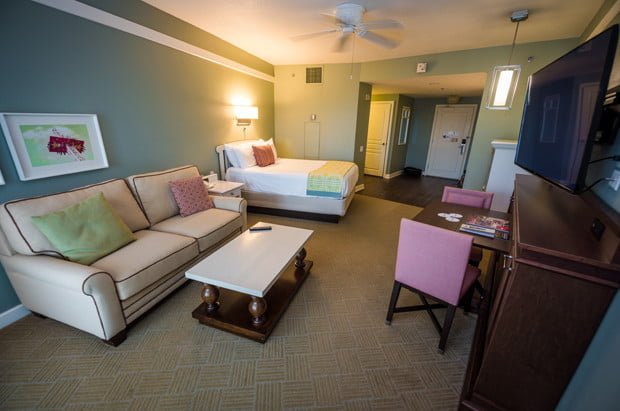 As part of another whirlwind resort tour (six hotels over the course of our trip), we were checking out of Coronado Springs Resort and into the BoardWalk Villas on Friday. This 1-night stay at BoardWalk was booked a couple of days earlier by our friends at DVC Rental Store (as soon as we knew we’d be staying at least until Saturday), so at least we were set for part of our extended stay.

At that point, the airport still had not announced an earlier closure, but it had leaked out on social media that they’d be closing early on Saturday. With that in mind, we decided to take a Minnie Van from Coronado to BoardWalk early in the morning and talk to someone at the front desk.

Even a couple days ahead of the storm, there were several managers assisting with check-in at BoardWalk Inn. We told one of them about our dilemma, they advised us to book through Monday and just cancel whatever we might not need on Saturday if our flight happened.

They gave us the option to pay cash at a 40% off discount or use Disney Vacation Club points. Switching to another resort with a cheaper rate was also an option. We were advised that literally every resort on property had availability, as most guests were canceling their trips. Disney had also blocked out the hotels from online booking so they’d have the capacity to accommodate guests leaving coastal areas like Miami.

As any regular readers of the blog know, we’re normally pretty frugal, and the low rates at Port Orleans French Quarter and Pop Century were really appealing. However, I’m also hyperactive, and I tend to go stir crazy being cooped up in a room, so we figured a hotel with interior hallways was a much better option. We opted to stay put at BoardWalk, using DVC points for the duration of the stay.

It took the back office a bit of time to get the details with our DVC rebooking squared away, so we sat in the lobby and waited. While the front desk was really busy, it was mostly with guests leaving early. The front desk was fully staffed and Cast Members were doing an exceptional job accommodating everyone. “Walt Disney World Cast Members doing an exemplary job” would be the theme of the weekend, and after our experiences with Delta, this was a breath of fresh air. 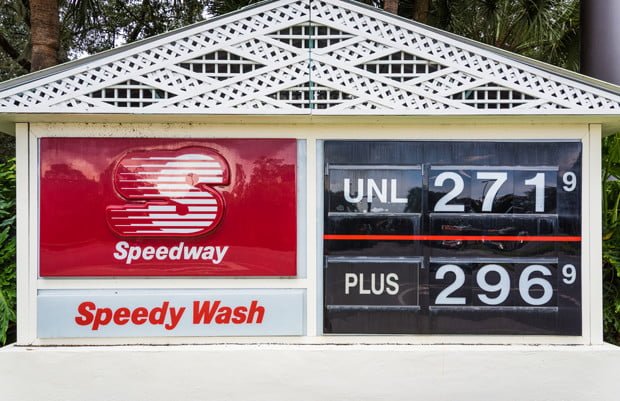 Realizing there was at least a 50/50 shot our flight would be cancelled, we walked over to the Speedway gas station and grabbed some supplies. Seeing that they had gas, we also toyed with the idea of renting a car from the Swan & Dolphin and doing a one-way rental to Atlanta. With too many unknowns, we ruled this idea out after a little deliberation.

This Speedway (formerly the Hess Station) had cereal, water, and snacks, mostly. We normally recommend this as an option of last resort in our Tips for Buying Groceries at Walt Disney World post, but in this case, it was pretty much our best option. We didn’t anticipate any of this being strict necessity, and were reassured by Cast Members that we’d be taken care of at the hotel, but we had concerns about long lines and high prices, so we figured it was better to play it safe. 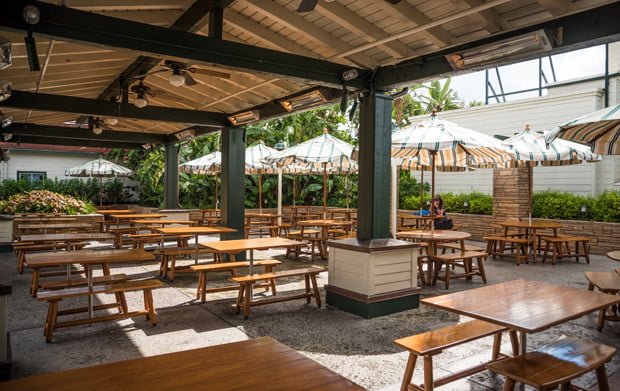 After that, we headed to Disney’s Hollywood Studios. Halfway through our day, the airport provided an update that it’d be closing early, effectively cancelling our flight.

We immediately got on the phone with Delta and spent the next several hours in this corner of the Sunset Ranch seating area. 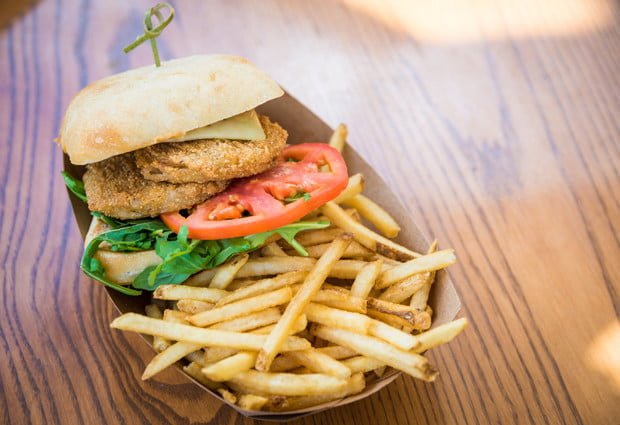 There were two upsides to this: I discovered a shocking-good Fried Green Tomato Sandwich on the menu here, which is probably the best counter service item available in Disney’s Hollywood Studios.

The second “upside” is a backhanded one…at least we were at Disney’s Hollywood Studios and not a better park while dealing with this?! 😉 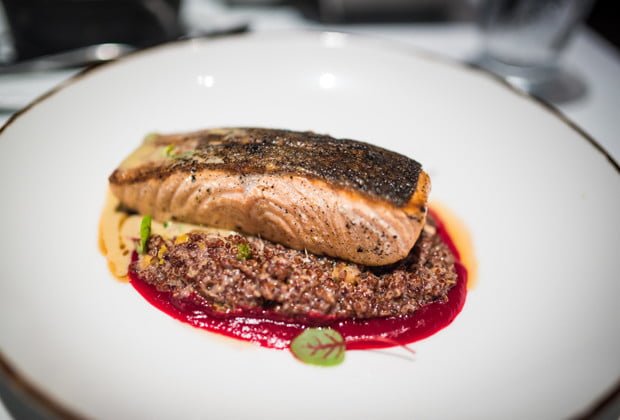 Continuing on the topic of food, we opted to dine at Todd English’s bluezoo at the Swan & Dolphin that night, taking advantage of their Magical Dining Month menu. It was an excellent meal, rivaling the meal I had at Flying Fish earlier in the trip. (Full review to come.)

Following dinner at Todd English’s bluezoo that evening, we did the parks the following morning. Since the parks were going to be open anyway, we decided to go, but leave midday so we weren’t indirectly causing any Cast Members to be working when they could possibly be leaving early otherwise. 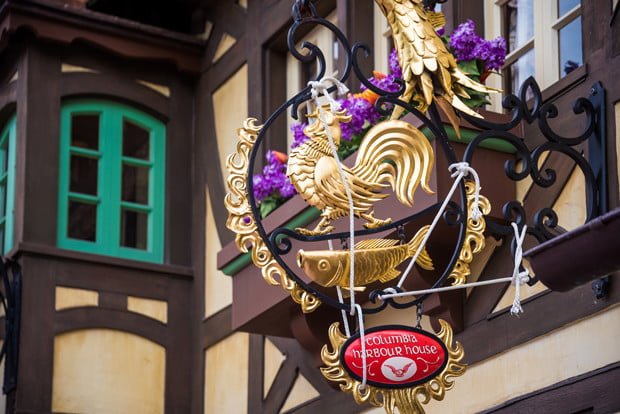 We started in Magic Kingdom, before hopping to Epcot for all of about an hour. It was interesting to see the various ways the parks were securing loose objects. Lots of cellophane and rope!

One of the reasons for going in the first place was our very “clever” idea to order a Mezzo Metro pizza from Via Napoli to go, so we’d have something to eat for the next couple of days. To our surprise, Via Napoli wouldn’t sell us a Mezzo Metro pizza to go. I figured this was just a request they don’t regularly/ever get, so I asked to speak with a manager, who gave the same response: that we should dine-in, and have the entire thing boxed up after it arrives to our table.

This struck us as more than a little awkward, but we debated doing it anyway. Then the debate itself turned awkward, as we weighed doing this in the lobby of the restaurant as they were prepared to seat us. We decided against doing it, and then a few moments after leaving Via Napoli, realized we made a mistake, but we were too embarrassed to go back. 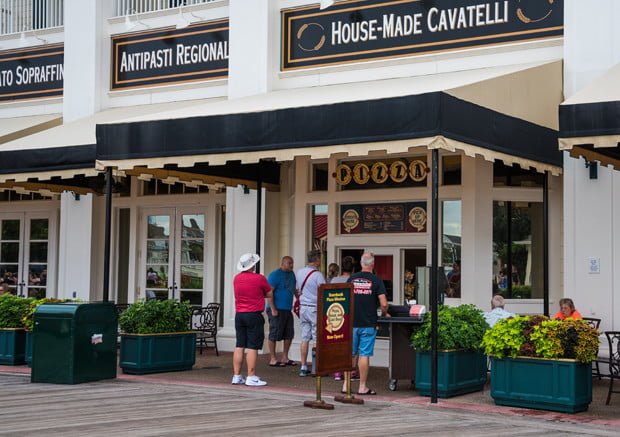 We weren’t the only ones with this not-so-clever idea, and there was a huge line at Boardwalk Pizza Window. The above photo is early on–later in the evening, it was exponentially longer. (Don’t worry, I’ll have a full review of this pizza later. 😉 ) 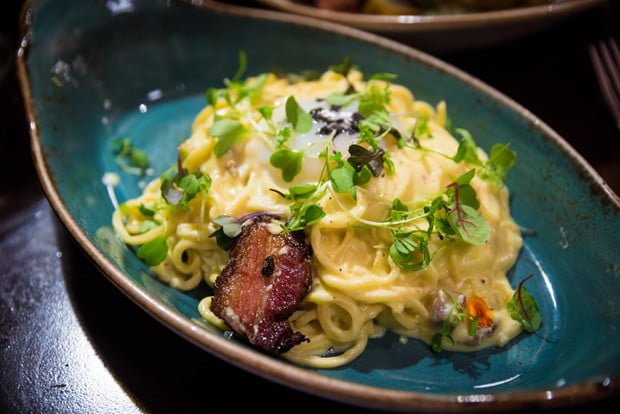 After obtaining that pizza, we had dinner at Trattoria al Forno. Not nearly as good as bluezoo the night before, but still very good. Again, full review to follow.

Walt Disney World was advising guests via the My Disney Experience App and in-room television messages to have a meal before returning to their rooms, which was good advice, but still had an unsettling quality to it.

Above is an awkward Facebook Live video we did to provide an update.

As you can see, it was another beautiful evening on the Boardwalk.

After that, we spent as much time as we could just wandering around the Boardwalk. Knowing we’d be in the hotel for the next 2 days, we wanted to get as much fresh air as possible prior to (potentially) being on lockdown. On Page 3, the storm arrives at Walt Disney World. Click here to continue reading…

99 Responses to “Our Experience with Hurricane Irma at Disney World”