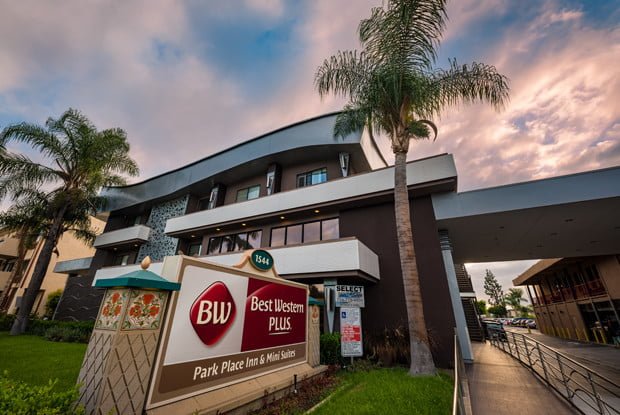 Best Western Plus Park Place Inn is the closest hotel to Disneyland and Disney California Adventure, directly across the street from the parks. This hotel review features room photos, thoughts on amenities, and pros & cons of staying at the Best Western, particularly as compared to other hotels adjacent to it on Harbor Boulevard.

Best Western Plus Park Place Inn really touts its proximity to Disneyland. Its website touts it as “the Closest Hotel to Disneyland,” it’s found on info inside the lobby, and when you turn on the in-room television, it’s a large graphic emblazoned on the screen.

In our Park Vue Inn Review, we noted that whether it or Best Western Plus Park Place Inn is a shorter walk to Disneyland really depends upon your room. The hotels themselves are nearly equidistant to the main entrance, with perhaps a slight edge going to the Best Western. Really, though, we’re talking about a difference of a dozen steps or so. Both hotels are directly across the street, and both are pretty evenly matched…

Our review of the Best Western Plus Park Place Inn has been a long time coming. Since we’ve started writing about hotels in Anaheim, we’ve had more reader questions about it than any other hotel. Only the Howard Johnson Anaheim Hotel & Water Park is even close in terms of interest level, with the Best Western presumably garnering so many questions due to its location near Disneyland and Disney California Adventure.

The proximity selling point of the Best Western really cannot be understated. It is literally at the Disneyland pedestrian intersection. You walk 60 seconds before passing under the Disneyland Resort archway and being enveloped by the jovial Disney Esplanade background music loop. From room door to park turnstile, the Best Western is at most a 10 minute walk. It’s the next-best thing to actually staying on-property. 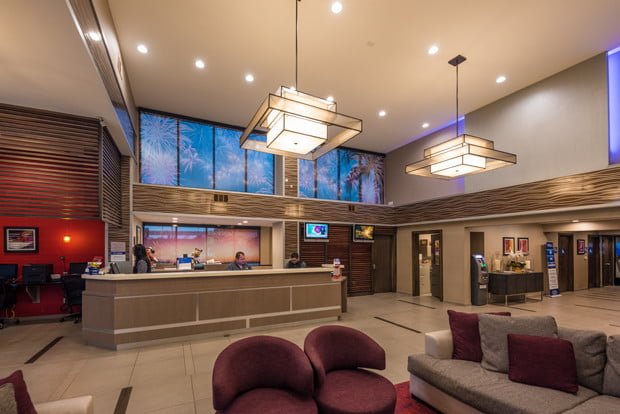 There are several hotels in this cluster across the street. Best Western Anaheim Plus Inn (a different Best Western) and Camelot Inn & Suites form the outer perimeter of the cluster, with Del Sol Inn, Anaheim Desert Inn, and Tropicana Inn also being very close options. However, it’s the two hotels in the dead center–Best Western Plus Park Place Inn and Park Vue Inn–that are directly across the street from Disneyland, and feel almost like on-site hotels once you cross the walkway.

Of course, being incredibly close to Disneyland and DCA makes no difference if the hotel is basically looks like Bates Motel Anaheim Inn. You might laugh, but the greater Los Angeles area has a history of shady hotels, and even higher end ones are supposedly haunted.

Only in the last decade has this area of Anaheim really turned a corner with ton of renovations occurring to older motels. Although in looking at the history of Stovall’s Best Western hotels in Anaheim, I think I’d much rather stay in the fantastic Googie style of the “Space Age Lodge at Disneyland” than a fairly generic Best Western. But I digress… 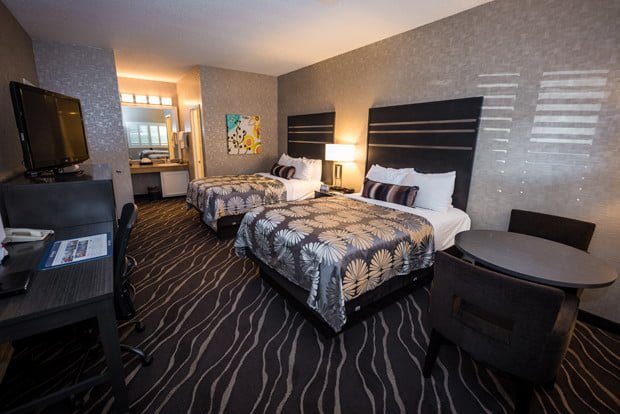 Fortunately, the rooms at Best Western Plus Park Place Inn are quite pleasant. The rooms are newly renovated, and make efforts at appearing chic and stylish. This is definitely welcome, as it makes the accommodations feel more upscale.

There are nice touches throughout the room, from the carpet to the paintings to the headboards. Equally as important, we found the hotel room to be clean and well-maintained. It also didn’t smell like it was freshly carpet-bombed with Febreeze or used copious amounts of cleaner to mask years of decay. Again, you might laugh, but in staying at 40+ Anaheim hotels, I’ve seen things you people wouldn’t believe. 😉 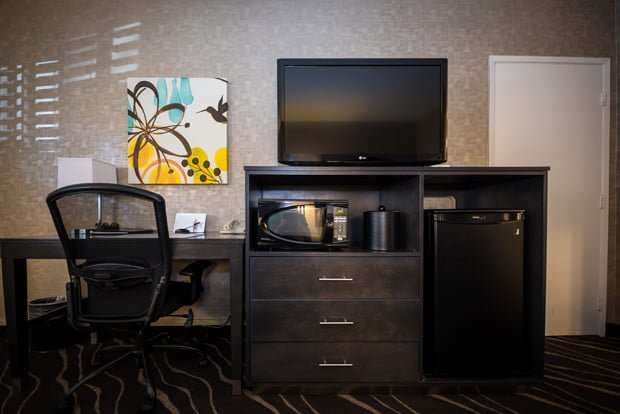 Size-wise, our standard room was about par for the course with other hotels at which we’ve stayed in this area. At some point in the future, we’ll probably return to stay in one of the mini-suites. Those cost a bit more, but they also are larger and have an additional sofa sleeper, meaning that they can sleep 6 adults.

We found the bedding to be comfortable and nice. I’m not sure whether these were pillow top mattresses, but they were incredibly plush either way. The sheets and pillows likewise felt really high quality. Best Western Plus Park Place Inn definitely gets high marks in terms of the room comfort. 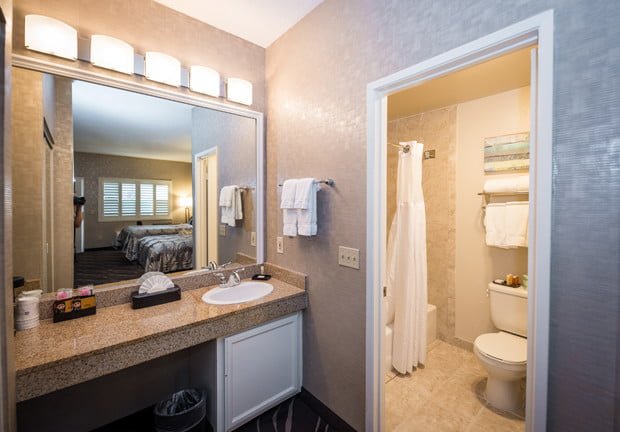 Of course, as with almost every Anaheim hotel, the wheels fall off when you get to the bathroom. The consistently-weak bathrooms confounds me. It’s as if the hoteliers of Anaheim all had an underground meeting decades ago, and formed a blood pact that all would keep their bathrooms forever crumby.

There’s nothing necessarily wrong with any of these bathrooms…there’s just nothing right about them, either. They are all consistently undersized and underwhelming. As I’ve written before, I could use a single stock photo for 75% of the hotels in Anaheim, and no one would ever know the difference. (I could not with this one, as Best Western hung a painting over the toilet, so I guess you could say this is an ‘artisanal bathroom.’ Fancy.) 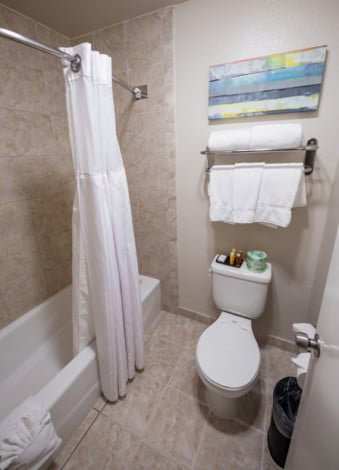 Granted, the Best Western is still a budget motel so this only goes so far, but it’s nice that it’s not stuck in the 1970s.

In fact, I’d go as far as to say that these are the nicest rooms in the cluster of hotels across the street from Disneyland. It’s a close call between this and (wait for it) Park Vue Inn, but I’m going to give Best Western Plus Park Place Inn the nod. 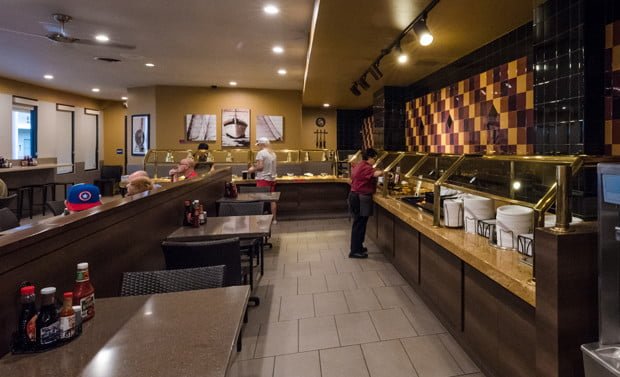 Throughout our stay, I kept noticing similarities to Park Vue Inn. The two are separated only by the international waters of Captain Kidd’s buffet, and that’s where the similarities really hit me the hardest. 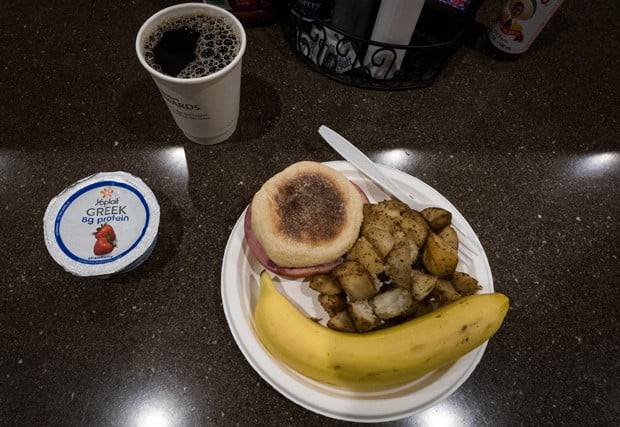 Also like the Park Vue Inn, the pool at Best Western Plus Park Place Inn fails to impress. Pools at these hotels don’t really matter to me since I never use them, but if you have kids and want to take a midday break for pool time, this will leave something to be desired. 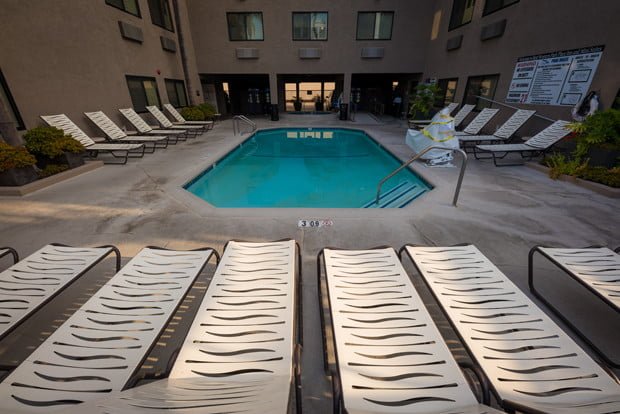 It might seem like that’s a point to Best Western Plus Park Place Inn, but it charges for parking. Anyone want to guess how much? No surprise: $10/night. Ha.

At this point, I’m convinced the management of these two hotels monitors what the other is doing, and they try to match one another. I don’t think this is too far-fetched of a scenario given the similarities between the two. 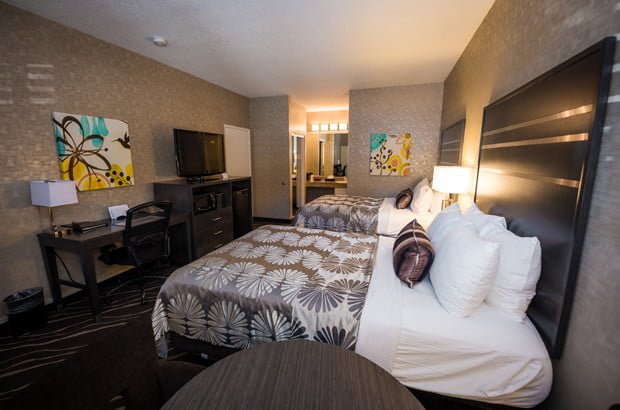 As we are in the process of updating our Disneyland-Area Hotel Rankings, I’ve given a lot of thought to the importance of proximity to the parks, price, rooms, and other amenities. After staying here, I was convinced that the Best Western Plus Park Place Inn was my new pick for #1 or #2. It was just a question of which spot it deserved.

The big question was whether the superior rooms and amenities were enough to overcome the added distance from the parks, and push the Residence Inn by Marriott at Anaheim Resort past Best Western Plus Park Place Inn. Spoiler: they are not.

I didn’t have to labor over this too long, as the very next day after our stay at the Best Western, we stayed at a hotel at the Anaheim Convention Center. After walking to and from that hotel a couple of times, including late at night after Mickey’s Halloween Party, I missed being across the street.

Staying at such a close hotel followed immediately after by a more distant one reminded me just how big of a deal the shorter walk is. This reiterated to me that proximity is of the utmost importance in choosing a hotel near Disneyland–and given reader responses to our recent inquiry, I think this is true for most people planning a Disneyland vacation. 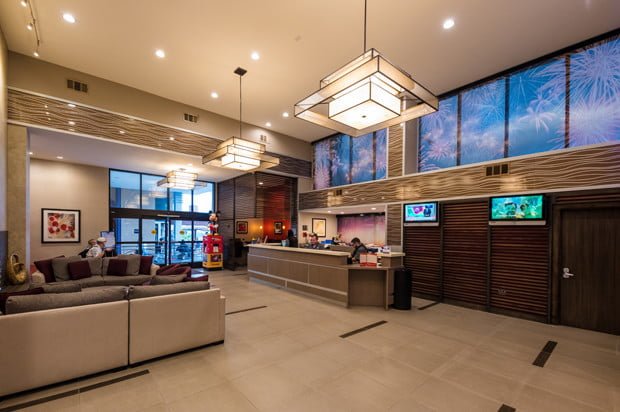 Obviously, reasonable minds may vary on this, but being directly across the street is a huge advantage for Best Western Plus Park Place Inn. This makes it easy for a midday nap, pool break, going back for snacks, or even grabbing my tripod and other lenses. The time spent leaving and returning to Disneyland or DCA is minimal from the Best Western, whereas the hotels past the Harbor/Katella intersection are much more of a hassle.

Since ‘reasonable minds may vary’ based upon what your party prioritizes, when I do update our rankings, I’ll include some circumstantial top picks beyond the numerical rankings, as there are at least 5 different hotels that could be #1 depending upon what matters most to you. However, that’s another topic for another day–beyond the scope of this Best Western Plus Park Place Inn review.

Overall, the Best Western Plus Park Place Inn is my new #1 hotel near Disneyland. In my estimation, it strikes the best balance of location, room quality, amenities, and price point to earn it that distinction. With that said, it’s neck and neck with Park Vue Inn in just about every regard, and I’m giving Best Western the nod primarily due to its newly renovated rooms. If you’re less concerned about the balance I’ve noted above–and particularly don’t care about being this close to Disneyland–there might be other, more compelling hotel options for you. For us, the Best Western Plus Park Place Inn is the perfect place to stay for a park-centric vacation, especially one that is likely to include midday breaks, or for those who want to save their feet.

Have you stayed at the Best Western Park Place Inn? What did you think of the location, rooms, and amenities? Do you agree or disagree with our assessment of this hotel? Any questions? Hearing feedback about your experiences is both interesting to us and helpful to other readers, so please share your thoughts or questions below in the comments!