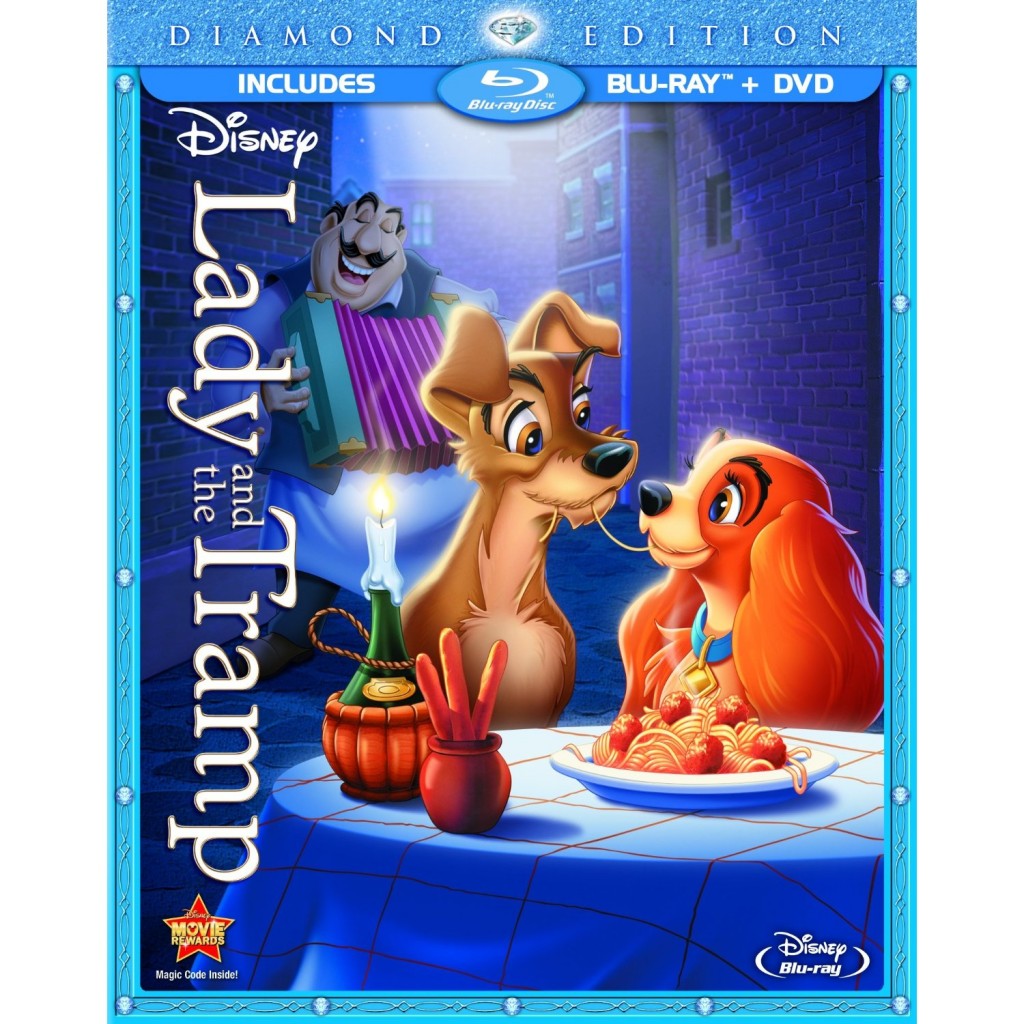 is the Spring 2012 release in the Disney “Diamond” line dedicated to restoring and re-releasing Disney animated classics on the Blu-ray format. It is the continuation of the Platinum line that saw many excellent DVD releases, and these spring and fall releases have become some of the most exciting times for fans of Disney animated films.

So, how did Disney do with this Blu-ray release? Honestly, at this point, reviews of the Diamond editions have become a bit superfluous. They all have been A+ quality, and Lady and the Tramp Diamond Edition is no exception. This release contains a Blu-ray copy of the film along with a DVD copy of the film.

You all (likely) know the story of Lady and the Tramp. “Royal” dog meets “scruffy” dog, said dogs from different social classes fall in love, dogs share spaghetti. Legal problems ensue as Lady joins Tramp, siamese cats sing a catchy song, and other dogs, humorously portraying their breed, make appearances in the film. Okay, perhaps this is reducing the film to its most basic elements, but I’m going to go out on a limb and assume just about everyone in the world has already seen this film.

Maybe I’m a bit biased towards dogs, but I think it’s a fairly underrated film from the Golden Era of Disney animation.

This film is from 1955. That cannot be reiterated enough. When the opening credits appeared, I was instantly reminded of the first Diamond Edition, the Sleeping Beauty: Two-Disc Platinum Edition Blu-ray/DVD Combo

. Much like the art and amazingly detailed backgrounds in that film, the Victorian backgrounds and quality of the frame by frame restoration here are amazing. The restoration team at Disney did an amazing job, as the picture is crisp, vibrant, and sharp throughout, and the color rendering is amazing. It’s also presented in the original theatrical aspect ratio of 2.55:1, whereas certain previous releases were in 2.35:1. For those thinking that the Blu-ray can’t look much better than the DVD since “high def” didn’t exist in 1955, you’re completely wrong. Since its early days, film has had a high-enough native resolution to benefit from Blu-ray. The quality here is amazing and then some.

Once again, Disney does not disappoint with the remastered DTS-HD Master Audio 7.1 surround sound track. The detail is amazing and the channels are used in a natural and non-distracting way. The score plays beautifully, as well. Once again, a flawless job by Disney on this.

All of the previous (excellent) DVD Platinum Edition extras are present here, along with a few new goodies thrown in for good measure. “Diane Disney Miller: Remembering Dad,” is the highlight of these. Although it’s a bit short, it’s wonderful seeing Walt’s daughter reflect upon her father. “Inside Walt’s Meetings” is an excellent audio commentary track with those involved in the creation of the film reliving how it came to be in meetings with Walt Disney. “Disney’s Second Screen,” a way to learn more about the film on your iPad or PC as the movie plays on your TV, is a great way to learn more about the film without interrupting the cinematic experience on your TV. Other extras in the Classic DVD Bonus Features include a 52-minute making-of feature, a 1943 storyboard of the film, Puppypedia, and color footage from the “Disneyland” TV show.