Lights of Winter was a Christmas light display that ran for Epcot’s Holidays Around the World at Walt Disney World. They were a series of archways that covered the walkway between Future World and World Showcase with over 30,000 lights that danced to the area’s music loop. This offers our photo tribute plus rumors about Lights of Winter’s return. (Updated October 4, 2020.)

Right now, Walt Disney World is in the midst of its phased reopening, and attendance is down dramatically. Independent travel experts are predicting that the industry won’t recover until 2023, and even the Walt Disney Company is forecasting a couple of years before attendance returns to pre-2020 levels.

While there’s no chance of the Lights of Winter returning for Christmas 2020–between physical distancing requirements and the time it would take to create the decor, it’s simply not feasible on such short notice. However, Christmas 2021 is another story entirely. 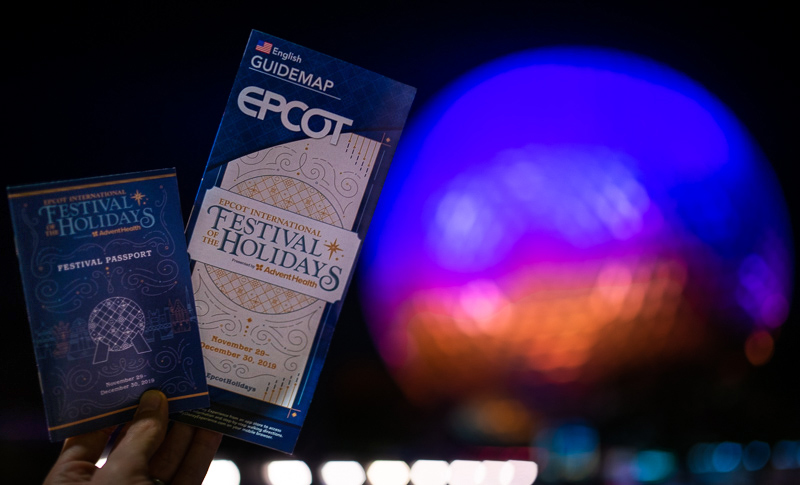 Not only will the current capacity caps and limitations be gone by then, but Walt Disney World will be looking for ways to lure back fans and other travelers in an effort to bounce-back from the impact of the closure and its aftermath. As discussed in Why Walt Disney World’s 50th Anniversary Should Be Big, it’s likely that Disney will deploy new entertainment, seasonal offerings, and other nostalgic favorites to help boost attendance during the milestone anniversary.

The Lights of Winter check all of those boxes. Not only that, but the display would be a nice aesthetic “Band Aid” on this section of the park, which is a maze of construction walls due to the Epcot overhaul that will eliminate Future World and replace it with 3 new neighborhoods. The Lights of Winter would actually help with congestion at this point, drawing guests back to the front of Epcot during the evening hours, which would help better distribute crowds in the park.

But this is just our pie-in-the-sky wishful thinking. It makes a lot of sense and would be a savvy decision, but there’s no reason to believe that the Lights of Winter will actually return until/unless Walt Disney World officially announces it. Not to burst any bubbles, but we think it’s better to have realistic expectations rather than set yourself up for disappointment.

Now, enjoy the rest of this Lights of Winter at Epcot tribute…

Official word from Disney via social media (posts that since seem to have disappeared) was that the lights were “obsolete technology,” which became a running joke among fans and was like salt in a wound. The rub is that Christmas lights aren’t obsolete technology–if they are, there are plenty of obsolete homes in every neighborhood in America each December. Not only that, but virtually every ride in Fantasyland should be shuttered for the same reason.

The reason given isn’t superficially plausible, and if there is some sort of obsolescence issue with the control system, a few more words clarifying what, exactly, was obsolete might have been wise. (Even then, control systems can be replaced.) I think what irritates fans the most is being talked down to by Disney. Does the Company truly believe its fans are so dim that everyone would blindly accept the obsolete technology excuse?

It’s even worse than the “we continually evaluate the various aspects of our operation and make changes and additions based upon feedback from our Guests” (possibly throwing in a gratuitous Walt Disney quote about change) justification for cuts made in the parks. Both of these responses lack any sort of substance, which is frustrating. I don’t think any fans expect detailed operational and financial rationale, but at least provide an actual justification. It could even be a carefully crafted marketing-speak, just so long as it actually says something.

Back to the Lights of Winter, while we will never know the real reason why the Lights of Winter were eliminated, there are some possibilities. Perhaps they were a victim of Disney’s green initiative, with the upgrade costs prohibitive in terms of Epcot’s annual budget. Maybe other upgrades needed to be made that were deemed cost-prohibitive. It’s possible that the Lights of Winter’s location in a main artery of the park caused excessive congestion issues, and operational headaches. Maybe the look of the Lights of Winter during the day was deemed an eyesore, and they were cut as a result.

Giving Disney the benefit of the doubt, I think either of these last two possibilities could be likely. We typically visit during Christmas at off-peak times, and even then, the walkway for the Lights of Winter was packed–I can only imagine how bad it got during Christmas week and leading up to New Year’s Eve. Likewise, for all of the beautiful nighttime photos of the Lights of Winter, what’s missing are the photos showing how ugly it looked during daytime hours.

Whatever the case may be, the disappearance of the Lights of Winter has created a void in Epcot’s Christmas lineup. We recently highlighted what Epcot does offer for the holidays, and it’s a pretty good list, but it’s missing that big, “breathtaking” draw. Something that is awe-inspiring, and leaves a real impression on guests. Sort of like a holiday “wienie.” In my opinion, every Disney theme park that I think does the Christmas season well does this.

Magic Kingdom has the Cinderella Castle Dream Lights. Disney’s Hollywood Studios has Sunset Seasons Greetings. Disneyland has Sleeping Beauty’s Winter Castle and ‘it’s a small world’ holiday. Tokyo DisneySea has Colors of Christmas. Disney California Adventure has World of Color – Winter Dreams. Arguably, Epcot does have this draw in Candlelight Processional, and while I enjoy Candlelight, it doesn’t fit the bill for me. It’s a great show if you have a meal package, but it’s not breathtaking.

In a perfect world where Epcot’s Future World actually is on the bleeding edge and utilizes emerging technologies in innovative ways, the Lights of Winter would be obsolete, and would be replaced by something that solves the eyesore problem and also showcases what the future of light displays might be for the rest of us. It could be a more passive display in terms of infrastructure, or even on the water. It could be something incredible–truly worthy of Future World.

I’m still optimistic that Walt Disney World will add a new Christmas light display to Epcot at some point, even if not in the same form as the Lights of Winter or in the same location. I’m not so optimistic that it will happen, but I still think it needs to. Especially in the next several years while the front of the park is a veritable construction zone, Epcot needs something during the holiday season to enhance the park, make it more inviting, and–most importantly–give guests a reason to visit. Lights of Winter 2.0 is the perfect solution.

What do you think of Lights of Winter? Any special memories to share of them? Did you ever see the display in person? Do you agree that it was Epcot’s big “wow” Christmas thing? Do you think it was nothing special? Hearing from you is half the fun, so please share your thoughts in the comments!

17 Responses to “Lights of Winter at Epcot”