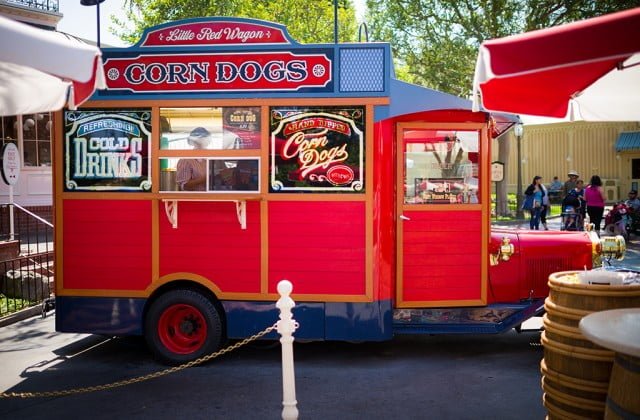 Little Red Wagon is the world’s first food truck, bringing delicious street food to guests of Main Street USA in Disneyland since Walt Disney first conceived of this revolutionary concept while sitting at a pub in Griffith Park and yearning for a place where kids and adults could enjoy corn dogs together. He then came up with the idea of a “theme park” as an afterthought, because he didn’t want to pay permit fees and other expenses of operating his Little Red Wagon corn dog food truck on public streets. Or something like that. While that history is absolutely inaccurate, Little Red Wagon is basically the greatest thing ever.

In actuality, Little Red Wagon was not conceived of by Walt Disney (it’s a far more recent addition to Disneyland than that), but I think it embodies his vision for Disneyland. (As everyone on the internet says in an attempt to add validity to their own opinion, “it’s what Walt would have wanted.”) His dream for Disneyland being a place for the young and young-at-heart is realized for me personally to a slight extent with Little Red Wagon. I would never even consider eating a corn dog in the real world, but in Disneyland some sort of carefree, youthful attitude takes hold of me, and I often find myself running to Little Red Wagon with glee.

So, how are the corn dogs at Little Red Wagon? Well, I think I’ve pretty much already answered that by calling Little Red Wagon “basically the greatest thing ever,” but since I try to write reviews that are more than 250 words, I’ll throw in some fluff and ridiculousness to beef up the word count here. Continue reading to find out more, but don’t say you haven’t been warned. 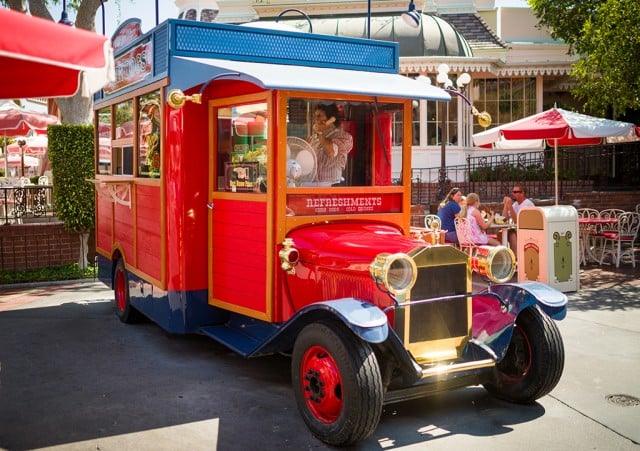 In case you’re unfamiliar with Disneyland and are having a difficult time parsing the sarcasm above, I’m completely serious about the corn dogs here being awesome. I know corn dogs aren’t exactly a glamorous food, but if you’ve never had a Little Red Wagon corn dog–even if you’re not a huge corn dog fan–you should give one a try. They’re excellent. 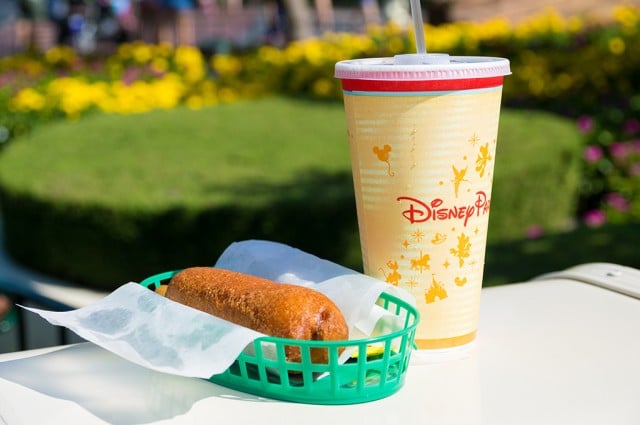 Truthfully, I don’t know what separates Disneyland corn dogs from ordinary ones, but I think it’s the hand dipped batter that gives the corn dog “layers.” It has a layer of crunch on top of a layer of moist and airy batter. It has a layer of semi-sweet taste from the batter on top of the salty, delicious taste of the dog itself. Corn dogs aren’t exactly a complex food, but these have a fresh taste and are substantially better than corn dogs you’re likely to find elsewhere. 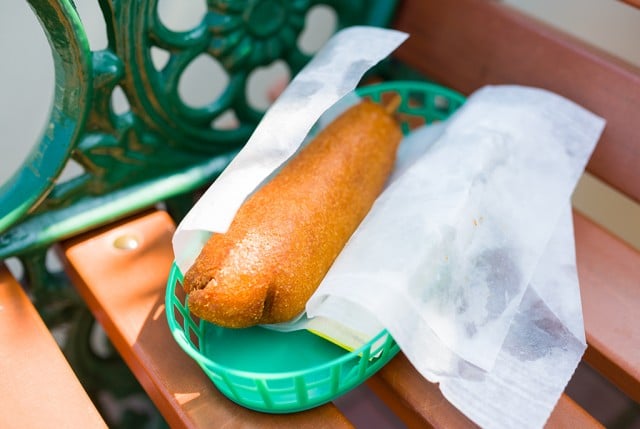 This isn’t just me. Disneyland corn dogs have a cult following among fans. Disneyland itself takes great pride in its corn dogs, and even points to foodies and food critics as loving them. The Little Red Wagon corn dog is so popular that Disney opened Corn Dog Castle in Disney California Adventure, so people wouldn’t have to purchase Park Hopper tickets just to get their corn dog fix. If you ask me, Disneyland missed out on a golden opportunity to have some sort of “corndogorail” between the parks forcing guests to purchase Park Hoppers. (Move over Hogwarts Express!)

If you ask many fans to weigh in on Corn Dog Castle v. Little Red Wagon, most will have an opinion as to which is superior, just as most have a favorite churro cart that they think is “the best.” For what it’s worth, I think Little Red Wagon is better for regular corn dogs, but my theory is not because they do something different, but because this location is more popular, so the corn dogs here are usually fresher. 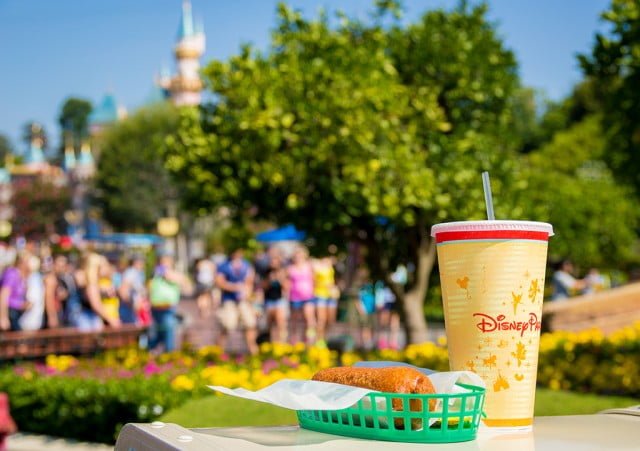 While lines at Little Red Wagon can be long, and seating minimal, the corn dogs are worth it. I highly recommend grabbing your corn dog and taking it to a bench in front of Sleeping Beauty Castle, which is the DisneyTouristBlog.com-Approved Corn Dog Consumption Methodâ„¢. Also, corn dogs come with chips by default, but you don’t have to order it with chips–and it’s cheaper without them. So even if you’re not keen on a corn dog for a full meal, without chips it’s a nice grab and go savory snack, both in terms of price and size. 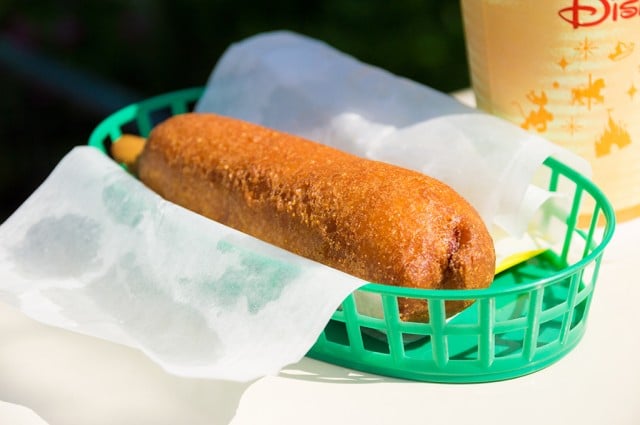 Another glorious (dare I say PATRIOTIC) idea: have a dinner of fried chicken at the Plaza Inn, then go to Little Red Wagon for a corn dog dessert, then take a food coma-induced nap in Great Moments with Mr. Lincoln. Gorging yourself on unhealthy foods and then falling asleep in something historically and culturally significant? ‘Murica. 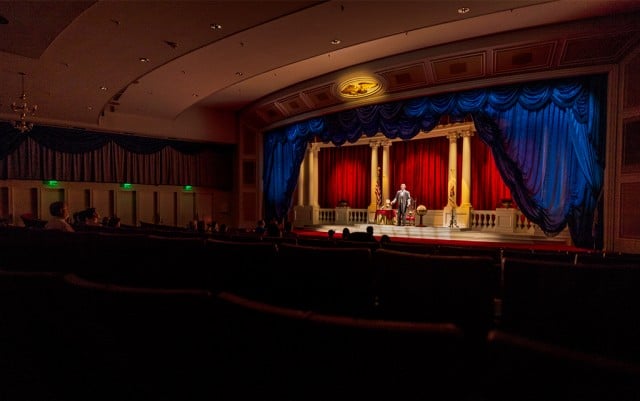 At this point you’re probably wondering just how many corn dog photos I’m going to show to drag this review out. Or, maybe you’re hoping that I’ll show more photos and you’ll get to see a cross-section showing the hot dog inside of the corn dog. That’s not going to happen–this is a family site, let’s keep things PG. It looks like any other bare hot dog. There’s plenty of that online, go to Google and get your fix that way if you need it… 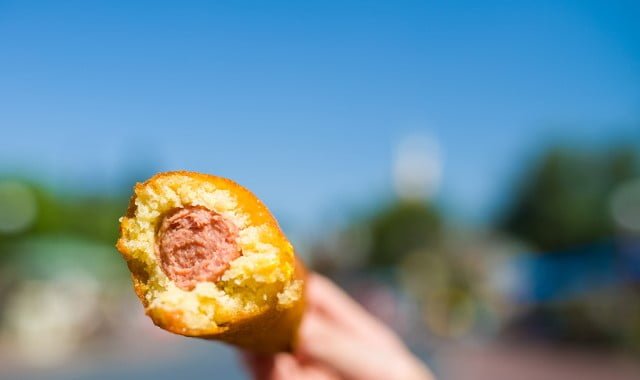 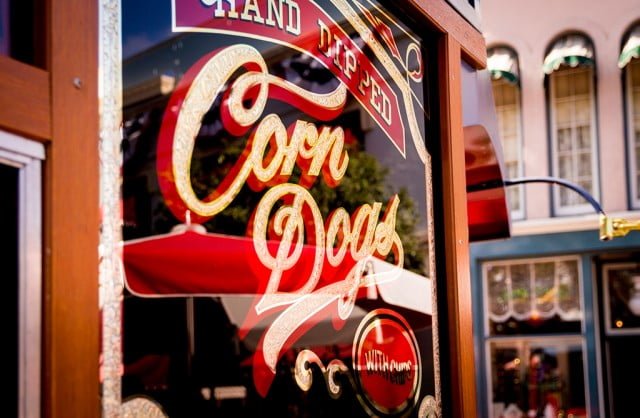 That’s enough ridiculousness for one post, so let’s put this review to rest. For what Little Red Wagon is, it’s pretty much flawless. We knock it down a point for it only having one menu item (versus a few variations at Corn Dog Castle) and limited seating. The corn dogs here do absolutely live up to the hype.

Are you a Disneyland corn dog fan? Little Red Wagon or Corn Dog Castle? If you aren’t a fan, why not? If you have any questions or thoughts to share, please post them in the comments. We love hearing from readers!