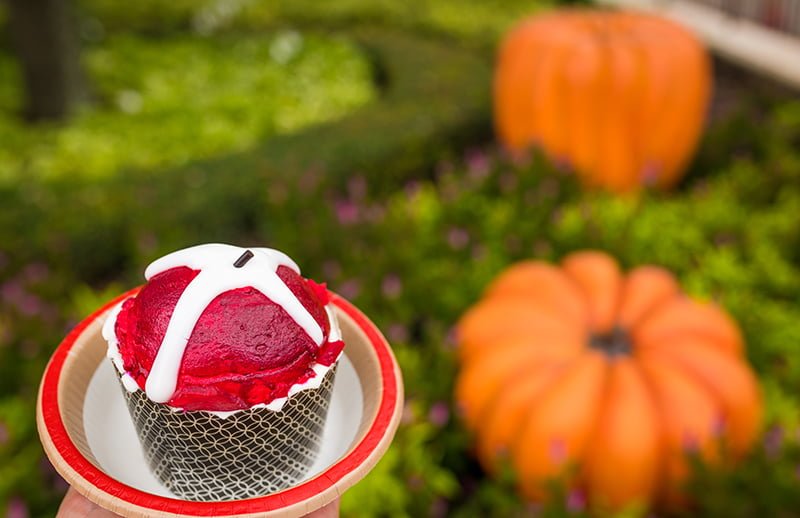 Magic Kingdom has a large lineup of Halloween snacks and desserts, with some exclusive to the 2018 Mickey’s Not So Scary Halloween Party nights and some available to Walt Disney World day guests. In this post, we’ll offer tips on what to take a look at the best and worst of these, sharing our favorites and what you should absolutely avoid.

Unfortunately, outside of Magic Kingdom, there’s not really much in the way of Halloween at Walt Disney World, which is why this is specifically a Magic Kingdom guide to Halloween snacking. As we noted in our post on this same topic last year, Walt Disney World has dramatically improved it seasonal snacking game, offering a variety of options after years of only a seasonal cupcake, Halloween cinnamon roll, and dirt & worms snacks.

That’s the good news. The bad news is that the focus for 2018 has clearly shifted from cute foods that offer great seasonal flavors to Not-So-Scrumptious snacks that will look good in carefully staged marketing materials. Note that we don’t even say “will look good on Instagram” as some of the things as actually served are far from photogenic.

That’s disappointing, but the upside is that over half the Halloween treats hit the mark, which provides more than enough variety to do some ‘spooky snacking’ around Magic Kingdom. Learn from our mistakes–you absolutely should not need to try every Mickey’s Not So Scary Halloween Party snack in a single night. That is, unless you want your stomach to feel frightening.

Another thing that’s disappointing is that every single thing we tried is overpriced by $1-2 even by Walt Disney World standards. There’s no doubt that you’re paying a premium for these being seasonal or “special” or whatever. The upside here is that nearly everything here counts as a snack credit on the Disney Dining Plan, making these items a great value for DDP users. So, if you’re at Walt Disney World for Free Dining season, you can really clean up on seasonal desserts.

With that said, let’s take a look at some of our favorite Halloween desserts and snacks in Walt Disney World’s Magic Kingdom. We’ll start with the good, and finish with the (really) bad… 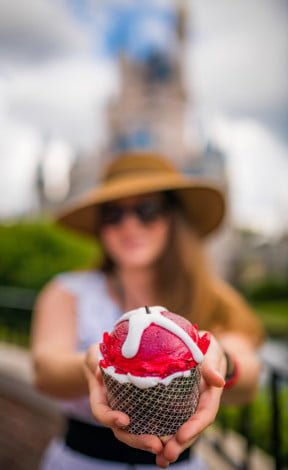 First up is the Not-So-Poison Apple Cupcake from Main Street Bakery, which is available daily through October 31, 2018. My expectations for this apple cupcake were low. I haven’t been particularly impressed with a Disney cupcake in a while, and I feel like the seasonal ones have been phoned in for the last couple of years.

Suffice to say, I was blown away. There is more pecan crunch here than actual cake, which provides a nice contrast to the sweet buttercream on top. The portion of buttercream is large (a bit two large for our tastes, but that’s always the case with Disney cupcakes) and is itself layered. The end result is a cupcake that’s textured, delicious, and balanced. It’s also the heaviest cupcake I’ve ever had, and is best shared.

While the out of pocket price of $7 might be difficult to justify, it’s a filling treat for two people. Moreover, the Not-So-Poison Apple Cupcake is easily 3 times the size of desserts further down this list and significantly better. By that standard, the value proposition is better. 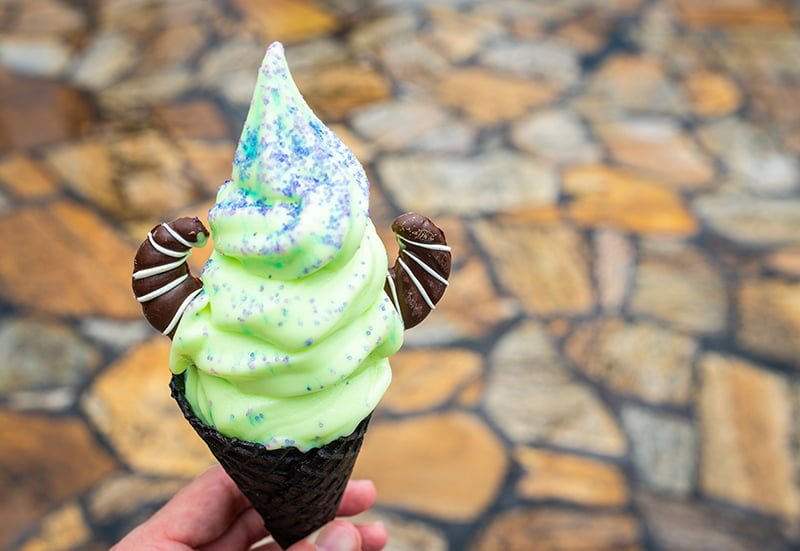 My favorite of the “seasonal” ice cream offerings is the Maleficent Dessert at Storybook Treats, which is available daily through October 31, 2018. Air quotes around seasonal there as I’m not sure what lime soft-serve has to do with Halloween, but this is served in a black waffle cone and topped with purple sugar and chocolate horns evoking Maleficent, so I guess the case can be made.

We are both huge fans of this lime soft serve. While this is only slightly cheaper than the popular Peter Pan Float (more on that coming soon) for about the same amount of soft serve, Sarah preferred this for its lack of Sprite. I disagree and would recommend the Peter Pan Float, but either way you can’t go wrong.

Note that there is also Candy Corn Ice Cream at Auntie Gravity’s Galactic Goodies in Tomorrowland, but this is vanilla ice cream. It’s the same stuff you can get anytime, just with different food coloring. 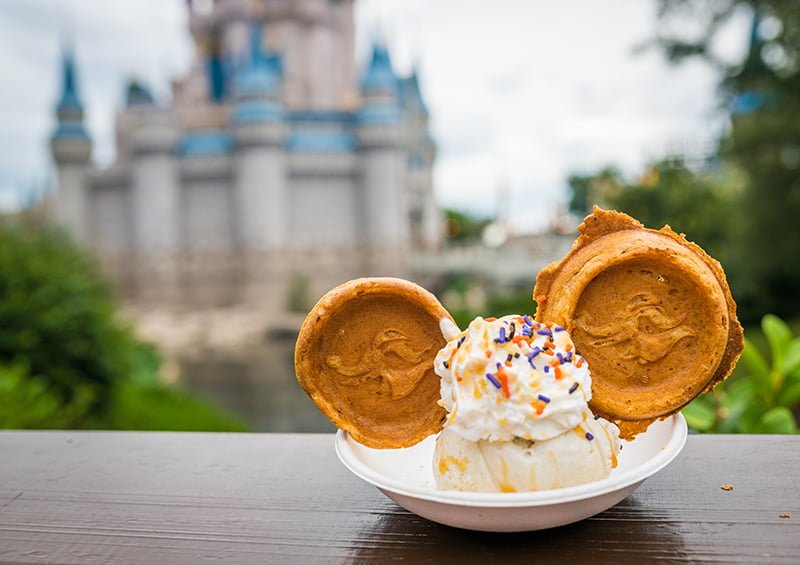 Of course, the all-star Halloween ice cream is the Zero Waffle Sundae. It’s available at Sleepy Hollow Refreshments on MNSSHP nights through September, and then daily starting October 1, 2018. This dessert is the tried-and-true classic of Mickey’s Not So Scary Halloween Party, and the only change here is swapping out Mickey waffles for circular ones with Zero the ghost dog from the Nightmare Before Christmas.

My one “critique” here is that the waffles don’t really look like anything, and that the Mickey waffles would’ve been better. Sarah countered that I was being nitpicky, but she can’t be trusted on this. She’s loves Zero because he (supposedly) looks like our dog. At the very least, they could’ve made the waffles in the shape of Zero? I don’t know–the dessert is still great, and a must-do highlight of Mickey’s No So Scary Halloween Party. 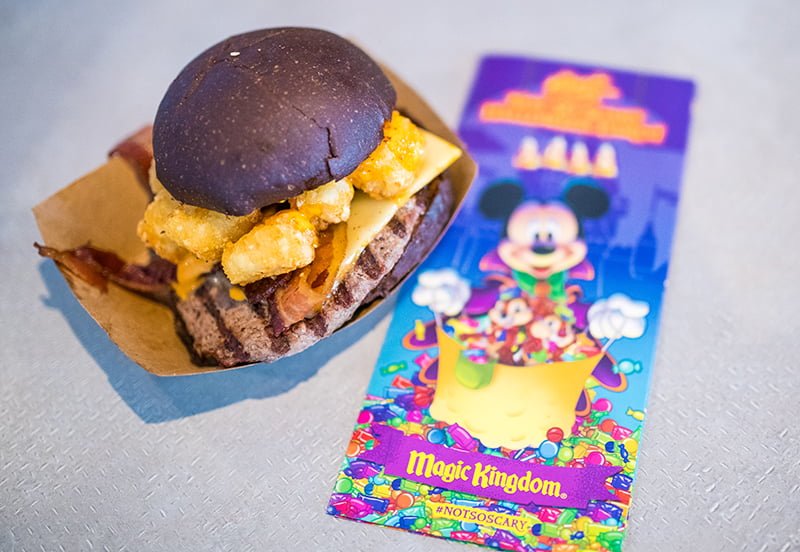 One of the savory entrees available during Mickey’s Not So Scary Halloween Party is the Muenster Smash Burger at Cosmic Ray’s Starlight Café. This burger served on a black bun and topped with Muenster cheese, tots, and Sriracha aÃ¯oli is available only on party nights, starting at 6 p.m. (so you can get a jump start on the fun).

The Muenster Smash Burger is surprisingly good (that’s not a typo), with the tots providing nice texture and flavor to the normal Walt Disney World burger patty. Stay tuned for more in our ‘Bizarre Burgers at Cosmic Ray’s’ post. 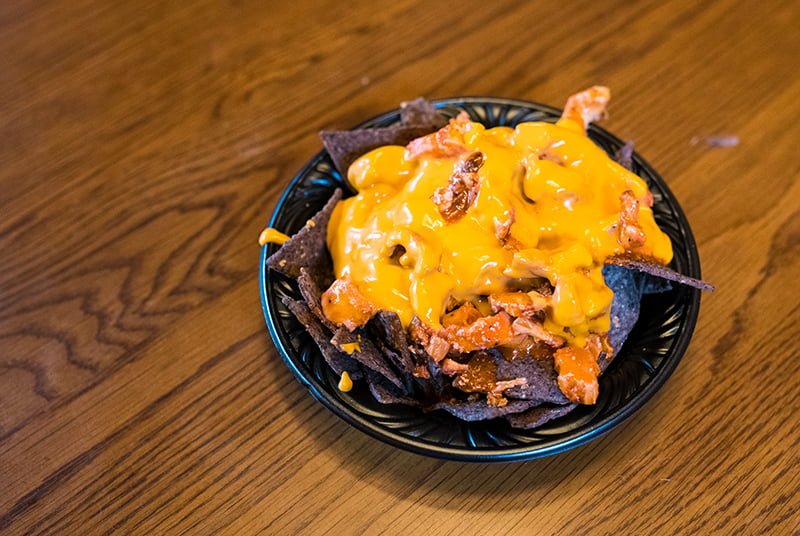 The other MNSSHP-exclusive entree is the Hades Nachos at Pecos Bill Tall Tale Inn and Cafe. These are black bean nacho chips topped with fiery buffalo chicken and vibrant cheese sauce (and whatever additional enhancements you want from the toppings bar).

The Hades Nachos were fine. I wouldn’t recommend them, nor would I recommend avoiding them. There’s a lot of cheese sauce, which was a bit much for me (especially after eating a half-dozen desserts before this). I also felt that the chicken was a bit dry, but it was also a generous portion size, so…I could go either way on this. 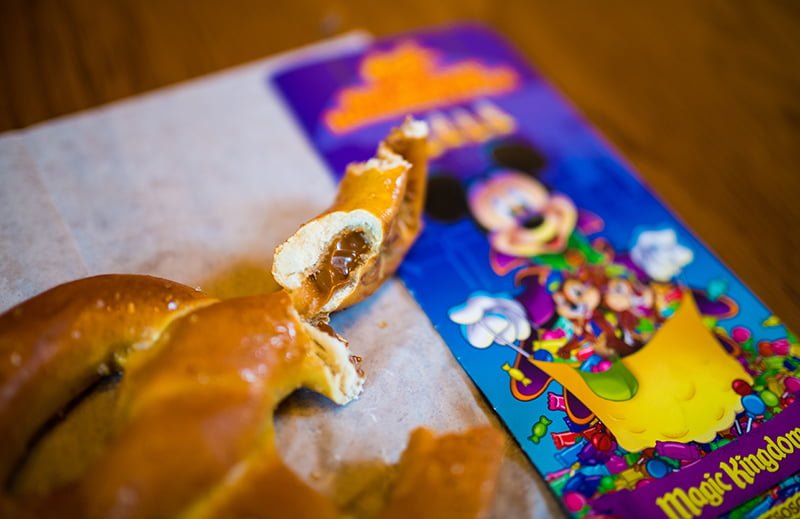 The nearby Golden Oak Outpost/Cider House serves the Warm Caramel-Stuffed Pretzel (among a trio of treats) that is unequivocally fantastic.

I believe this used to be served at Lunching Pad, but they cycle through novelty pretzels quickly there and I missed it. That was a mistake on my part, as this pretzel is warm, gooey, and sweet. We’d recommend sharing, as it’s also a bit rich, but it’s so good you might want to keep it to yourself.

After debuting last year, this snack returns for reasons unbeknownst to me. Here was our description from last year: “this thing is an abomination—an atrocious mix of whipped cream and ??? that is definitely not fit for human consumption. It’s also not fit for duck consumption, so don’t even think about throwing it on the ground in disgust after taking your first bite.”

We hope you don’t blame us for not making the same mistake of ordering it again this year. 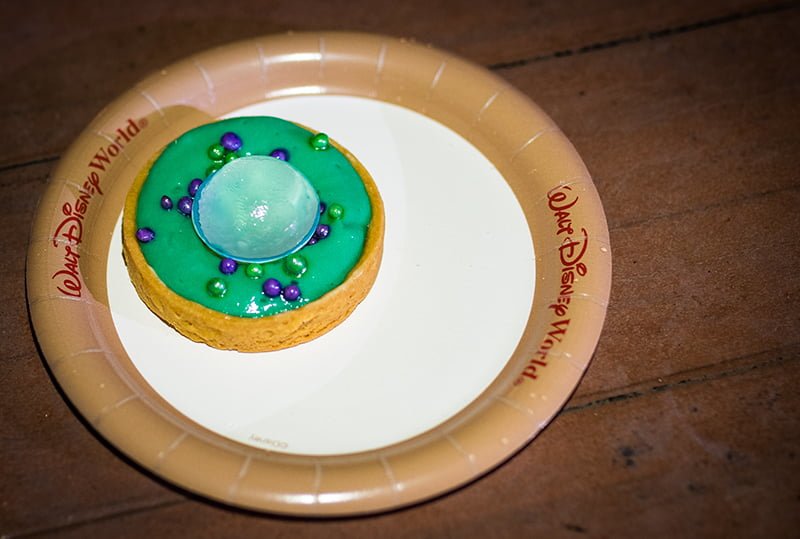 One snack that Disney shouldn’t have conjured up is the Madame Leota Dessert. Supposedly, this has a vanilla tart shell filled with toasted marshmallow pastry crème, topped with crispy pearls, chocolate, and a hard candy garnish.

For starters, this is laughably small. Not a huge loss though, as you only need 3 bites to be overwhelmed by the taste of artificial berries. While Disney talks a good game in the description, none of those other flavors are noticeable–it’s just generic berry, crust, and flavorless pearls.

The Madame Leota Dessert is also a complete misfire aesthetically. Madame Leota is covered by a sugar cube to mimic the illusion of the seance room in Haunted Mansion. Unsurprisingly, the effect works much better in an attraction designed by legends of Imagineering than it does in a $5 dessert with an opaque sugar cube. Who could’ve guessed that?! 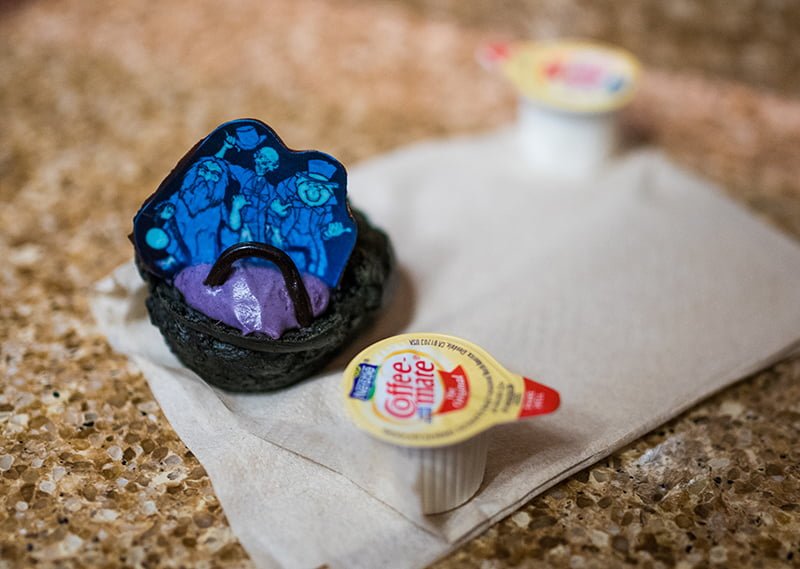 Not since the mid-aughts movie has the good name of the Haunted Mansion been so sullied as with the Hitchhiking Ghost Dessert at Aloha Isle. Sorry, that’s actually an insult to Eddie Murphy, because at least his film earned a respectable-by-comparison 13% on Rotten Tomatoes. This dud lays a goose egg.

I’m not joking here, and I was actually more than a little annoyed when we were handed this Hitchhiking Ghosts dessert. For the price, it’s offensively small. I guess on the other hand, it could be argued that Disney is doing us all a favor by sparing us from having to eat more than a thimble-sized portion of this ghastly puff. If someone told me this was made from 100% reconstituted Doom Buggy rubber, I would totally believe them.

We aren’t ones to ‘throw shade’ since reasonable minds and sincere opinions can vary, but we’ve seen people on social media hype this dessert up, and I have a very hard time believing that they are being honest. I get that positivity sells (which is why this blog’s tagline soon will be “Your Daily Dose of Good Vibes, Sunshine, and Magical Disney Propaganda”), but if everything Disney does is magical then nothing is. Giving the company a pass on garbage like this only creates a perpetuating cycle where, instead of being the gold standard, Disney is the standard-bearer of reduced expectations because they can do no wrong by fans. 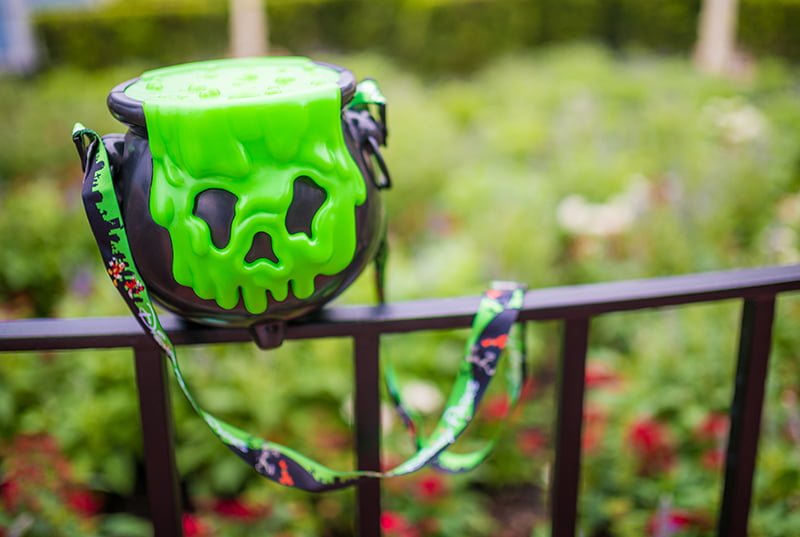 Finally, we have popcorn buckets. These are not technically food, but the popcorn inside counts, and we know many Walt Disney World fans love these things.

Overall, the good Halloween snacks tended to be really good and the bad ones are really bad. Only a couple of things are just meh, but that could also be that we skipped a few boring items that are perpetually on Halloween menus (like the Halloween Cinnamon Roll and the “classic” Dirt & Worms dessert, both of which we’ve found to be boring in the past). It’s nice that Disney has made an effort to make some of these desserts look ghoulish, but perhaps more of an effort should be undertaken to ensure that they don’t taste that way, too.

Have you tried any of these Mickey’s Not So Scary Halloween Party and other Magic Kingdom Halloween desserts? What did you like or dislike? Anything you’d like to see added to the fall menus at Walt Disney World? Any questions we can help you answer? Hearing feedback about your experiences is both interesting to us and helpful to other readers, so please share your thoughts below in the comments!