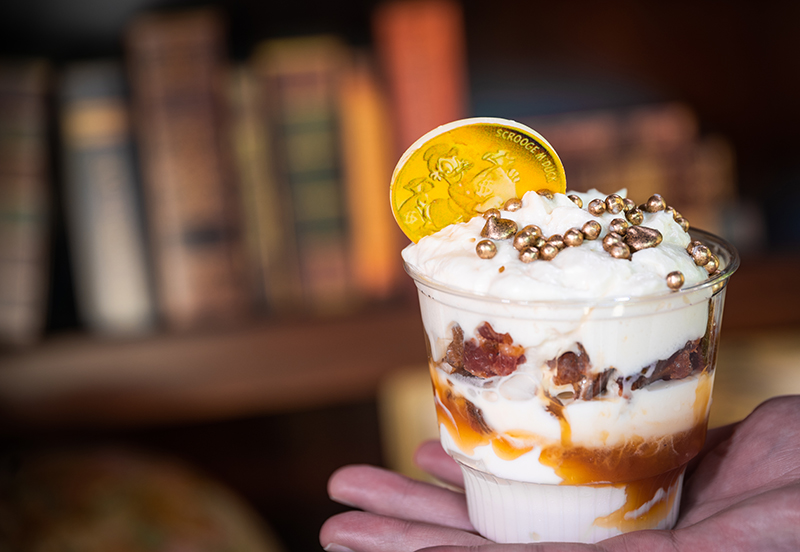 This post covers the best-value snack credit uses on the 2020 Disney Dining Plan. These include delicious Walt Disney World desserts, cupcakes, Epcot festival snacks, Dole Whips, Starbucks specialty drinks, and much more! Maximizing the ‘bang for your buck’ out of each snack credit is important for a couple of reasons, which we’ll cover in this post. (Updated January 22, 2020.)

Unfortunately, the most common snacks you’ll find at Walt Disney World are poor uses of your snack credits. We cover this, and the pitfalls of using your precious credits on them, in our Worst Uses of Disney Dining Plan Credits at Walt Disney World post. (Seriously, stay away from Goofy’s Candy Company and fresh fruit…albeit for very different reasons!)

Now, you might be thinking, “who cares–is there really a bad way to use snack credits?!” The answer is an unequivocal yes. Walt Disney World’s Dining Plan is only worth the money if you use your credits in a savvy way. Otherwise, you’re better off simply paying out of pocket. The other plus side? The items that are an objectively better use of Disney Dining Plan snack credits usually taste better, too. Win win!

Snack prices are obviously lower than Table Service and Counter Service meals, so there’s generally less of a difference between high and low snack prices than there is between high and low priced meals. Nevertheless, it’s worth paying attention to snack prices if you want to maximize your total value on the Disney Dining Plan, as some Epcot festivals have $10 “snacks” and other snacks might cost as little as a few dollars.

There are exponentially more snacks available on Disney property than there are other items, so some snacks aren’t always available. It’s not feasible for us to give a totally comprehensive, dollar-for-dollar breakdown, so this is more of a general top 10 than our Table Service and Counter Service credit-value maximizing articles. 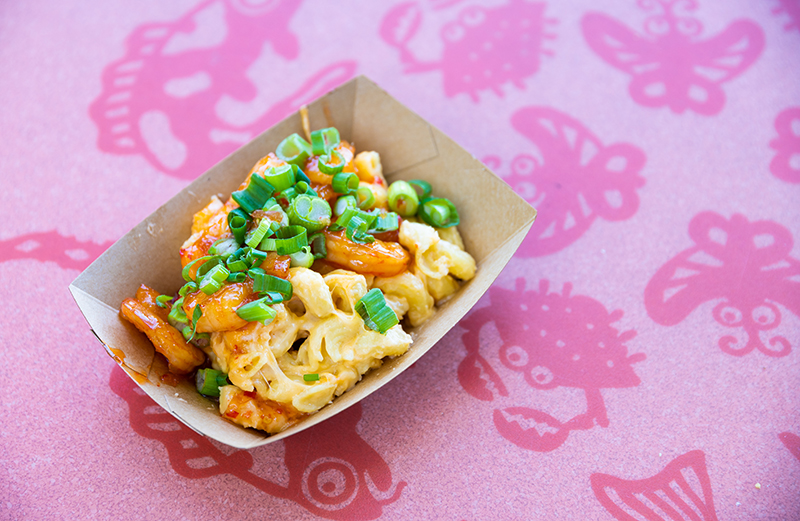 This list is updated annually, with the most recent addition being options from Animal Kingdom’s seasonal snack spots as well as the Epcot International Festival of the Arts. As Epcot has ‘stepped up’ its festival game over the last few years, these items are increasingly good options–but we’re getting ahead of ourselves.

Items that qualify as snacks for the purposes of the Disney Dining Plan are denoted by a little purple and white “DDP” symbol on the restaurant menus across property. Some items that are considered snacks in some locations aren’t considered snacks elsewhere. Make sure to consult the menu before ordering any item you deem a “snack” as Disney may not agree! 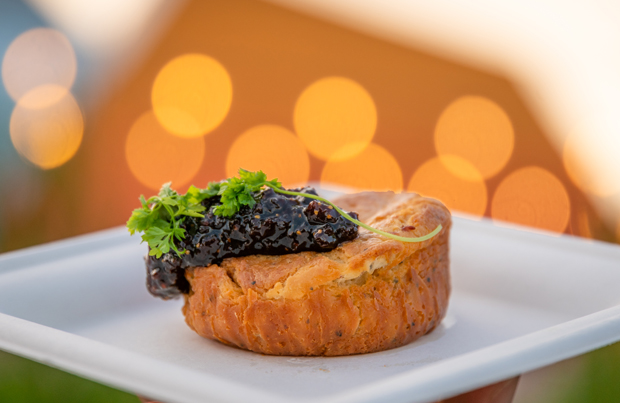 1. Epcot Festival Kiosk Snack Portions – If you’re visiting during one of Epcot’s three big annual festivals, read no further than #1 on this list. During the these events, you should be using ALL of your snack credits at the temporary kiosks set up.

To see just how far you can stretch your credits, check out our Epcot Food & Wine Festival Booth Menus post which includes food photos & reviews for every single snack at the event, and also discusses good uses of Disney Dining Plan credits. 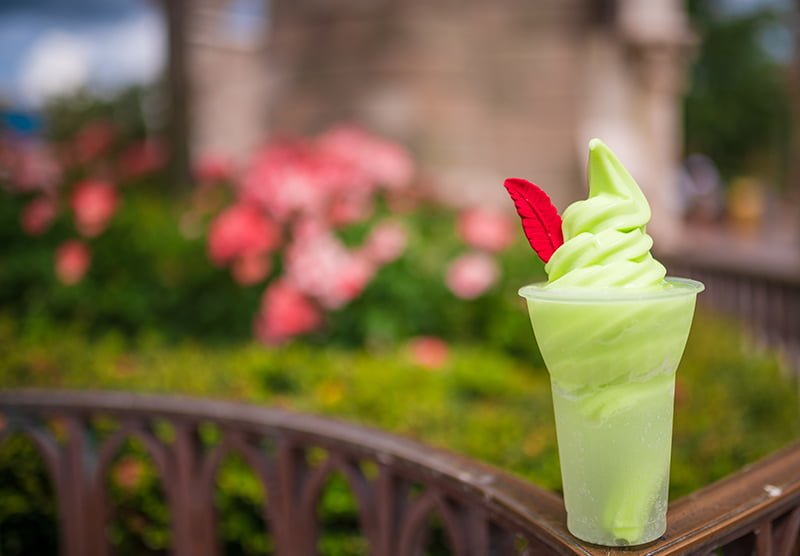 2. Magic Kingdom Floats & Swirls – You’ve undoubtedly heard of the Dole Whip, but are you familiar with the Citrus Swirl, Peter Pan Float, or other ice cream concoctions at Magic Kingom?!

Check out our Best Magic Kingdom Snacks List for our subjective favorites (and more), most of which are also good uses of snack credits on the Disney Dining Plan! 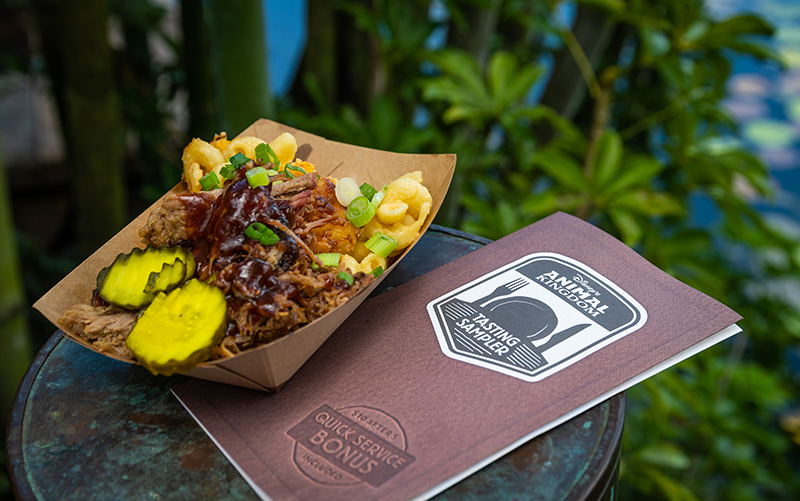 3. Animal Kingdom’s Savory Snack Stands – Lately, Animal Kingdom has been upping its snack game. Last year, the Animal Kingdom Tasting Sampler (a quasi-Food & Wine Festival) returned, and with it a ton of new menu options debuted. Many of these stuck around as permanent menu offerings.

One such item is Scrooge McDuck’s Billionaire Bacon Caramel Sundae from Dino-Bite Snacks (pictured at the very top of the post). Another is the Baked Macaroni & Cheese with Shrimp and Sweet Chili Sauce or Pulled Pork. Both are tasty, but we recommend the pulled pork. In fact, Animal Kingdom is probably the best option for savory snacks that offer a good use of Disney Dining Plan credits.

There are a variety of other pricey options that are also inventive and ambitious, so keep your eye out while you roam Animal Kingdom! Additionally, consult our Best Snacks at Disney’s Animal Kingdom. Not all of those offer great bang for buck on the Disney Dining Plan, but they are all delicious! 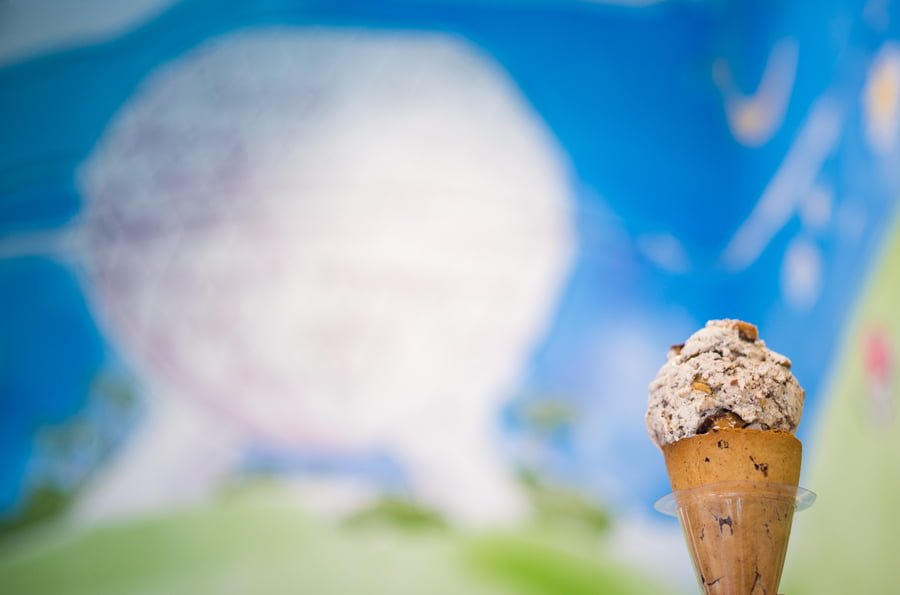 4. Ample Hills Creamery – A relatively new addition to Disney’s BoardWalk, Ample Hills Creamery has by far the best ice cream at Walt Disney World–much better than nearby Beaches & Cream Soda Shop. While only the small cups, cones, and ice cream sandwiches are eligible snacks on the Disney Dining Plan, they are still exceptional uses of a snack credit.

My recommendation: Ooey Gooey Butter Cake. The absolute best flavor at Ample Hills. So creamery and sweet, with chunks of soft butter cake to add even more sweetness. (My least favorite flavor is the “exclusive” Sally Sells Seashells Ice Cream, which I found a bit lacking.) 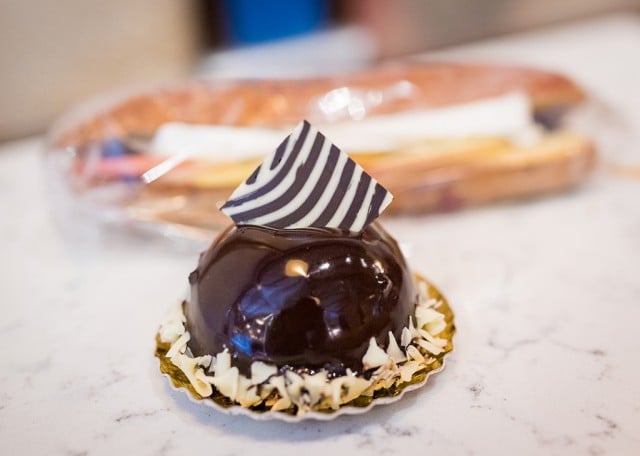 5. Epcot Bakeries – Epcot has two stellar bakeries (and several other good snack stops–just read our Snacking Around the World in Epcot post for other locations) in the World Showcase. Actually, Epcot has 3 of the 5 Top Bakeries at Walt Disney World.

The top 2 are Les Halles Boulangerie & Patisserie and our #1 bakery, Kringla Bakeri og Kafe. There are about 15 items in each of these bakeries that each exceed $3.75, which, in my mind, qualifies them as reasonably good values. Several other items are above $4, making them excellent values. It doesn’t hurt that just about everything at these bakeries is delicious!

6. “Homemade” Ice Cream Cookie Sandwiches – These are not the ice cream sandwiches that you can find at various ice cream carts every 10 feet in Walt Disney World (I really think there might be more of them than there are DVC kiosks!).

These, for lack of a better term, are “homemade” right in front of you with freshly baked cookies and hand scooped ice cream at only a few locations in Walt Disney World. 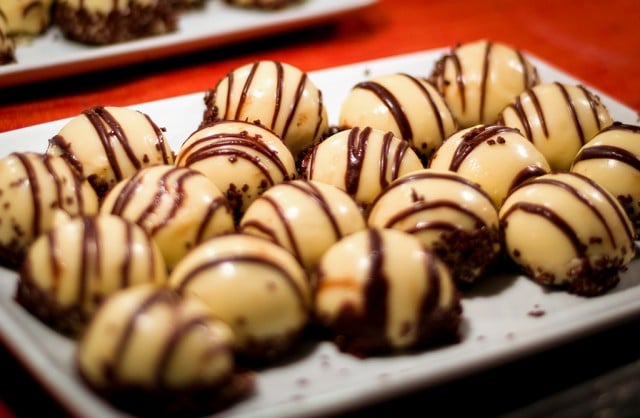 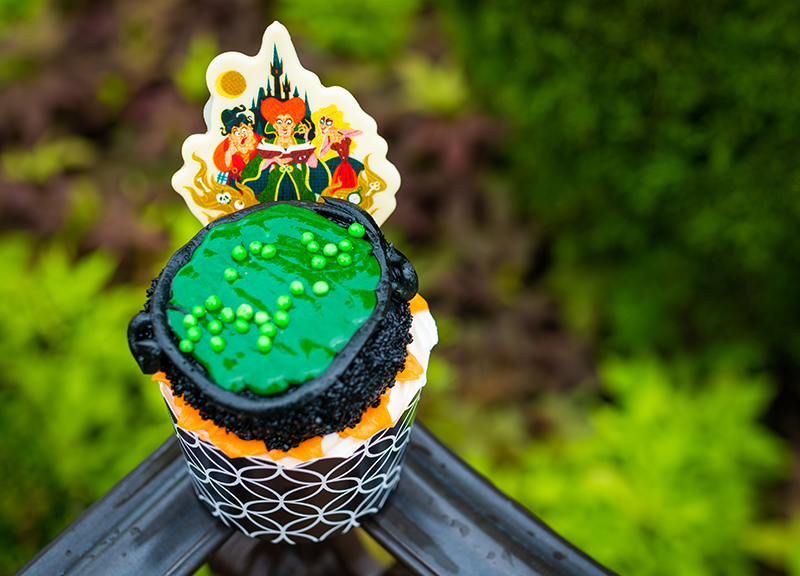 8. Gourmet Cupcakes – Pretty much any specialty cupcakes available at Walt Disney World is going to induce mild sticker shock, but if you’ve got snack credits to burn, those ~$6 cupcakes don’t sting quite as much.

For the most part, these cupcakes live up to the hype. While the whole cupcake trend is a bit played out, Walt Disney World still has some excellent options that we highly recommend! 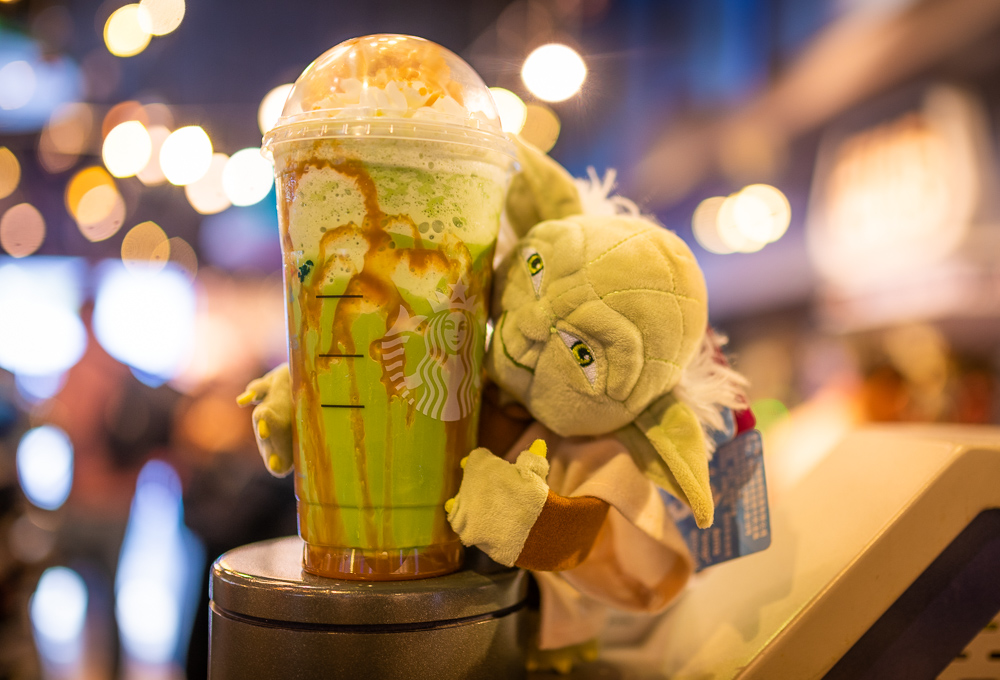 9. Novelty Drinks – As we cover in our Guide to Starbucks at Walt Disney World, almost every specialty drink on the menu at the 5 in-park and 2 Disney Springs Starbucks locations count as snack credits on the Disney Dining Plan. This includes the more elaborate ones that can cost ~$7, special themed drinks, and even secret menu items.

This means that you can order the Baby Yoda Frappuccino at Disney’s Hollywood Studios before you head into Star Wars: Galaxy’s Edge. This is technically a “secret menu” drink at the Walt Disney World Starbucks locations, but it’s so popular (and absolutely fantastic!) that the baristas are all well-antiquated with it. This and other specialty drinks at Starbucks are all spectacular uses of Disney Dining Plan snack credits.

Beyond Starbucks, there are countless options throughout Walt Disney World, but another we have in mind here is the Night Blossom – Non-Alcoholic Specialty Beverage with layers of Apple and Desert Pear Limeade topped with Passion Fruit Boba Balls at Pongu Pongu in Pandora – World of Avatar.

For a snack credit, you can get a “normal” cup, but not the Souvenir Mug with Glowing Unadelta Seed. Don’t lose too much sleep over not getting the souvenir cup, as the it is poorly made and might not even survive your trip home. 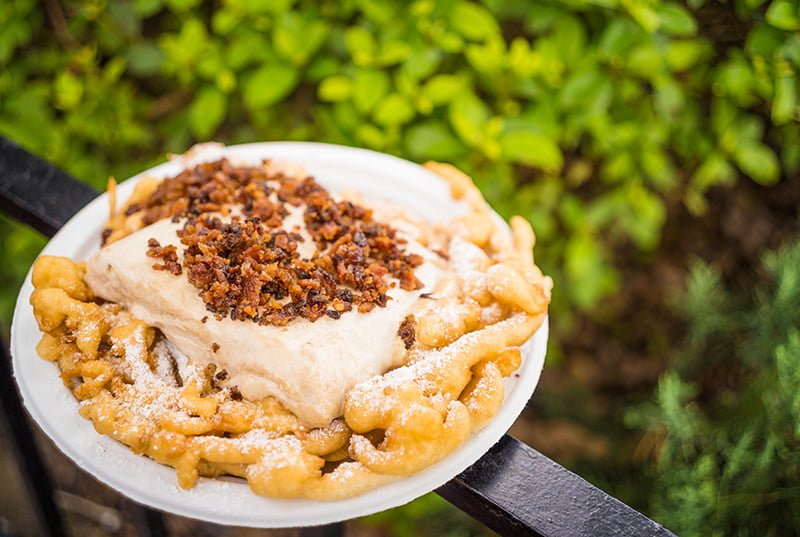 10. Funnel Cakes – Objectively speaking, the funnel cake carts around Walt Disney World are one of the best uses of snack credits outside of Epcot festivals. These are all typically over $7 in price, and included on the Disney Dining Plan as snack credits. Occasionally, you’ll find a seasonal offering that’s excluded, but that’s a rarity.

Subjectively speaking, we think Walt Disney World funnel cakes can be very hit or miss in terms of quality. We aren’t willing to take this gamble when paying out of pocket, but with a snack credit, it can be worth the “risk.” 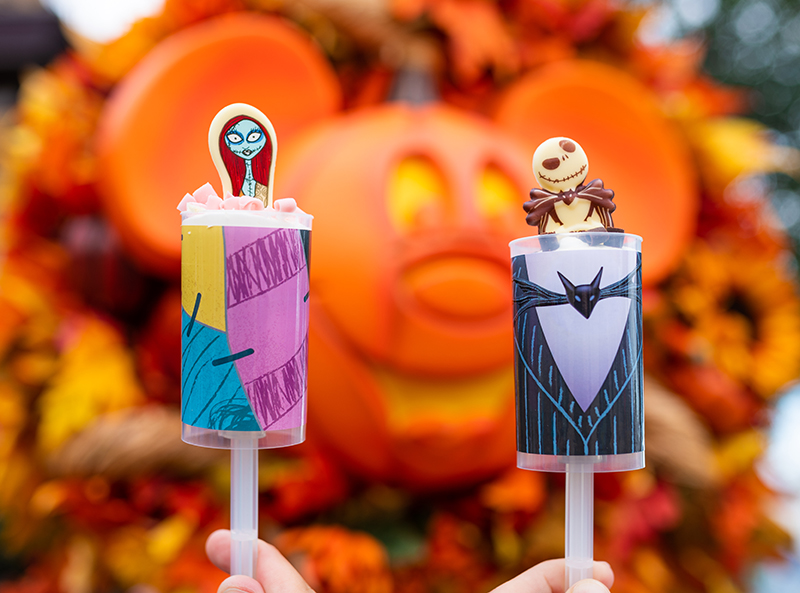 If this list doesn’t activate your sweet tooth, I don’t know what will. This just scratches the surface of value-maximizing snacks (and snacks in general) at Walt Disney World. Remember that while value is important, ordering snacks you enjoy is even more important (which is why you’ll often see us with the cheap School Bread from Norway instead of expensive snacks)!

What tips do you have for getting the most out of the Disney Dining Plan? Have any specific Walt Disney World snack items you recommend to maximize your value on the Disney Dining Plan? Do you agree or disagree with our advice? Any questions we can help you answer? Hearing your feedback–even when you disagree with us–is both interesting to us and helpful to other readers, so please share your thoughts below in the comments!