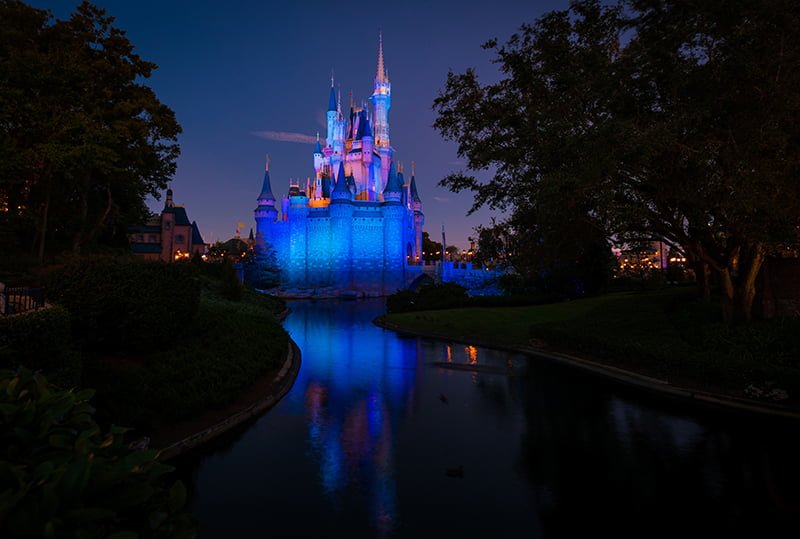 It’s back to Magic Kingdom for the next of our Walt Disney World construction progress and random park updates. Even though it’s not yet December, it’s been Christmas for nearly a month here. With temperatures the last couple of days falling, it has actually felt like the holidays, too.

We attended the Christmas Party this week, and arrived early for some photos for this update. We’ll have a full report from that night next week, or you can revisit our first 2018 Mickey’s Very Merry Christmas Party Photo Report for more on our yuletide experiences this year in Magic Kingdom.

There’s not much in the way of the holidays in this Magic Kingdom update, nor is there much in the way of construction. In fact, since we’ve started doing these reports, this is unquestionably the least exciting one to date. A number of projects have finished completely since our last check-in, and Magic Kingdom is looking great. Don’t fret, though; to spice this report up, I’ll interject lame attempts at humor and (in true holiday spirit) try to manufacture outrage about various things…

We’ll start with the biggest non-update update. We didn’t see any visible progress on the Tron Lightcycle Power Run construction area. Granted, unlike in our October Magic Kingdom Update, this time we did not visit Top of the World Lounge at Bay Lake Tower for a faux aerial view.

This time, we walked around inside Magic Kingdom, where not much is visible from Tomorrowland or Storybook Circus. Speaking of Tron Lightcycle Power Run, you’ve only got a few more days to experience the Walt Disney World Railroad before it goes down for an extended closure of potentially over a year on December 2, 2018. 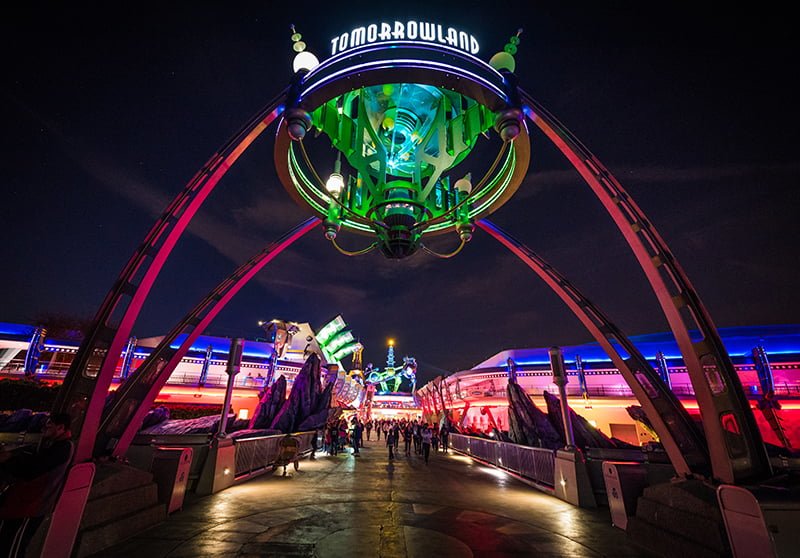 Sticking with Tomorrowland, we have the best type of progress of all: invisible progress. Or rather, work that has been completed. The removal of Monster’s Inc. Laugh Floor’s marquee and an ornamental UFO type detail is now finished.

I couldn’t get any clean photos of this during the day, but ever-committed, I returned during Mickey’s Very Merry Christmas Party for you because I’m that diligent when it comes to reporting on all the important updates. (Just remember that when we get to the next topic…) 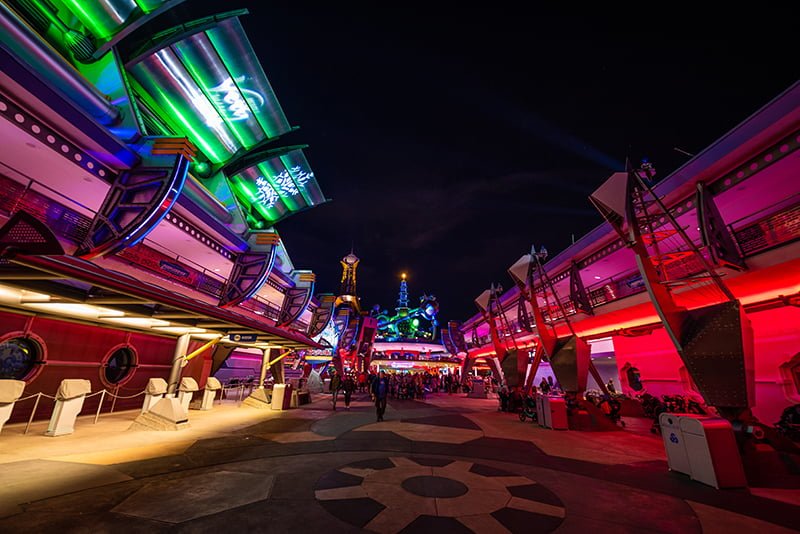 Space Mountain’s permanent exit has reopened with the removal of the SpeedRamp completed a week or so ago. I forgot to get photos of this the first time we did it. I couldn’t score another FastPass+ and there’s no way I was going to wait 40 minutes for you all to have a photo (that are already floating around online if you just Google it) of the new walkway that looks just like the old one, less a SpeedRamp.

Prior to the removal of the SpeedRamp, we heard some uncorroborated anecdotes about why it had to occur (for safety). I’d like to muster up some outrage that Disney wants to make us walk, like peasants. The sentimentalist in me will miss the SpeedRamp, but I won’t miss getting stuck behind groups that decide to stand on the moving walkway, side by side, impeding traffic. (No hate to those who did so in a single file line; it just boggles my mind that people haven’t figured out how to use moving walkways and escalators without walk/stand lanes explicitly printed on them.) 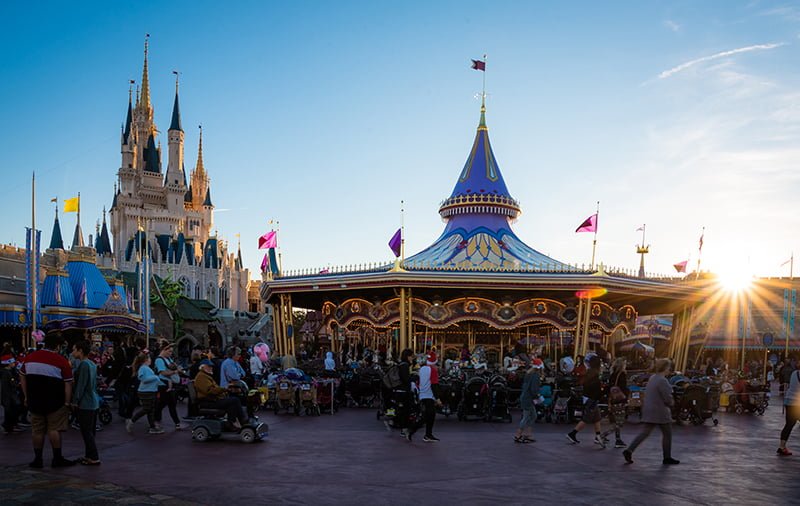 After what seemed like a never-ending project, the walls around Prince Charming Regal Carrousel are down.

Contrary to some “rumors,” it was not converted to a double-decker. Oh well–next time. 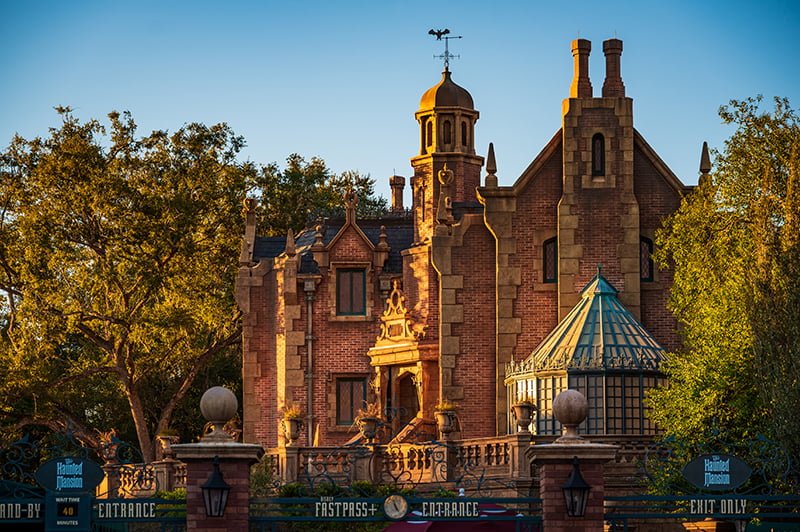 Just a reminder that the trees directly in front of Haunted Mansion have been replaced with smaller trees, revealing the facade in all its foreboding glory.

On your next visit, take the chance to savor the up-close view of Haunted Mansion’s facade. 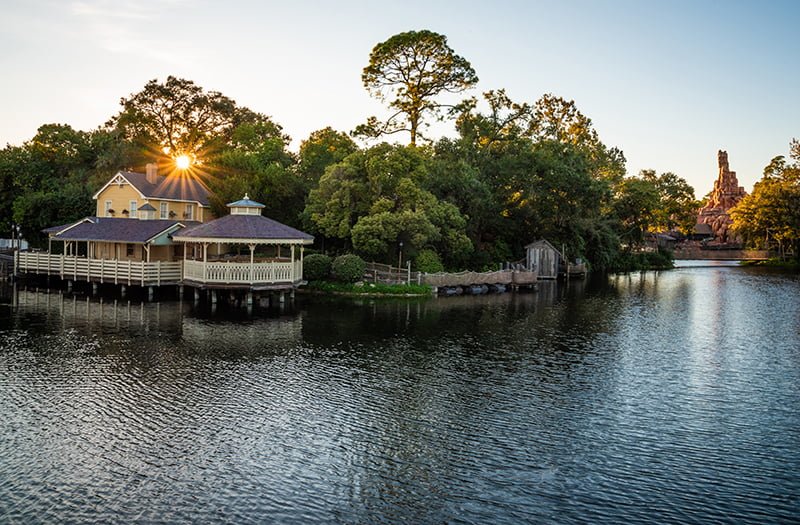 We missed it, but Liberty Belle Riverboat finally returned to Liberty Square following a refurbishment that drained the Rivers of America and has suspended operation of the Riverboat for most of the year.

The Riverboat has still yet to officially return, but we believe it’ll begin operating December 22, 2018 (just in time for Christmas week crowds). 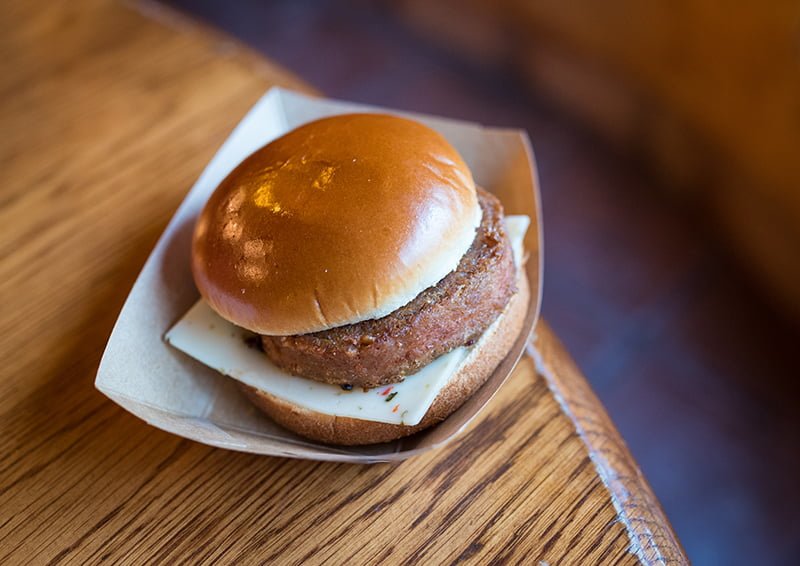 Sarah has been eating Walt Disney World vegan burgers for, according to her, the sake of research. No one asked for this, but I guess we’ll turn it into a post at some point?

I think this is “for research” in the same way that me stopping for ice cream is “for research.” Except one of those things is actually delicious. For what it’s worth, I’ve tried all of these burgers, and most are somewhere in the range of ‘not too bad’ to ‘wow, that’s vegan?!’ (Even this one that looks pretty uninspired was okay.) 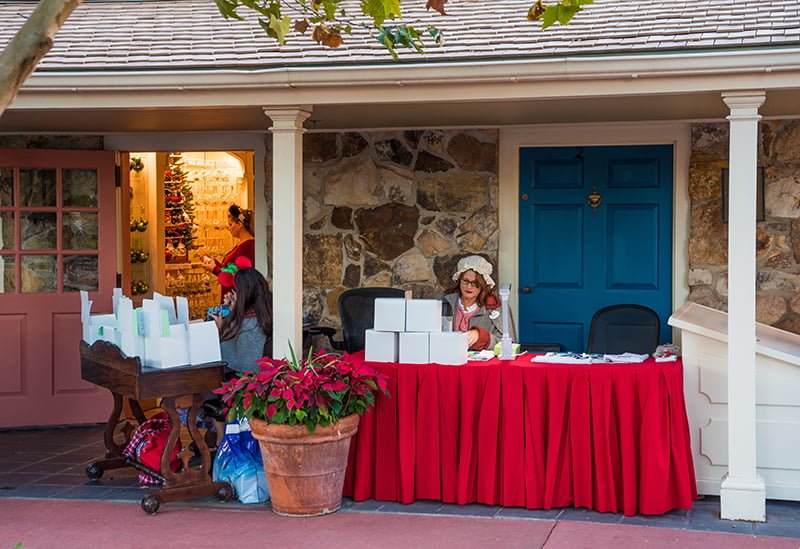 Unsurprisingly, ornament personalization is a big thing this time of year. 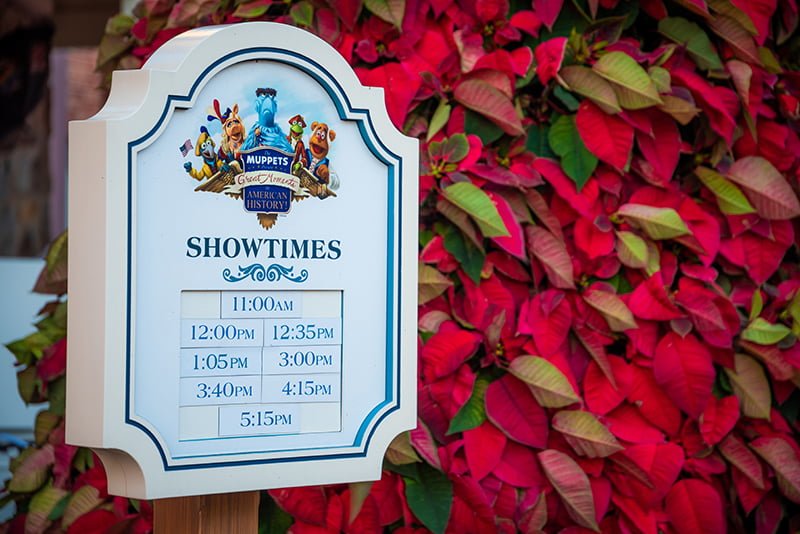 Also in Liberty Square, your semi-frequent reminder about ‘The Muppets Present… Great Moments in American History.’

This is one of the best additions to Walt Disney World in the last decade–if you haven’t seen it, do yourself a favor and catch it on your next trip. It’s great this time of year when the temperatures are a bit cooler. 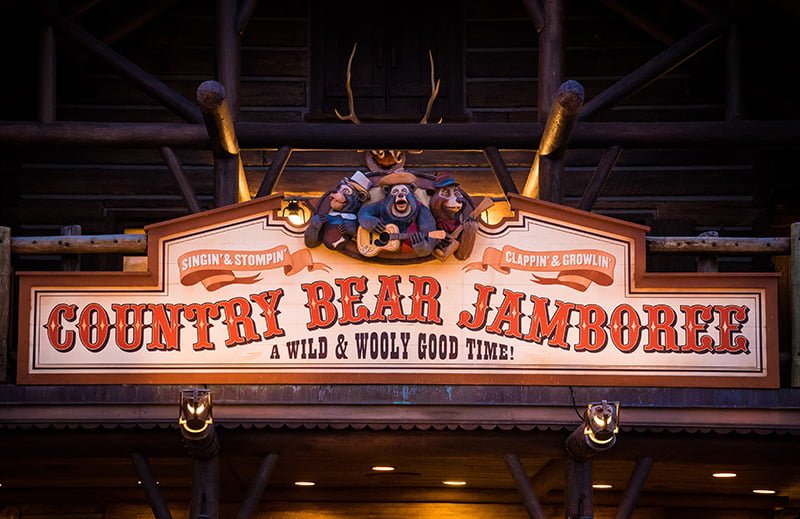 On a semi-related note, we’re sad to report that Magic Kingdom is not presenting one of the all-time best pieces of Walt Disney World entertainment this holiday season. That’s right, I’m talking about Country Bear Christmas. This marks the [checks notes] 13th consecutive year the holiday version has not run.

Okay, so not exactly breaking news at this point, but we feel it’s worth pointing out, especially for newer fans who might not realize this attraction overlay was offered to begin with. 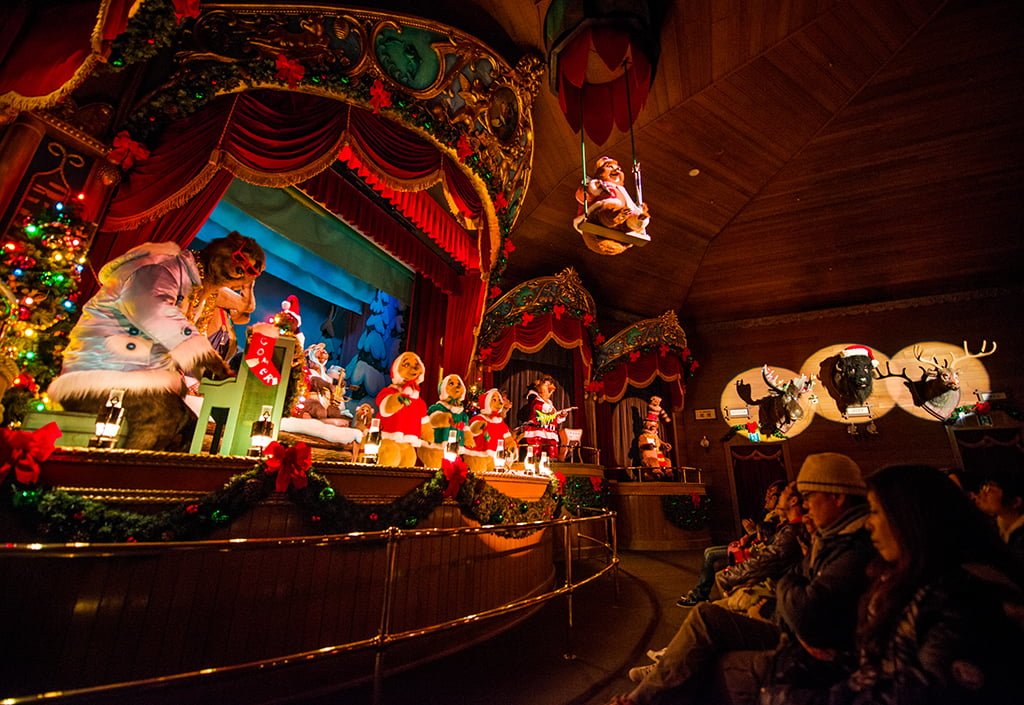 Country Bear Christmas is still performed at Tokyo Disneyland (as Jingle Bell Jamboree), and we have a tribute post featuring a synopsis of the show plus tons of photos. We absolutely love this show. It’s our favorite seasonal overlay, and the main reason we visit Japan during the holidays. No joke. 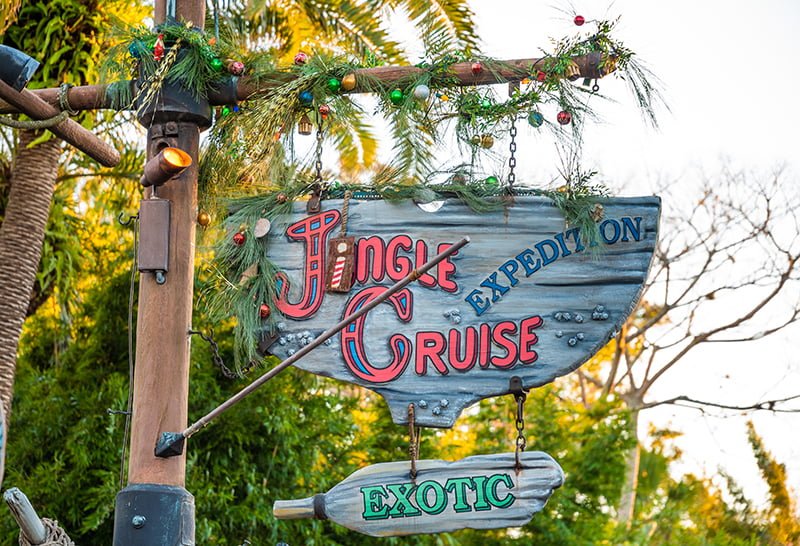 Meanwhile, Jingle Cruise survives despite being cut in California.

We have nothing against this overlay. It’s no Country Bear Christmas (then again, nothing is), but it’s a cute seasonal offering with hit or miss humor. So, more or less Jungle Cruise, but for the holidays. 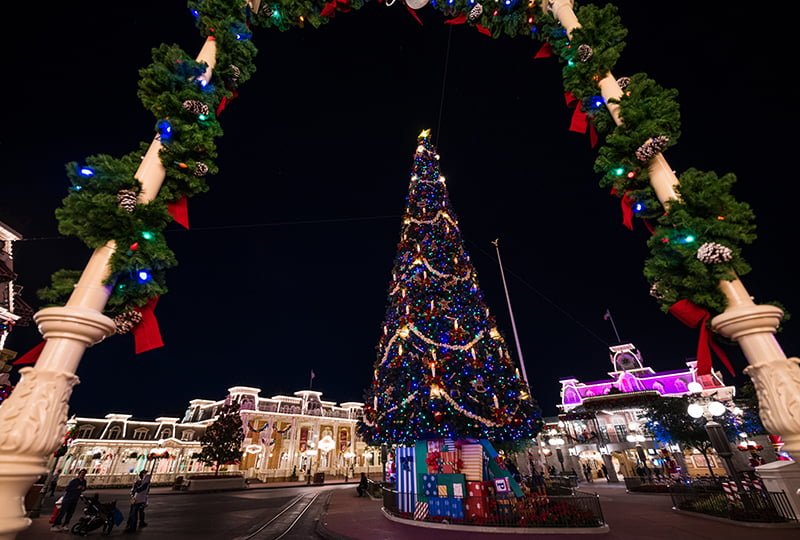 Here’s something about Christmas in Magic Kingdom that absolutely should be cancelled: this circa 1985 Christmas tree. I have no clue when it’s actually from, but I’d hazard a guess it’s old enough to run for president. Since this tree debuted at Magic Kingdom, Disneyland has replaced its Christmas tree approximately 39 different times (probably).

Look, we all made some style faux pas back then; the 80s were a wild time. I had lasers in my yearbook background and wore a Rescue Rangers jumpsuit along with knee high socks. However, rather than repeating these same mistakes, I’ve moved on (to new and different regrettable fashion choices). Magic Kingdom should be allowed to do the same–it’s beyond time for a new Christmas tree. 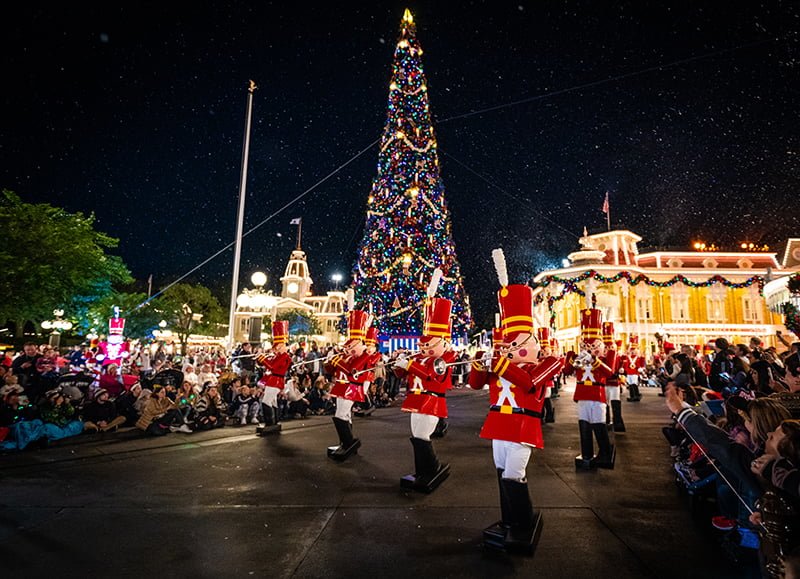 I know this is likely to elicit a “why are you so negative about everything, my kids love this?” response from a certain contingent, as is frequently the case when I’m snarky or negative about anything (never mind the positive commentary–any negativity is intolerable). For what it’s worth, I like the trees at just about every resort, and in our Epcot November 2018 Update, I also said I like that tree. (Spoiler alert: I also like the DHS tree.)

How Magic Kingdom gets stuck with the worst and most outdated Christmas tree at Walt Disney World is beyond me. This is Walt Disney World’s flagship park, and one with a paid holiday event that should help ‘subsidize’ the cost of a replacement. 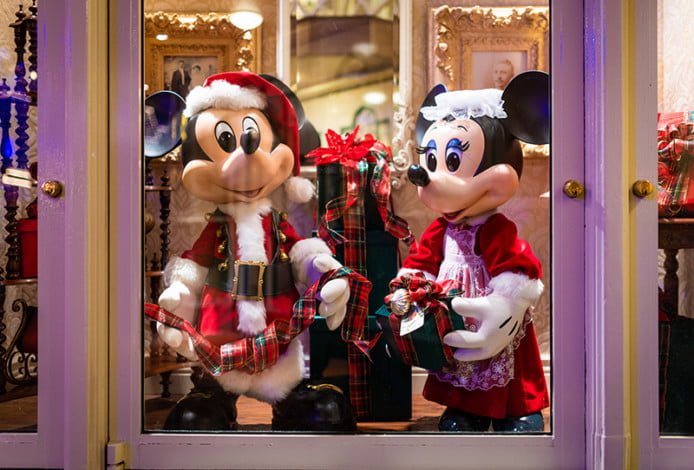 In another note of unbridled positivity, I really like the Christmas window displays at Magic Kingdom. This is another thing mentioned in the Epcot update, and it holds true here. Be sure to spend some time perusing them–especially the Mickey’s Christmas Carol ones in the Emporium.

All in all, not the most exciting update, which may make for an unexciting read, but should make for a better in-park experience. A lot of the work that we’d been watching for the last several months has wrapped up, and Magic Kingdom is looking great. Main Street is scrim-less and beautiful (minus the tree…and lack of garland), Tomorrowland is devoid of tacky banners and random walls, and the rest of the lands are also looking good and mostly construction-free. We’ll be back with another update sooner rather than later, so stay tuned for that!

Thoughts or insights about current construction projects in Magic Kingdom? Do you miss Country Bear Christmas? Thoughts on the Magic Kingdom Christmas tree? Any questions we can help you answer? Hearing your feedback–even when you disagree with us–is both interesting to us and helpful to other readers, so please share your thoughts below in the comments!