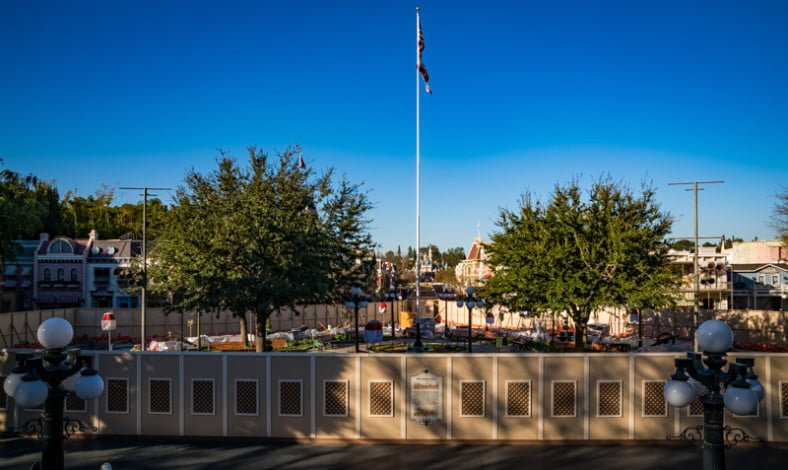 It’s refurbishment season at Disneyland! Normally, that means a pretty lengthy list of refurbishments as Disney attempts to do as much routine maintenance and improvements during a time of the year that’s historically off-season (last year being the exception).

In addition to the normal refurbishments like Haunted Mansion and it’s a small world (both of which have already reopened and are looking good), Splash Mountain and Grizzly River Run tend to have refurbishments this time of year due to the weather, and there are also usually a few other major projects in January and February in Disneyland and Disney California Adventure.

We’ve already covered the huge Pixar Pier Construction Project that is engulfing a big chunk of Disney California Adventure, so today we thought we’d head across the Esplanade to see Disneyland’s big project: the Main Street, USA track replacement. To be honest, this isn’t all that exciting of an update, but we wanted to provide photos and video as several of you have asked just how “bad” Main Street looks during construction. So, here you go…

The Disney Parks Blog first announced this project in January, and worked started shortly thereafter. Per that announcement, “For the first time, the horse-drawn streetcar track on Main Street, U.S.A., will be replaced in its entirety, temporarily pausing the operation of all Main Street, U.S.A. vehicles.”

Disney further stated, “this complete replacement will incorporate new brickwork that will enhance the look of the iconic thoroughfare. The pieces of original track that remain today will be salvaged and preserved, and the previously updated pieces of track will be recycled.”

In addition to how Main Street looks, the scope of this work also means no Main Street vehicles, fireworks, or parades. (Although given the crowds this time of year, daily entertainment likely would’ve been scaled back regardless.)

While this project is visually intrusive for guests and the lack of entertainment might put a damper on first-time and once-in-a-lifetime visits to Disneyland, we have to give kudos to Disney for exactly that reason. Guest Relations has no doubt received a barrage of guest complaints, and we’re sure the phrase “vacation ruined” has been thrown around with reckless abandon.

Replacing the trolley track is not exactly a sexy project, and the “fruits” of this work is essentially just smoother trolley operations and a slightly nicer aesthetic thanks to the added brickwork. Even if the track had degraded to the point that the trolley would have to cease operations, doing that might’ve been the easier choice for Disneyland.

Of course, the easy option is often not the right one, and we think that’s true here. Moreover, that type of decision-making leads to a slippery slope of neglect and closures that is detrimental to the guest experience and safety in the long-term. While we definitely aren’t fans of the way Main Street looks right now and the lack of entertainment, this is the kind of refurbishment that is essential to maintain Disneyland’s standards.

We say all of this as a preface to the construction photos because we know some people will be agitated by the scope of this work, but we think it’s important to underscore the fact that projects like this are what makes Disney, well, Disney. You probably wouldn’t be reading this blog in the first place if Disneyland were just Six Flags Magic Mountain, but with more characters.

Anyway, here’s a look at the work…

As soon as you step foot into Town Square, you can see that Main Street has transformed into Wall Street. As you can see in the above video, the entire center area is totally consumed by construction.

Here are some photos starting in Town Square, and continuing up Main Street: 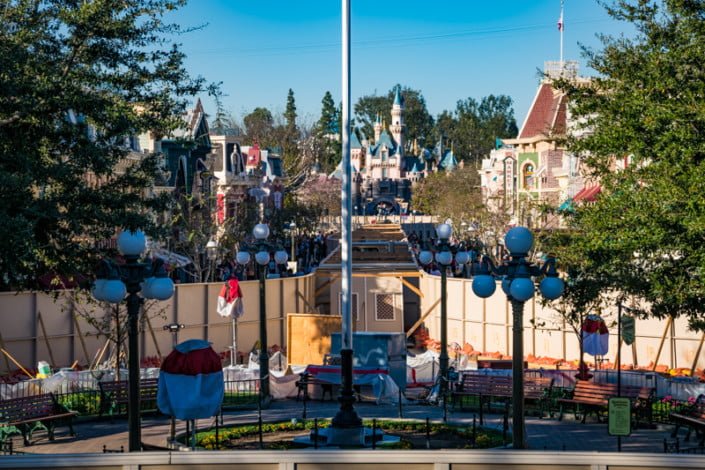 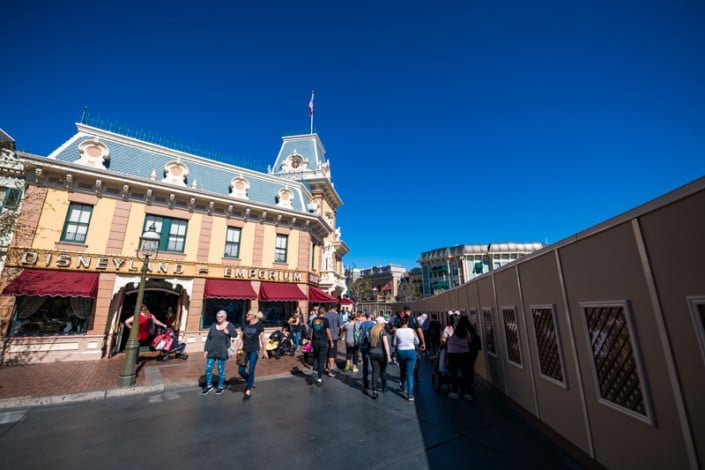 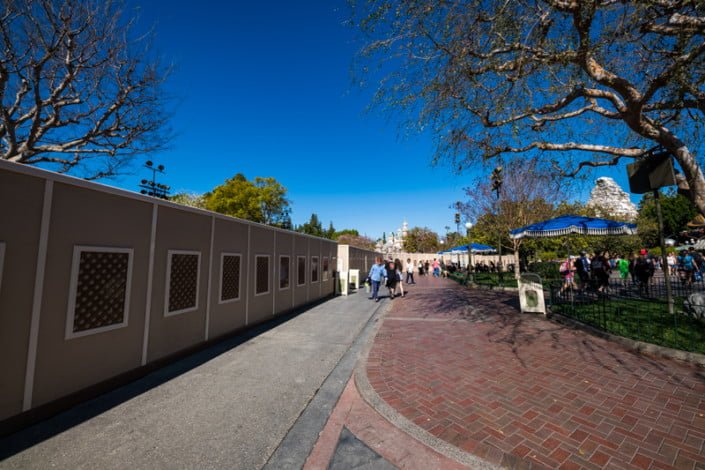 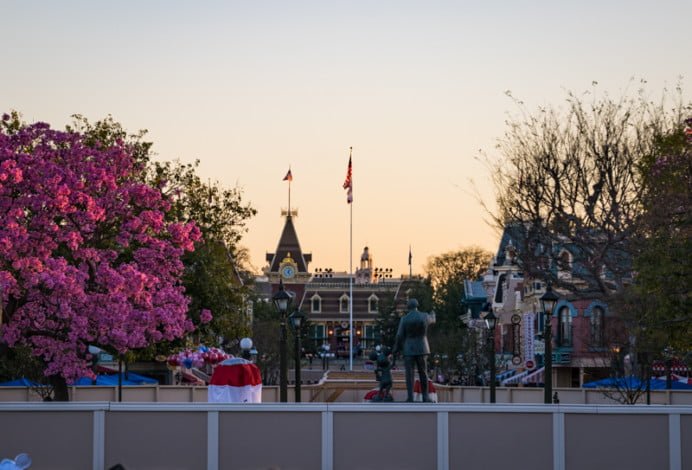 Much like Town Square, the entire Hub/Central Plaza is blocked off with walls. The bad news is that this means no photos with the Partners statue and the Tabebuia trees and their beautiful pink blossoms. The good news is that you can walk directly in front of Sleeping Beauty Castle for an unobstructed photo.

The (second) bad news is that literally everyone else will be doing this, so even on uncrowded days, we’ve noticed a lot of guests in front of the castle. 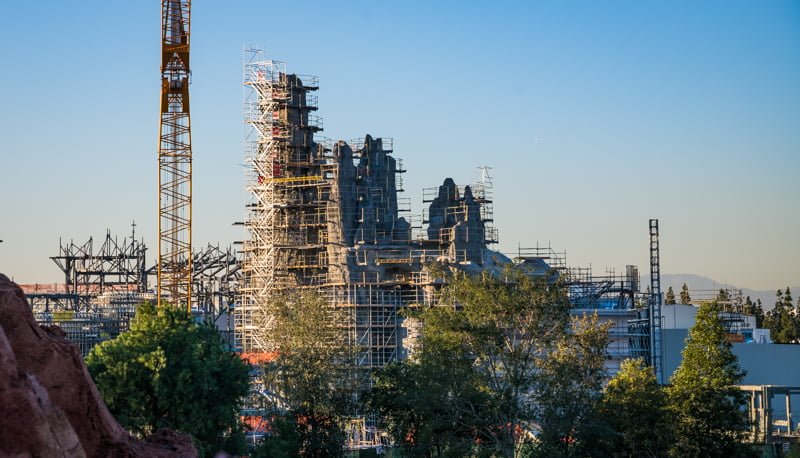 Above is a photo of Star Wars: Galaxy’s Edge from Big Thunder Mountain Railroad. I realize this is off topic, but I forgot to take other photos for an update on that, so…this is the consolation. This rock-work is visible from many spots in the park.

Once you leave Main Street, Disneyland is lovely. Even though other refurbishments (Splash Mountain, Dumbo, Casey Jr. Circus Train) remain ongoing, those are not obtrusive. On the weekdays we’ve visited thus far this year, crowds have been comparatively low relative to last year, with New Orleans Square and Frontierland being especially pleasant. On these low crowd days, you won’t even need to purchase MaxPass.

Disneyland has not released an official date for when this construction project will be completed, but we would hazard a guess that target is the beginning of March. This is when spring crowds begin to rise, and Main Street simply cannot handle peak season crowds in its current condition. The absolute latest it should be finished is March 15, 2018, as that is the date that Orange County public schools begin their Spring Break, which typically spells a huge surge in crowds at Disneyland.

What do you think of the Main Street trolley track construction and this sea of walls? “Vacation ruined!!!1!!” or a necessary part of maintaining Disneyland? Any questions about Disneyland’s refurbishments or the current state of the park? Hearing feedback about your experiences is both interesting to us and helpful to other readers, so please share your thoughts or questions below in the comments!