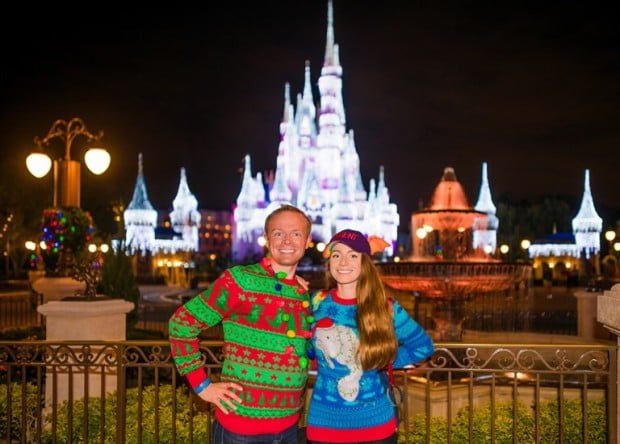 We attended Mickey’s Very Merry Christmas Party for the 9th consecutive year on December 3, 2015. If you’re wondering whether we think the Christmas Party is worth the money, our attendance record should probably answer that question, but we really love Christmas. Plus, by my calculations, even with the rising price of party, you “only” have to eat 28.57 snickerdoodle cookies to get your money’s worth out of the party. (CHALLENGE ACCEPTED.)

We try to do a better job being objective about that common “is it worth it?” question in our Mickey’s Very Merry Christmas Party Tips & Review post, which is updated a couple of times per year. However, it’s been a while since I’ve done a new post on the Christmas Party, and thought it might be useful to offer some thoughts skewed more towards those who have been before.

This won’t be comprehensive–just my random thoughts and photos from this year’s party. In other words, if you have never been, start with the linked-to post above, as this one is more anecdotal and tangential–almost like a Mickey’s Very Merry Christmas Party trip report.

Our day of the Christmas Party started early, as we arrived at Walt Disney World with Jen and Guy “Laundry System Technologist” Selga via red eye at 6 am, took a nap in the River Roost Lounge at Port Orleans Riverside, and then slept some more in our room at All Star Sports before being awoken by the *ahem* youthful exuberance of hundreds of Pop Warner participants playing football in the courtyard outside our room. But all of that is another story for another post–and a proper trip report. 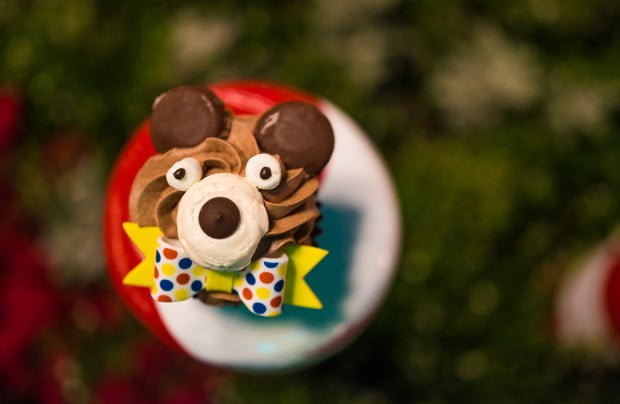 As for Mickey’s Very Merry Christmas Party itself, we donned our holiday finery–hella fly manatee and dinosaur Christmas sweaters–and headed for the Magic Kingdom, arriving shortly after 4 p.m.

Once in the park, we had dinner at Pecos Bill, did a few attractions, grabbed the Christmas bear cupcake (which is supposed to be exclusive to MVMCP, but goes on sale before 7 p.m.), and then lined up for Sandy Claws just after 6:30 p.m. 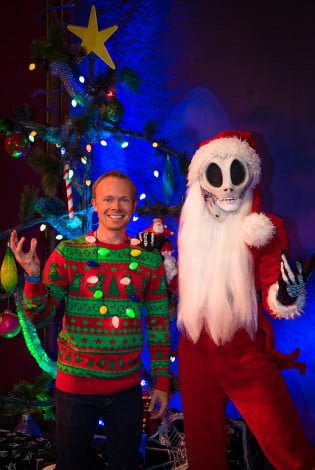 We met Sandy Claws at 7:10 p.m., by which time the line was easily an hour wait. I wouldn’t normally wait even 40 minutes to meet a character, but I wanted to confirm the strategy we’ve used (and continue to recommend in the MVMCP Tips post) in the past for the Seven Dwarfs, and it remains sound. Only 10 minutes of actual party time for a rare character is not bad at all.

From there it was on to the Castle Forecourt for Celebrate the Season. This is a show we both enjoy a fair amount. It has solid musical numbers, fun costumes, and entertaining choreography. I can’t think of any faults I have with it at all, really. With that said, if Disney announced it was being replaced, I’d be fairly happy. 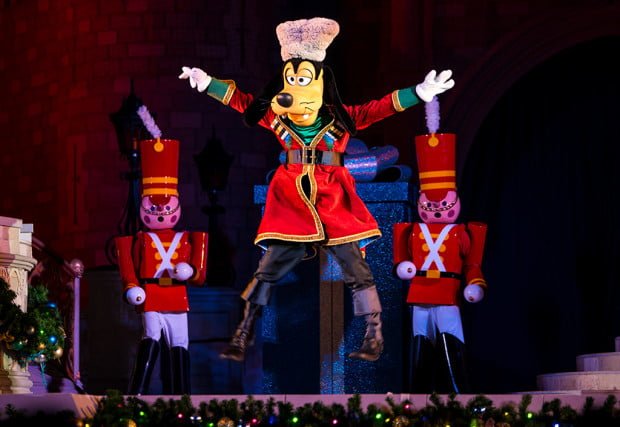 Celebrate the Season has had a long run, and while still good, after seeing what they did with Hocus Pocus Villain Spelltacular, I’d be fairly optimistic about the potential for a replacement. I’m not suggesting this will happen, but I wouldn’t be surprised after the near-unanimous positive response to the new Halloween show.

If Disney is following the formula of utilizing a less prominent property, I think we all know what the new (potential) new Christmas stage show should be: Emmet Otter’s Jug-Band Christmas-tacular! (Really, any Henson Christmas production would be a winner in my book. Think of the possibilities!) 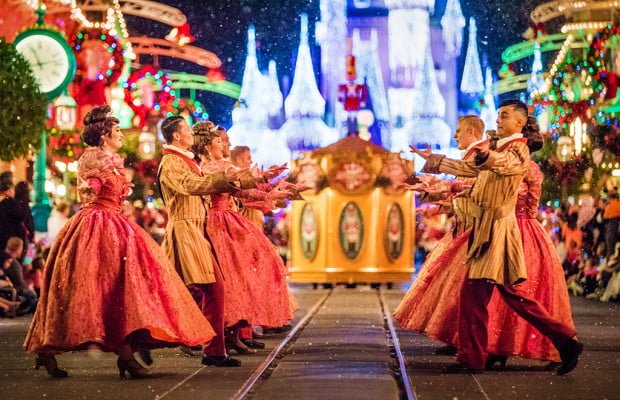 After that, it was time to stake out spots for Mickey’s Once Upon a Christmastime Parade. I’ve always really enjoyed watching and shooting this parade, but I’m slowly getting more into entertainment photography, so I was hoping to nail some stuff. I did not–at least not like I wanted. Like any good American, I won’t take accountability for this, and instead blame the lack of snow (it was lightly raining). 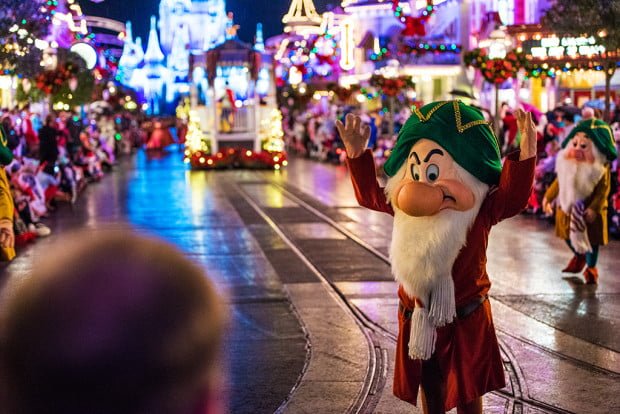 I will also blame the family in front of me. (That photo above is me at them, IRL.) Not only did they have their stroller in the front row with them, but their child wasn’t in said stroller, and was instead on the shoulders of the father. In the front row. Say what you will about the crowds in Tokyo Disneyland, but there is no denying that their militantly-enforced rules requiring the front several rows to be seated during parades makes for a far superior viewing experience.

Unlike Celebrate the Season, my thoughts with the parade are that they shouldn’t fix what isn’t broken. This isn’t to say that the parade couldn’t be updated, and I’ve love to see 1-2 new/updated floats per year (sort of like Vanellope von Schweetz’s new car), but overall, I love this parade and don’t see a need for a total replacement. It’s a classic, but not in the tired, Main Street Electrical Parade sort of way. 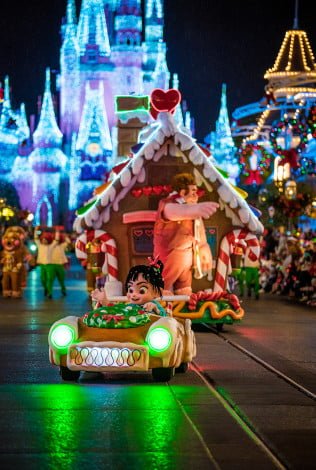 From there, it was time for Holiday Wishes! I got really lucky here. I had a pretty good vantage for the fireworks, but a reader of the blog saw me and allowed me to set up me tripod right next to his on the edge of the Partners planter for an excellent vantage that I assume he staked out hours in advance.

I would have loved to use the fisheye for these shots, but it was still lightly drizzling, and I think my fisheye lens has some sort of hydrogenic charge that attracts water droplets to it (#science). One bead of water on that lens during the fireworks and it’s game over, so I went for the safer option and used my ultra wide angle. Not as impressive with the perimeter bursts, but I do have a lot of good shots that I’ll be editing and posting soon! 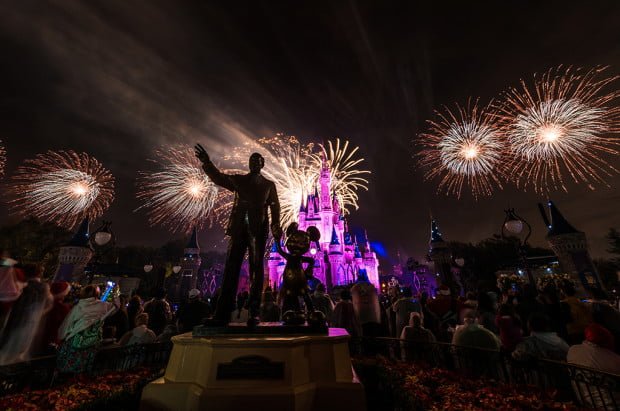 Holiday Wishes is another favorite of mine that I wouldn’t want to see replaced outright. I love the soundtrack for it, and there are some really clever burst sequences (that O Christmas Tree scene is awesome) that would be tough to top. With that said, after seeing fireworks technology evolve pretty quickly in the last several years, culminating with Disneyland Forever! this year, it’s clear that this show could use an update.

Like regular Wishes, I wonder why projection mapping technology hasn’t been added to the show. Celebrate the Magic (one of the most underrated pieces of Disney entertainment anywhere, in my opinion) demonstrates just how effective this can be, and the holiday tag at the end of Celebrate the Magic has some great visuals that would be great additions to Holiday Wishes. I hope it’s only a matter of time until we see these fireworks shows updated to incorporate these modern projections. Oh, and lasers. Definitely more lasers.

We have plenty more ground to cover from Mickey’s Very Merry Christmas Party. On Page 2, we bust a move with Big Al, I yell GET OFF MY LAWN at the children of the Magic Kingdom, and more! Click here to continue reading.