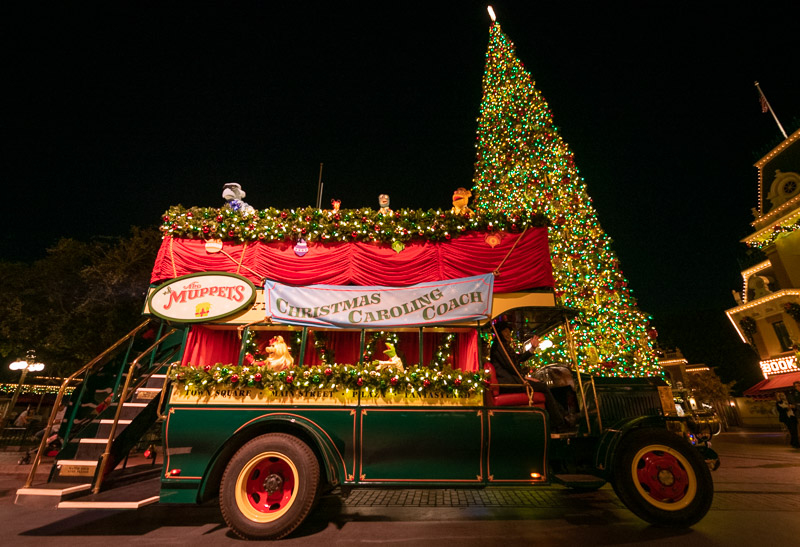 The Muppets Christmas Caroling Coach is the highlight of the holiday season, with the group bringing their unique brand of humor and memorable music to the Omnibus for Disney Merriest Nites on Main Street at Disneyland in front of Sleeping Beauty Castle. This post shares photos & video, behind the scenes info, and our thoughts on what makes this act so special.

For starters, the Muppets Christmas Caroling Coach is presented exclusively at the Disney Merriest Nites Christmas Party at Disneyland. This is the new hard ticket, limited-capacity holiday event with “6 parties in 1” throughout the lands of Disneyland on 5 select nights during the Christmas season between now and December 9, 2021.

We attended the first Disney Merriest Nites Christmas Party at Disneyland and will have a full review and photo report very soon. However, this is the unequivocal standout entertainment of the event for us, and naturally, I snapped hundreds of photos of the Muppets on the Omnibus, so thought I’d share those and thoughts in a quick post first…

For Disney Merriest Nites Christmas Party at Disneyland, the Muppets take over Disneyland’s double-decker Omnibus for a 9-minute show that offers a mix of humor, hijinks, and holiday caroling. The whole entertainment package (or perhaps we should call it an “activation”?) is actually a bit longer than that, as the pre-show audio over speakers, arrival, and departure are all scripted and offer some fun gags and jokes. I’d estimate that the whole thing lasts closer to 15 minutes.

The Muppets Christmas Caroling Coach starts in Disneyland’s Town Square, heads up Main Street U.S.A., circles the Central Plaza in front of Sleeping Beauty Castle, and stops for the show between Plaza Inn and Jolly Holiday Bakery. After the 9-minute performance, the Omnibus heads back down Main Street U.S.A. and out the parade gates near where the characters from Mickey’s Christmas Carol meet guests. 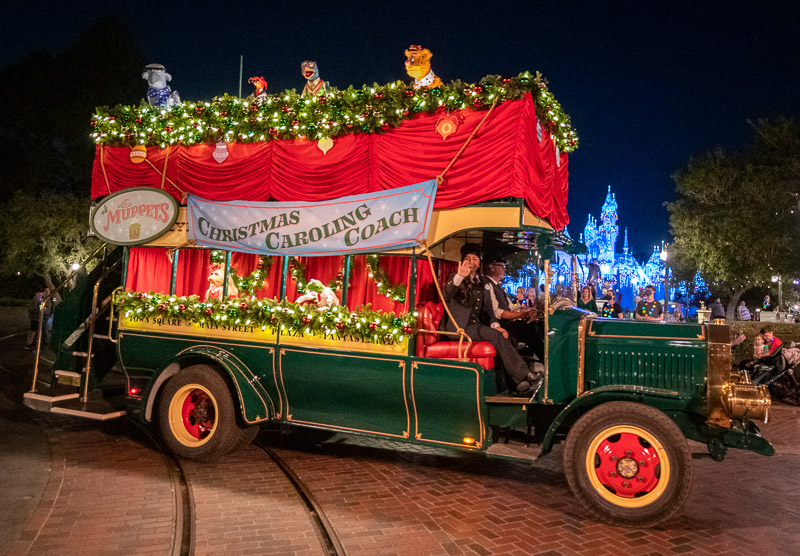 Upon arrival in the Hub, the Muppets lead Disneyland visitors in a singalong of classic Christmas carols, including “Here We Come A-Caroling,” “Feliz Navidad” and “Deck the Halls,” all sung with a Muppets comedic twist.

For the musical grand finale, “Let It Snow” is performed. Spoiler alert: the distinguished duo from the Muppet Labs helps out with the end of the act, bringing a little “snow” to Main Street, U.S.A. 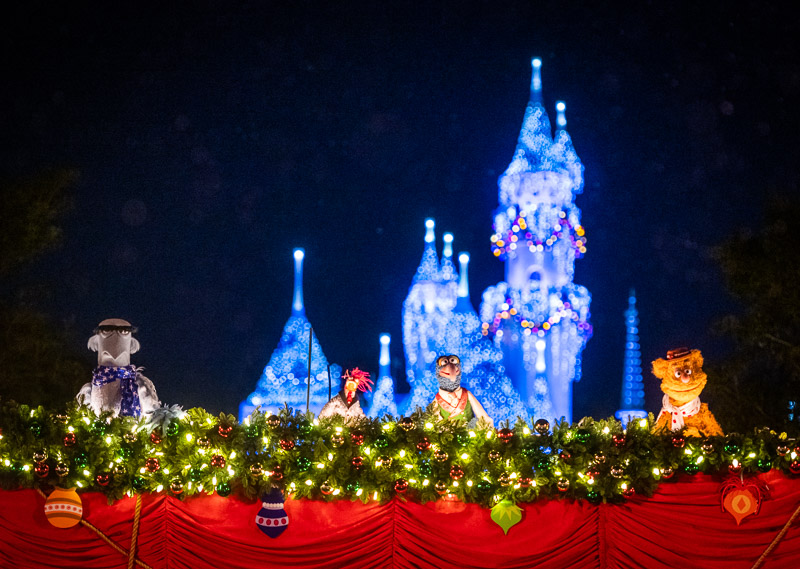 The lineup of characters on the Muppets Christmas Caroling Coach includes Kermit the Frog and Miss Piggy on the lower level of the Omnibus. Sam Eagle, Fozzie Bear, and Gonzo the Great headline the upper level.

In addition to them, Pepe the King Prawn and a bunch of chickens also appear at times up top. (I’ll admit that Pepe is starting to grow on me a bit thanks to his recent performances, but I’d still rather that role by filled by Rizzo the Rat.) Dr. Bunsen Honeydew and Beaker “help” halfway through the show stop from a control center over Disneyland’s speaker system. 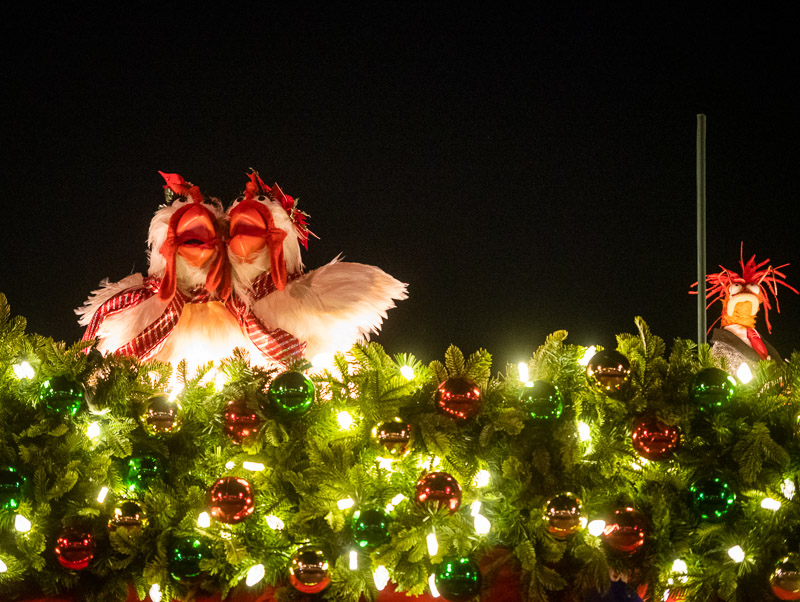 On a practical note, the Muppets Christmas Caroling Coach is performed four times during the Disney Merriest Nites Christmas Party: at 8:10 pm, 9 pm, 10:30 pm, and 11:30 pm.

The second show is shortly before “A Christmas Fantasy” parade steps off, making that by far the most popular of the bunch. You’ll want to skip that performance and instead prioritize picking a parade viewing location. 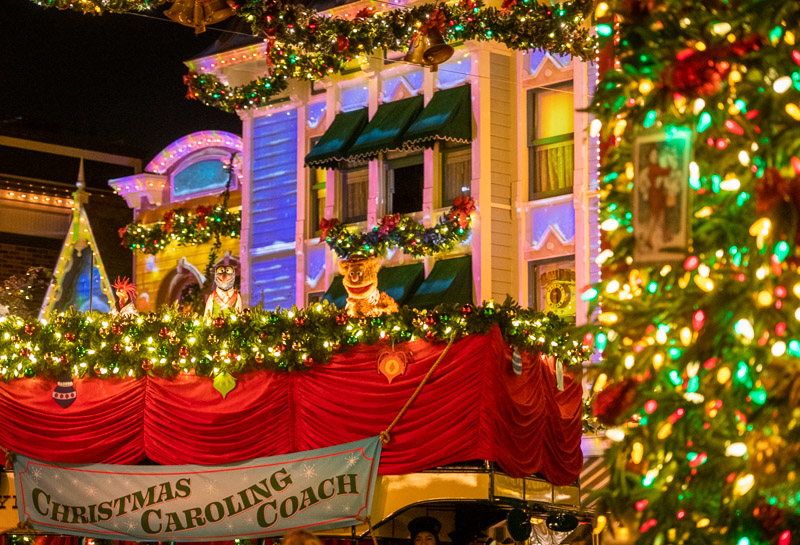 The first and last shows are the least-crowded, and we’d recommend catching one–or both–of those. Perhaps one up close and the other a bit farther back.

Disneyland still has some logistical hurdles for figuring out the viewing situation. Since the Omnibus comes down Main Street, you can’t simply camp out for a spot. You’ll need to wait on the curb and make a dash for the show stop line once the Omnibus passes. 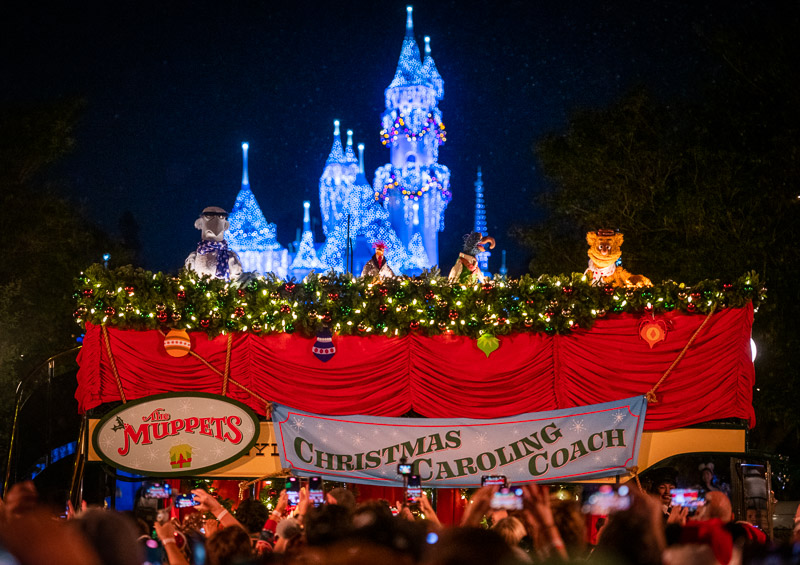 Unless you’re in one of the first few rows of guests, it’s difficult to see Kermit and Miss Piggy. However, the show is still great with only an upper deck view.

Sarah shot a video of part of the performance from up front:

If you just can’t get enough Muppets goodness, here’s another compilation of the Muppets arriving, performing, and rolling down Main Street in the Omnibus:

In an interview with the OC Register, Disneyland show director Jordan Peterson said it was one of the highlights of his career to bring the Muppets to Main Street U.S.A. for a Christmas singalong after the beloved puppets largely disappeared from Disney’s Anaheim theme parks several years ago.

“It’s time for them to come home to Disneyland more consistently,” Peterson said. “This is the first step and I hope it’s the first of many appearances.” 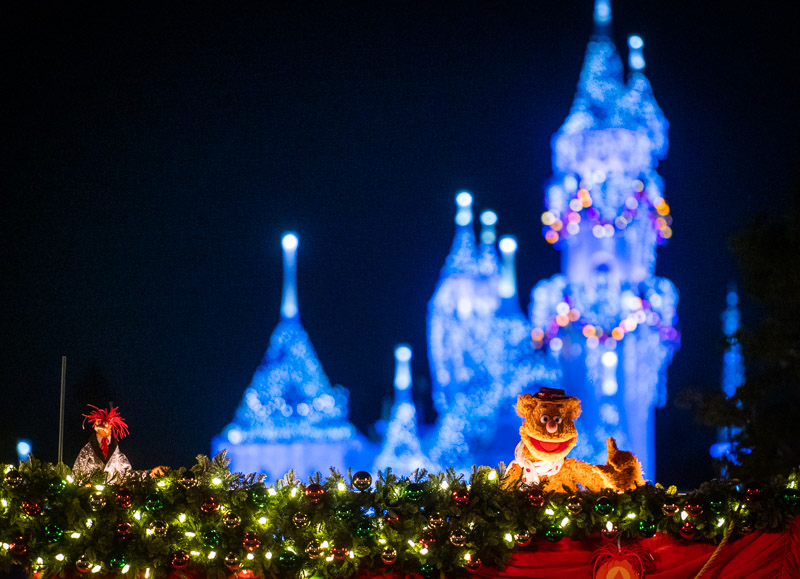 “It’s so exciting to get a chance to see them shine in a way that we haven’t seen in a little while,” Peterson said. “It’s perfect to have them back in Disneyland. It’s been too long.”

Saying he’s been a fan of the Muppets since childhood, Peterson continued, “to say that I was a little starstruck is not an exaggeration at all. It’s just been wonderful.” 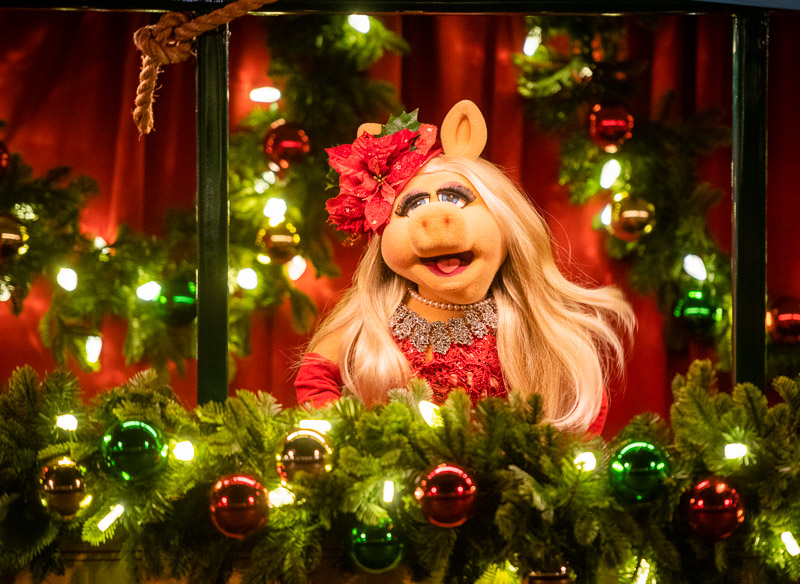 As for our review of the entertainment, Christmas Caroling Coach is the Muppets at their best.

In Disney’s years of stewardship over the Muppets, the characters have been misunderstood or misapplied more often than not. Some of the resulting shows have felt overly cynical, less timeless and too topical, or tonally wrong. 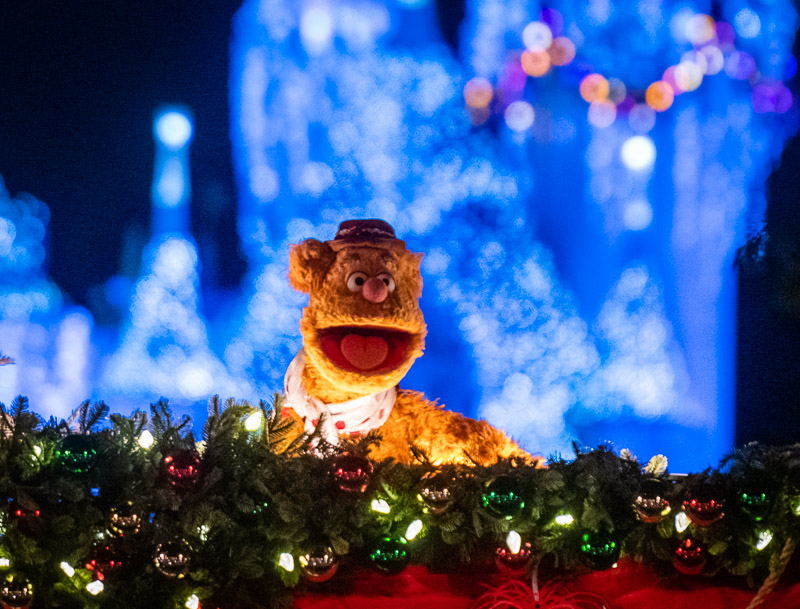 To be fair, this is a delicate needle to thread. The Muppets are a mix of showbiz satire, sarcasm, self-awareness, and sentimentality—all effused with a sense of irreverence, but also heart and wholesomeness.

Even though the Muppets Christmas Caroling Coach is a relatively short show focused on music, this checks all of those boxes. It blends the Muppets, caroling, and Disneyland together perfectly. 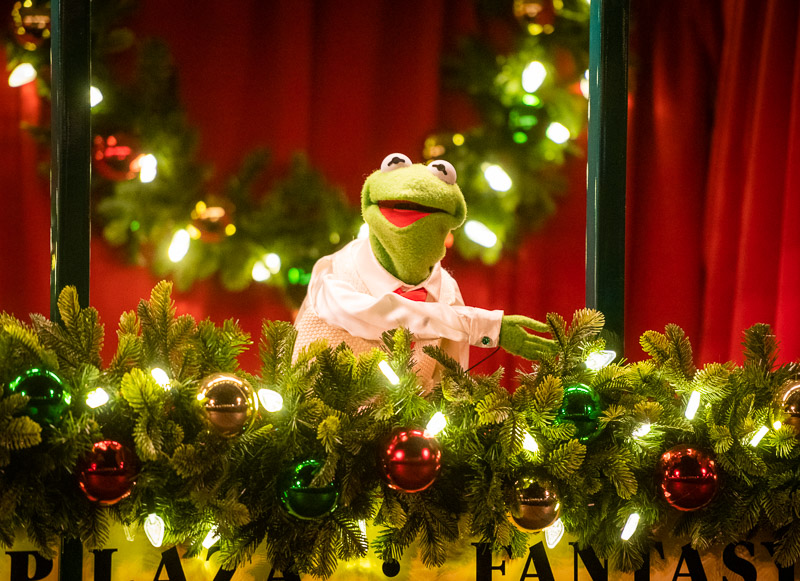 The jokes are sharp, self-referential, and weave in clever references to Disneyland (e.g. Sam Eagle is running behind because he was watching Great Moments with Mr. Lincoln and Kermit “corrects” an audience member who confuses him for Yoda, who is back in Galaxy’s Edge).

The Muppets Christmas Caroling Coach is fantastic, packing a lot into a relatively short span of time, and phoning nothing in. There’s not a wasted moment here–to get the full experience, you’ll even want to follow the Omnibus up and down Main Street to catch some of the funnier jokes (relatively easy, since Disneyland is uncrowded for the event). 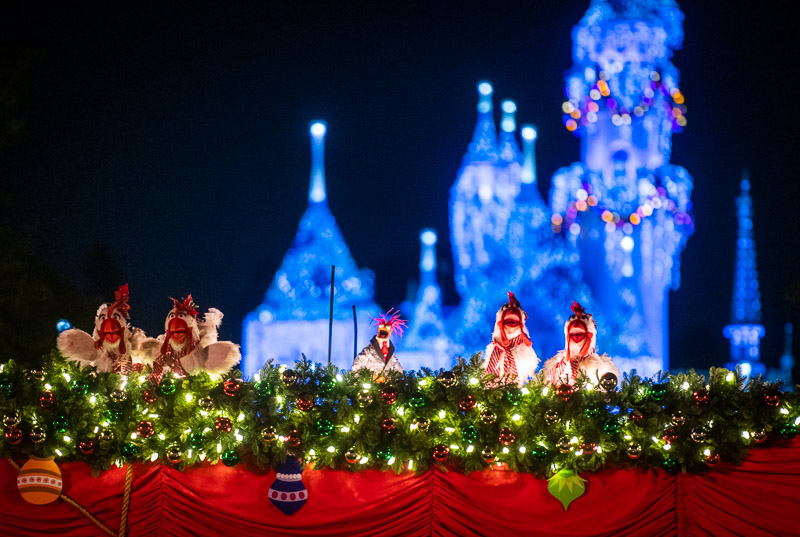 This comes only a month after Muppets Haunted Mansion, the excellent Disney+ special that likewise nailed their humor while also accomplishing the tough task of balancing those characters with the tone of the iconic attraction.

Between the two theme park-centric offerings that truly “get” the Muppets, it feels like they are having a moment after years of hit-or-miss output. 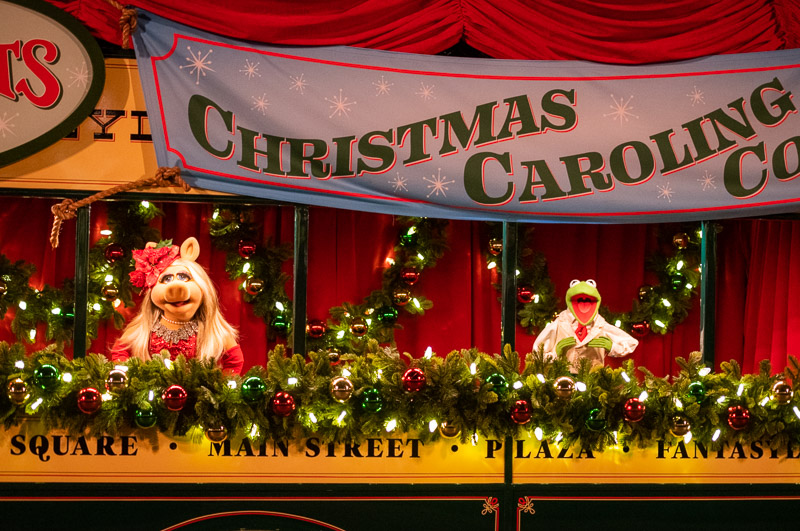 Both are examples of the Muppets in their peak form–arguably the strongest Muppets productions since the mid-1990s. To put this into perspective for Walt Disney World fans, I’d say this is on par with the now-defunct “The Muppets Present… Great Moments in American History” at Magic Kingdom.

We called that show one of the best Disney attractions of the last decade. Sadly for Florida fans, these are probably those same puppets. (I hope that’s not true–it was nice seeing the Muppets last Christmas season in Magic Kingdom.) 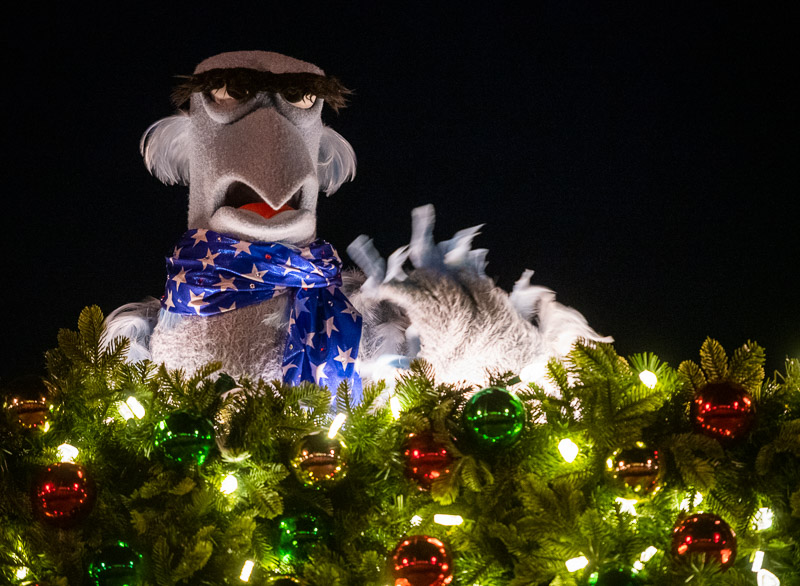 Ultimately, the Muppets Christmas Caroling Coach is so good, unique, and memorable that it alone made the Disney Merriest Nites Christmas Party at Disneyland “worth it” to us.

For most guests, that’s probably an absurd statement–how on earth can a relatively short show justify a $175 hard ticket event?! That’s a totally fair perspective. We are very cognizant of our bias and acknowledge we’re almost certainly the outliers here as Muppets’ fans. 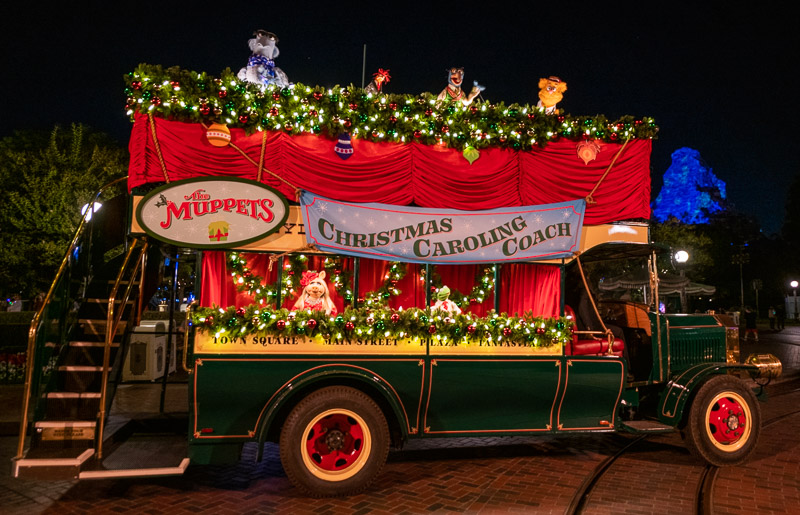 That’s a big part of why this is separated from the main review of the new Disneyland Christmas party. This show is going to resonate with fellow Muppet enthusiasts who will likely share our perspective–but is not a mainstream one or the fair foundation for a review that attempts at objectivity (but will probably fail!).

With the Muppets Christmas Caroling Coach, the incredible characters from Mickey’s Christmas Carol, beautiful sounds of the Handbell Carolers, “A Christmas Fantasy” parade, and just pitch-perfect festive atmosphere, we spent a ton of time on Main Street and had an excellent experience during Disney Merriest Nites Christmas Party at Disneyland. Stay tuned for the full review!

What do you think of the Muppets Christmas Caroling Coach? Happy to see the Muppets getting more love in the parks, or disappointed that (it would appear) the puppets have left Walt Disney World? Thoughts as a whole on Disney Merriest Nites Christmas Party at Disneyland? Do you agree or disagree with our assessment? Any questions? Hearing your feedback–even when you disagree with us–is both interesting to us and helpful to other readers, so please share your thoughts below in the comments!