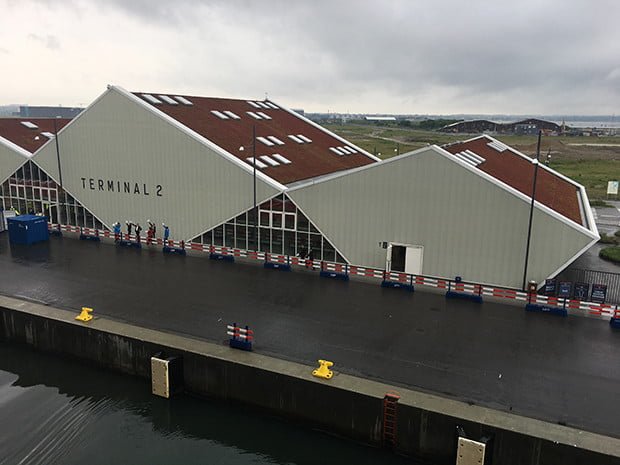 So with zero clothes aside from what I was wearing (which, at least, was three layers–again, small victories), we headed to the cruise port in Copenhagen and boarded the Disney Magic for our Norwegian Fjords cruise. Our first stop was at Guest Relations to report my lost luggage (so they’d know to expect it) and also let them know we might have to cancel our Palo reservation.

If there’s any consolation to this all, it’s that we got to witness Disney Cruise Line’s exemplary guest service in action. In addition to delivering robes to our room, offering us free laundry service, and indicating that there’d be no need to cancel Palo because their wardrobe department would provide me with clothes, they also offered to have a tailor measure me for formal night and provide me something at no charge.

The Cast Member at the desk, and Cast Members who subsequently assisted with the lost luggage were all exceptional. From our stateroom host to Guest Services Cast Members who followed up via phone to ensure we had what we needed–they were all great. I’ve commented in the past that the Cast Members aboard Disney Cruise Line are shining examples of the “Disney Difference,” and these experiences certainly reaffirmed that.

It was also great just to be on the ship. I think we held it together in what was otherwise a comedy of unfortunate scenarios (coming this Thanksgiving: Planes, Trains and Automobiles: Bricker Edition), laughing at the absurdity of so much bad luck. Still, I’m not sure we wouldn’t have had a total meltdown had more gone wrong.

I didn’t mention it before, but when we arrived in Copenhagen’s baggage claim and saw the Disney Cruise Line reps, we were overcome with excitement. We raced to their podium and exclaimed that we were there for the cruise, and they started looking for our names. Of course, it was for airport transfers…which we did not book. (We used public transit to get to the port.) Just seeing the podium in the airport was like a desert oasis! 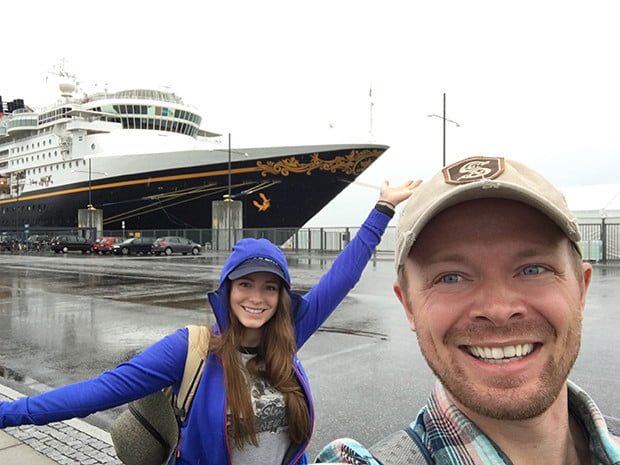 Once we were on the Disney Magic, everything started turning around. We saw cheery Cast Members in traditional Norwegian attire (of course I didn’t think to take any photos), heard the familiar background music, and were in a place we loved.

The trip had taken a complete one-eighty. 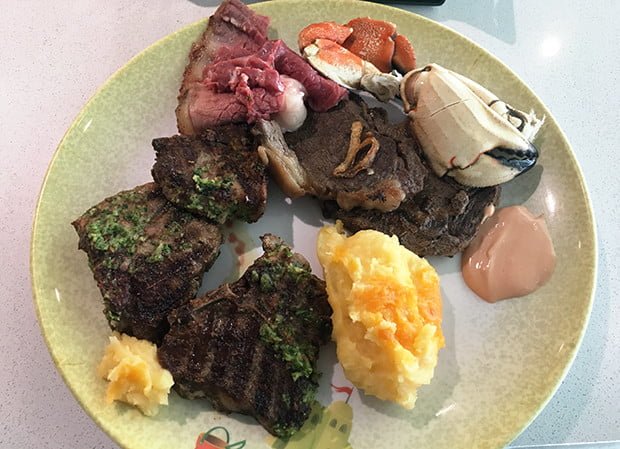 After that, we headed up to Cabanas for lunch. As far as buffets go, this is a solid option, I think. There are some items that are certainly misses, but plenty of worthwhile choices, too.

Following lunch, I have to admit that we were in a bit of a daze. We only had a couple hours of sleep the night before, and that coupled with eating our weight in buffet food had us ready to just sleep under the table at Cabanas.

I know we did something else after lunch before heading to our stateroom, but I’m not entirely sure what. Perhaps we did just fall asleep under the table until our stateroom was ready. 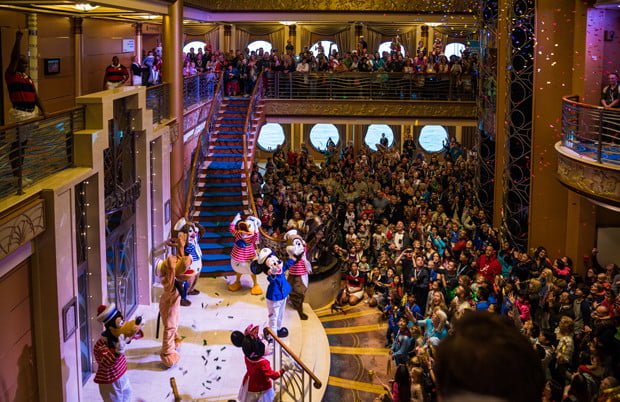 We also saw the Sail Away Celebration, which was in the atrium. This is always a fun way to kick off a cruise.

In any case, once our room was ready, we headed there. Our room was nothing special, being a standard inside stateroom on floor 6. I suppose a downside of booking the IGT rate is that you cannot choose your stateroom, but we really didn’t care. 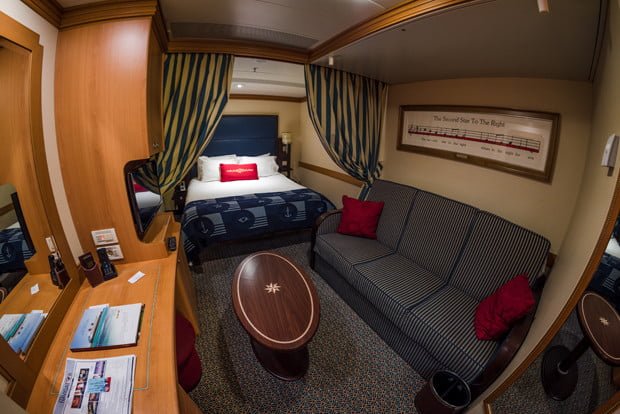 The room was sufficiently large and well-appointed for our purposes, which would basically just be getting ready and sleeping. We did not intend upon spending much time at all in the room. Except for now: nap time. 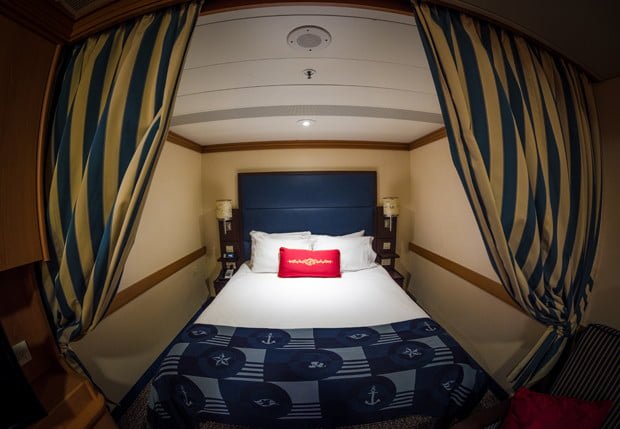 We were awoken by the sound of the assembly drill buzzers. You know that feeling when you’re doing some exceptional work napping and wake up and are so disoriented you don’t know if it’s still the same day or the following morning? That’s what I felt, along with a general sense of “where am I?!” It was a productive nap. 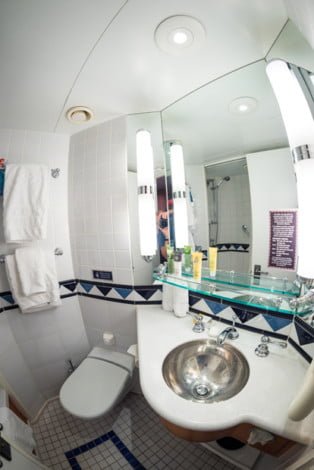 After the assembly drill, we wandered around the ship some more. The experience I was most looking forward to on the first day was the gift shops opening. I had been in the same clothes for over 2 days, and was ready for some fresh attire. 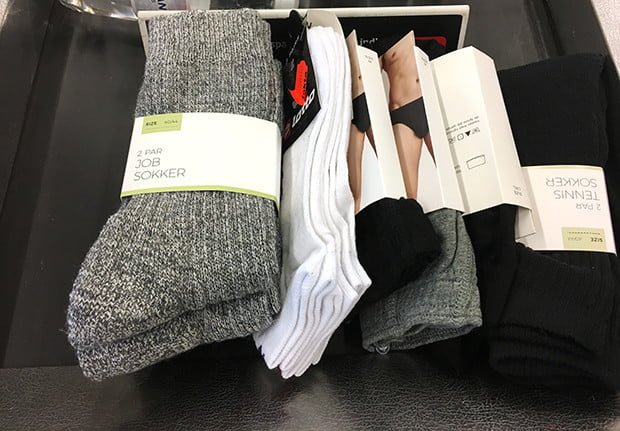 One of the accommodations Lufthansa had made was the promise to reimburse us for clothing purchases (50% if I keep the clothes, 100% if not), so I was prepared to go nuts purchasing Disney Cruise Line Norwegian Fjords exclusive merchandise.

I had already bought underwear and socks from a dollar store in Copenhagen on the way to port, so I was at least ready to roll in two departments! 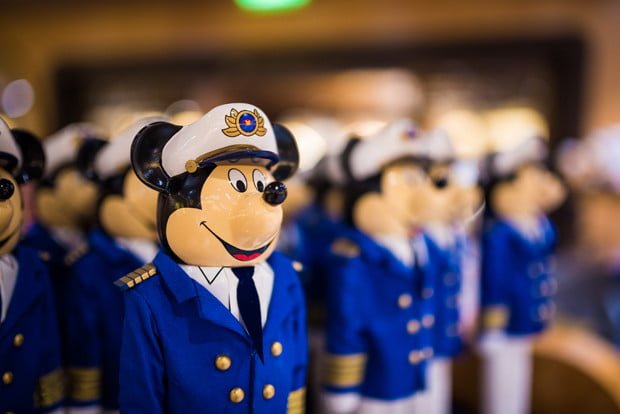 We “rope-dropped” the gift shops and were quite disappointed. Even before getting 50% off and needing new clothes, we had looked at old Parks Blog posts and were excited about some potentially cool merchandise for this cruise.

There was nothing like that. Instead, there was one long-sleeve shirt for men, one for women, one for kids, a couple of lightweight coats, and cups. I was prepared to buy the entire inventory, but instead got only the lightweight coat. I also bought a Tervis tumbler (my first!) with the logo below on it. Why they couldn’t put that logo on a plain men’s shirt confounds me. 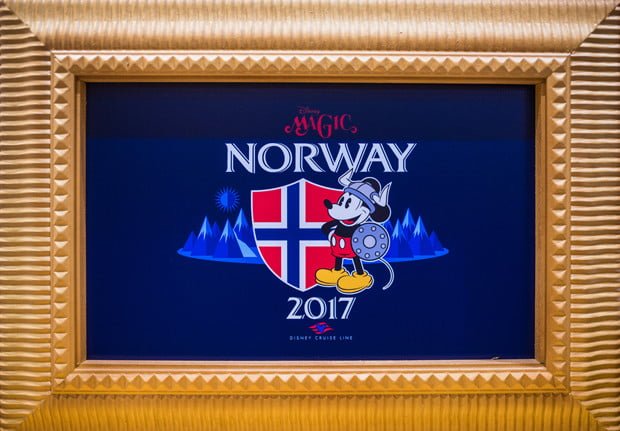 I’m probably going to kick myself for not buying more general Disney Cruise Line merchandise if Lufthansa actually does reimburse me for the coat (I’m a bit worried since it was booked via United miles that they’ll try to pass the buck and I won’t ever receive payment), but there was just very little merchandise in general that appealed to me. I figured I’d buy stuff our first or second day in port.

After shopping, it was show time. For night 1, it was “Be Our Guest: Welcome Aboard Show,” which featured the entertainment director Clayton (who was awesome) along with a musical montage from the various shows.

It also included a sketch from comedian/magician Danny Buckler, a hilarious Brit. We really enjoyed his self-deprecating, wry style; it worked well with the particular audience on this cruise, but perhaps wouldn’t have played as well with an audience of mostly-American families. 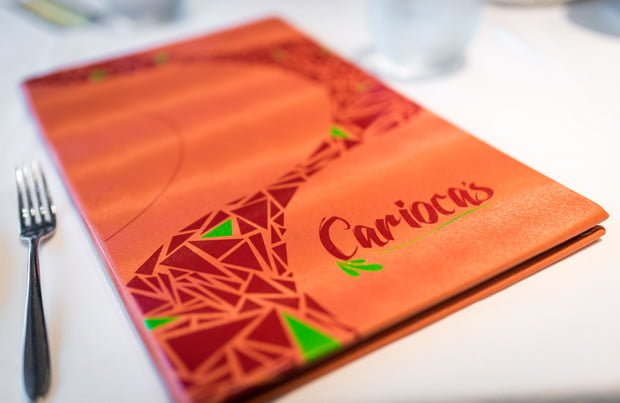 Dinner that evening was at Carioca’s, which is themed to a Brazilian festival with nods to Disney’s The Three Caballeros and menu consisting of South American cuisine. Normally.

For our cruise, the South American cuisine was still present, but there were also regional inspirations on the menu, so Scandinavian cuisine. This was a pleasant surprise. When we were weighing this cruise versus Norway on our own, one of the concessions we figured we’d have to make was in terms of food. We’d eat more and better quality food on the cruise, but assumed it would not be anything unique to Norway.

We were not too disappointed by this. We assumed the scenario would be similar to Switzerland, where even low-end food is incredibly expensive, and you are not tasting the best of the cuisine unless you shell out serious money–something we would not be willing to do.

Here’s what we had for dinner: 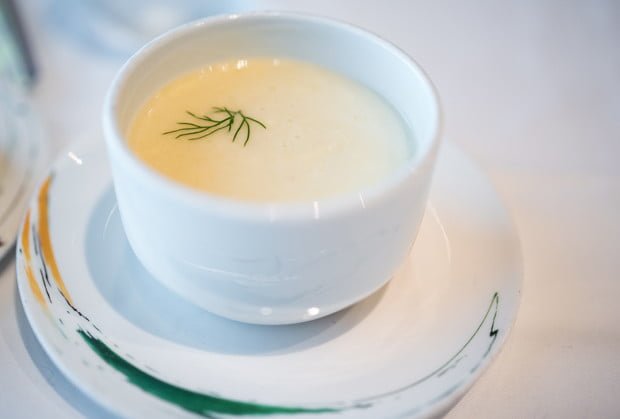 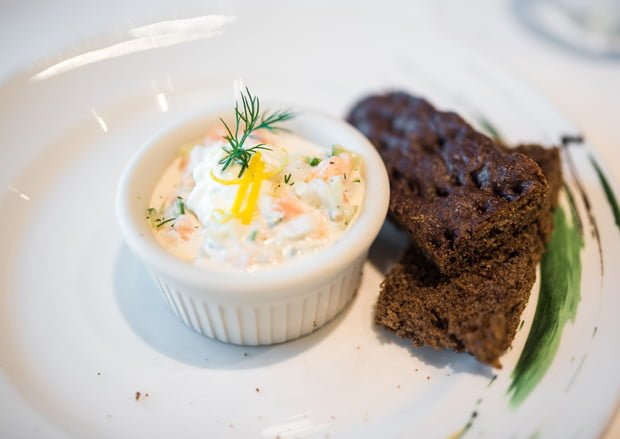 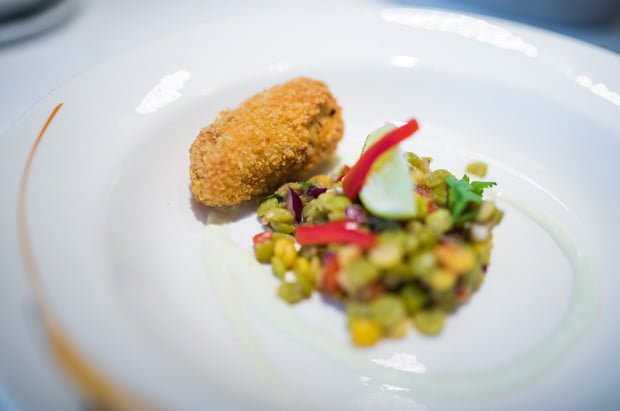 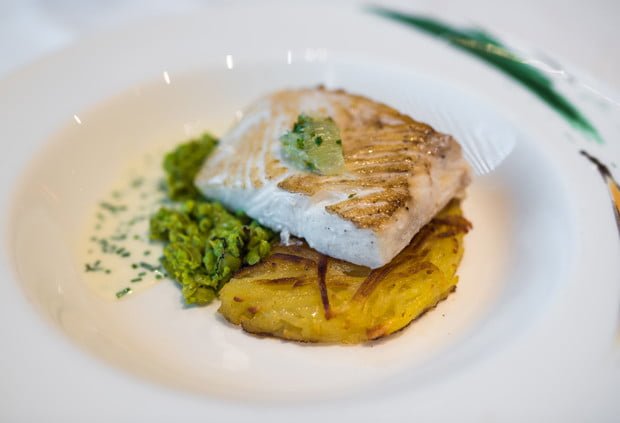 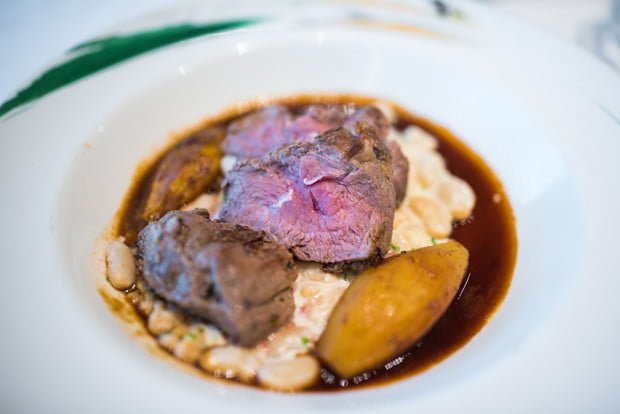 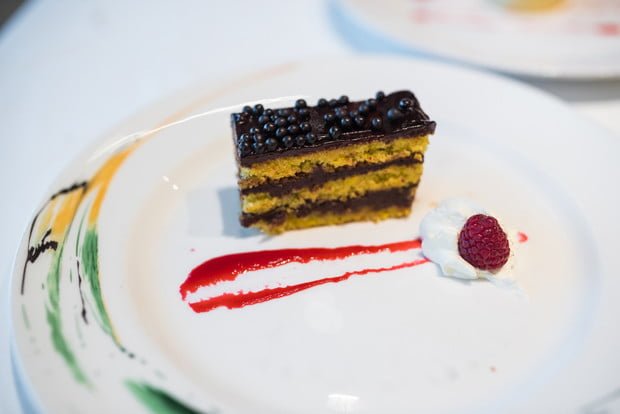 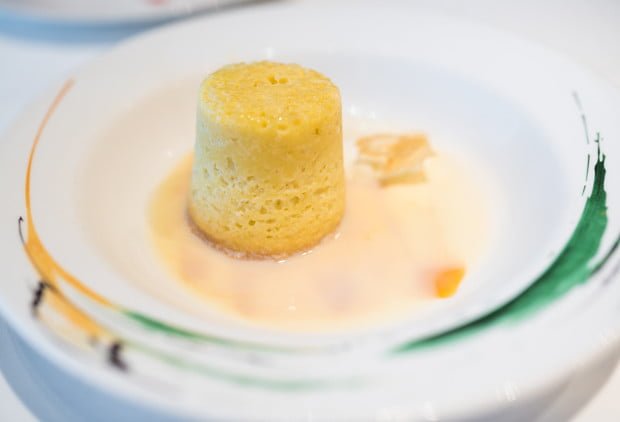 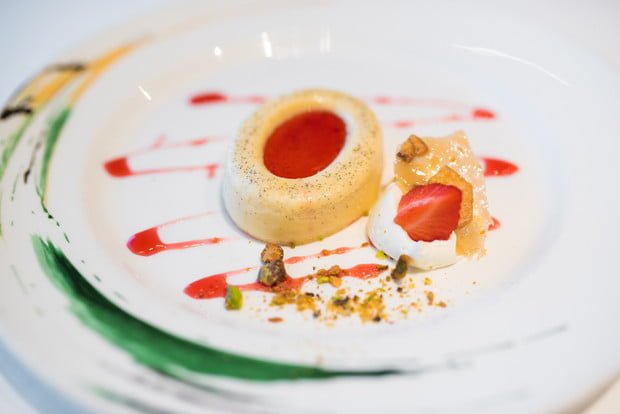 It probably does not bear repeating that we’re pigs–we ordered all of the regional inspirations at Carioca’s plus a couple of other things. I cannot fathom how much this meal would’ve cost in Norway, but my guess is “a lot.” (Then again, we wouldn’t have ordered so much if we were paying out of pocket.)

While I suspect all of the Scandinavian cuisine we tried was “Disneyified” to some degree (or perhaps not–Scandinavian cuisine does not seem particularly ‘exotic’ to an American palate), that’s fine. We don’t know any better, and it was great to have thematically-appropriate food on our trip to Norway. 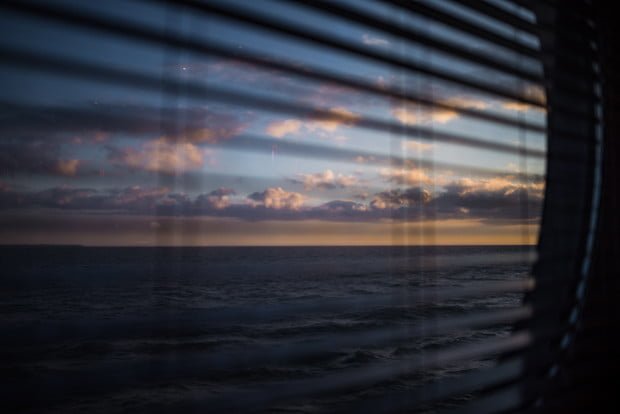 It was also cool to still see daylight outside our window during dinner at ~9:30 p.m. 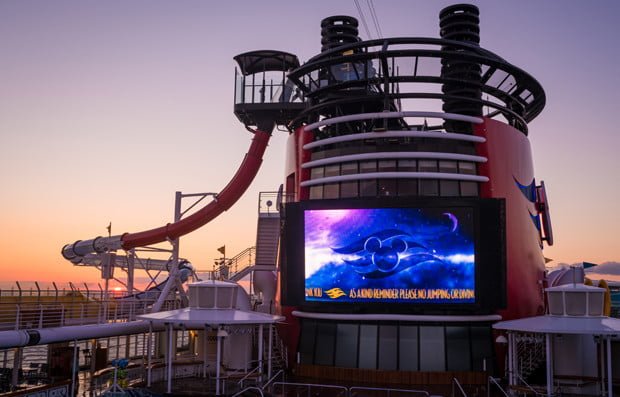 We were done with dinner at around 9:45 p.m., and it was still light out, so we headed up to the deck for sunset. Sunset that evening was around 9:50 p.m., which was actually the earliest sunset of the entire cruise. It was cool experiencing daylight pretty much no matter what time you went up on deck. Over the course of the entire cruise, I never saw the night sky once. I knew I was unlikely to need my tripod for this cruise, but I had packed it anyway, hoping to use it that first night. Alas, it was in my lost suitcase, so I decided to call it an “early” night instead. Hope our travel misadventures and first day of the cruise report were not too much of a bore…

We pick up from this point with our first day at sea in part 2!

If you’ve been, what do you think of Norway? Have you considered (or done) Disney Cruise Line’s Norwegian Fjords itinerary? Any thoughts on our adventure in simply getting to Copenhagen to board the Disney Magic? Thoughts on Disney Cruise Line’s service, the cost of visiting Norway, cruise cuisine, or anything else we’ve covered in this cruise report? Any other tips to add or recommendations? We love hearing from readers, so if you have any questions or thoughts, please post them in the comments below!