The Osborne Family Spectacle of Dancing Lights ran at Walt Disney World for 20 years, but won’t be displayed in 2016-2017 due to Star Wars Land that began in April 2016. While this is a bittersweet ending to a great chapter of Walt Disney World Christmas history, we’re optimistic that Star Wars Land will be “worth it.” Read our “That’s a Wrap!” post for more reminiscing about the Osborne Lights and other now-extinct areas of Disney’s Hollywood Studios. What follows is historical info about the Osborne Lights from previous years as a sort of time capsule…

There are currently rumors of another, different light display replacing the Osborne Lights (possibly in a different park or Disney Springs), but those are simply rumors at this point. If you’re going to Walt Disney World this Christmas, definitely make sure to spend some serious time at the Osborne Lights, as it’s your last chance.

More on that below, but suffice to say, be prepared for being squashed among other people when you visit the Osborne Lights…

When it comes to the Osborne Lights, “light display” is severely under-selling it. More like, amazing, light-up-the-entire park epic dancing light extravaganza! That’s right, the lights dance to awesome Christmas songs by the likes of the Trans-Siberian Orchestra (if you’re going to have a dancing light show, you better include music from TSO!) and many other legendary Christmas artists. The lights are so vibrant and plentiful that even Clark Griswold would be proud.

Approximately every 10 minutes, the lights dim and then begin their “show” as they start rocking out (dancing) to holiday music. The songs include:

Most people know the story of the Osborne Lights by now, but if you don’t, here goes. The Osborne Family Spectacle of Dancing Lights began in Arkansas when Jennings Osborne put up a lot of lights one year for his daughter, Breezy.

Every subsequent year, he added more and more. Some of these light displays were just plain crazy (you can still find some of these odd items on display at the Studios), but crazy in a good way.

Ordered to dismantle his awesome display (as Sam the Eagle would say, the judge must have been distinctly un-patriotic), the Osborne family decided to share their lights, and offered the display to Walt Disney World Resort. You can read the full story here–it’s pretty heartwarming and has a bit of a fairytale ending.

The display first ran on Residential Street, but when that was eliminated for Lights, Motors, Action!, the display was expanded and moved to the Streets of America. The Osbornes were special guests for the lighting ceremony of the lights at Walt Disney World numerous times throughout the years.

In 2011, Jennings Osborne passed away. In the years since, Walt Disney World has added a nice tribute to him in the form of a lone white angel amongst the angels that circle the globe. A fitting nod to the man who created that shine so brightly on the ‘World.

Before I get ahead of myself with the review, here are some tips…

In the way of tips, there really aren’t many. When The Osborne Family Spectacle of Dancing Lights are running, the Streets of America can get packed. This is especially true for 2015, as many locals are reportedly visiting often to see the Osborne Lights in their last year, and many tourists are making special trips down to Walt Disney World to see the lights. In other words, the Streets of America are always going to be crowded this year–it’s just a matter of how crowded.

Before you even get to the park, though, you should know about the parking situation (if you’re driving) that has been occurring regularly since the beginning of December 2015. Basically, from mid-afternoon on, guests trying to park at Disney’s Hollywood Studios are being redirected to Epcot and bussed over to DHS. This is every bit as inconvenient as it sounds, and if you can avoid driving to DHS, you really, really should. (We’d go as far as to recommend walking from International Gateway in Epcot to DHS as the most convenient option, as traffic has been bad, too.)

As for the Osborne Lights themselves, right when the lights are turned on is the absolute worst in terms of crowds. We highly recommend avoiding the lighting ceremony (it’s not really that cool). In fact, for the first hour or two of operation, it’s really difficult to move through the Osborne Lights, so our tip is to wait until after this.

Once you are on the Streets of America, head towards the side streets or the sidewalk of the main streets to get out of the sea of people. If you’re standing in the center of the street, expect to be bumped, pushed, and just generally “touched” by a lot of other people trying to get past you. (This might sound like an unpleasant experience, but really, the Osborne Lights are awesome–and worth it.) 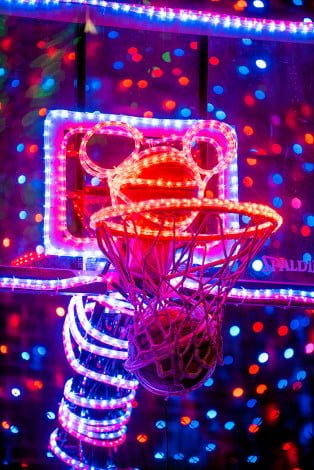 In terms of crowds, we have found that the Osborne Lights are the least busy on nights when Disney’s Hollywood Studios does not have Extra Magic Hours and there is not a Mickey’s Very Merry Christmas Party taking place at the Magic Kingdom. Crowds are also lighter during showings of Fantasmic and at the very end of the night.

Although this can be one of the best times for photography since you will have the deep blue dusk sky to compliment the colorful lights, you will find crowds to be much lower if you wait. As far as photography goes, in general, the lights actually aren’t much of a challenge.

It’s so bright back here that most cameras should be able to handle photographing the lights fairly easily in an auto mode. If you shoot in manual modes, consider opening up the aperture a bit (wide open isn’t necessary). You might also have to lower the shutter speed a tad and raise your ISO a tad.

All in all, though, the Osborne Family Spectacle of Dancing Lights is probably the single-easiest environment for nighttime photography at Walt Disney World from a technical perspective since the lights are so bright. The real challenge is avoiding the crowds to take the photos! For thorough photography advice, read our Christmas Photography Tips post.

In years past, the lights have not been turned off until one hour after the park closes. This is true every night except when on the rare nights when there are private events. Heading over to the Osborne Lights around forty-five minutes before park closing will give you time to explore the display, stay after closing, and avoid the crowds.

Note that if you’re only visiting Disney’s Hollywood Studios for one night, this strategy can be a bit risky, as there are a lot of nights when Disney’s Hollywood Studios books private events for after park close. Sometimes these events include private showings of the Osborne Family Spectacle of Dancing Lights, in which case they clear this area out shortly after park closing.

Given that you won’t know if this will occur on the night you visit or not, I recommend planning to be off the Streets of America by 15 minutes after park closing–if you’re able to stay longer (and you should be able), that extra time is just icing on the cake!

Definitely make sure you give yourself enough time to see the lights, as there are a lot of “Easter Eggs” to look for within the Osborne Lights. Sarah and I typically spend around 4 hours per trip, spread out across a couple nights, wandering around the lights. You definitely don’t need to stay that long to enjoy it, but I also don’t recommend planning to go for 10 minutes, looking at it, and checking it off your “list” of things to get done. It’s a special experience that takes a little while to fully absorb. Slow done and soak it in.

The one Easter Egg you will most certainly want to find is Baby Sinclair. He’s located back on the left side of San Francisco street, and is easily my favorite thing about the Osborne Lights. Make sure to use #BabySinclair on social media to hype him up! 😉

As far as a review goes there isn’t really much to say. The Osborne Family Spectacle of Dancing Lights are one of the highlights of Christmas at Walt Disney World, and are absolutely not to be missed. I have absolutely nothing negative to say about this display, other than that it makes the Streets of America really underwhelming the rest of the year.

We could stand around and stare at those lights for hours, and hours, and hours. If you want to learn more about the Osborne Lights, you should definitely listen to WDW Today Episode 802, an interview with John Phalen, Show Director, The Osborne Family Spectacle of Dancing Lights. 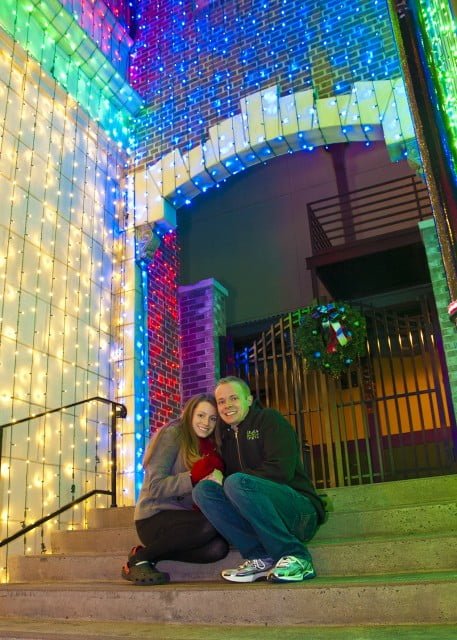