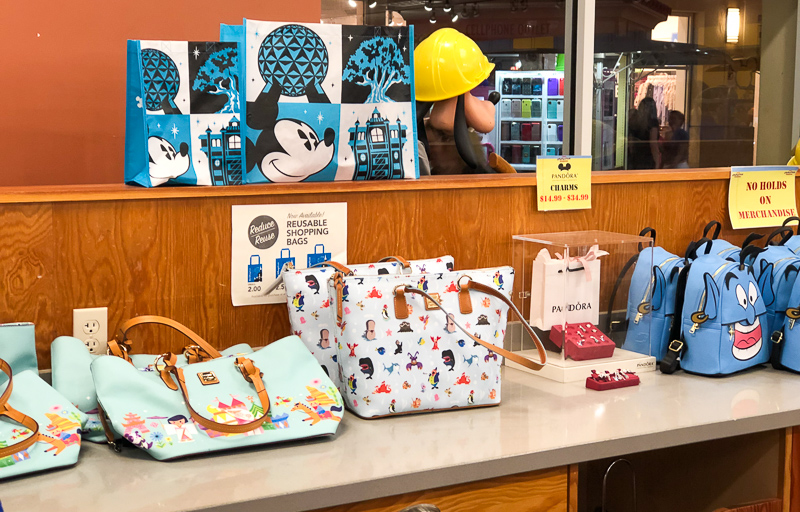 We’re back with another installment of the Walt Disney World Outlet Photo Report, following last month’s “Disney’s Longest Line in Florida is at Character Warehouse!” That one took a look at a popularity proliferation and a slew of resulting policy changes, and offered some speculation about it all.

This month, we return to the Disney Character Warehouse Outlet to share new photos that offer a look at the current inventory and policies. Note that this should be viewed as a “just for fun” post rather than an actual shopping guide for Orlando’s outlets. Some items sell out in hours (or less!), while others languish on shelves at Character Warehouse for months.

There are two Disney Character Warehouse Outlet stores in the Orlando area. One is on Vineland, somewhat near Disney Springs. The other is on I-Drive, closer to Universal. We always do the Vineland location because it’s more convenient and parking is less of a hassle. As always, we recommend reading our How to Shop the Outlet Stores for Discount Walt Disney World Merchandise guide for more background info on these stores…

In response to our last outlet report, there was a lot of speculation from readers about the cause of the long lines, and who, specifically, “ruined” Disney Character Warehouse for everyone else. Many of you pointed fingers at YouTubers, social media, and blogs such as this one.

Amusingly (at least to me), reader’s of Derek Burgan’s outlet report blamed this sudden popularity explosion on someone interesting: him.

Facebook not happy with the Disney Outlet Report. https://t.co/8jHTGVlda2 pic.twitter.com/VQgbEVDsdq

Like those readers, I tend to attribute much of what’s wrong with the world to Derek Burgan. Sadly, in this case, I don’t think that’s entirely fair. He’s been writing about Character Warehouse for 6 years, and these stores have been discussed on Disney forums and social media for as long as I can remember.

I do find it endlessly amusing that people think the Orlando Premium Outlets, of all things, were ever a “well kept secret,” “local resident secret” or “tourist free things for locals.” This is–no joke–the equivalent of complaining that Sharknado ruined the Hollywood Sign or The Office ruined Niagara Falls for locals. These outlets have always been overrun with tourists. When it comes to touristy spots, the outlets are literally worse than any of Walt Disney World’s theme parks. 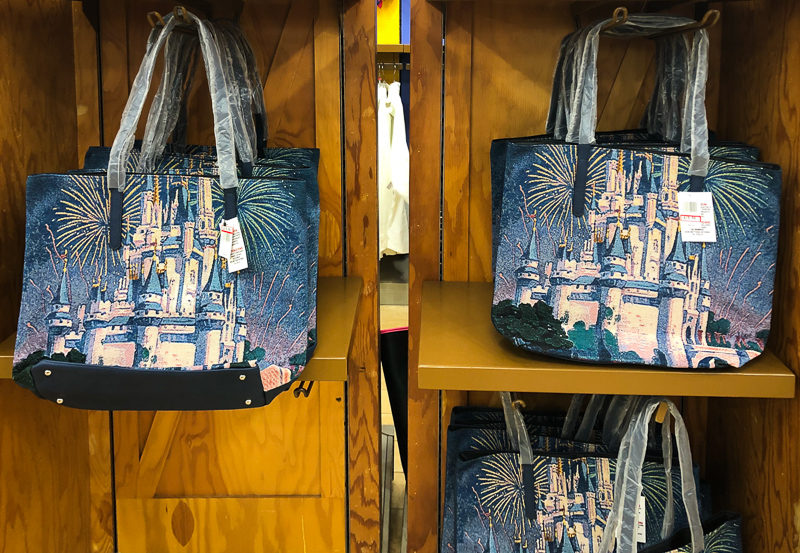 Nevertheless, I’ll play along and honor the locals by reiterating just what a bad idea it is to go to the Orlando Premium Outlets. The parking situation is a nightmare, stores are crowded, too many people are pushing around full-sized luggage, the place is huge, and often chaotic.

If you go during the day, you’ll often encounter a line to enter Disney Character Warehouse. If you go in the evening (which is when we go), you’ll almost certainly find shelves that are picked over, with the best deals already being sold out. If I had limited vacation time and visited Walt Disney World once per year (or less), there’s no way on earth I’d allocate any of that time at the outlets. I barely want to go even when we’re literally driving right past them on the way to get groceries.

Anyway, let’s take a look at some great finds at the Disney Character Warehouse Outlet for October 2019: 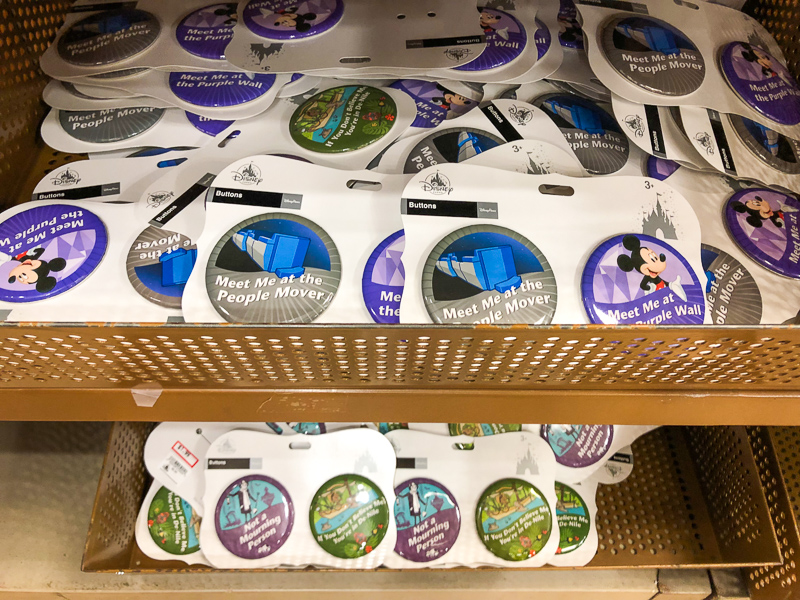 A bunch of these buttons made it to the outlets.

I’m sort of surprised, as I like these. Not the Purple Wall one, but the idea in general. Had been paired by interests, I wonder if they would’ve sold better in the parks. 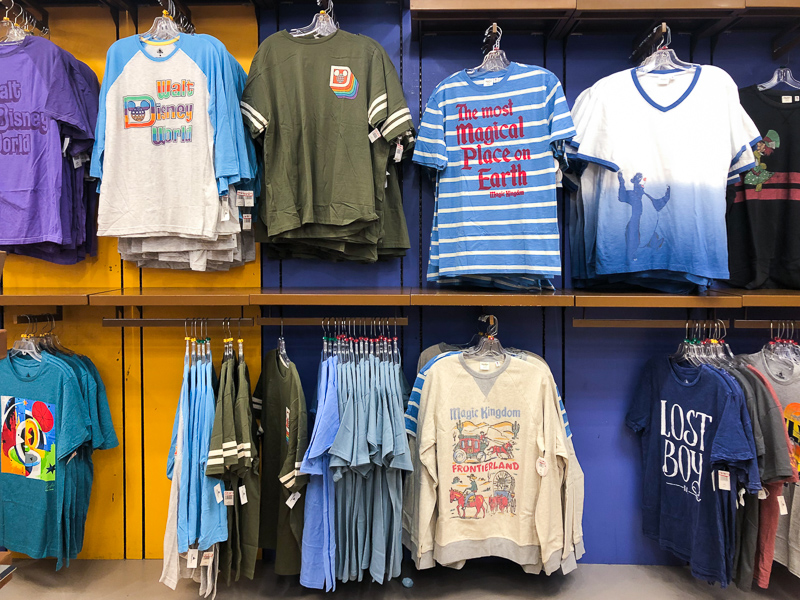 Here’s a look at one shelf of shirts, some of which are the same as what we saw last month.

Lots of good options here, with something for everyone. 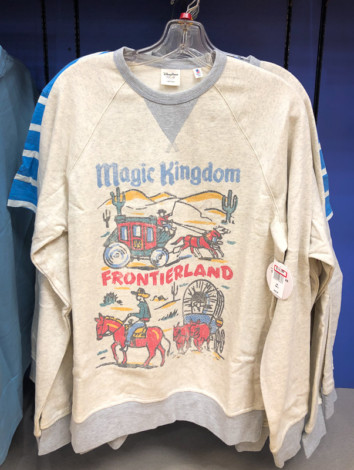 This sweatshirt is far and away my favorite, and I was thisclose to buying it.

However, Sarah reminded me that I already have a large collection of sweatshirts, flannel shirts, and coats…despite living in a place where it drops below 80 degrees for approximately 3 weeks per year. (In my defense, it can get really cold those three weeks, which is why I’ve been stocking up!) 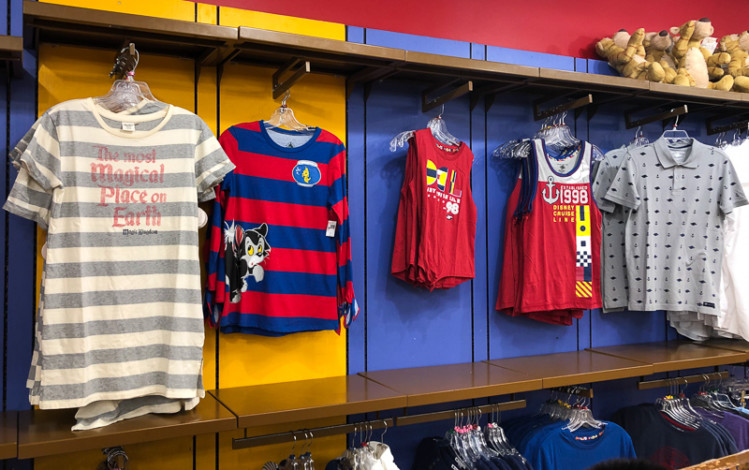 We raved about this line when it was released–I think this features some of the best Disney Parks merchandise designs in years. These particular items aren’t the best exemplars, but it’s nonetheless disheartening to see so much of this line end up at the outlet. 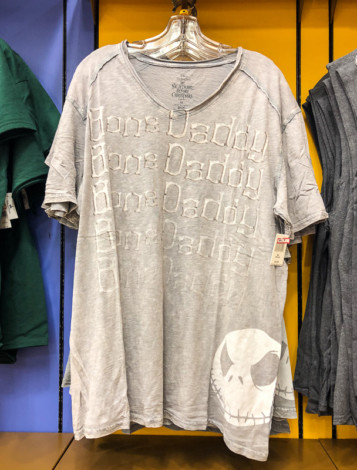 Then there’s this. In case you can’t tell, this shirt says “Bone Daddy.”

Maybe our minds are in the gutter (both of us, not just me), but Jack Skellington is not what we think of when we hear that term. 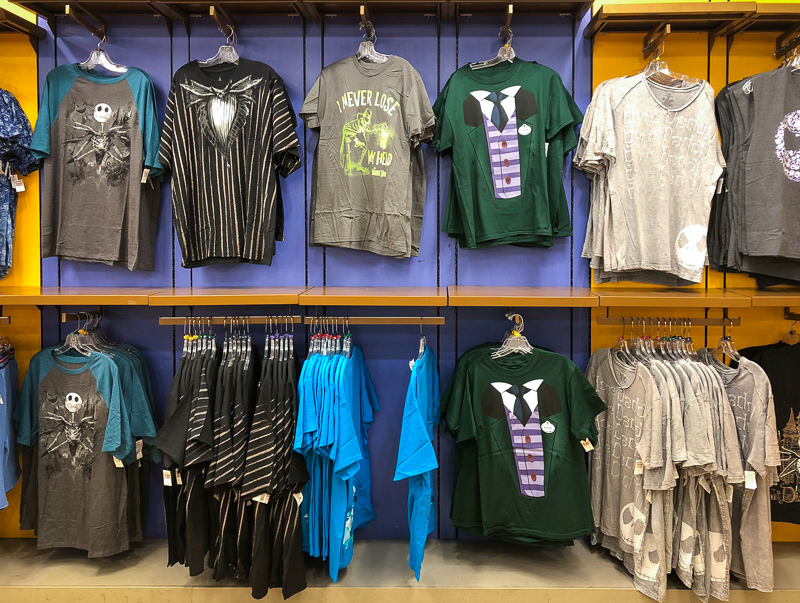 This entire wall is pretty bad.

I guess on the plus side, if you’re going to buy a hideous or weird shirt, you might as well get one that says “Bone Daddy.” At least that’ll elicit a (very juvenile) laugh out of people like us. 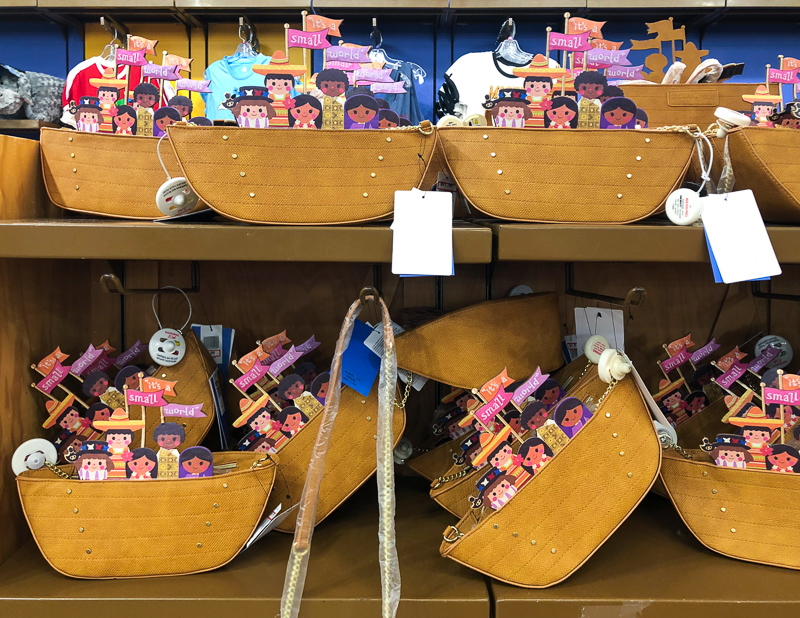 Despite it being an hour before closing, there were lots of good purses out on the shelves and behind the counter.

Granted, I know zilch about purses, but I was under the impression these are one of the ‘hot things’ currently selling out quickly at the outlets. (The other hot things are the ear headbands, which typically cost $.99 to $4.99. We didn’t see a single pair of those this visit. The shelves where they would’ve been were entirely bare.) 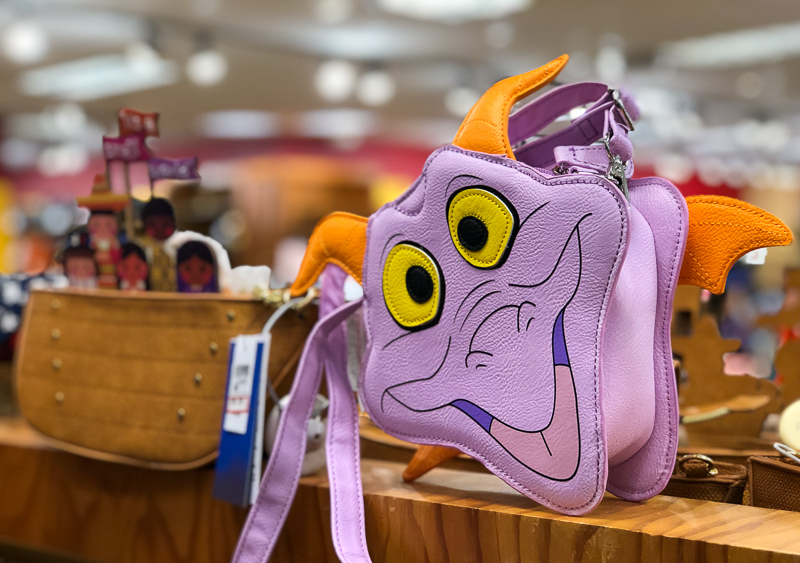 On the purse shelves, there are several options. Namely, the ‘it’s a small world’ purse above and this Figment one (both of which felt cheaply-made to me, but what do I know). There were also Loungefly backpacks and a few different varieties of Dooney & Bourke bags behind the counter.

My mom ended up being an it’s a small world Dooney & Bourke bag. It seemed nice. Probably not $198 nice, but the outlet price seemed more in line with reality. 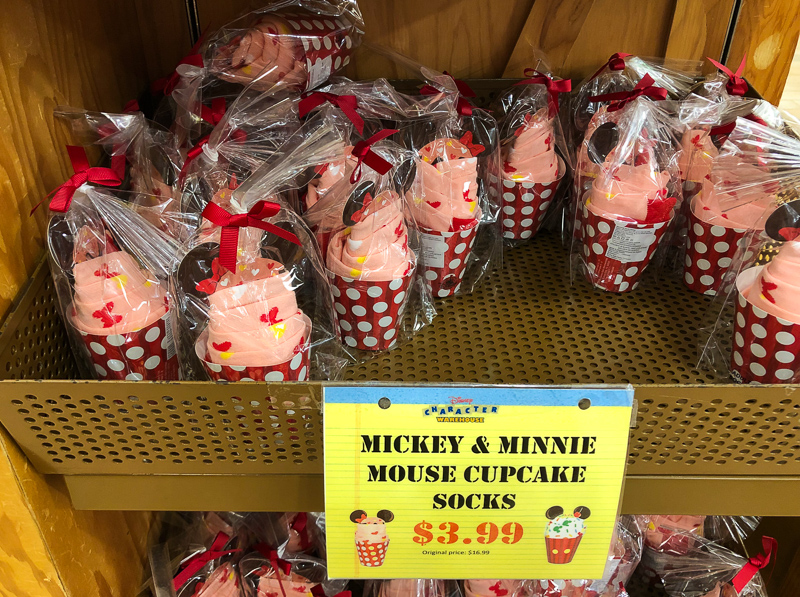 I certainly don’t think socks are worth $16.99 just because they in cupcake packaging, and I wouldn’t pay $3.99 for them, either.

I did just get some nice woven socks from UNIQLO for $1.90, however. (Because I know you were all on pins and needles about my sock situation.) 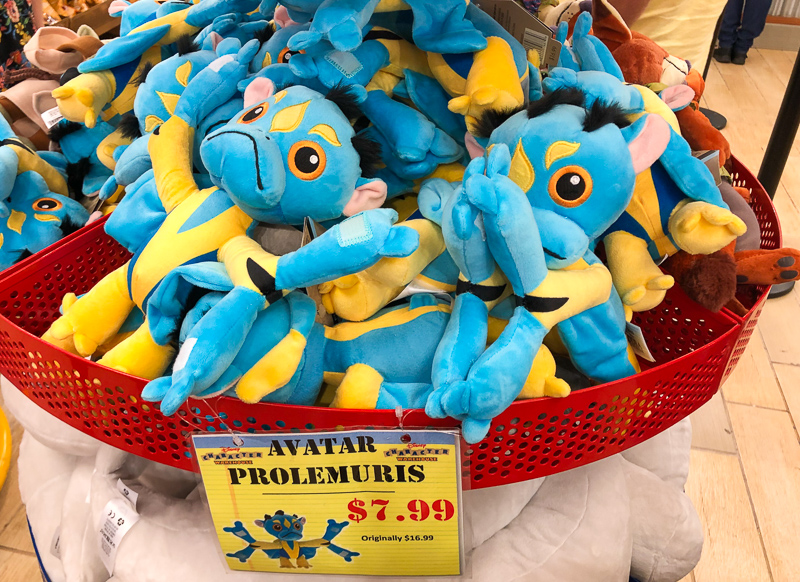 I don’t know what this is.

(That line could be used to describe a good 80% of the Avatar stuff that ends up at the outlets.) 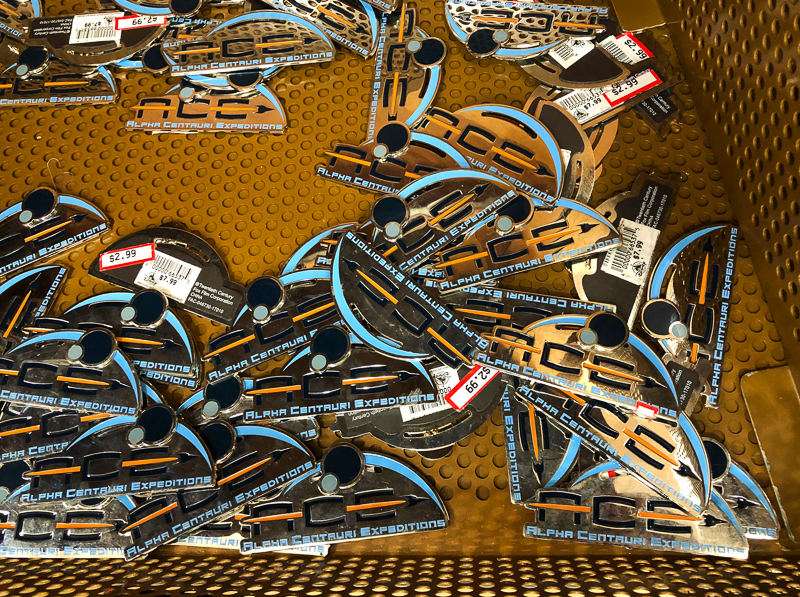 I actually do know what ACE is, but probably only because I’m a geek who is aware of Pandora’s layered backstory.

I wonder how many casual guests know what this is? Seems sort of odd to make a magnet with just ACE on it, totally divorced of context from the land itself. Oh well, that’s Avatar merchandise in a nutshell! 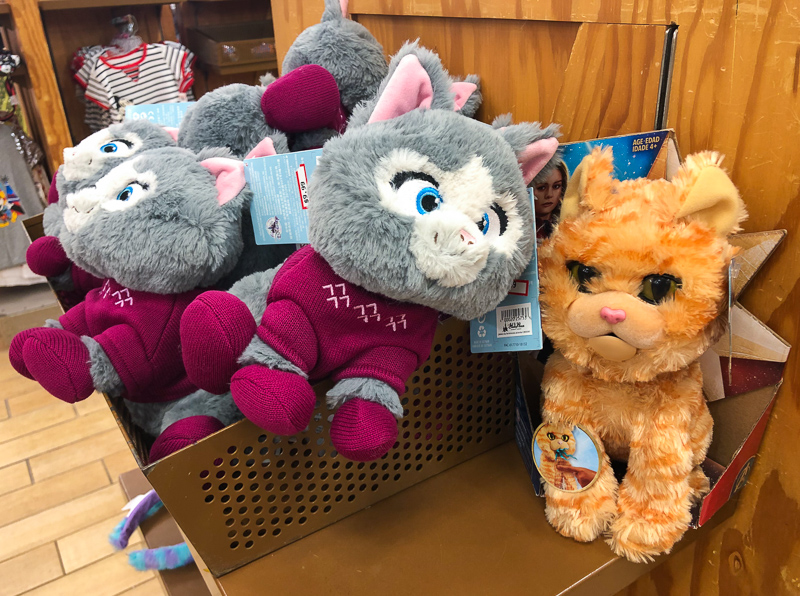 Above on the right we have the monster cat from Captain Marvel. On the left is…once again…I don’t know. I hope it’s a new cat from Frozen 2. It has that Frozen look to it.

On a related note, I saw a bunch of character merchandise from Frozen 2 the other day, and there’s also a new blue lizard and some sorta glowing ice unicorn or something. Both characters look promising–I’m actually really excited for Frozen 2. (With that said, it probably doesn’t make sense for stuff from a movie that isn’t even out yet to already be at the outlet. Anyone care to explain this cat?)

That wraps up this month’s Disney Character Warehouse Outlet Photo Report. Once again, in the spirit of honoring the locals, we’d encourage you to not visit the Orlando Premium Outlets. That’s only half in jest. If you’re tight on vacation time or would have to visit during the daytime hours, definitely skip it.

However, if you’re doing Disney Springs one night, could head to the outlet after 8 pm, and don’t mind picked over shelves, it’s worth checking out. Just temper your expectations. Don’t bank on finding any of the stuff you see pictured here or on social media. Character Warehouse is definitely a ‘feast or famine’ type of deal–the majority of the time we go, we don’t buy a single thing.

Have you gone to the Disney Character Warehouse Outlets since the flurry of rule changes and line outside the store? Do you blame Derek Burgan for the latest woes? If you’re a tourist, do you plan on honoring the locals by staying away? Find anything good, or did you think it was a frustrating waste of time? Any questions we can help you answer? Hearing feedback about your experiences is both interesting to us and helpful to other readers, so please share your thoughts below in the comments!