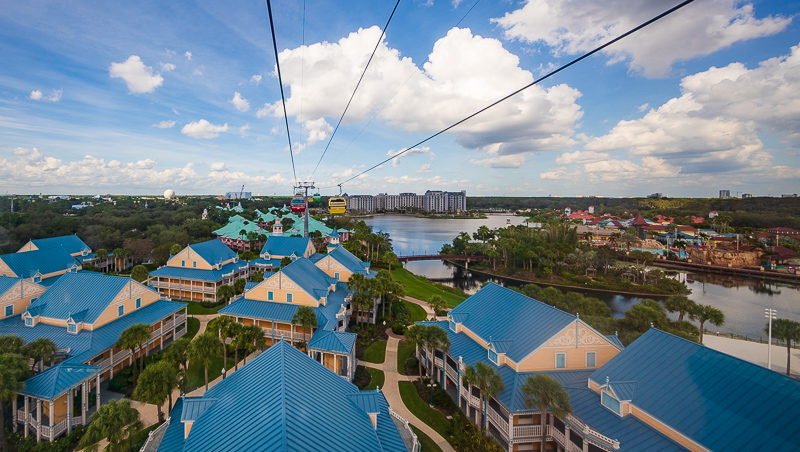 We’re back with another Skyliner gondola update from Walt Disney World! Here we have new photos, updated hours, and anecdotal observations from a slew of rides to test the system. We’ll also cover more of the fallout from the Skyliner collision that occurred a couple weeks ago.

To bring you up to speed, after 6 days of operations the Skyliner had a malfunction/accident that caused cabins to smash into one another at the Riviera Resort station, resulting in aerial evacuations after some guests had been stranded for three hours.

After another week of downtime and testing, Walt Disney World quietly resumed operations last Monday morning with modified hours. Following that, Disney released a statement offering “deepest apologies to the guests impacted by the malfunction that resulted in extended operating delays on Oct. 5.” and that “similar to ski lift systems, Disney Skyliner may slow or come to some stops during the ride.” Closures and delayed openings were also announced for last week, but that wasn’t the end of Disney’s Skyliner woes…

Following the completion of modifications to the system, it appeared to be smooth sailing for the Skyliner. Then, the 911 calls from the night of the (well just call it “unfortunate incident”) were released by the Orlando Sentinel following a public records request. The audio on these was…not great, Bob.

The most unnerving of these came from an 11-year-old Lakeland girl who was on the phone with 911 with nearly an hour, pleading for rescue assistance for her epileptic and anxious mother stuck in the Skyliner. (This was one of the cabins that subsequently received an aerial evacuation.) 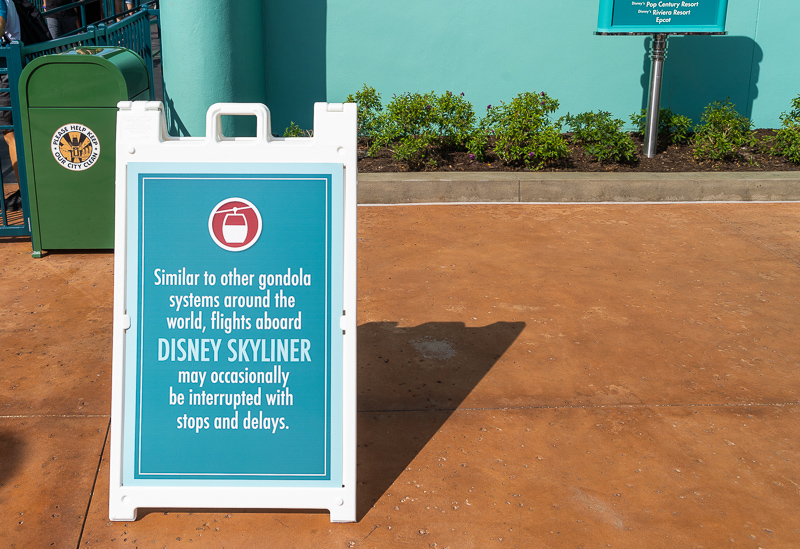 Other audios reveals stranded riders crying, pleading for help, and requesting assistance for family members with health conditions or who have passed out. These paint a picture of guests who generally are, in the words of one caller, “freaking out.” At least one Skyliner guest was hospitalized after the evacuation.

It would seem that one of the main issues for those stranded was with regard to communication. Several calls complained of only automated messages that they’d be moving shortly, even after the Skyliner had been stuck for two hours. Hopefully this was an area that was addressed via further Cast Member training, as it would seem that a lot of fears could’ve been assuaged with proper human communications. 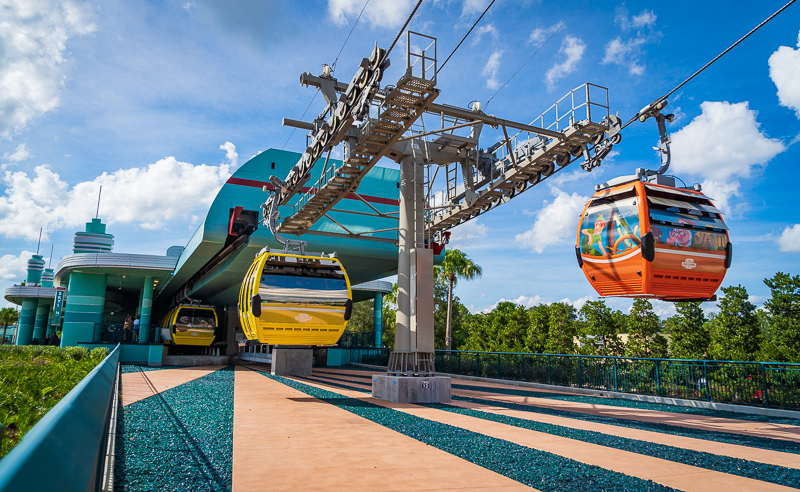 In any case, the Skyliner has now been operational for over another week, and we’ve had several chances to ride it since the unfortunate incident. (Always being sure to use the restroom before riding and filling our water bottles!)

As we’ve written before, we won’t hesitate to continue using the Skyliner. We still love it. Without exception, our experiences with it have still been flawless. 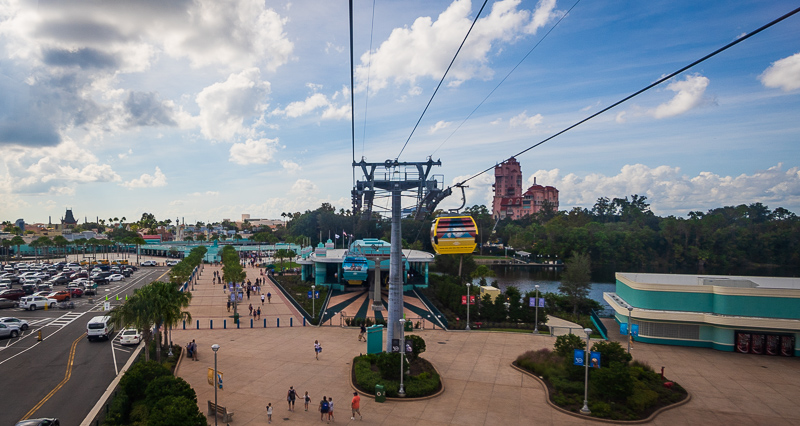 Of course, this is entirely anecdotal–we’re ridden the Skyliner less than than 1% of the total operating hours of the system since it resumed operations. Even if we logged dozens of hours on the Skyliner, that’d still be a comparatively small sample size.

And of course, one person’s anecdotal experiences of smooth sailing is meaningless to someone else who rides once and experiences a prolonged delay during the middle of a hot day. (Not that we’re saying this has happened of late–but it theoretically could.) 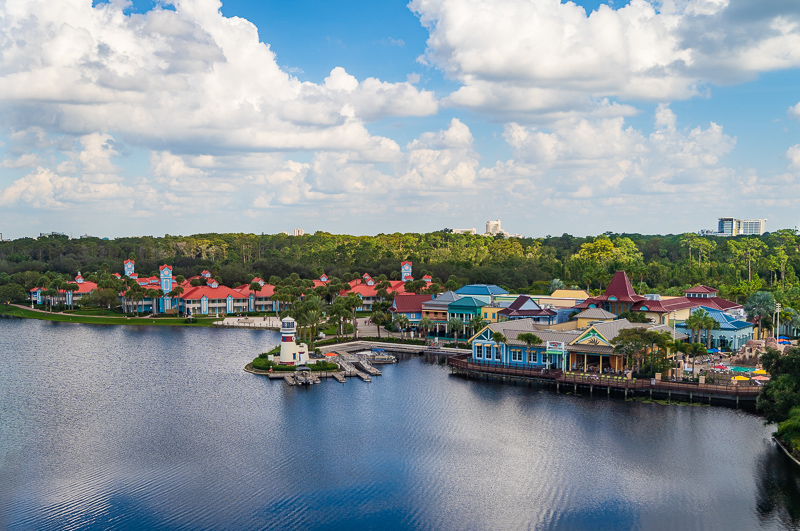 Our most common use case (actually…maybe our only use case?) for the Skyliner in the last week has been park hopping from Disney’s Hollywood Studios to Epcot via Caribbean Beach/Riviera Resorts.

Every single time, we’ve had a cabin all to ourselves (or all to myself, as the case may be) from DHS to Caribbean Beach, and then again from there to Epcot. Every single time, we’ve requested an uncovered cabin, and our request has been obliged. Aside from International Gateway post-fireworks, we’ve never even seen a wait time of more than 5 minutes. 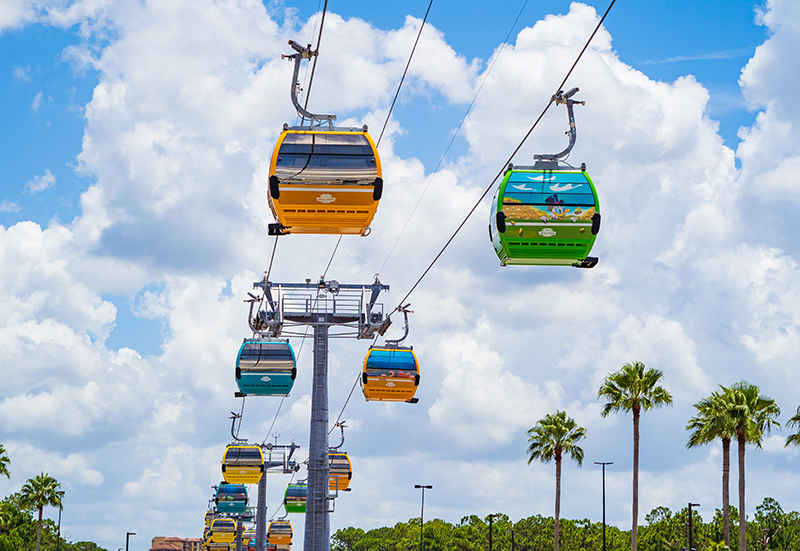 The short waits could be explained by trepidation about the Skyliner, but I think it’s more likely a result of the system’s high hourly capacity coupled with the time of day we’re using it. Aside from the weekends when ‘Sunday Skyliners’ come out to joyride, lines are a rarity at any time other than park closing.

Despite media coverage, it would seem many guests either don’t care or don’t know about the Skyliner’s issues. To that point, the most common question we’ve heard guests ask about the Skyliner is whether it goes to Magic Kingdom (no joke). 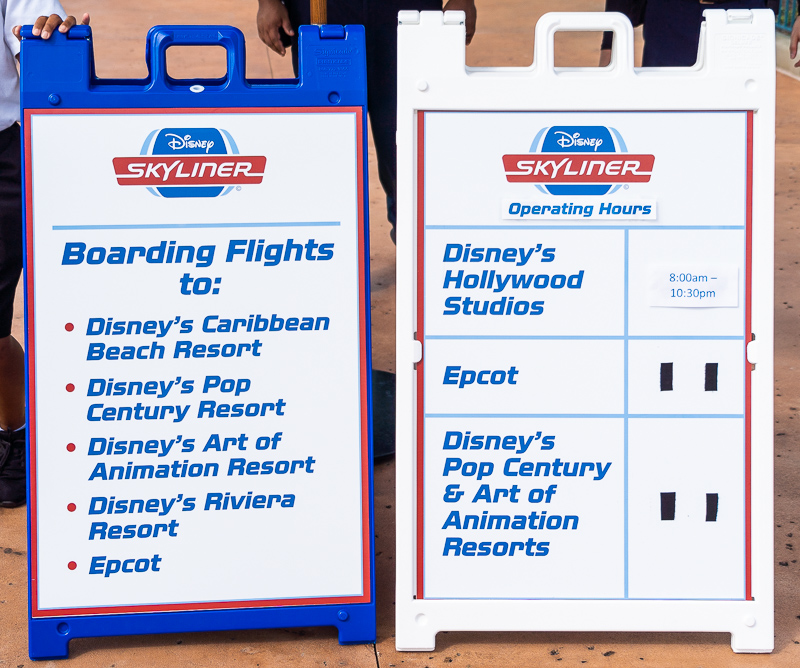 Disappointingly, the Skyliner is still operating with a delayed start time. You might recall that it originally started running at 5:45 am, which was insufficient for arriving to Disney’s Hollywood Studios at the start of Extra, Extra Magic Hours.

Nevertheless, the Skyliner was still pretty good if you wanted to glide in right after the first wave of guests was escorted by Stormtroopers to Star Wars: Galaxy’s Edge. (A congested experience we recommended avoiding, anyway.) 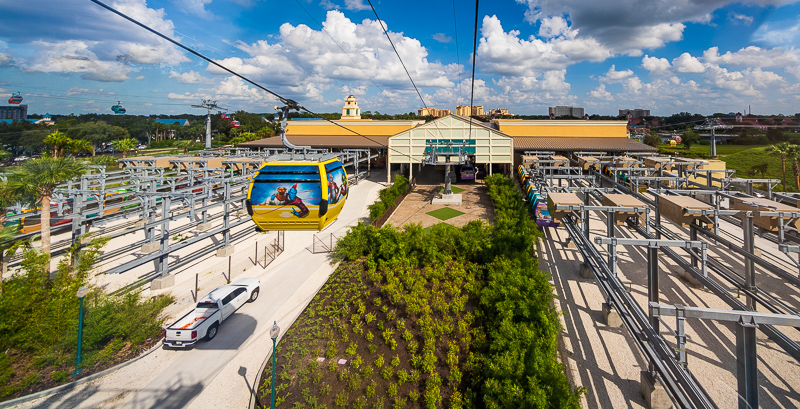 Now, the Skyliner opens at 8 am, which is fine for regular rope drop…but worthless for Extra, Extra Magic Hours. (Obviously, anyone staying at a Skyliner resort has access to ExEMH.)

Our assumption is that these hours are the ‘new normal’ and possibly a cut due to the low utilization rate for ExEMH. Speaking of which, ExEMH remains glorious despite higher midday crowds. 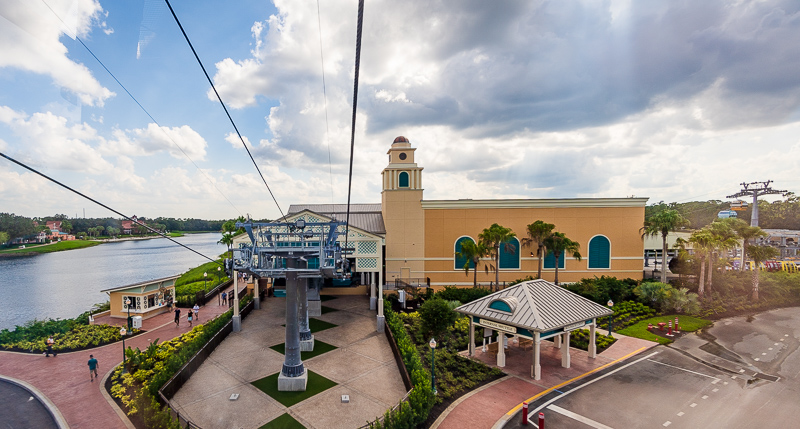 Those reduced operating hours are our biggest issue with the Skyliner at this point. Of course, that’ll be a non-issue in a couple of weeks once Walt Disney World runs out the clock on Extra, Extra Magic Hours.

My other biggest complaint, and this is probably nitpicking in the grand scheme of things, is that it seems like the windows of the cabins are never cleaned. It’s already challenging enough to battle reflections and glare, now I have to find the two square inches of window that kids haven’t licked. Doesn’t Walt Disney World know bloggers need the Skyliner for construction updates?!?!? 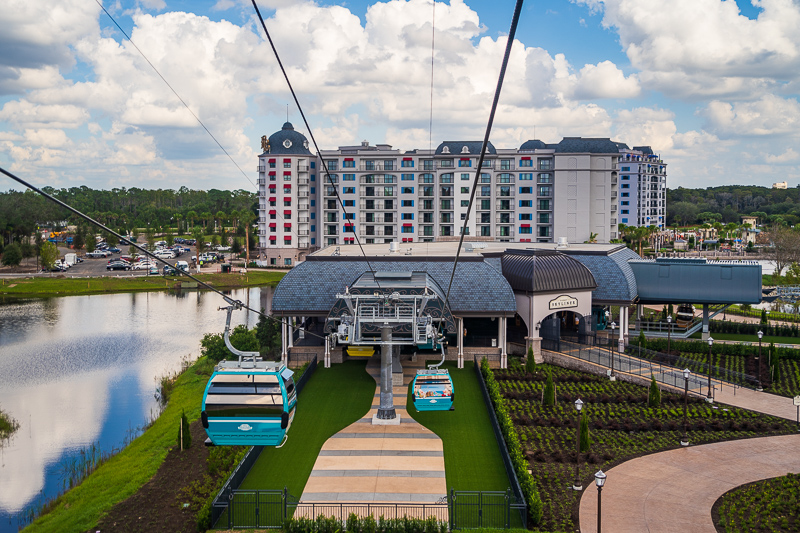 Speaking of which, the Skyliner offers some great views of progress on Disney’s Riviera Resort. Landscaping is coming along nicely and is inching closer to completion, well ahead of the resort’s mid-December 2019 debut.

In case you have skipped over our Disney’s Riviera Resort construction updates, I’m not particularly keen on the level of ambition of this resort’s design or intricacy. However, I realize my views are hardly representative of the general public, and I’ll be curious to see how this is received. Will luxury prevail over theme? 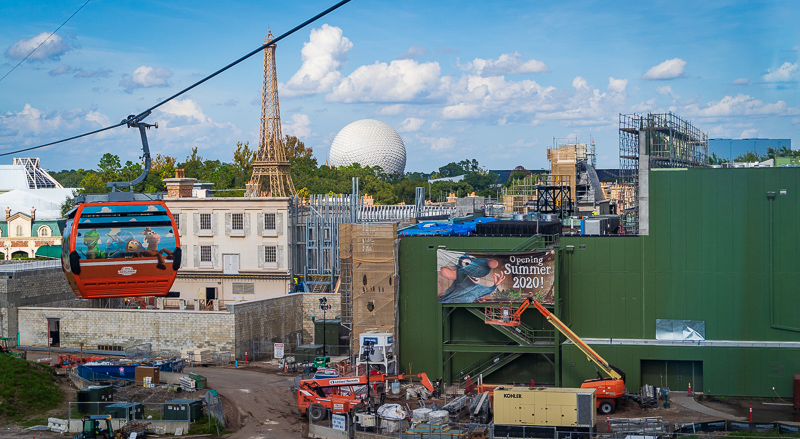 The Skyliner also offers backstage views of World Showcase at Epcot. Most notably, of progress on the France expansion and Remy’s Ratatouille Adventure. (We’ll have more photos of the construction progress here in our next Epcot update.)

What I really find interesting here is that World Showcase has some surprising attention to detail on the backside of its buildings. Areas that, until the Skyliner, you’d never see from within the park or literally anywhere on Walt Disney World property except the Swan & Dolphin. 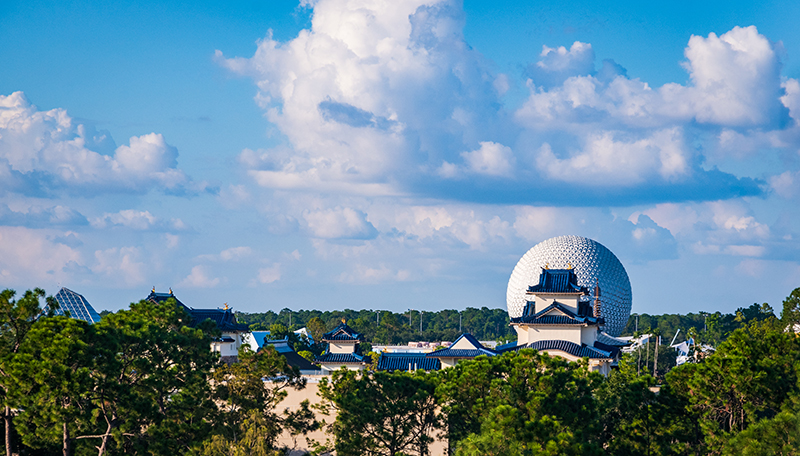 Keep in mind that the Swan & Dolphin did not exist when any of this was built, which really underscores how Imagineering went the extra mile when designing World Showcase. (There’s an entire section of castle wall in Japan that you’d never see but for the Skyliner!)

Ironically enough, the one glaring exception to this is the green Remy’s Ratatouille Adventure show building. This is also the only thing built back there since the Skyliner was announced. I have no issue with this building as it’s not an issue from within the park, but the contrast is amusing.

Anyway, that wraps up this Skyliner update. We’re hopeful and optimistic that the new aerial transit system has overcome its shaky start, and things will be smooth sailing from here. Despite us really wanting the Skyliner to succeed and become a beloved form of transportation among Walt Disney World guests, we’ll continue to report the reality, good and bad. If things continue to run smoothly, we’ll turn our attention to some fun ways to leverage the Skyliner in the next few weeks. So stay tuned for that!

What do you think of the Skyliner reopening? Are you satisfied with how Walt Disney World has handled this situation and communicated the nature of the closure with guests? Disappointed by the shorter operating hours? Will you ride the Skyliner going forward? Do you agree or disagree with our assessment of the Skyliner? Any questions we can help you answer? Hearing your feedback–even when you disagree with us–is both interesting to us and helpful to other readers, so please share your thoughts below in the comments!