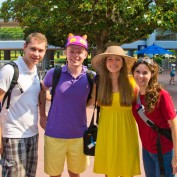 I neglected to introduce our team previously, mostly because I didn’t want to reveal the photo of my brilliant Figment costume prematurely. Our team consisted of myself and Sarah, plus our friend Nick, and JL Knopp of http://TheDisneyDrivenLife.com. As we stood in line earlier that morning at Epcot, we were struggling for a team name.
Read More...
Wishes! A Magical Gathering of Disney Dreams is an excellent fireworks show that is a must-see if you’re in the Magic Kingdom at night. Although we far prefer Disneyland’s fireworks show, Remember… Dreams Come True, Wishes! is still great. To purchase a print or digital download of this photo, or many other photos featured here
Read More...
Frontierland at both Walt Disney World and Disneyland really captures the spirit of the uncharted American frontier quite well–despite being in the middle of two the most bustling theme parks in the world. At Walt Disney World, even the character meet and greets are themed, with Donald Duck doing his best Davy Crockett impression. To
Read More...
As children, the Dumbo the Flying Elephant attraction at Disneyland and the Magic Kingdom in Walt Disney World is one of those attractions we must do. We soar high, flying with Dumbo as he flaps his ears in the breeze. As we grow older, the illusion and the magic wears off. With a little photographic
Read More... 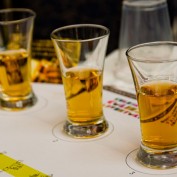 With the 2013 Epcot Food & Wine Festival country booths soon to be announced, as well as celebrity presentations, Eat to the Beat concert performers, special events, and seminars, a lot of you are probably wondering if Epcot’s International Food & Wine Festival is worth your time. Let me answer that question for you, with
Read More...
From the moment the lights go down, the excitement from the crowd for the Main Street Electrical parade grows. It reaches a fever pitch when you begin to hear the strangely addictive sounds of the Baroque Hoedown become audible and Mickey Mouse on the parade’s title float becomes visible. To purchase a print or digital
Read More...
Nothing quite compares to Tomorrowland at night in the Magic Kingdom. The place comes alive with a kinetic energy not felt during the day. The Background Music seems to deeper and more palpable, the neon glows vibrantly, and the Tomorrowland Transit Authority Peoplemover quietly glides by overhead. No other land in the Magic Kingdom has
Read More...
I imagine, the time period of this statue being right around the time of Walt’s death. In this interpretation of the statue, I imagine Walt saying, “Mickey, go forth and lead our Kingdom.” Mickey undoubtedly personifies the spirit of Walt Disney, and through him, the Disney Kingdom has prospered and grown far beyond Walt’s wildest
Read More...
At Space Mountain, a rocket-ship blasts off after the recent refurbishment to the attraction that brought in a new queue, some new effects, and an impressive new post-show. While the refurb didn’t bring exceptional on-ride audio, on-ride audio was added a few months later.
Read More...
Note: these reviews have not been updated since 2011. They are no longer current and this page should only be used for basic reference. Check out our “Best Underwater Cameras for 2013” for current underwater camera recommendations to use at Typhoon Lagoon and Blizzard Beach. How could we get good photos at Typhoon Lagoon or
Read More... 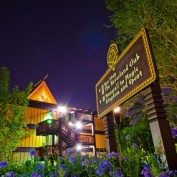 Now is the scene in the trip report, were this a movie, where the pages would start to fall off the calendar, and the seasons would change in a series of frames dissolved through the frame. You wouldn’t have many calendar pages fall or much of a season change, though, as we were home for
Read More...