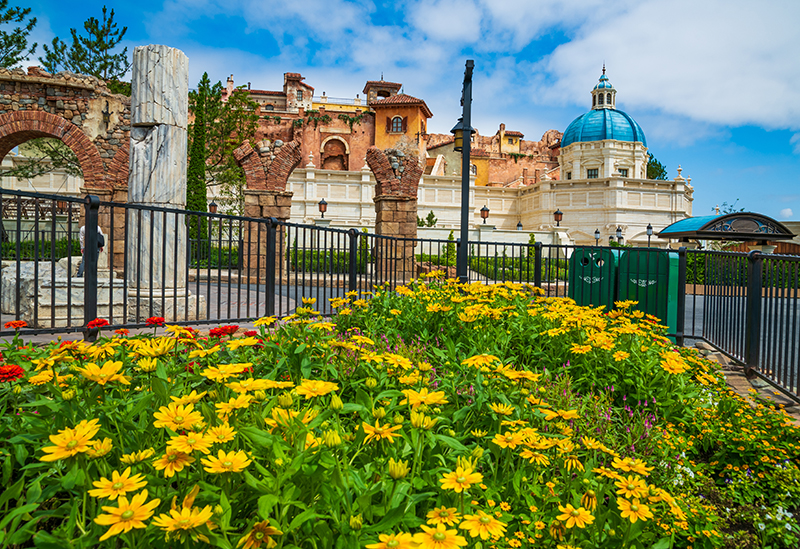 Oriental Land Company announced that Disney Premier Access line-skipping will be sold on the official Tokyo Disney Resort App beginning on May 19, 2022. This post details the Tokyo Disneyland and DisneySea attractions that’ll sell paid FastPass, plus our commentary on how this differs from its counterparts at Walt Disney World and Disneyland, and what to expect going forward.

Let’s start with the announcement from OLC. Disney Premier Access is a new digital service that provides guests with the convenience of reserving certain theme park attractions by using the app while at Tokyo Disneyland and Tokyo DisneySea. By using this new service, guests will have more flexibility, be able to customize their visit, and get the most out of their day.

With Disney Premier Access at Tokyo Disneyland and Tokyo DisneySea, guests will have the ability to select their preferred time and make reservations to experience attractions. This service, available for a fee, will provide options for how guests experience TDL and TDS, offering convenience and added flexibility for those who want to personalize their experience and get the most out of their visit.

Two attractions will offer Premier Access: The Enchanted Tale of Beauty and the Beast at Tokyo Disneyland and Soaring: Fantastic Flight at Tokyo DisneySea. Each will cost 2,000 yen, or approximately $15.50 per person per attraction.

For the two attractions eligible for Disney Premier Access, Standby Pass is suspended starting April 25, 2022. However, guests can still experience these attractions as usual by waiting in line. Tokyo Disneyland and DisneySea will continue to operate with the goal of creating a seamless guest experience by reducing the daily capacity to a number lower than before, and by introducing innovative services that will empower guests to enjoy the parks their way. 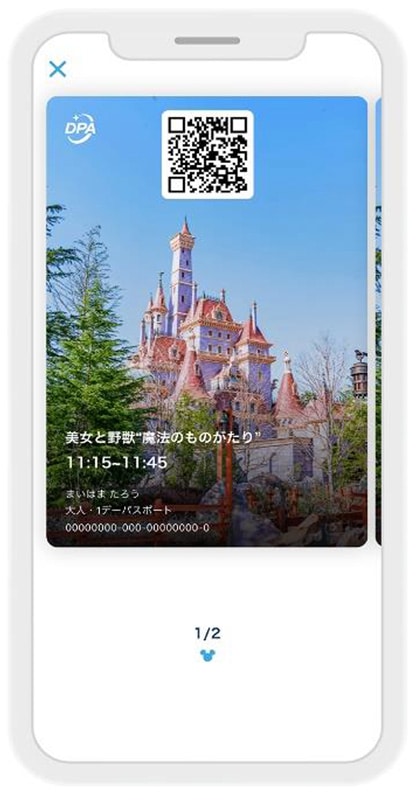 This shouldn’t come as a huge surprise. Oriental Land Company has hinted at paid FastPass in multiple earnings reports dating back to 2020. Most recently, in its 2024 Medium-Term Plan, OLC repeatedly emphasized the importance of “working on initiatives to enhance Guests’ experience value” while recovering financially and finding new ways to monetize the guest experience.

The 2024 Medium-Term Plan is worth skimming, if only because it has a high level of transparency that Disney itself seldom offers. Rather than being written in flowery marketing language or arcane financial terms, it’s relatively straightforward. The goals are healthy and balanced, wanting a better guest experience and improved performance for the company. Goals that, if that report is any indication, don’t necessarily have to be in conflict. 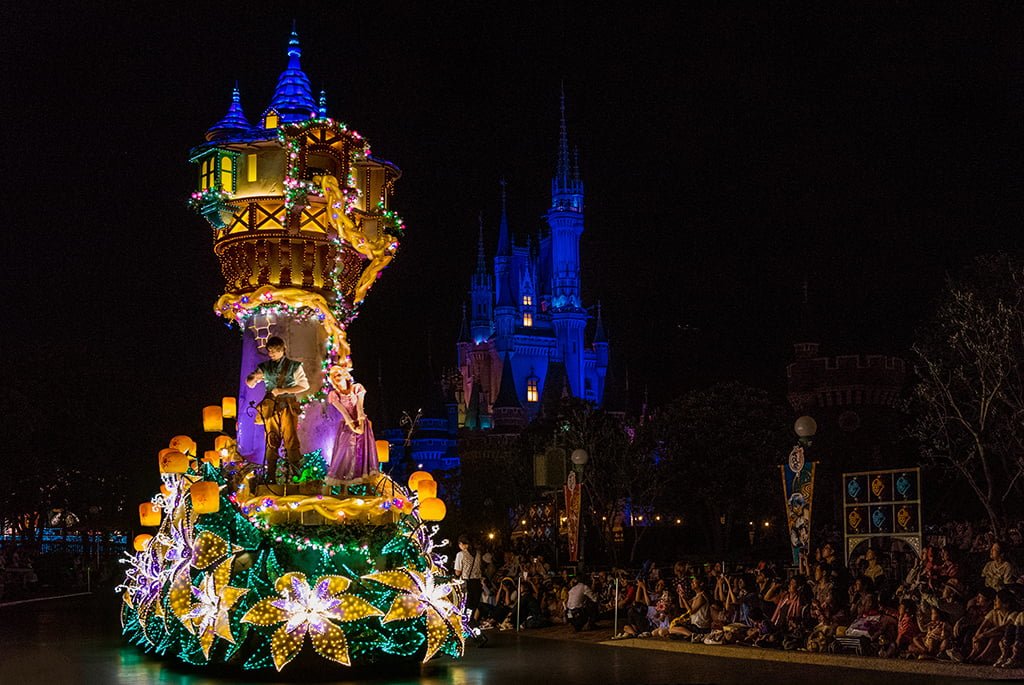 To that end, it’s also worth underscoring the backdrop against which this occurs. For the last two-plus years, Tokyo Disney Resort has operated with capacity caps in place, with attendance limited as low as 5,000 guests per day until last fall.

That number has gradually increased this year, but only within the last few weeks have physical distancing markers been removed from the parks. Temperature checks, mask rules, and other health safety policies dropped over a year ago in the domestic parks all still remain in place at Tokyo Disney Resort. This is mentioned more for their financial impact on the parks than the policies themselves.

Despite this, the Japan parks brought back their daytime and nighttime parades faster than Walt Disney World or Disneyland. Those parks have also resumed most, albeit not all, entertainment.

More significantly, Tokyo Disneyland opened its large scale expansion of Toontown, Tomorrowland, and Fantasyland–highlighted by an area themed to Beauty and the Beast. This occurred in Fall 2020 during the phased reopening when attendance was at or near its lowest point.

Additionally, construction has continued full steam ahead on Fantasy Springs, the ambitious Peter Pan, Tangled, and Frozen expansion to Tokyo DisneySea. Work stalled for only a few weeks back in Spring 2020 before OLC got right back to business, and they’re now moving fast. In total, these projects are costing OLC approximately $3 billion, with the newly-announced Space Mountain adding another ~$400 million to that total. 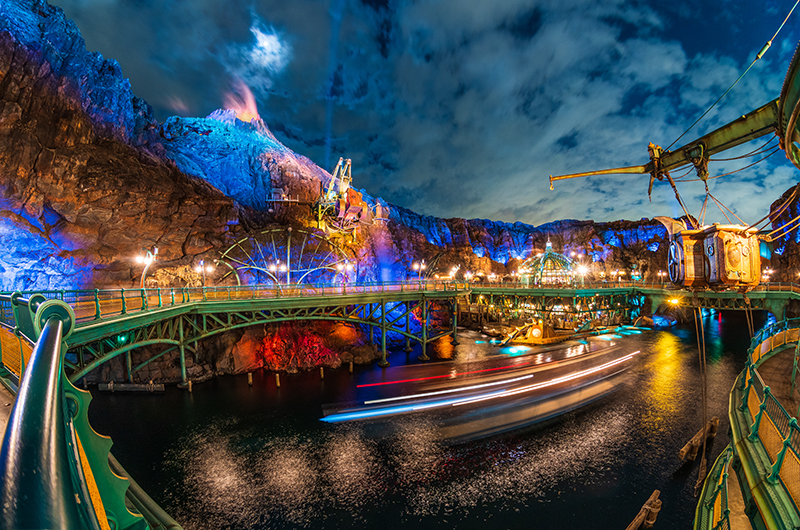 All of this is despite Tokyo Disneyland and Tokyo DisneySea continuing to hemorrhage money, with no alternative sources of revenue to recover the losses. Not to make excuses as to why it’s different for OLC to start selling FastPass as compared to the domestic parks…but frankly, it is a bit different.

If this makes us biased and lacking objectivity towards OLC, so be it. Between their increased corporate transparency and our unequivocally positive firsthand experiences at Tokyo Disney Resort over the last decade, we are willing to give that company the benefit of the doubt. They’ve earned it. 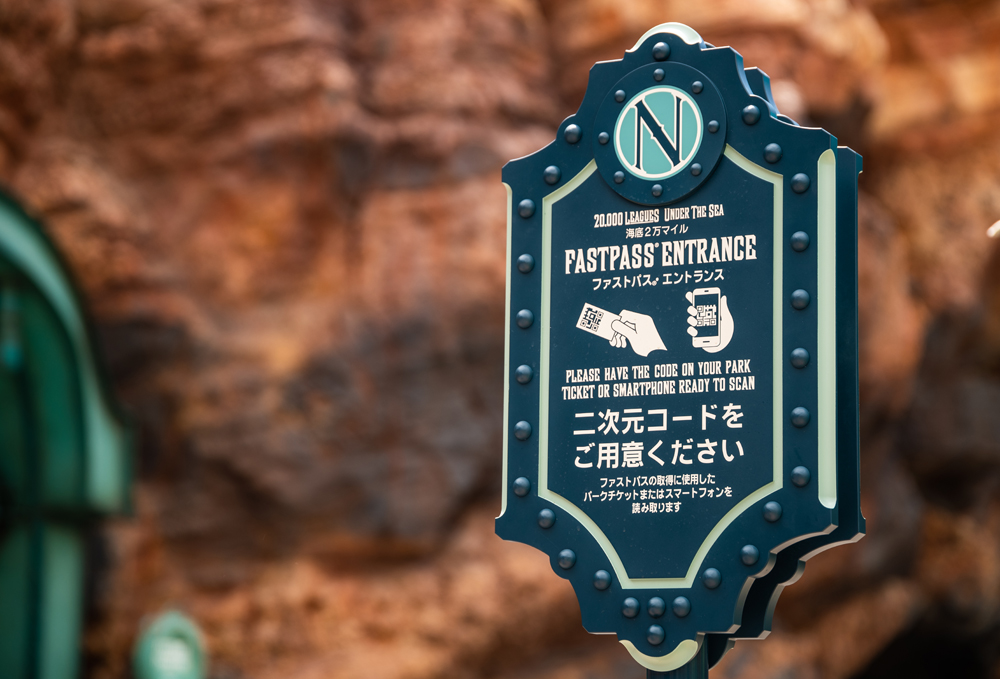 The big question for us is what happens next? This seems more like a trial balloon for Disney Premier Access than its final form; the assumption among many Tokyo Disney Resort fans has been that free FastPass will never return and will be replaced by a fully paid system.

That assumption seems logical given what has happened at Disneyland Paris, Walt Disney World, and Disneyland in the last year. However, Tokyo Disney Resort is its own beast, and has unique guest demographics. 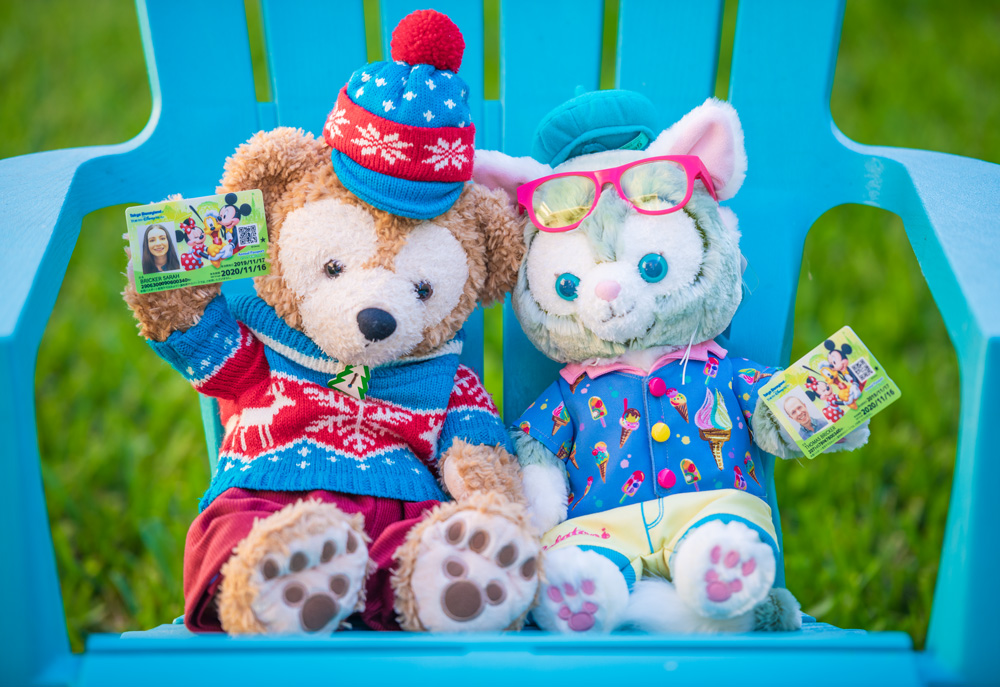 For one thing, the Japan parks have the most fervent fanbase, exceeding even Disneyland when it comes to hardcore locals. Whether those diehards would pay for something equivalent to Genie+ is a good question, and it’s possible OLC is not confident in that.

It’s also possible that OLC does not want to get overly aggressive in rolling out new monetization plans at a time when travel is only beginning to recover for fear of alienating average Japanese consumers. The dynamics are not quite the same in Japan as the United States, where pent-up demand is fueling increases in per guest spending of 40%. 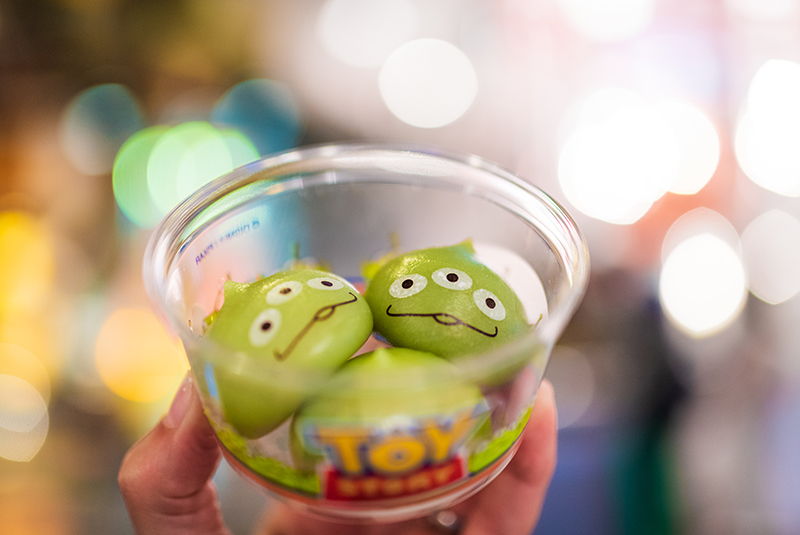 As a general matter, Japanese consumers have a reputation for being extremely frugal and cost-conscious. (Here’s a fascinating video from the Wall Street Journal: ‘Japanification’: As U.S. Inflation Surges, Here’s Why Japan’s Prices Have Held Steady)

While inflation remains low by international standards, it is starting to impact prices in Japan. The key difference is that Japanese consumers are famously sensitive to rising prices, a consequence of the “Lost Decades” of economic stagnation following the collapse of an asset price bubble in the early 1990s. Many companies in Japan are thus reluctant to raise prices, even if their hand is forced by higher input costs, for fear of losing customers.

That reticence could be why OLC is only charging for the newest attraction in each park. Or, it could be that the app functionality is still being developed, and Tokyo Disney Resort doesn’t want to rush to market a sloppy product with glitches and poor user experience. Only time will tell. 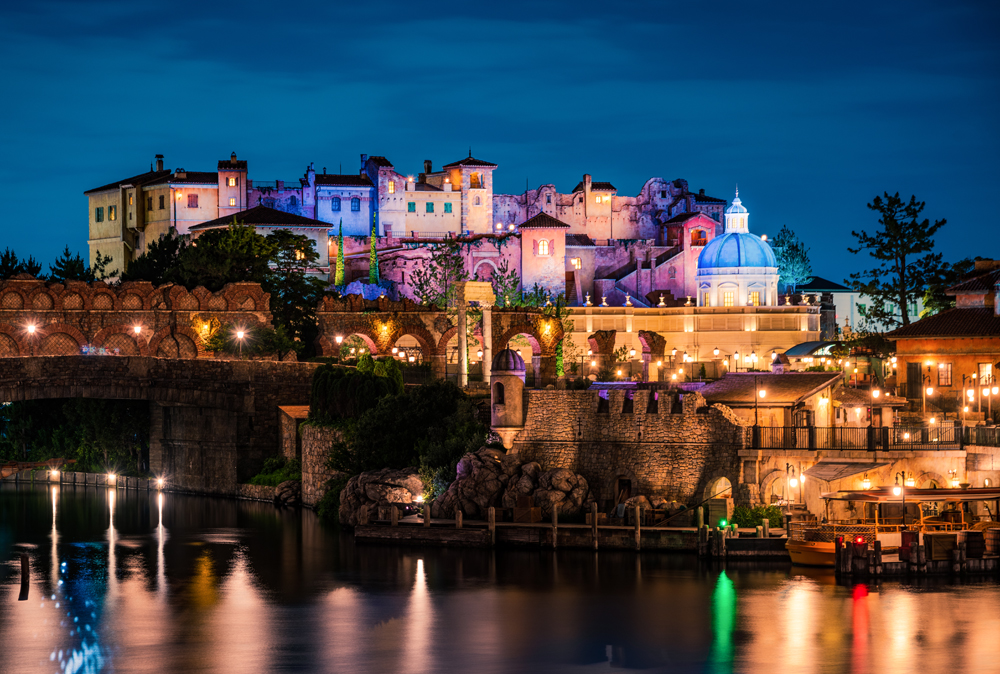 Ultimately, it’ll be interesting to see what happens with Disney Premier Access and whether it receives a Genie+ like component at Tokyo Disney Resort. While I obviously do not want to pay more for anything, average tickets cost ~$70 per day there, food & beverage is less expensive, and merchandise is generally cheaper (minus Duffy, who seemingly subsidizes the whole operation).

If paid FastPass costs an extra ~$15 per day to use a line-skipping service, that’s something we’ll pay (albeit not for individual attractions). The overall cost is still low enough for visiting the superior Tokyo Disneyland and DisneySea, and I trust that OLC would not release a fundamentally-flawed or frustrating service. That’s just us, though!

What do you think of OLC’s plan to charge ~$16 per ride on the Enchanted Tale of Beauty and the Beast at Tokyo Disneyland and Soaring: Fantastic Flight at Tokyo DisneySea? Expect this to be expanded in a manner similar to Genie+ or think this is it for the monetization plan? Do you agree or disagree with our assessment? Any questions? Hearing your feedback—even when you disagree with us—is both interesting to us and helpful to other readers, so please share your thoughts below in the comments!