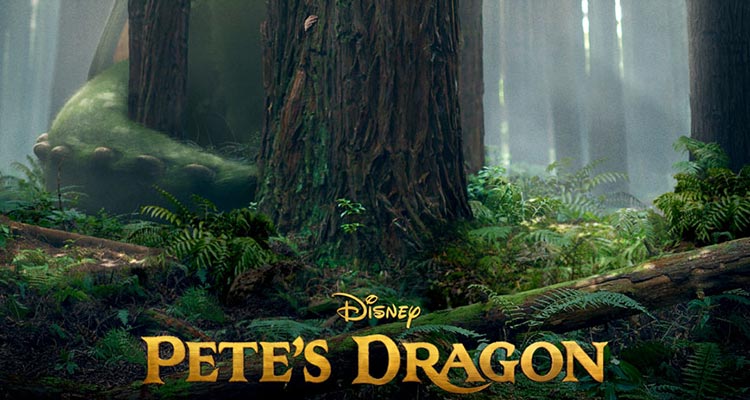 Pete’s Dragon is a live action remake of the 1977 Walt Disney animated musical about a boy and his dragon best friend that is now available on the Disney+ streaming service. In this review, we’ll cover whether the movie is worth watching.

Directed by David Lowery, the new live action version of the film is a reimagining of Disney’s family film by the same name, and chronicles the adventure of an orphaned boy named Pete and his best friend Elliott the dragon. Pete’s Dragon stars Bryce Dallas Howard, Robert Redford, Oakes Fegley, and Oona Laurence.

The premise is that Mr. Meacham delights local children with stories of a mysterious dragon that lives deep in the woods of the Pacific Northwest. His daughter Grace believes this is just talk until she meets 10-year-old orphan Pete, who claims to live in the woods with a giant, friendly dragon. With help from a young girl named Natalie, Grace sets out to investigate if this fantastic claim can be true…

No studio would touch the idea of an animated “reboot” of Citizen Kane. It’s a laughably bad idea for a number of reasons, the primary being the legacy of the source material. You’ve probably already dismissed the idea out of hand, as a stupid joke that typifies this blog’s poor attempts at humor. However, this is essentially what Disney has been doing of late with its live action remakes: taking their animated classics and redoing them in live action.

While this has caught the ire of some Disney fans, the general public has generally been okay with. The live action reboots (or retellings, or whatever) have done well at the box office. I’m not quite sure why people have been so accepting, considering they are remaking films that are unequivocal classics. My guess is it’s partly a mix of people dismissively viewing animation as cartoons, coupled with reboots/remakes becoming the “new normal” for Hollywood. Whatever the reason, I personally view remaking Cinderella no differently than remaking Citizen Kane.

Some dude once said “you can’t top pigs with pigs” (and no, he was not advocating against swine stacking competitions). That sorta seems like sage wisdom here. What’s the point in remaking such an exquisitely-done piece of art? Perhaps things could be done differently, but the remake is always going to be inferior, so why bother? It would be like redoing the Mona Lisa because you think you have a bold new vision for her nose. So what? Who cares?

That’s more or less how I’ve felt about Disney’s live action remakes. I’ve seen them all and while all have been passable, competently-made flicks, none struck me as all that memorable, or bringing anything new to the table sufficient to justify their existence. (The Jungle Book is arguably the other exception to this because Christopher Walken, among other things.)

At the end of each, I wished I would’ve just watched the animated classic. I understand Disney’s motive in remaking its best animated films from a commercial perspective. From an artistic perspective–perhaps how a creative company should be considering things–they have seemed like misguided decisions.

If anything, Disney should be remaking its worst films. The ones that had a kernel of a good idea, but just didn’t work for whatever reason. 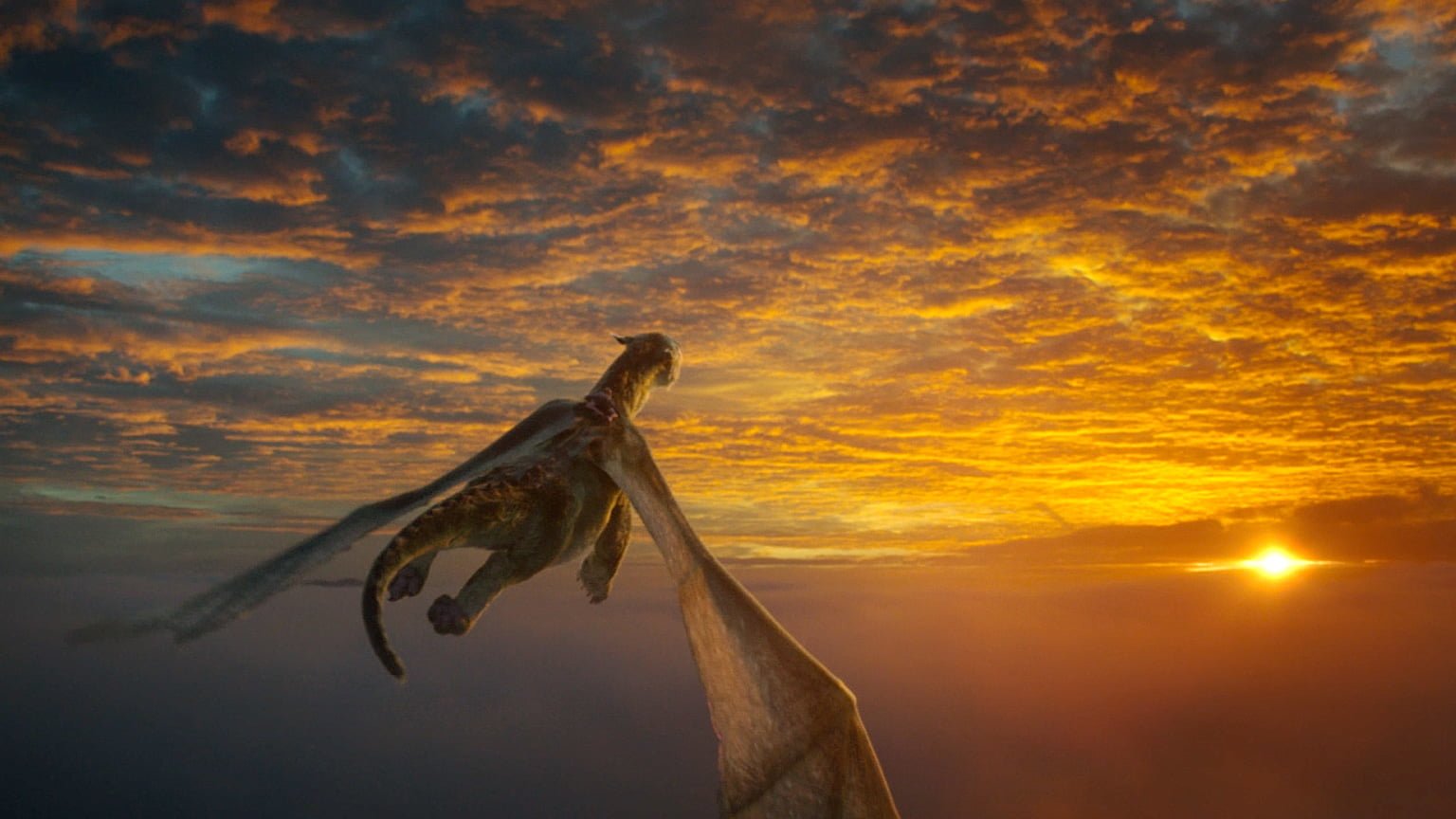 Enter Pete’s Dragon. The original contained a sound premise, but the finished product was an awful mess. When I wrote similarly harsh words in our Pete’s Dragon Blu-ray Review, people on Facebook articulated reasoned and respectful responses espousing the bases for their disagreement, as is the customarily high level of discourse on Facebook. (Hahahahahahahahahahah…aaaaahahahaha. But seriously, I think I was only called an idiot a few times.) Sorry, Pete’s Dragon fans, but I think even the most fervent of you would have to concede that a big part of your enjoyment is rooted in nostalgia.

Fortunately, the remake does not suck! In fact, aside from the name of the film and the boy and dragon thing, this film is more a mix of E.T., King Kong, and My Neighbor Totoro than it is the original Pete’s Dragon. Out of those, I found the most parallels between it and the final film on that list, a film similarly dealing with themes of coping, survival, and–most importantly–childlike senses of awe & wonder. 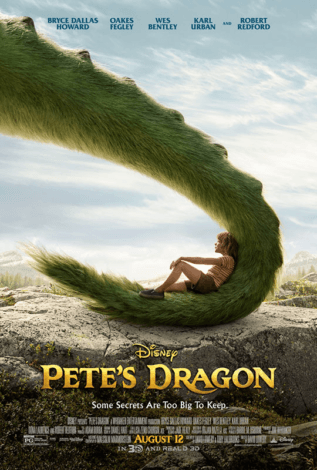 Throughout Pete’s Dragon, I felt this sense of awe. As Pete interacted and flew with Elliot in breathtakingly fantastic scenes, I couldn’t help but smile. When other characters encountered him for the first time, I approached the scene vicariously through their eyes. There are sweeping fantasy scenes in Pete’s Dragon that are beautiful, fun, and left me feeling like a kid. I felt invested in the well-being of the titular characters, and their respective journeys were incredibly satisfying as both characters were well developed and portrayed.

Speaking of Elliot’s portrayal, the film’s existence can also be justified by the amazing CGI that is utilized to bring Elliot to life. And bring him to life, did it ever. This is not just some special effect: he is the best character in the film, with detailed mannerisms and a range of emotions conveyed in such a sense that you really empathize with him. If anything, the animated Elliot in the original was more of a gimmick than the CGI in this one (albeit a necessary gimmick since technology did not allow for anything better at the time). Here, modern CGI allows for a fully-realized Elliot in a way that exemplifies how CGI should be used.

This is not to say the film is not without flaws. I didn’t think the vindication of Robert Redford’s character felt earned, among other minor quibbles. Of my complaints, the biggest is that a logger named Gavin is the antagonist, and it’s unclear whether he’s a “bad guy” or sorta just a MacGuffin to reach the film’s climax. He and his motives struck me as pretty flimsy, and I would’ve preferred if this whole element of the plot were abandoned.

It’s almost as if he exists solely because this type of film “must” have conflict. Personally, I think it would’ve been better off without, and instead focused on the wide-eyed fantasy of the relationship between Pete and Elliot, and how that must evolve (there’s the ‘friction’ if the story needs it). Of course, perhaps this is just personal preference, and my preference would’ve lacked a conventional arc, possibly leaving audiences wanting more.

Regardless, Disney has made a beautiful film here that allows adults to revisit their youth and let their imaginations run wild. Kids will love it because what kid doesn’t love dragons?! Adults will love it because it makes them feel like kids again. That is the essence of Pete’s Dragon, and although it’s a deceptively simple film, it’s deceptively powerful. This was a good choice for the remake treatment, and I hope other stories with unrealized potential (The Black Cauldron, anyone?) are chosen in the future, rather than continuing to go to the “cash grab” well.

Pete’s Dragon is now available on Disney+ for streaming. Check out our Best Movies & Shows to Watch on Disney+ for our top recommendations. For more info about Disney Plus, read our Is Disney+ Worth It? Review, Library Info, Pros & Cons which is our ultimate guide to the service, covering everything you need to know if you’re thinking of subscribing!

If you’ve seen Pete’s Dragon (this version or the original…or both), what did you think of it/them? Are you planning on seeing this film? Do you agree or disagree with our review? Any questions we can help you answer? Hearing your feedback–even when you disagree with us–is both interesting to us and helpful to other readers, so please share your thoughts below in the comments!

22 Responses to “Pete’s Dragon Review: Finally, A Remake Worth Making”