If you haven’t heard by now, Disney announced that it would be updating Pirates of the Caribbean at Walt Disney World and Disneyland to remove the ‘Redhead Wench Auction Scene’ and replace it with a new auction scene. This was easily the most controversial Disney news since…eh…about 48 hours before. (Last updated February 26, 2018.)

I don’t have anything to add in terms of news beyond what the Disney Parks Blog shared. So, if that’s all you want, go there. Instead, I wanted to offer some commentary on this. I feel this news has not necessarily been a conversation so much as a shouting match guided by underlying political(ish) views.

Update: Pirates of the Caribbean has now returned from refurbishment, and the new scene has debuted. It pretty much is identical to the concept art, and while there are a couple of cheesy lines of dialogue in the new scene, or analysis of the new Auction scene is pretty much the same as it was when we saw the initial concept art…

I know I’m essentially putting my entire head into the hornet’s nest here, but I think this is an interesting topic that pertains to the intersection of art, history, evolving cultural norms, and more. I also believe it’s a conversation capable of being had without ad hominem attacks…

I think the first, and strongest, argument in favor of maintaining Pirates of the Caribbean is artistic integrity. We’ve discussed theme parks as art on the blog before; the unfortunate reality is that most people do not view theme parks, or the attractions therein, as art. I don’t think it’s a snobbish thing, but rather that (like video games) most people have never really given theme parks that type of consideration.

When viewed as art, there are some practical realities that must be considered and concessions that must be made given their functional purpose. Refreshing Carousel of Progress’ final act is not like painting a mustache on the Mona Lisa. Likewise, you cannot expect Future World to be forever unchanged–the very theme dictates otherwise. Extreme examples, to be sure, but the point stands. There’s more fluidity to theme parks than other art; things must be updated. 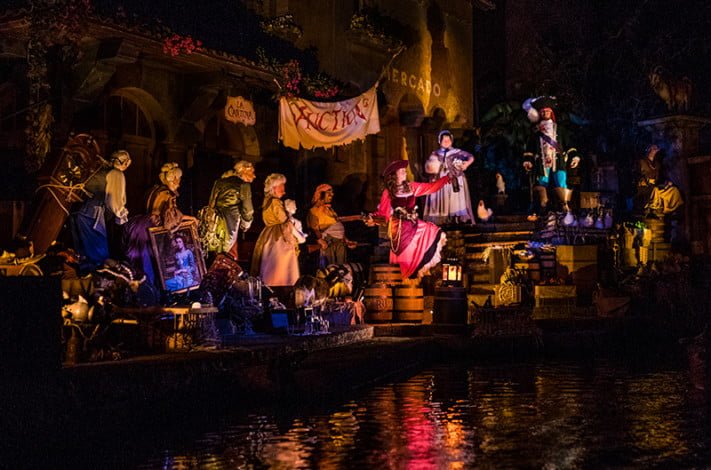 However, there must be a line. Arguably, you approach that line when the conversation involves updating classic attractions–the masterpieces. If the change is change for its own sake or so a new generation of Imagineers can leave their mark–neither of which would actually improve on the attraction–it should not be made. (While I do not think this is change for its own sake, the replacement auction scene does not make a ton of sense in the context of the ride–but that’s another topic for another post.)

The question is: where do updates that fit with evolving cultural norms and values fit into that? Do we reject such changes, acknowledging that the attraction was a product of a different era, when certain gags and jokes would’ve been okay that are cringeworthy today, and appreciate it as art of its generation? Or, do we view Pirates of the Caribbean through a contemporary lens, and expect its content to comport with today’s values?

I’m not sure there’s an easy answer to that, and it certainly doesn’t help that there is not really a body of art theory (or even an ongoing discussion about parks as art) to provide guidance. Usually, art must be confronted on the terms of its day, as it does not change over time. The best example of art being changed decades later that we really have is the revisionism of the E.T. walkie talkies controversy, but that’s different…or is it?

I also think there’s something to be said for being willing to preserve and confront history, even that which makes us uncomfortable. Revisionist history is a problem, and if we don’t face our mistakes, we’re bound to repeat them. There are two components to this: pirate history and American history.

In the case of American history, the case can be made that Pirates of the Caribbean is not just significant as a Disneyland classic and one of the last attractions that Walt Disney himself had personal involvement. You can make a case that, whatever its shortcomings, Pirates of the Caribbean is a ‘time capsule’ of pop culture and views towards entertainment in the 1960s. For this perspective, you have to ignore the 1990s and Johnny Depp changes, but it’s still an arguably-valid point.

With regard to pirate history, I’m not sure a compelling argument can be made that this is a historically accurate take on pirate history to begin with. Is altering the scenes of something that never purported to reflect actual history really revisionist? Moreover, are we actually confronting the bad acts of pirates in the attraction, or are we celebrating them? This leads me into the next point…

The ‘confronting’ side of presenting the dastardly deeds of pirates in Pirates of the Caribbean is that the attraction is acceptable because it is a cautionary tale. This is most clear in the Disneyland version, but even in the other attractions there are signals (“dead men tell no tales”) in the dialogue, visual imagery, and narrative framing.

Despite these, I’d contend that Pirates of the Caribbean does not proceed as an archetypal morality play. The characters who embody specific vices or bad deeds are not confronted with justice. They neither face nor make any difficult decisions, they do not atone for their sins, and they are not directly punished for choosing the wrong path.

Likewise, the audience is not challenged by the negative attributes of the pirates. They are presented at face value, and that’s pretty much that. Due to the narrative structure of Pirates of the Caribbean, each misdeed is presented as a fleeting vignette, not to be revisited. It does not seem to me as if these scenes are asking the guest for contemplation or to make any sort of value judgment.

Pirates of the Caribbean does not have the touchstones of a morality tale, unless you are willing to infer a lot from its narrative framework. While I mentioned above that an argument could be made that it’s a cautionary tale, I think that’s probably only to the extent of the greed of the pirates. Greed is a concept that can be read broadly, but I think it’s a pretty big stretch to say, “these pirates died for their greedy act of selling women.”

This is not to say that Pirates of the Caribbean glamorizes piracy. The foreshadowing and general tone of the narrative frameworks suggests pirate life was grim. I don’t see the attraction as a celebration of pirate life. I don’t really see it as a condemnation of pirate life, either. Instead, it falls in a grey area in between, almost a way of saying: “Hey, you know everything that seems fun in the middle? It’s actually not good…but enjoy it anyway!”

Everything that follows is more about offering clever vignettes of wacky stuff pirates do than about telling a linear story into their fall. I doubt that the actual intent with the narrative arc was to give moral heft to the attraction; it was likely for the sake of pacing and building up to the ‘big reveal.’ From that perspective, the question for me is whether ‘wackiness’ is enough to justify a scene like this?

The strongest argument in favor of modifying the scene to something that does not showcase the subjugation of women is changing social norms. While the scene is explicitly depicting human trafficking and sex slavery, I think casting the auction scene as problematic solely in that light misses the point. Most guests are probably not concerned about these heinous acts being normalized for their kids.

Even as bad as those things are (and likely would not be kosher in an attraction built in 2017), I don’t think their depiction is what bothers people about this scene. Just like other “bad acts” in Pirates of the Caribbean, there’s little danger of the normalization of crime and violence by virtue of exposure to Pirates of the Caribbean–we can all agree those are bad things.

I think it’s a false equivalency to compare the auction scene to, say, the scene with Carlos that could be viewed as waterboarding (a comparison I’ve seen made repeatedly online since this news broke). The controversy surrounding the auction scene is not simply about an act, in isolation, that is bad. It’s about how guests perceive and internalize the act.

In the case of waterboarding, there should be little impact (unless, I guess, you’ve been waterboarded before?) on most guests. I don’t think the same can be said for objectifying women. I’m no good at math, but women are probably like half the world’s population, give or take.

The cumulative effect of casual sexism on women is an issue that is now, rightfully, in the public spotlight. What passed in the 1960s as an innocuous gag we now understand could be viewed to normalize misogyny and the objectification of women. While it’s recently become clear plenty of men yearn for the ‘good ole days’ of the 1960s, I’m not particularly keen on societal regression. Just because something was viewed as “okay” for decades does not mean it was, and will always be, okay. Times change.

As someone who has never experienced the ill effects of misogyny, I feel like this is a scenario where it’s not really my place to offer a value judgment on how the redhead auction scene does or does not impact other guests. I don’t know what that’s like to experience the world as a woman.

Even as I want to be able to justify this current auction scene to myself as being important because of artistic integrity or the history of Disneyland and pop culture (and that is exactly what I did as recently as 5 years ago when addressing the topic), I have come around to the perspective that this is selfish. I picture a hypothetical scenario: I have a young daughter, and after experiencing the attraction, she asks about that scene. What do I say? Even if she doesn’t say anything, do I proactively address it? To be honest, I have no idea.

As much as I value my nostalgia and iconic aspects of classic attractions, it feels “right” to err on the side of not reinforcing sexism. The iconic characters will still be there. The attraction will still focus on the pilfering of pirates.

I’m going to open this topic to reader comments, but I want to reiterate that I expect this to be civil. Besides, as persuasive as inflammatory rhetoric, devoid of reason is…actually, it isn’t persuasive at all. If you have a point to make, articulate it logically, and don’t insult others.

161 Responses to “Pirates of the Caribbean Redhead Auction Scene Changing: the Debate”