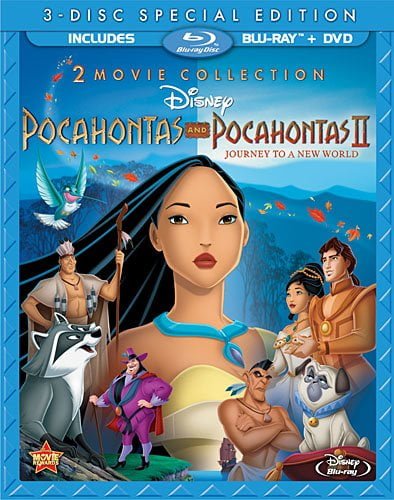 Pocahontas and Pocahontas II is one of the latest 2-movie Blu-ray sets from Disney. Unfortunately, unlike The Rescuers 2-movie pack, only one of the movies here is worth watching. Of course, that movie is the original Pocahontas, which was released at the tail end of the Disney Animation Renaissance, and doesn’t receive nearly the fanfare of films such as The Lion King, Aladdin, Beauty and the Beast, or The Little Mermaid. Still, it’s quite good. By contrast, its direct-to-video sequel is not even worth watching. That disc makes a better frisbee for your dog than it does a film to watch. Honestly, I’m actually a bit surprised Disney even bothered packaging it with the far superior Pocahontas. The rest of this review will focus only on (the original) Pocahontas.

The video quality here pops, with vibrant color, rich blacks, and oodles of detail I don’t recall seeing in previous releases. The animation here is really quite impressive, perhaps the last Disney animated film of the era that had animation of this quality. Pay attention to the backgrounds, as you’ll notice a lot of stunning attention to detail that is crystal-clear in this release.

The sound is similarly impressive, especially during the musical numbers. Probably in part due to the musical range and number of “epic” scenes for an animated film, but I’d have to say this was the best test of my surround system of any Disney film I’ve recently watched. The 5.1 DTS-HD MA soundtrack is solid, well-mixed, and thuds with excitement during some scenes.

With the exception of a 12 minute extra called “Drawing Inspiration: The Lost Story of Hiawatha,” and the BD-Live Disney Vault (which contains other older extras…so it’s really not new), everything here is a port over from the old DVD. The new lost story extra is very interesting, but not alone all that compelling.

Overall, this Blu-ray set should be purchased by any fan of Pocahontas. However, others considering buying should not look at it and think they’re getting a “2 for 1 deal!” The second film is garbage, and is seriously not even worth watching once. The audio and visual quality of the original picks up the slack, making a compelling argument for any Disney fan with a nice home theater system to make the purchase.