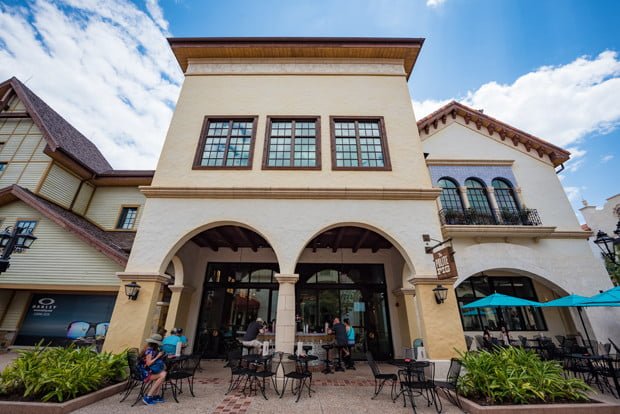 Disney Springs has seen a well-documented boom in the quantity and quality of restaurants in the last several years, something that has put it on the map for us as a must-do each trip for at least two meals. With so many new restaurants opening, there normally wouldn’t be much fanfare for a counter service restaurant. Sure, D-Luxe Burger and Blaze Pizza received a lot of buzz last year, but other ‘fast food’ restaurants have flown under the radar.

For the Polite Pig, the scenario was different. Rather than being the 3845th restaurant from a conglomerate, the Polite Pig is the sister location to the Ravenous Pig, a gastropub in Winter Park, Florida created by a husband and wife team. I had heard unanimously rave reviews from everyone I know who has dined at Ravenous Pig, and that plus the local, family-owned nature of Polite Pig really had me excited for it. Unfortunately, it did not live up to our expectations…

First, let’s start with what the Polite Pig is. I classified it as counter service before, but that’s not entirely accurate. It’s part of the growing fast casual restaurant movement. 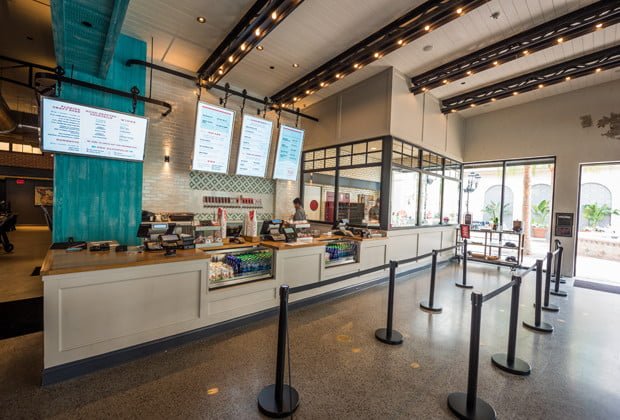 In this context, that means you order at a counter, go sit down, and someone brings your food to you after wandering around searching for you for a couple minutes, never to be seen again during the course of your meal. In exchange for this wonderful service, you “get” to tip!

Oh yes my friends, fast casual is the way of the future. 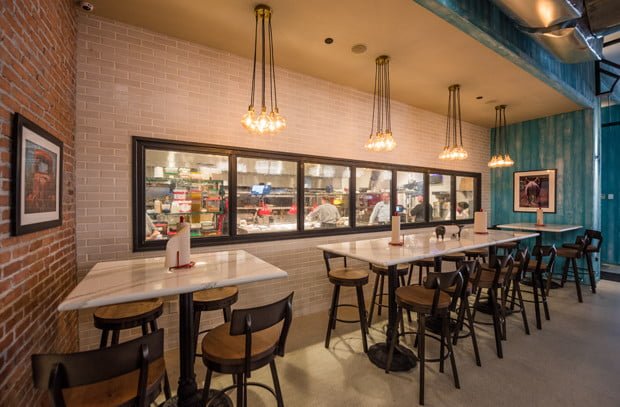 I know Disney blogs are where people come for hard-hitting viewpoints on social issues, but I’ll still spare you my take on the United States’ antiquated tipping practice.

Just keep in mind while perusing Polite Pig’s menu that you’ll be adding 15-20% on to those totals, which makes the already high prices even higher. 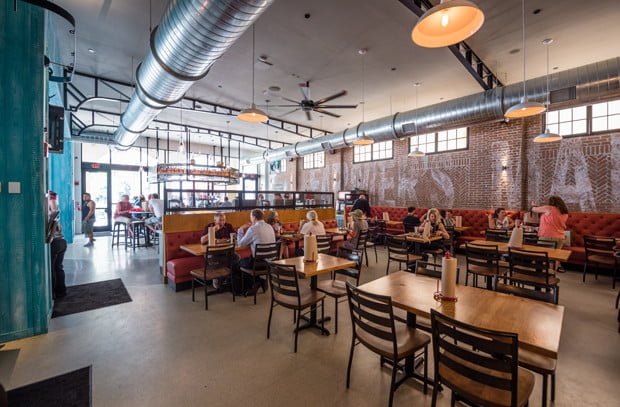 Thematically, I guess you could say the Polite Pig is “streamlined hipster” with a pig motif and some very light flourishes of Southern charm.

Note: I just made up the term streamlined hipster, and even I don’t know what it means. Basically, there is no theme. It’s fairly nondescript, but “feels” a lot like any ole hipster restaurant.

Decades from now, anthropologists are going to wonder why so many designs were created in such a similarly boring style.

Let’s move on to the food… 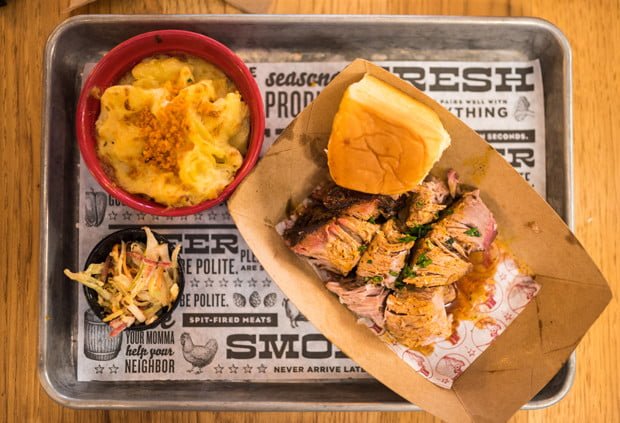 Noticing that the menu prices for the sandwiches were without a side (add another $4 for one of those), we thought we’d “cleverly” order items “From the Smoker” (which include a side) to get more bang for our buck. I chose the Brisket and Sarah chose the Pork Shoulder.

When our order arrived, we were a bit shocked to see the portion sizes. If ever you’ve complained about the dishes at the Epcot International Food & Wine Festival being “too small” then I can tell you right now, the Polite Pig is not for you. This is BBQ served on cardboard, not a multi-course meal of meticulously-plated haute cuisine. 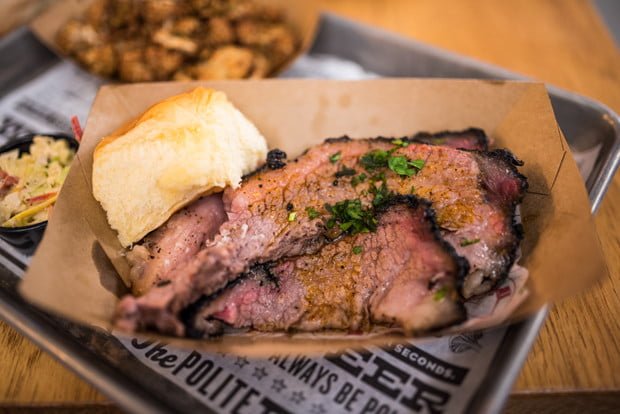 To compound this disappointment, no less than half of my brisket was fat. I get that brisket is a fatty dish, and some trimming to taste comes with the territory, but that’s the reason why brisket is generally a larger dish. Moreover, some degree of trimming usually occurs in the kitchen.

The portions of my dish that were edible were fantastic, and the coffee rub added tremendous flavor and texture…but this should’ve never left the kitchen with that much fat on it. (To put this into perspective, the Le Cellier filet mignon I had at last year’s Food & Wine Festival was larger than the edible portion of this dish.) 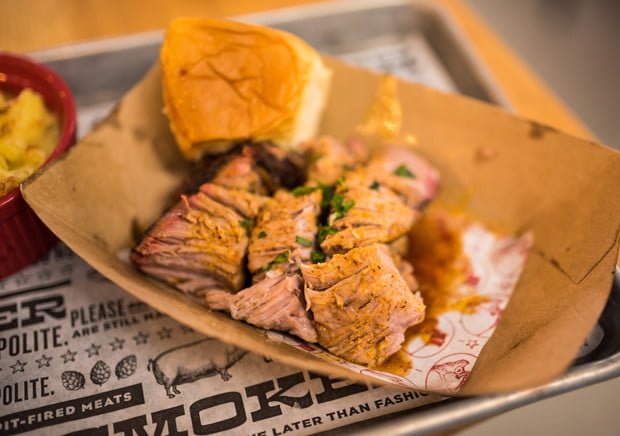 Sarah’s Pork Shoulder was similarly a very small dish; fortunately, it did not have this issue with fat, but it did have its own issue with taste. The meat was dry and lacking in flavor.

We remedied this with some of the Polite Pig’s delicious BBQ sauces, but that misses the point. I don’t think it’s too much to ask to expect to be able to enjoy meat–especially at these prices and portion sizes–without “enhancing” its flavor with a liberal application of BBQ sauce. 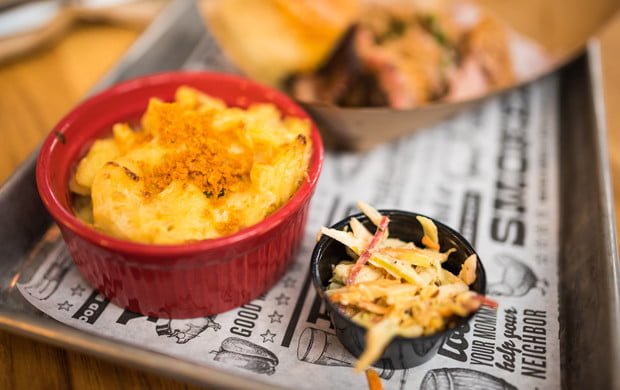 The sides were a totally different story. For mine, I ordered the Mac & Cheese with Aged Cheddar and Breadcrumbs. This was fantastic. A comfort food staple, this was rich, creamy, and had an exceptional texture.

Honestly, I could see grabbing this as a heavy snack to tide myself over until a full meal (elsewhere) on a return visit to Disney Springs. 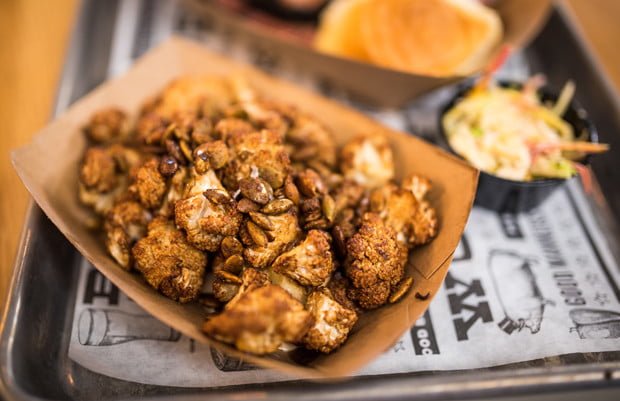 Sarah ordered the BBQ Cauliflower with Paprika Sour Cream, which she absolutely loved. Raved about it even after our meal.

I’m not the best judge of a dish like this, but I found it better than okay. Considering my stance on cauliflower is “not even if my life depended on it,” that’s basically a rave review. I still would never order it on my own, but I wouldn’t choose death over eating this entire side, either. Baby steps.

The rolls were also fine (the online menu calls them Texas Toast, but ours most definitely were not–more like a slightly more buttery version of King’s Hawaiian Rolls).

Altogether, it was not a particularly filling meal and we both left hungry. I suppose this was fine for us, as we intended upon ordering a variety of desserts afterwards at Amorette’s Patisserie (which never disappoints!), but it would probably leave the average Walt Disney World guest a bit miffed. 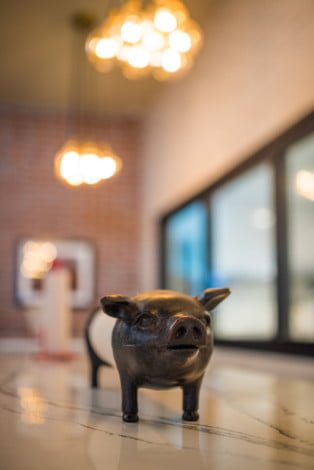 Part of me really wants to believe our experience was a one-off, or part of early operations growing pains. However, our meal was nearly two months after they opened, and portions & prices are not exactly “one-off” type of things. Sure, maybe we could’ve been unlucky with the fat on the brisket or the dryness of the pork, but even if those dishes had tasted perfect, we still would’ve left hungry, and after having spent a lot of money.

I’m still cheering for the Polite Pig to get it right. It would seem that the husband and wife team behind the Ravenous Pig would know what they’re doing considering the popularity of their original location, but maybe they’re spread too thin here? Or, perhaps they took Rizzo the Rat’s, “they’re tourists, what do they know?” advice to heart when creating this sister location. Given the prices, we are not exactly eager to find out–at least not until we start hearing more positive things about the restaurant.

There is one caveat to this review: if you’re on the Disney Dining Plan, the Polite Pig is an (objectively) excellent use of a counter service credit. No, it won’t make the portion sizes larger or flavor better, but it will take the sting out of the prices, which is a big part of the battle.

Moreover, if you’re already doing a table service dinner at Disney Springs (as you should), a light lunch is not necessarily a bad thing. I would not recommend the Polite Pig over D-Luxe Burger regardless of Dining Plan status, but that’s your obviously your call to make. (Even I would disregard my own advice if I had a counter service credit to burn on those St. Louis Ribs.)

If you are not on the Disney Dining Plan, I think doing a light meal at Homecomin’ (read our Homecomin’ Review) or Boathouse (read our Boathouse Review) makes a lot more sense. There are comparable, low-cost menu options at each of those restaurants that present viable alternatives. You’ll have a better and larger meal, pay about the same price, and have a full-service experience.

Overall, the Polite Pig is a strong concept with less than stellar execution that fails to live up to both the reputation of its sister restaurant and, independently, the high menu prices it charges. When you can order a larger, better, and cheaper meal from a table service restaurant at Disney Springs, something is amiss. The Polite Pig needs to address at least one of those three variables, otherwise it will earn a “why bother?” response from Walt Disney World guests.